Yorba Linda, CA (03/19/2018) The Mint 400 is one of the biggest events of the year and this year is very special being the 50th Anniversary of the historical Mint 400 in down town Las Vegas Nevada. Katie Vernola was very prepared mentally and physically to take on the 300 plus miles of one of the most brutal races in America. Best In The Desert drew starting positions and she unfortunately received 48th out of 70 other Pro-Turbo competitors. The contingency was as busy as the mall on Christmas Eve. Most of the best off-road teams were there, companies had their vehicles on display, merchandise for sale, and Katie was busy with interviews and an autograph signing at K&N Filters Semi.

Race day began Saturday at the Primm Valley Resort, Katie and her co-driver Niko staged at 5am while the team headed out to their pits. The race format was two Pro-Turbos starting side by side leaving every 30 seconds. Katie quickly got off the line and charged past three other competitors just in the first two miles. The short course section zigzag back and forth in front of thousands of spectators and then headed out into the brutal Nevada desert. Between race miles 10-15, Katie and Niko passed another three UTVs and there was already five to six UTVs broken down in a very narrow rock section. Katie ran a good pace up until race mile 25 where they experienced a mechanical failure that violently ripped the steering wheel out Katie’s hands and put the 972 RZR Turbo on its passenger door panel. Niko informed the pits and got out to help racers around the vehicle. He grabbed the tow strap and was hoping a fellow racer could flip them upright so they could fix the damage and continue racing. Finally after tons of racers passed. Ashley Burton pulled up to help get the rzr back on all 4’s. Katie and Niko made it to the pit where the team swapped out the damaged parts so they could continue racing. From the minor accident, Katie’s hand got caught on the steering wheel causing her to severely sprain her wrist. She made the call to continue racing but with Niko in the drivers seat and Katie navigating. Niko took control and pushed hard making up for lost time and raced the RZR Turbo to the finish line. After corrected time they finished officially 44th out of 70. Katie and Niko did finish and did not get a DNF which saved them on valuable points for the championship.

Katie’s quotes after the Mint 400:

“SuperATV’s parts held up great through the harsh Nevada desert.”

“The Gladiator tires are amazing, this is my second desert race on the same set with NO ISSUES OR FLATS! Make sure you check out their X Comp tires!”

“K&N Filters keep the brutal dust out of my motor and keep the turbo RZR running strong!” 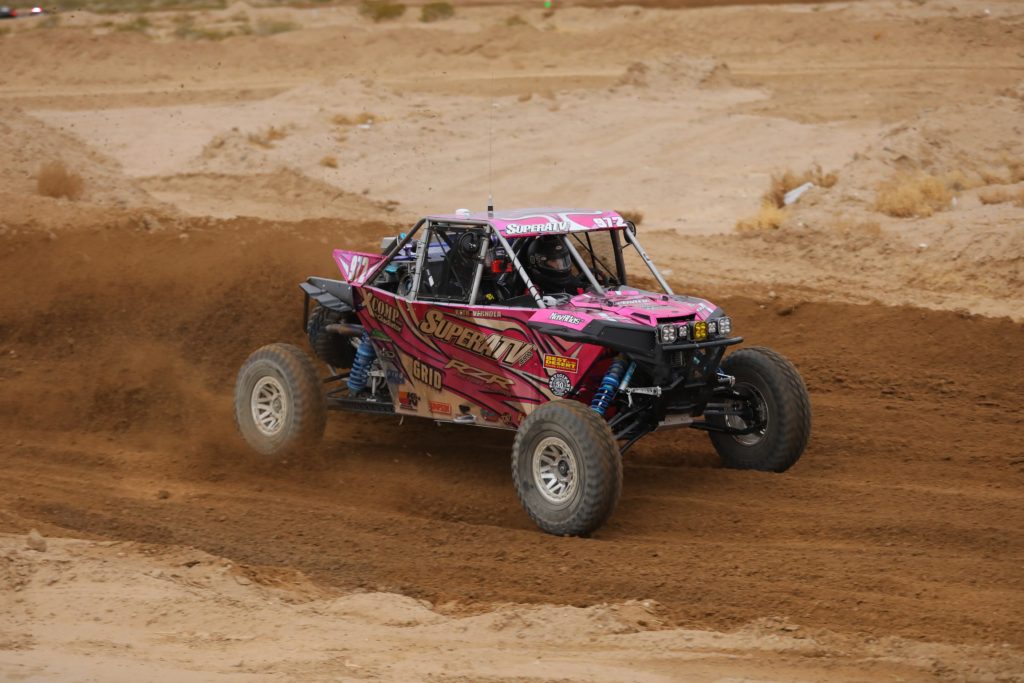 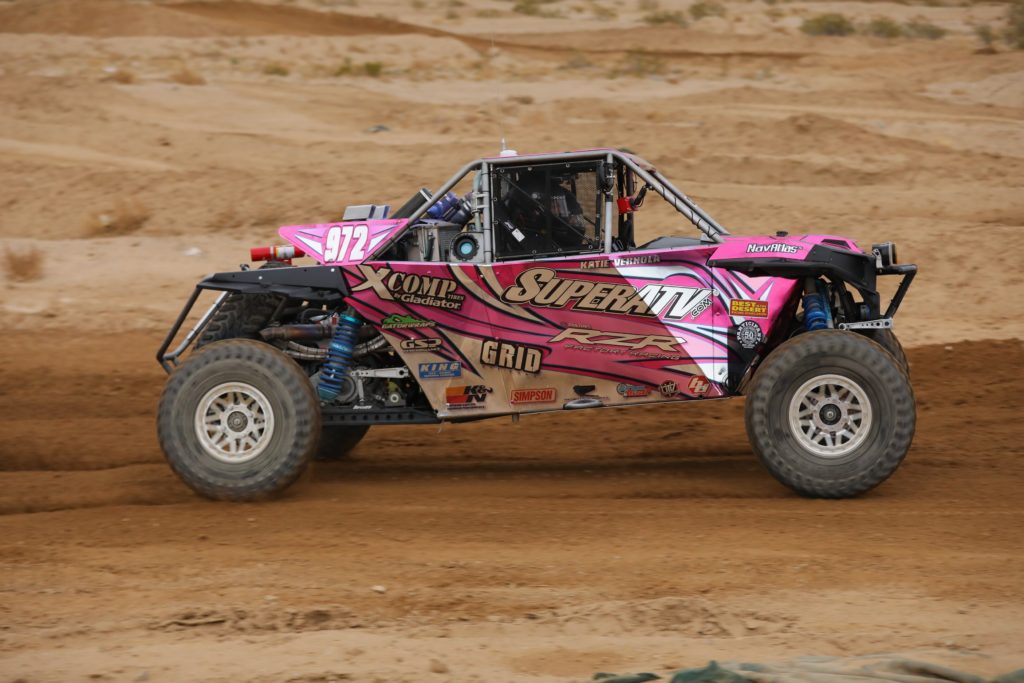 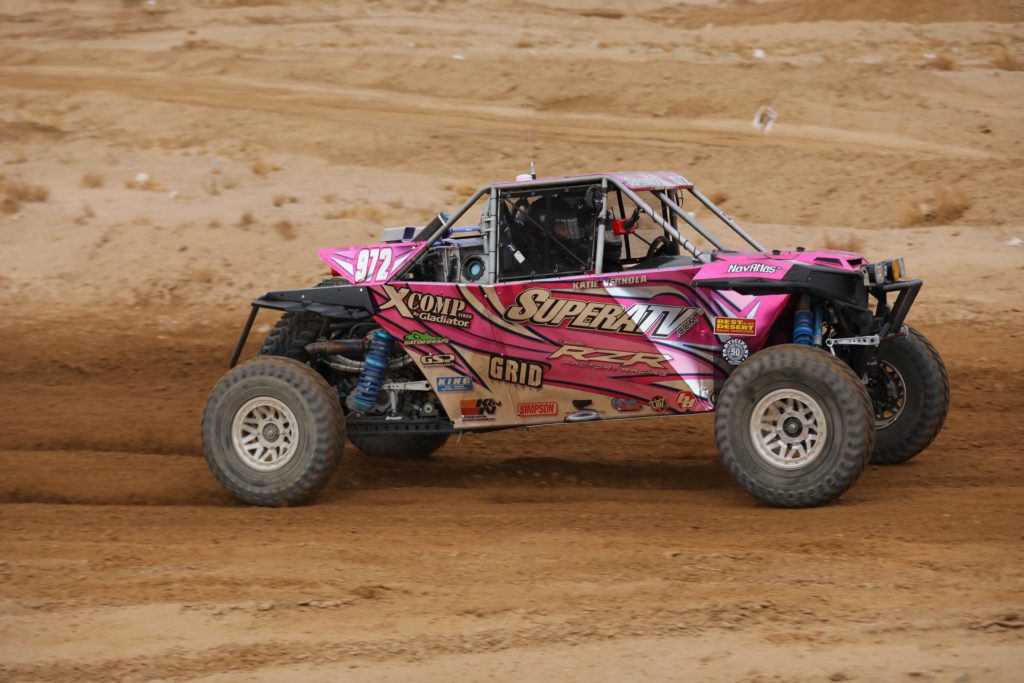 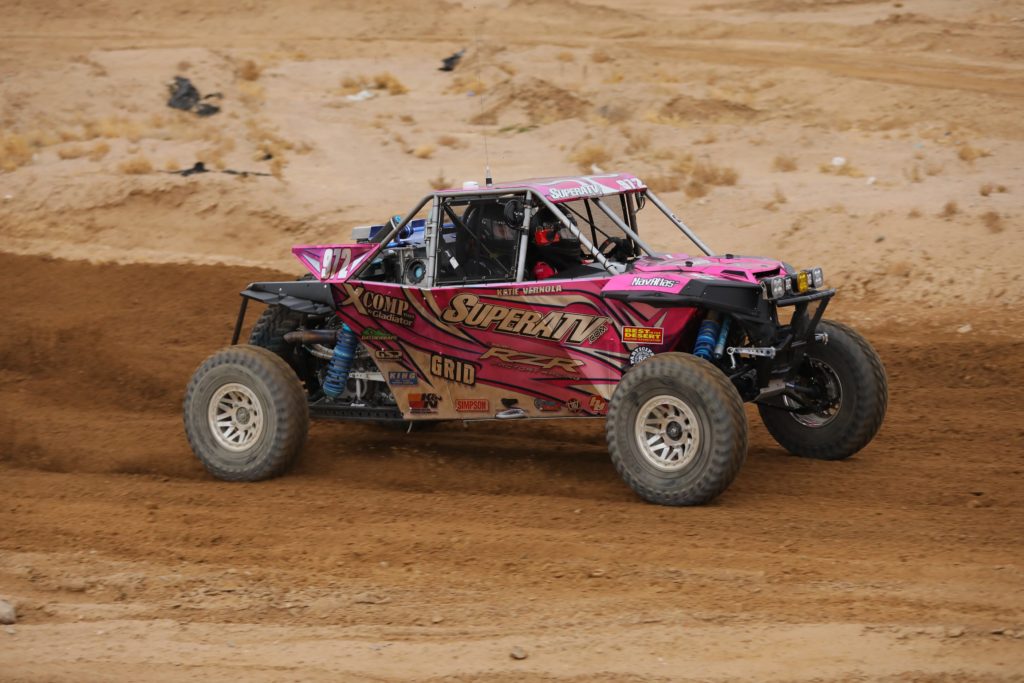 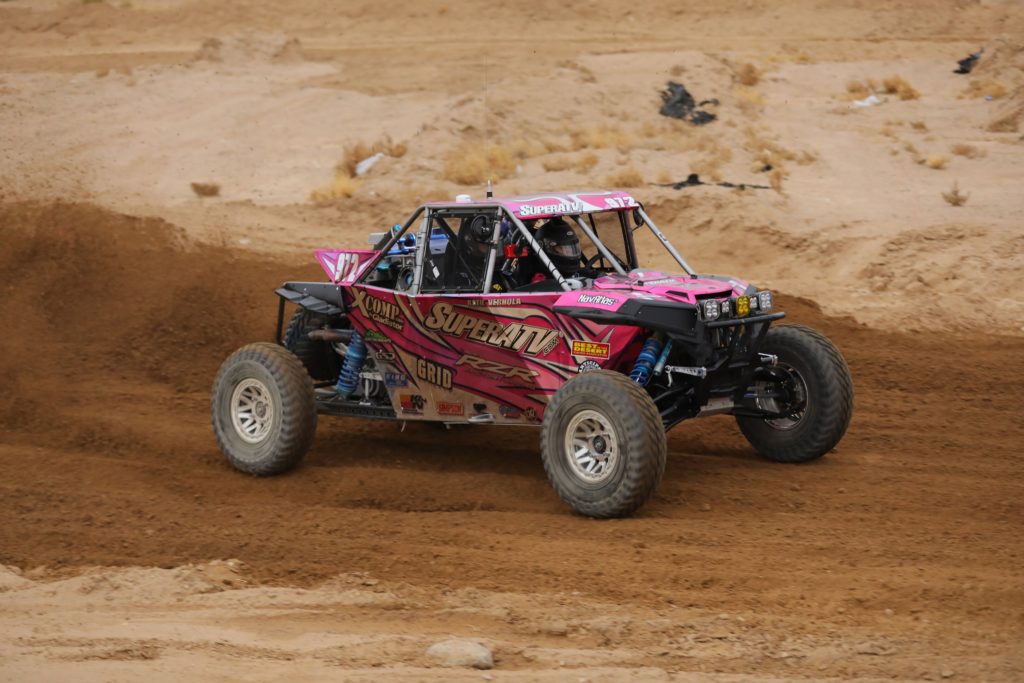 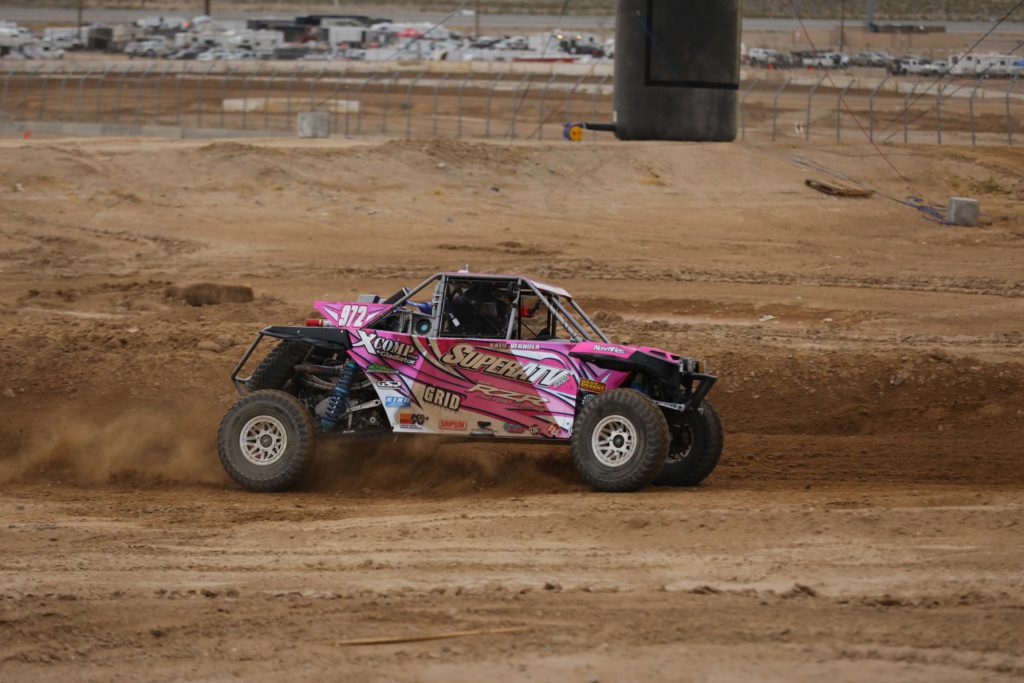 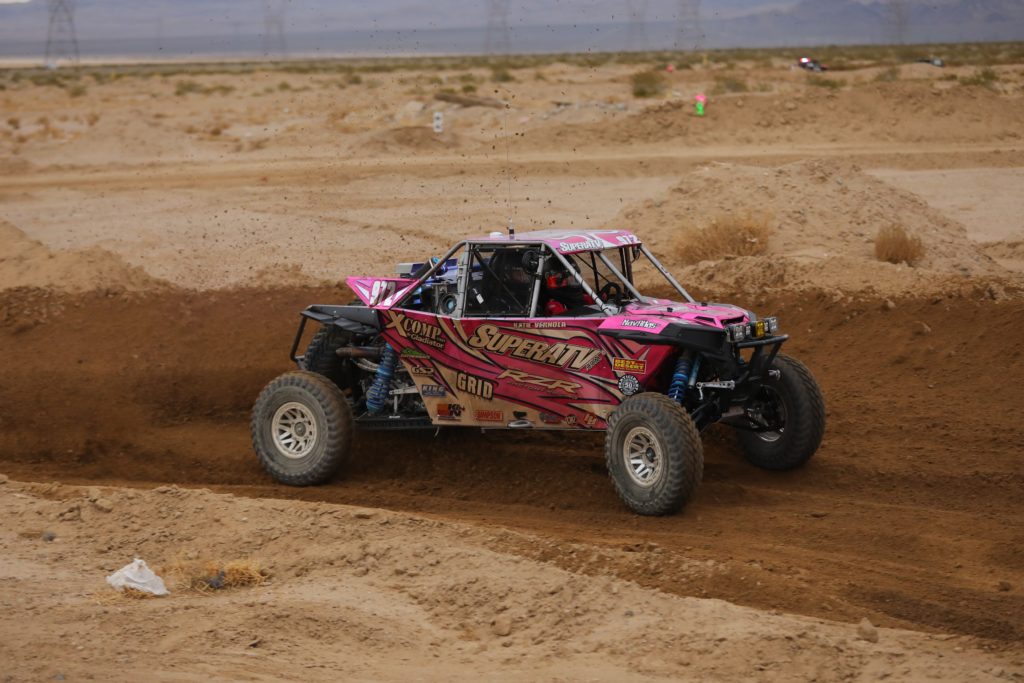 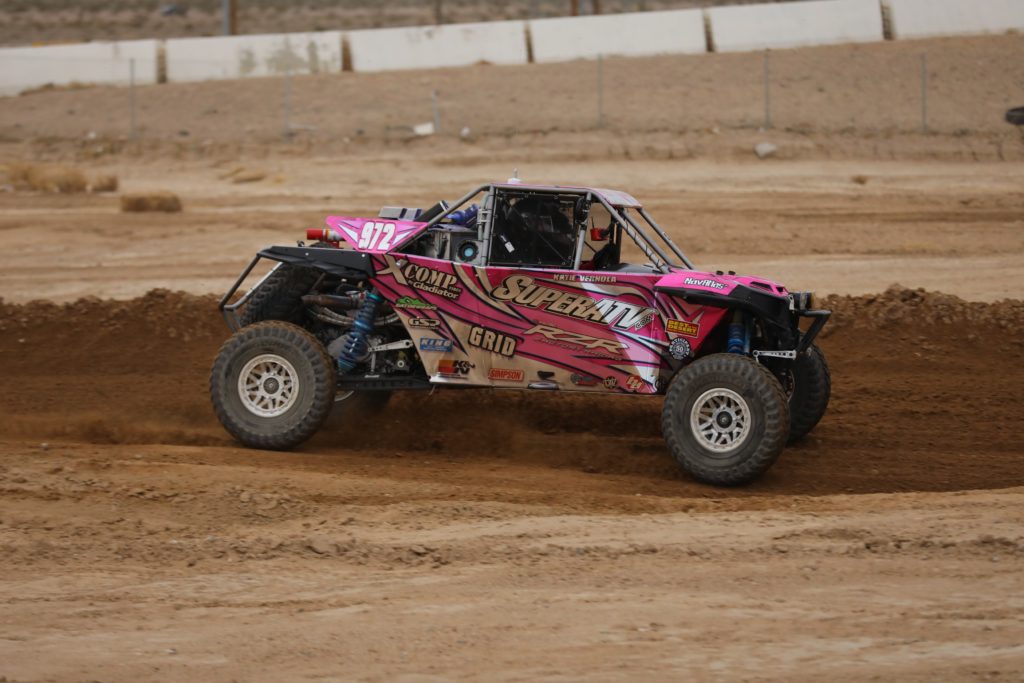 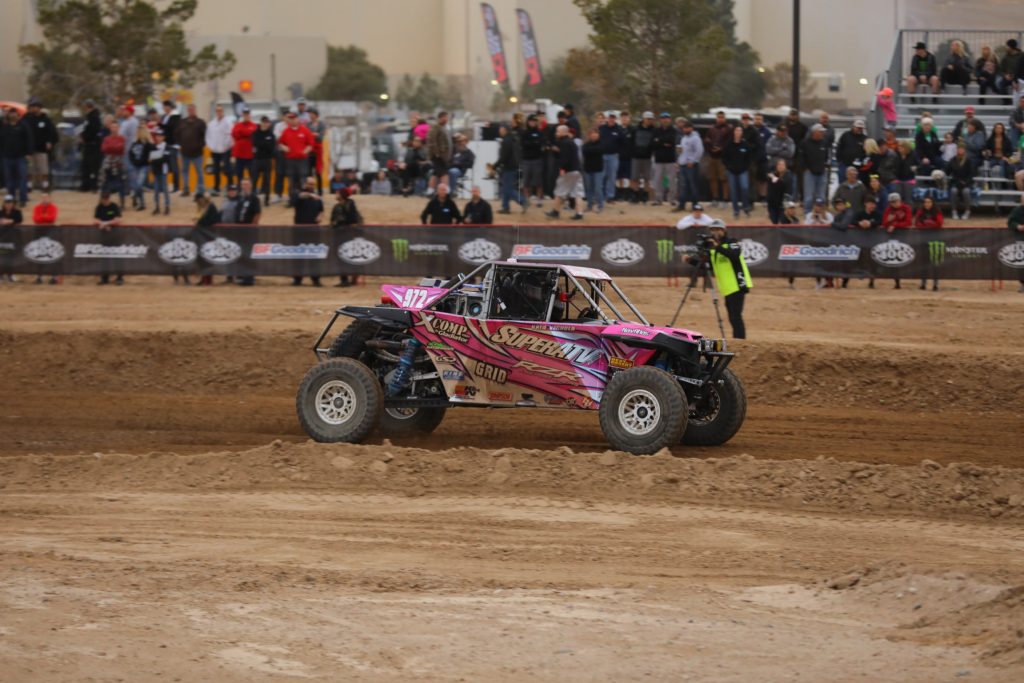 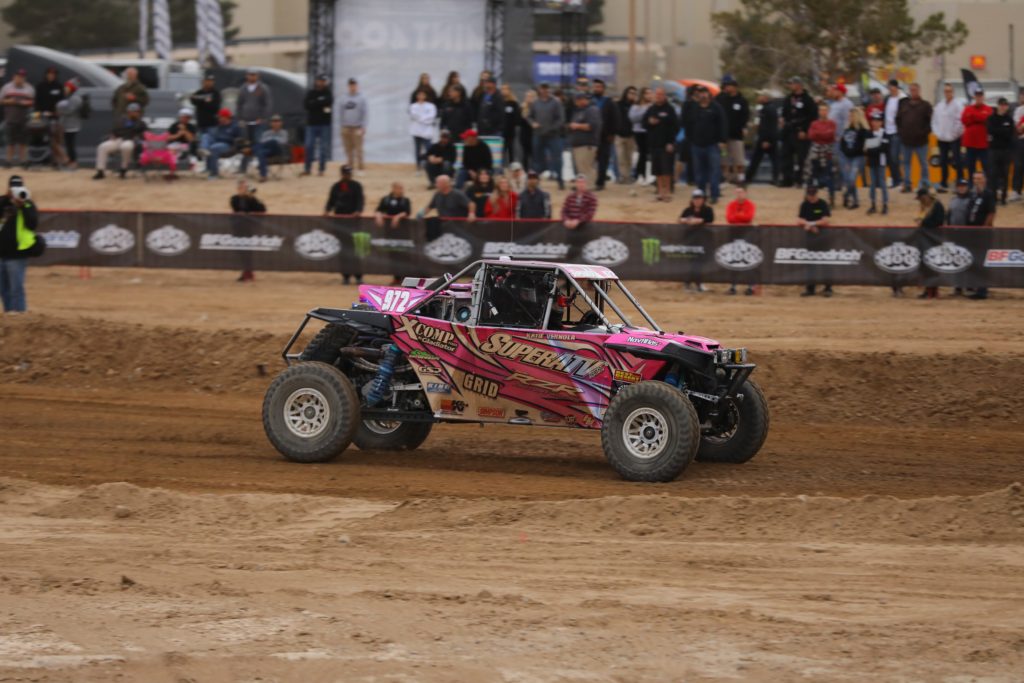