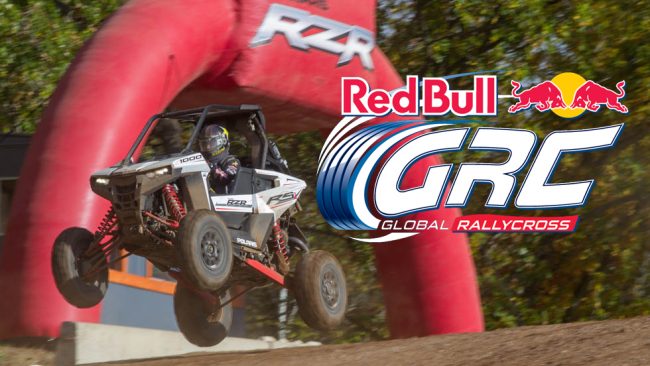 Los Angeles, CA (March 13, 2018) – Polaris GRC, the highly anticipated new class for side-by-side vehicles in Red Bull GRC competition, will feature the all-new Polaris RZR® RS1, the most agile RZR ever. This driver-focused platform is ideal for rallycross racing and will compete on the full schedule of the Red Bull GRC season in a 12-race championship.

“This class opens up GRC rallycross racing to a whole new world of competitors, and we’re sure that our future champions will be born in this class,” said Colin Dyne, Red Bull GRC CEO.

To prepare the Polaris RZR RS1 for GRC competition, certain modifications are required focused primarily around driver safety and making the vehicle ready for wheel-to-wheel GRC racing. All vehicles must be fitted with the Polaris GRC Competition Pack, developed in partnership with PJ’s Performance in Scottsdale, AZ headed by off-road, Indycar, IMSA and NASCAR driver PJ Jones. The Competition Pack includes a custom roll cage, racing seat, wide-track suspension, brakes and performance modifications and is available on a first-come, first served basis for $28,500. The series will open reservations on March 13th for all interested parties.

Polaris GRC will also be fully supported with trackside service provided at each round of the Polaris GRC championship featuring technical assistance and spare parts available to all competitors.

With one of the best media packages in the world of motorsports, all Polaris GRC rounds will be aired on NBC television and a soon to be announced Turner digital platform. Fans can also follow all the action and get live timing and scoring updates through the GRC app (available in the Android and Apple app stores under: GRC Series), social media (Facebook, Twitter, YouTube and Instagram) and the series website www.redbullglobalrallycross.com.

The 2018 schedule for the Polaris GRC championship is as follows:

About Red Bull Global Rallycross
Created to produce the most exciting action in all of motorsport, Red Bull Global Rallycross combines the best elements of stage rally, off-road and circuit racing in a fan-friendly environment. International superstars battle wheel-to-wheel over dirt, gravel, and the series’ signature 70-foot jump. For more information visit http://www.redbullglobalrallycross.com.

Was ready to see the RS1 in action on that. Will have to see what else will take place now.