WARNING Chaparral will not return deposit on SxS

Stroke of Power said:
I had one of the best purchase experiences with Art at Bert's. His word is good as gold. All sales guys should take lessons from Art.
Click to expand...

I second that, he gave me an extremely fair price on a Maverick. I drove 5 hours to pick it up and he had me out of there in 30 mins.
(not counting the hour I spent drooling over all their inventory)!
Great guy and great dealership!
J

desertwheeler said:
Even better reason to not buy from them. I know they are expensive. I have already talked to art at Bert's and plan on buying their when the time is right.
Click to expand...

Back in the day, like way back in the early 90's when Chaparral was in a building about 1/20th the size they are now you couldn't beat them. Now they are lost when it comes to working with their customers.

I am a huge supporter of Bert's and especially Art Wood. I bought my XP from Art and I have referred him to several friends and relatives who have purchased from him... Good luck with the Wildcat they are a pretty awesome buggy that's for sure
E

If I were you I would contact your credit card company and dispute the charge and provide the circumstances. Chaparral would have a tough time proving damages if the sold you a Maverick they didn't have. The deposit was to secure your POSITION to get the Maverick it is pretty certain that they sold the Maverick you didn't buy and therefore they were not damaged.
J

I'm going to go out on a limb here and say they are having a major cash flow problems. The L&MC Supercross team whose title sponsor is Chaparall closed yesterday after Chaparall failed to meet their contract terms. L&MC was ran by Larry Brooks and Jeremy Mcgrath and sponsored Andrew Short as a Rider.
N

JThomas7 said:
I'm going to go out on a limb here and say they are having a major cash flow problems. The L&MC Supercross team whose title sponsor is Chaparall closed yesterday after Chaparall failed to meet their contract terms. L&MC was ran by Larry Brooks and Jeremy Mcgrath and sponsored Andrew Short as a Rider.
Click to expand...

Before you claim the closing of L&MC was due to Chaparral failing to meet contract terms. Pleas share where you read that?

The closing of L&MC (Team Chaparral) started at the beginning of 2012. When this team was formed they had San Manuel Casino as their main sponsor, and were assured this was going to be a long term sponsorship. Then at the beginning of 2012 San Manuel's tribal counsel went through management changes and the new management did not want to continue racing sponsorships and pulled out.

It was Chaparral stepping up that kept the team alive for 2012. The Chaparral sponsorship was much less then what San Manuel's sponsorship was, but L&MC hopped they could find additional funding to cover the difference. When they could not find that addition funding Larry & Jeramey were going to be forced to spend their own money to cover that lost sponsorship.

Coming into 2013 they hopped they would find more sponsorship and with our economy not improving and sponsorships not found the team chose to close the doors. It had nothing to do with Chaparral not paying their bills. At least from what I have read and heard. If you know something different, please post up where you have found that.


Also L&MC is not the only team struggling. Just last week J-Star/JDR KTM team has said they too are shutting down. They are trying to finish out the 2013 Supercross season, and will fore sure close prior to the outdoor season opener. The father / son owned team have been funding the team out of their pockets as sponsorship has not materialized.


RacerX online has also said rumors of another team struggling could be forced to shut down before the Supercross season is over. Rumor was some employees had not been getting paid.
J

Woot I think my creditcard company is almost done with them...
J 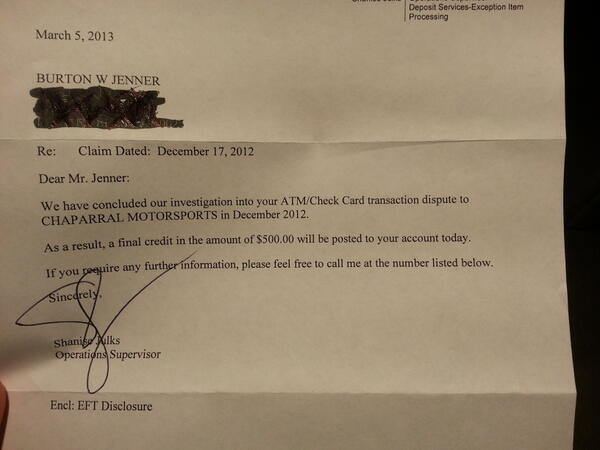 Hope it was worth it dumbasses....
M