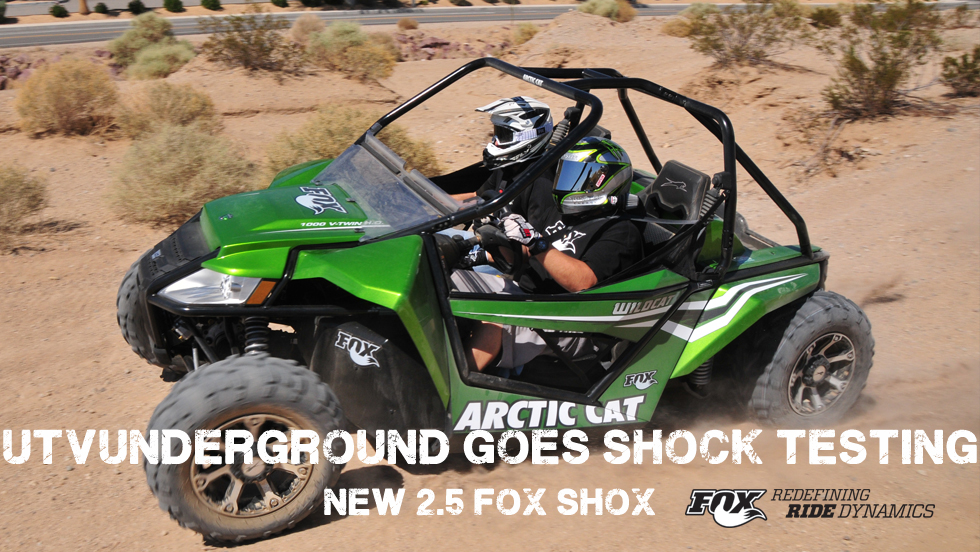 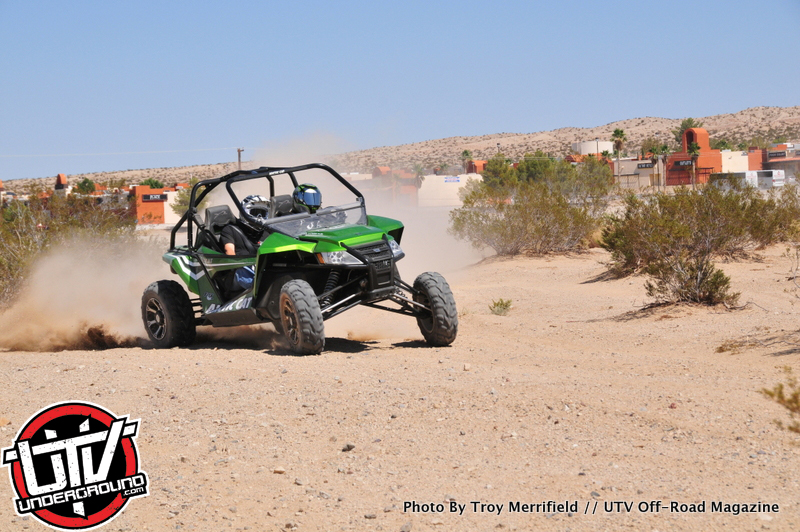 As off-road enthusiasts here at UTVUnderground.com when we hear the name FOX we tend to get excited. To us, FOX has elite status when it comes to suspension dampening and so when they call to give us an opportunity to test a new product, we jump! FOX invited UTVUnderground.com to come out to Barstow, CA the day following the Sand Sports Super Show to test a new 2.5″ shock they have developed for UTV’s. So with trade-show stuff in tow, we headed to Barstow to spend a warm summer afternoon putting this new shock they have developed for the UTV market to the test.

FOX along with Walker Evans Racing are the elite when it comes to OEM shock development. Its almost impossible to buy a UTV today without one of these top brands being provided on the vehicles from the factory. Obviously us as enthusiasts love that manufacturers have gone this route, out of the box we have shocks that not only work flawlessly but they are tunable and customizable per our riding styles. In the case of FOX you can find OEM shocks on everything from the Can-Am Commander to the NEW Maverick 1000R and on Polaris vehicles that include the RZR-S and RZR XP900. You can also find FOX shocks on the new John Deere RSX 850i’s both in a standard monitube design and in the Podium style piggy backs on the sport model. The hard work however is not stopping at the OEM level, racing and aftermarket is still very much a priority and making sure your FOX shocks are set up the way you want them too be is still very much a focus for the staff at FOX. To prove this FOX has remained on the gas in terms of developing new products for enthusiasts and racers alike. FOX understands that there is still a large niche of racers and enthusiasts that despite buying machines like the XP900 or Wildcat that come with awesome shocks, that they will still want to replace them or customize them. So with all that said, FOX has introduced us to the NEW FOX 2.5″ Podium-X line of shocks for your Polaris XP900 (2 & 4 seat) and the Arctic Cat Wildcat (rear only). 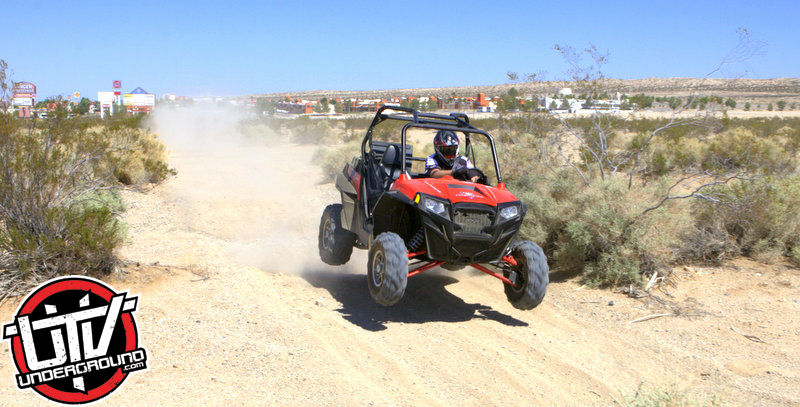 When we arrived for testing on Monday morning FOX and their entire UTV/ATV powersports team was on hand to introduce us to this new product. Only 3 outlets were invited to this initial test session and they included Troy of UTV Off-Road magazine, Jon Crowley of UTVGuide.Net, and myself (Joey D.) of UTVUnderground.com. We were not only brought out for our media work but also because of our extensive knowledge of driving and testing every UTV on the market. I don’t claim to be the most technical of guys but I do pride myself on spending the time needed to making my personal vehicles ride the way I think they should handle according to my riding stye, which is usually FLAT OUT!!  FOX wanted us to help them fine tune and confirm that what they have developed was in fact an improvement. It didn’t take long to realize that these new shocks were not only an improvement but also the future!

The morning started with a Q&A session which allowed us to ask questions in regards to this new product. It also gave FOX staff the chance to explain in depth the new 2.5″ shock and all its features, how they work, and why they think they are the best shocks ever developed for a UTV. One thing that caught my eye while being introduced to the product was the golden color that I had never seen before in the off-road lineup. This coating which is called a Kashima coat is a type of hard anodizing that helps eliminate friction inside the shocks which allow for better movement of the oil which in turn will help keep the shocks cooler. This Kashima coating is something that FOX has been using for a long time in the Mt.Bike, Snowmobile and ATV side of things and has been testing both in racing and in off-road applications on UTV’s. With a little more testing and some luck we hope to see a Kashima coated shocks for UTV’s available for purchase.

One we wrapped up our introduction we strapped on our helmets and got into the dirt where the fun is at, and where the work begins!

Bigger isn’t always better, but in the case of stepping your XP900 or Wildcat up from a 2.0″ to a 2.5″ shock it is certainly an improvement. Bigger shocks in a nut shell means more dampening which results in a better ride! We will say, shocks are only as good as their tune, just because we bolt a bigger shock on does not mean it will necessarily work better, this is where the experts come in with lots of drive time and “tuning”. A bigger shock body means larger pistons, larger shock shaft, and more shock oil which in turn results in less fade when running your shocks hard for long distances. It also means a bigger coil for controlling ride height and a larger reservoir which from an esthetics point of view is pretty cool, but from a functional standpoint means an increase in nitrogen (gas) and oil which in turn creates a cooler operating shock (better heat dissipation) with less fade.

It only t00k us 2 minutes in the RZR XP900 on our test loop in Barstow to know these shocks were better.  We have ran this loop with a few different machines and know where and when we need to let up and prepare for a G-Out. In the case of the new 2.5″ Podium-X shocks, those spots became far less and our confidence skyrocketed as we barreled through the desert looking to see just how much faster we could run this test loop.

As we ran both the Wildcat and the RZR XP900 that FOX had on hand for testing we found ourselves wanting to push the cars as hard as we could. We really wanted to see just how far we could take these machines with their new shocks. Soon we were finding just how well the internal Bottom-Out Control (BOC) technology worked. As we would bomb through deep and spaced out whoops we could feel that just before we would hit in the rear that the shocks would properly dampen the impact making for a surprisingly smooth transition from one large bump to the next. Of course there are some situations that no matter what you are driving and no matter how large your shocks are you are still going to bottom out, but with these shocks and knowing the terrain like we do these harsh hits became almost non existant. At one point we felt like we may have more shock then these machines can handle from the standpoint that when you have something making the ride this smooth you are only going to drive harder into this type of violent terrain thus putting stress on other parts of the machine. But for those of you who are like us and LOVE to go hard in the desert or in race situations these new shocks are amazing. 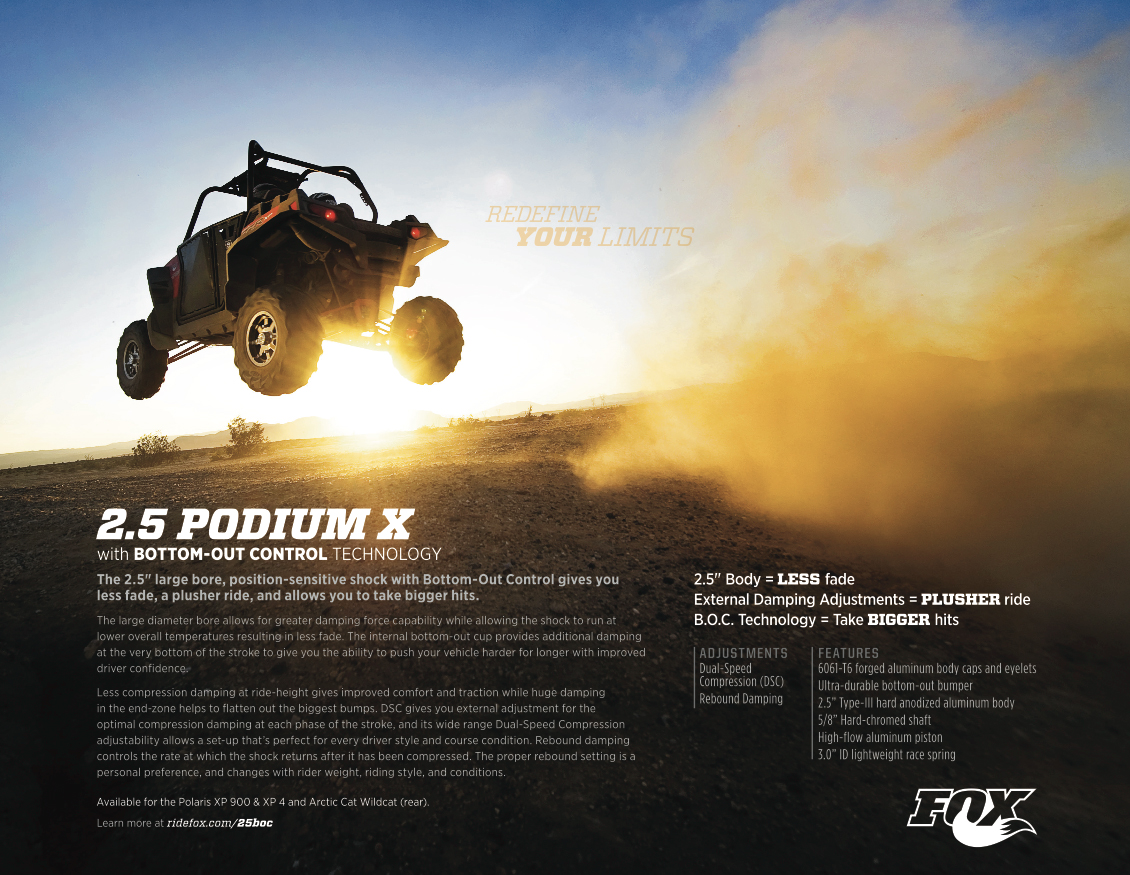 Because of the heat (weather) we took a couple breaks where we would head back to the FOX trailer to change things around a bit. We played with the included Compression and Rebound adjusters to fine tune to the high speed runs over the large whoops. What resulted was the most impressive shock set up we have ever felt in a recreational UTV. We could not have been more excited about the way these shocks worked and for those who want to improve not only their play machines but also their race machines then this upgrade, hands down, will make your race UTV a better one! 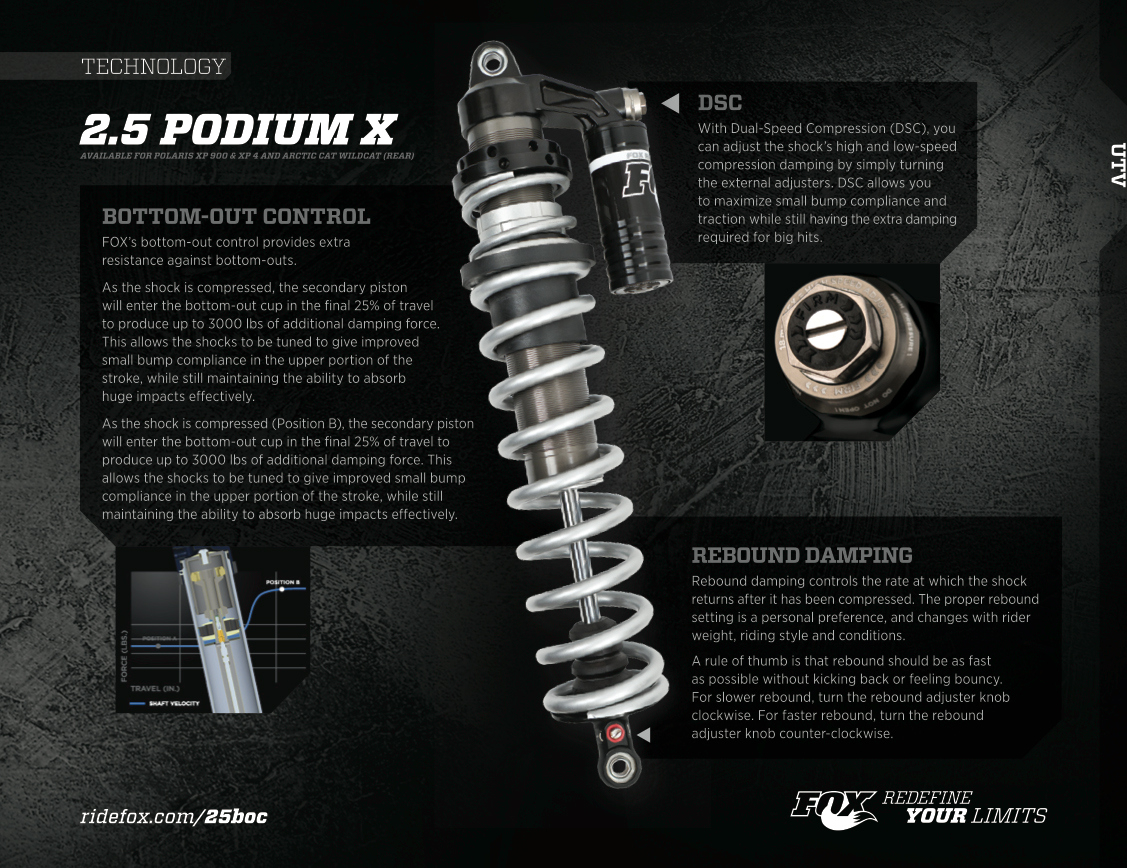 The bigger shocks allow for bigger jumps and higher speeds over these type of rough and harsh terrain, but in addition it also will take your smooth riding XP900 and/or Wildcat to another level of comfort. In conjunction with these new shocks has come the development of 3 standard shock settings that you can have placed into your shocks directly from FOX when ordering. These 3 settings RACE-DESERT-TRAIL allow you to have a solid base setting that favors your preferred riding style. From these settings you can then tune and adjust using the manual adjusters that come on the 2.5″ Podium-X shocks which will allow you to finely dial into the setting you so desire.  We will stress however to be careful and make sure you know what you are doing before you begin turning knobs as FOX gives you the ability to not only improve your ride but to also make it much worse should you not fully understand what each adjuster affects.

As our afternoon of testing wrapped I found myself thinking about how far UTV’s have come just in the past 24 months.  Shock improvements are a huge part of this progression, seeing guys like FOX so dedicated to our sport and hobby only helps increase the excitement for where we are going.  With FOX motivated on developing new products the sky is the limit.  It has me wondering, will we ever see a 3.0″??? Only time will tell….

For more information from FOX regarding the new 2.5″ Podium-X Shocks CLICK HERE