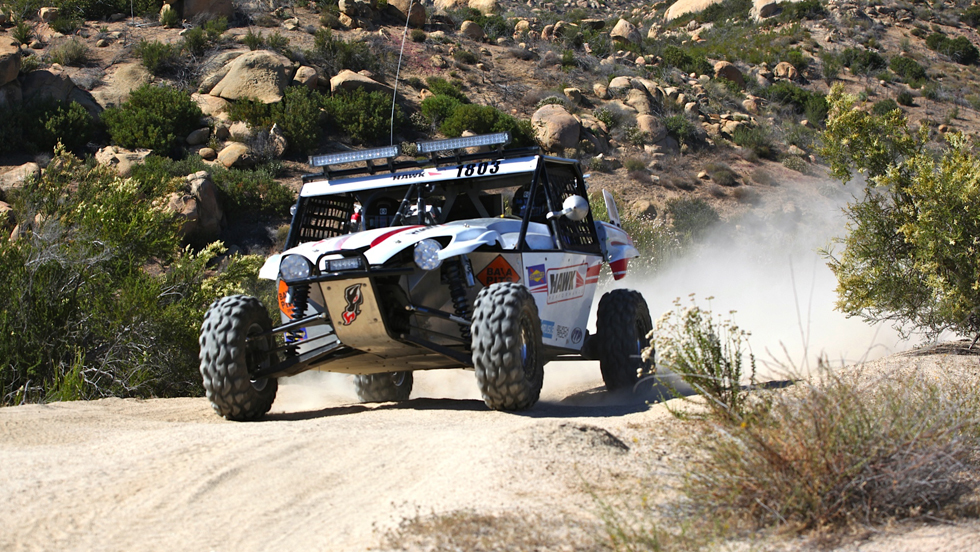 3 Year Old Idea Turns Into a Baja Dream
By Todd Romano for UTVUnderground.com

It takes risks to evolve, and desert racing is full of risk, with 40% of the 4 wheel field not finishing most races, ingenuity and design are what pushes the envelope, evolves the sport a makes racers out of dreamers.

That is what happened this weekend at the 2012 Tecate Score Baja 500. Todd Romano the founder of DragonFire Racing sold his company 4 years ago, but he did not give up on desert racing. His sponsors followed him and his ideas did not stop. For the past several years he and his sponsors Hawk Performance, Black Rock Wheels, ITP, Carlisle Motorsports, BFG, Kawasaki and Fox Racing have allowed him to continue to campaign his Class 1 car and Pro Bike Program. His sponsors wanted to participate on a higher level, and this level allowed him to recommend the build and design of a new type of Car.

At 1600lbs, All-Wheel-Drive, and just under 200 HP, this new desert racer proved its concept in this years Baja 500. They used the same CVT design found in todays current UTV’s, but with of the help of Carlisle Transportation Products, the development of the CVT and belt that they manufacture, was able to push this car in speeds of excess of 100 MPH!! The belt never faded, and never failed. In addition the ITP wheels and ITP Baja Cross Tires lasted the entire race, looking almost new at the finish. This is budget racing at it finest. Show up to the start line, push the start button, add gas every driver change or 150 miles, and cross the finish line. Simple, flawless and executed with nothing less than perfection.

As much of the concept was Todd’s the true credit goes to Gerald King (aka Smitty) and his team of Kevin and Nacho. They took an idea and built a race car in 30 days. At many times doubting the concept, and if the car would be finished in time. Some of the challenges were as follows:
– Buy a used Apex Snowmobile (you need all the parts from it, make sure you take the right ones)
– Design a drive clutch that can be splined to work on a Polaris 900xp Rear Diff. – Transform the diff to accept type 1 Cv’s.
– Have rear hubs and brakes kit that will mount to a one off trailing arm that accepts a coil-over and by-pass shock.
– Figure out how to mate a drive shaft to a front Polaris diff, and build new font axles that will work with one off spindles and hubs. Find a 20 Gallon fuel cell that fits between the driver seats.

Don’t forget all the aluminum and steel work that needed to go into this car.
Then Tune a motor that turns 11,200 RPM so it was drivable and would last. Not blow up a diff or brake an axle. Not blow up a belt, or take out an alternator. Do it all in 30 days, and then win the race.

Show up to Baja on Tuesday, Test the car, do final set up. Load the chase trailers and head to the starting line.

Chris Koch started in the car, Passed everyone, drove over a few cars in a bottle neck before Ojos, and handed off the car in pristine condition at RM 97.
Bob Viau then piloted the car over the summit and to Borego. The Car was a rock crawler up the summit, passing a bottle neck that had 12 cars stranded, and exceeding 90 MPH on the lake bed. The car was handed off to Todd at Borego.

With 18 inches of travel and a 100 inch wheel base, all but the biggest whoops proved to be effortless. The Gravel roads from Mikes Sky Ranch and the Coast proved to be the fastest sections allowing Todd to pass Trophy Trucks, C1 cars and Class 10. No one knew what was behind them, only that there were lights and they were coming fast. Cars pulled over and let the agile cars pass with both frustration and awe.

AT RM300 Hans Waage took the wheel and never looked back. Staying ahead of every C1 and TT that had been passed. Dealing with the biggest ruts and silt from RM380 to RM400. Starting last is a big disadvantage, but a true testament on the cars capabilities. The car never broke, never got stuck and ran perfectly to the finish.

Bob Viau and Smitty climbed back in at RM410 to take the car through the mud and stink water on the way to the finish. Figured we should have the builder of the car in the car of last 40. Good back up plan.

Never being passed back, the car that started dead last found it way to the finish, 100 miles and 3 hours ahead of its next competitor. Finishing 12th in TT, and 9th and C1. Making the podium or placing well in almost all the other 4 wheel classes to boot!