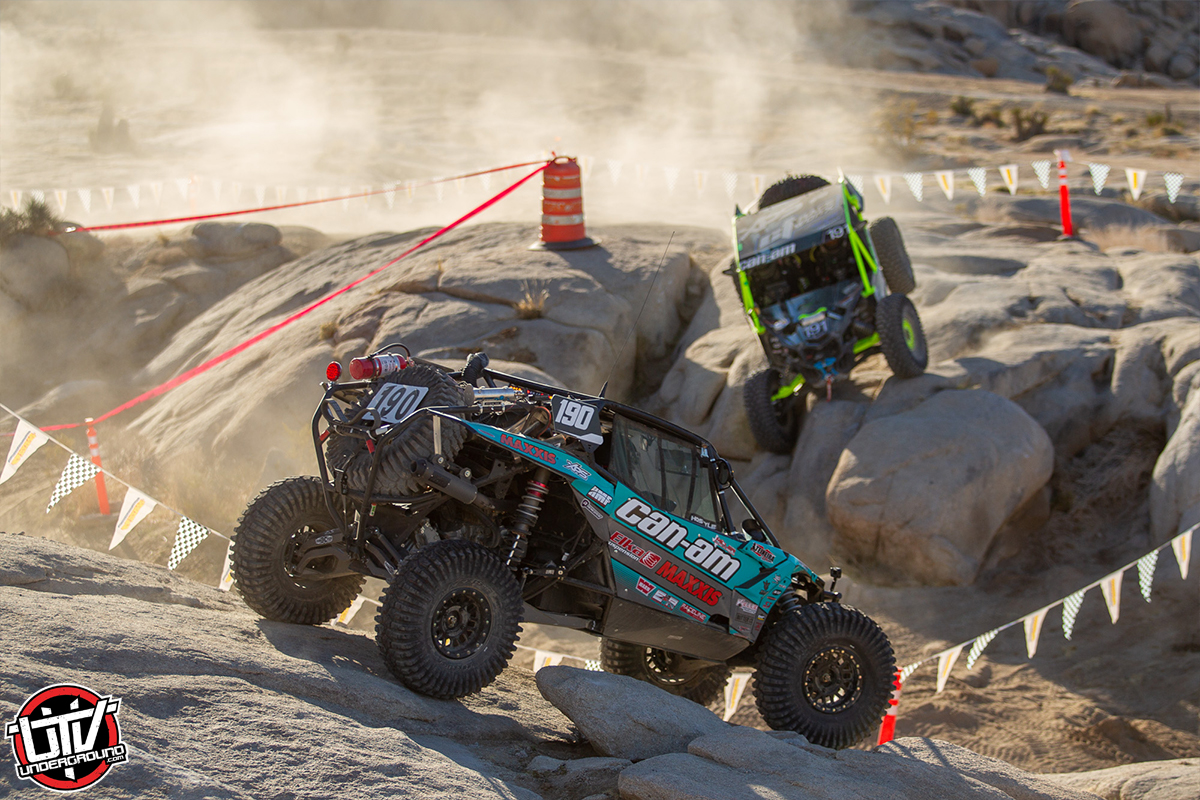 One of the toughest UTV races in the world didn’t just have a first-time winner on Sunday—it had a winner who had never even attempted the race before. GNCC regular Hunter Miller qualified second for this year’s Can-Am UTV King of the Hammers, just behind his brother Cody, and paid off that speed by scoring the win. Miller led fellow Can-Am racers Kyle Chaney and Phil Blurton in a sweep of the podium.

“Next to the day my wife said yes, this is the best day of my life,” Miller said at the finish line. “I was surprised at how hard it was.  It’s the absolute hardest race I’ve ever done in my entire life, and I’ve been racing for 25 years now, and I’ve never experienced anything like this. I mean, had it not been for my copilot Chad Hughes I wouldn’t have made it through, I’d be sitting out there on the trail for sure.”

The drama was heavy throughout the day, and perhaps no moment was more dramatic than Chaney’s rollover on a steep hill. After resetting the UTV on its wheels, it rolled backwards and ran over his leg, forcing him to finish the race in pain.

“We caught up to Hunter in the lakebed, and were going up the hill after the lakebed, and I thought the trail went right behind him,” explained Chaney. “I was in the dust and I went off of a cliff, and it rolled. Thank God we had a Pro Eagle jack to help get the thing up a little bit, and then we picked it up, and then the car kind of dragged me with it down the hill. And you know, it all kind of went bad from there. I was able to put it back together, and just get here to the finish.”

Six-time KOH UTV champion Mitch Guthrie Sr. was the top-finishing Polaris racer in fourth, while Nathan Wolff completed the top five. Just 33 of the 131 racers who started the event completed both laps, with a number of heartbreaking DNFs on the second lap for big names. Wayne Matlock, CJ Greaves, Bryce Menzies, and Dustin Jones were just a few of the additional 71 drivers that only finished one lap. While its difficulty level has never been in question, KOH proved its toughness yet again by defeating Brock Heger, Branden Sims, Johnny Greaves, and Shannon, Wayland, and Bailey Campbell before any of them could complete a lap.

Full results from this year’s Can-Am UTV King of the Hammers are as follows:

The 2020 King of the Hammers continues with two days of qualifying on Monday and Tuesday before four full days of racing. The 4WP Everyman Challenge headlines Wednesday’s events, with the Toyo Desert Invitational on Thursday, the Nitto King of the Hammers presented by Optima Batteries on Friday, and the return of Progressive King of the Motos to close things out on Saturday.