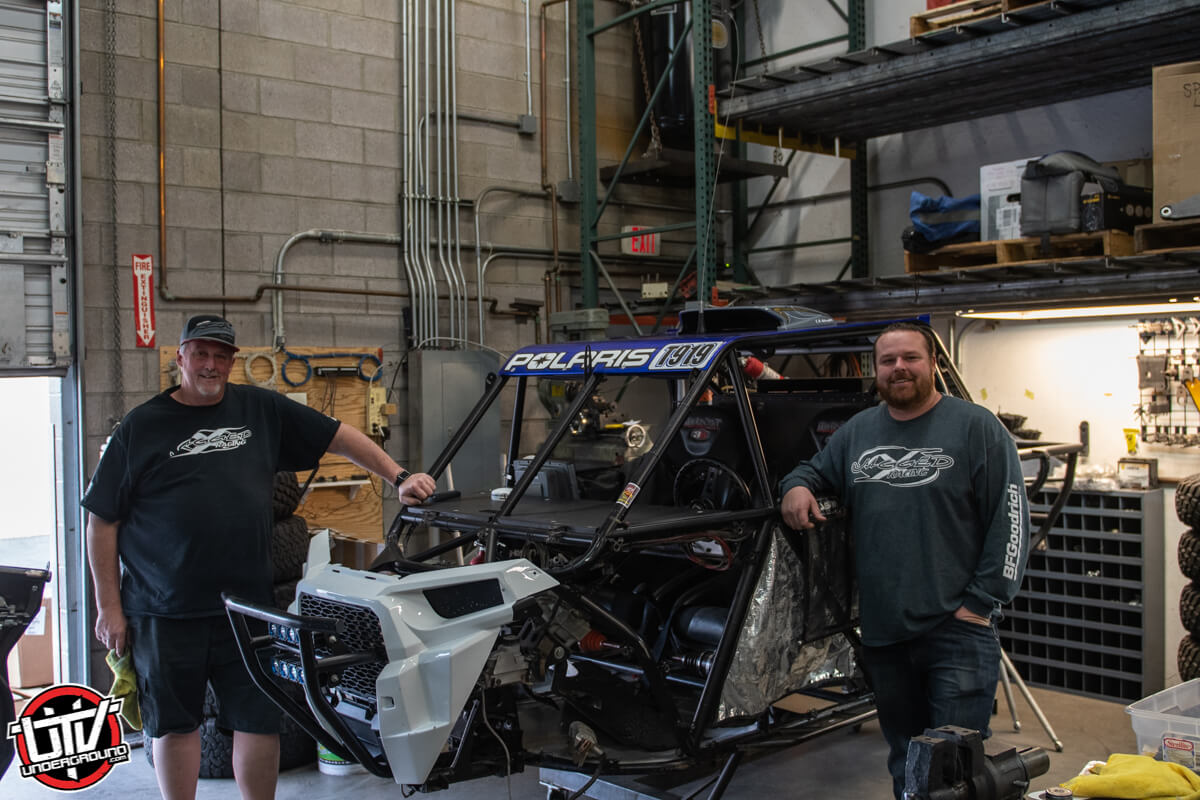 We got a chance to stop by Jagged X and get behind the scenes look on what it takes to run their race program. We also found out a ton of UTV racing history, and got a feel for what the early days of UTV racing were like.

Jagged X consists of Brandon Schueler and Bill Schueler, a father a son race team. Brandon does the racing, Bill takes care of the logistics to help Brandon get to the finish line.

How long has been Brandon racing? 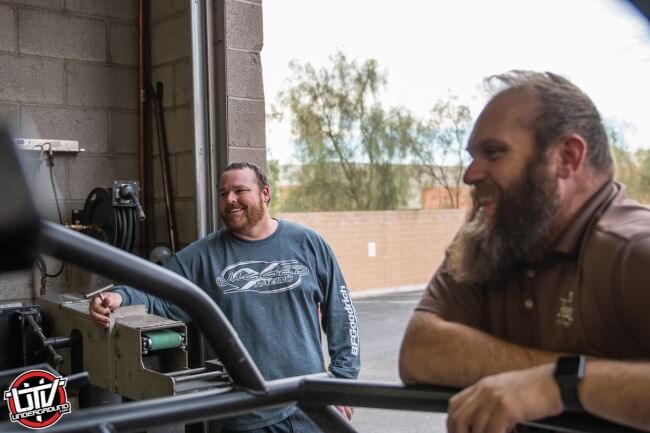 How did that change with UTVs?

Bill – So Justin(Brandon’s brother) and Brandon started doing fab work out of the garage basically when they were still in high school. They started working on jeeps and on golf carts and peoples quads and various different things. Just kind of learning some skills and whatnot. They both had a pretty good eye for fabrication. As that grew along came the introduction of the UTV, which started as the Yamaha Rhino and they were working on a lot of Yamaha Rhinos cause it was a real popular vehicle.

It was kind of the start of the whole UTV explosion, if you will. They were doing full custom builds on Yamaha Rhinos, and then suddenly a couple of guys started actually racing in various different races. When my wife who refuses to accept the fact that she’s competitive is actually competitive, but she just won’t admit it. She said one day “They’re racing UTVs??” Like, yeah, they’re racing UTVs “Well, if they’re racing UTVs, you guys should be out there racing to get your name out there” and that was a hall pass that the family needed. So within a matter of weeks, a Rhino that they owned had been converted, and basically dismantled and reassembled as a race car and was ready for its first race.

What was the first race Brandon competed in?

Bill – I think it was the first Best In The Desert Parker 250 that allowed UTVs, which I do believe was in 2006. There were 5 UTVs.

Brandon – I DNF-ed on lap two when I ripped an A-arm out of the frame. 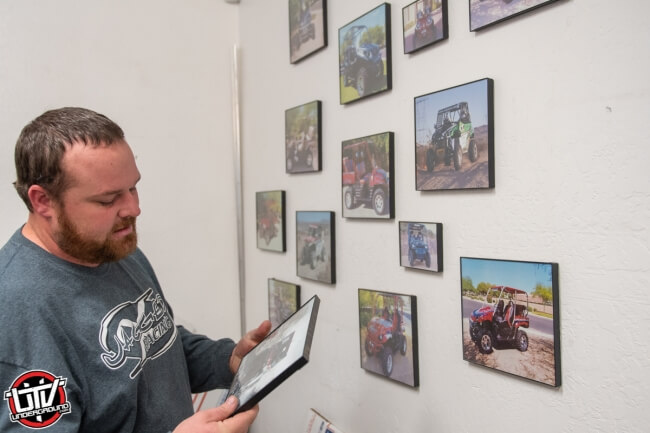 What made you want race in Best In The Desert instead of race series?

Bill – It was a much more organized venue and organization for racing. It seemed to get a little more national attention potentially. It was a bigger show I guess. We did race a few smaller races in different organizations, while they were fun, they were very disorganized and they seemed to be more of a, I guess a hobby weekender kind of a racing organization. We kind of saw the value in a better, more structured organization and Best In The Desert was already that. At that point we were trying to become the “go to”guys for UTV’s, we figured there would be more exposure with a larger organization, like Best In The Desert.

Brandon – The class was growing exponentially. There were five cars when we first started, and then the next race there were probably eight cars and then ten cars and so on. So it was expanding really fast. It was the premiere racing organization. No disrespect or anything to any of the other racing organizations, at that time SCORE wasn’t allowing UTVs. So that wasn’t an option, Best In the Desert was the best game in town.

Bill – To be honest with you and thank you to Cory Sappington, who was friends with the promoter, Casey Folks at Best In The Desert, and he kept on and kept on and kept on it. Then they actually formed an organization because the promoter, Casey didn’t really want, or didn’t really understand and didn’t really want to embrace the UTVs, to such a great extent. So, Cory Sappington, along with a couple other guys, formed something called the UTV RA, or UTV Racing Association, it was sort of an intermediator, an organization to kind of help build the rules and build the sport and you know, take the sport to the next level and actually get it accepted. UTV RA was actually in existence until just a couple of years ago, Finally Casey said, no, we don’t need UTV RA anymore. This is a legitimate class. Now it’s the largest class that we have and they can stand on their own. 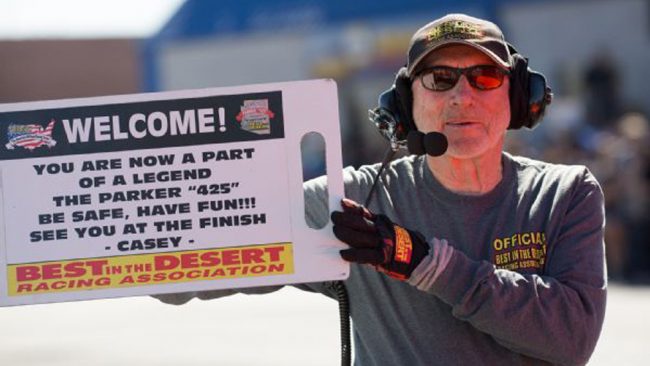 Has Brandon competed in any short course races?

Bill – No, it’s because our schedule between racing, once we started racing Mexico, that added several races a year to our schedule and our schedule got to where it’s just not feasible. This year we are doing King of the Hammers, that’s a standalone race, I mean it is part of a series, but it stands on its own as far as, uh, you know, a big event. Yeah. So we’re doing that race. We want to represent Polaris and represent our sponsors and hopefully win.

Has Brandon ever raced King of the Hammers?

Bill – Actually yes, when they started racing UTVs at King of the Hammers, we were at the very first one, the first year they allowed UTVs. We raced three years in a row. Brandon finished third his first year, then second, and then his last year that he raced he won it. Granted there were way less cars then, you know, but there was still a bunch, I think the year he won, I think there were 40 or so cars, it was still a pretty big field. Since then we

just have not really been able to fit that into our schedule and have a car dedicated to race to King of the Hammers. We started supporting Brandon’s co-driver Blake Van De Loo, who wanted to race that as his own standalone race. So we were supporting him. We supported him for the last several years And Blake won the race the year before last , and now this year we’re back at it and fielding a car of our own.

What made you guys want to race the Baja races?

Bill – We were actually persuaded by our sponsor Polaris to go and race in Baja. We’ve been called out by several other teams that were racing in Baja. Basically they were like “Hey, if you guys think you guys can race, you guys need to really, need to come down and race in Mexico cause that’s the real deal” and so we went down to Mexico. The first year we raced in Mexico was 2013, and we won the series ha ha.

Bill – The first year that we went down to Mexico, we actually formed another team basically within our team. So we had two squads, if you will. We had a Mexico squad and the US squad. Brandon racing here in the states and Matt Parks who was a previous employee of Polaris and a veteran Baja racer. We basically worked a deal with him to be our driver of record in Mexico. 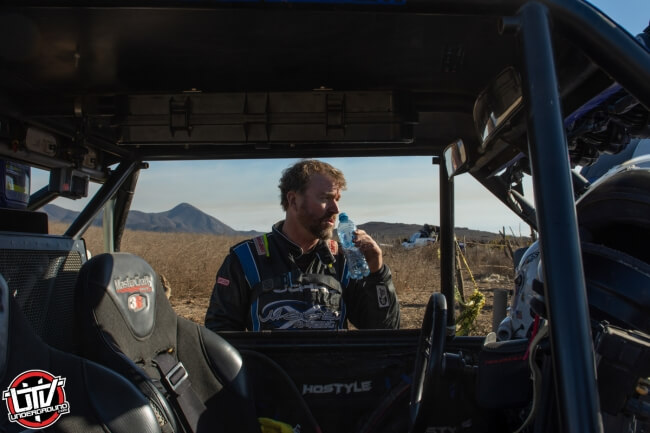 Bill – Plus we had two cars that we were racing against each other and it was, a little bit of a conflict, but it was a lot of work too. We were trying to race both those two cars at the same events every time, you have to increase your pit sizes and everything else. So that’s kind of when we got called out on going to Mexico and he’s like, well, I like racing in Mexico. And so that’s when we worked the deal. You go to Mexico and we’ll go here and you know, we’ll fund both things and we will come down there and help you out.