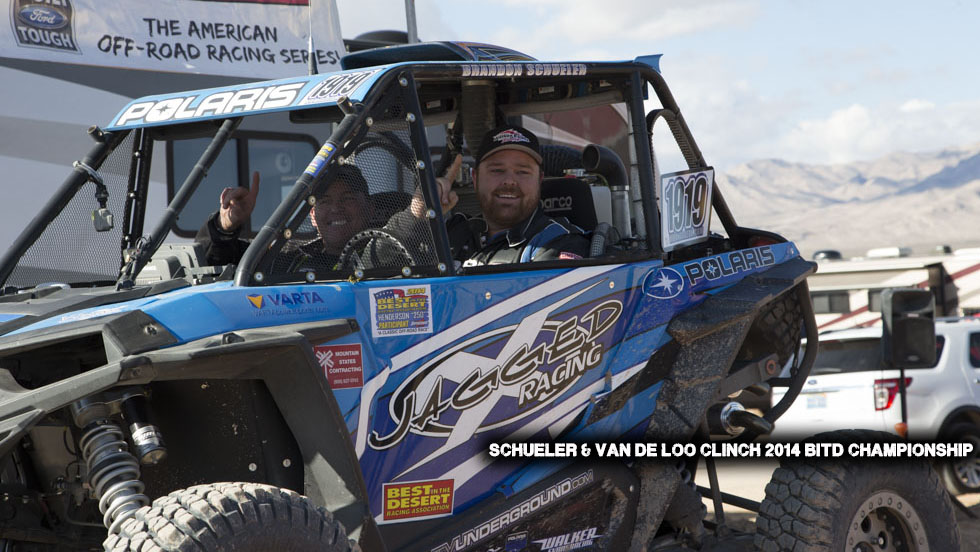 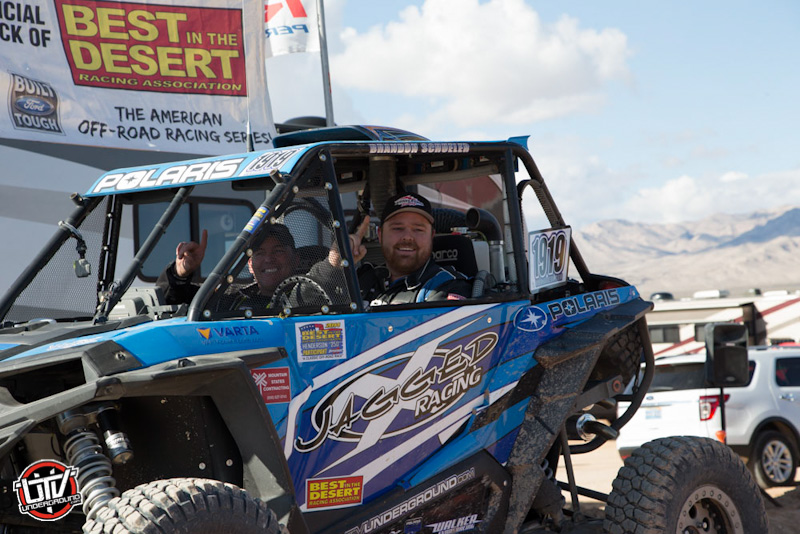 No other current UTV racer that I can think of has won 6 championships racing at a professional level and against such a high level of competitors. The only other UTV driver I can think of that has done anything close was Chad George who won a total of 7 championships racing Yamaha Rhino’s and Kawasaki Teryx’s at the Championship Off-Road Racing (CORR), M4SX, Lake Elsinore MX and Lucas Oil Off Road Racing Series’. Chad George and his Funco team were the kings of their time and helped pioneer the short course off-road racing scene much like Schueler and Jagged X has done at BITD for the UTV desert racing scene. Nevertheless what Schueler and the Jagged X / Polaris Racing Team has accomplished in this new era of UTV racing is nothing short of amazing.

Brandon came into the 2014 season riding a 2 race win streak and was still flying high after pulling off the 2013 Championship in the final race last year, the 2013 Henderson 250. He came into 2014 still racing his 2013 Polaris RZR XP900 despite the big guys already building and switching to their new 1000’s.  Heck, he had to finish building his teammate, Craig Scanlon’s, XP1000 and get that done before even starting on his own new RZR. Not that he wanted too build another RZR of course, but he knew he was going to need the extra power as the season went on and the UTVs got faster.

Brandon kicked off 2014 by winning both the Parker 250 and the coveted Mint 400. He rode his 4 race win streak into the Silver State 300. At Silver State Brandon would race the same hot RZR XP900 that had him on that win streak and delivered that 2013 Championship. Instead, he would race in a brand new helmet. Why does that matter you may ask? Well, the helmet’s paint fumes would eventually make Schueler sick forcing him to pull off course and let co-driver Blake Van De Loo take over. Blake wouldn’t miss a beat, Blake is a wheel man himself, but unfortunately for them they would finish 4th place just missing 3rd place.

The 1919 would show up to Vegas To Reno with an entirely new look. Between Silver State and V2R, Schueler and his Jagged X Polaris teammates were able to get the new XP1000 finished and ready for battle. The new 1919 came off the line and never once looked back. They would battle with Kiger & Holz in the 1934 Coastal RZR all day long and would finish just ahead of them physically but would lose by less than a minute on corrected time to the 1934. It was a heart breaking loss but was a sign of the times. UTVs were getting faster and the competition was getting tighter. The race however was a testament to Brandon and Jagged X as race RZR builders. They brought that brand new machine to the longest race of the season and damn near won the race! 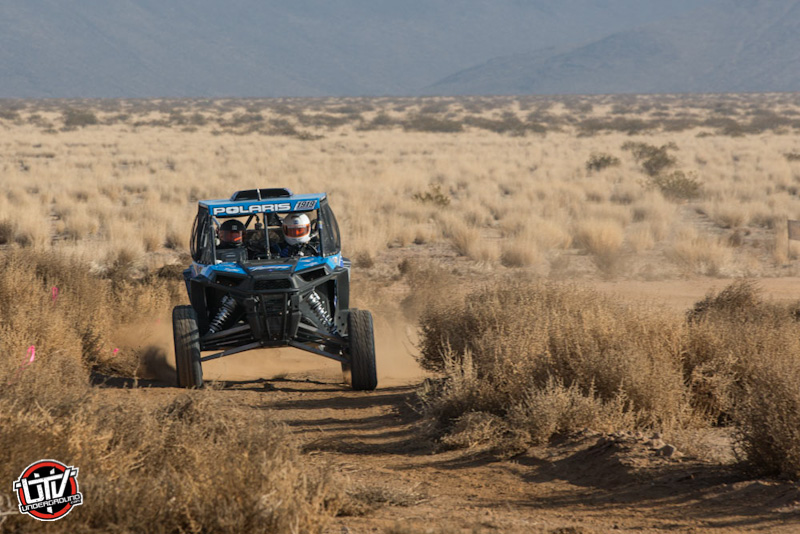 After a short break, the team would head to Parker for the Bluewater Desert Challenge. The 2 day format is fun and fast. You have to let it all hang out for 2 days strait and your junk has to hold up to have a chance to win. Schueler ran a perfect race. His equipment held up and he and co-driver Blake Van De Loo closed the race out with a 1st place overall finish. The win would put them 10 points ahead in the points race as they headed to Henderson. At Henderson they laid it down and did exactly what they needed to do to win the season championship. They knew that they had to either beat Coastal or finish within one position. Of course they wanted a win but finishing second behind Coastal for the first time didn’t hurt so bad. It would be just enough to clinch the season championship and give them the points they needed to hoist their 6th Pro UTV Championship Trophy.

Its easy to dismiss Brandon, Blake and Jagged X as a team that has big money and factory sponsored support and thats why they win. But you can give those same things to others and its not a guarantee they are going to win a championship, let alone 2 in a row, let alone 6 in as many years. Some things you just can’t buy, like talent, like dedication, like drive! Jagged X Racing is not just a team that gets support and buys their way onto a podium. They put in the work required to run a winning program and thats why they get the results. I say this because no one in this sport should look at Jagged X and try to find a way to discredit what they have just accomplished. Instead, teams, individuals and others should look to Jagged X as the blueprint for how you obtain and keep sponsors and better yet, how you win racing a UTV! Those looking to run a program should look to Jagged X and take notice. And best yet, you can learn how you to have fun while doing it. I don’t think anyone who races against Jagged X could say anything really bad about these guys, I know I can’t. Then again, Brandon and Blake haven’t been whippin’ my butt the past couple of years.. jajajajaja

With all this said I want to finish by congratulating not just Brandon & Blake, but the ENTIRE Jagged X  Polaris Racing Team for their Championship. We are honored to call you all friends and we appreciate the level you have helped push this sport too.

Congrats from all of us at UTVUnderground.com,