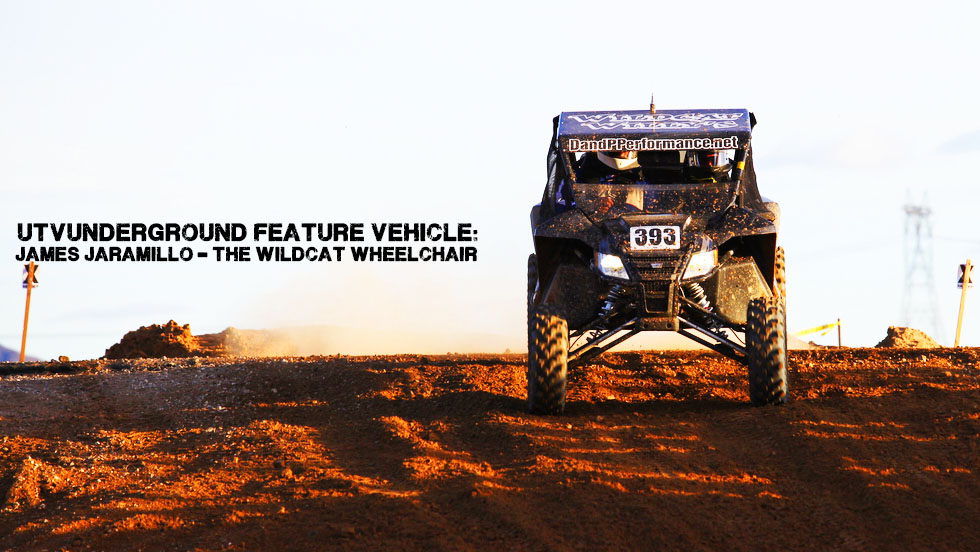 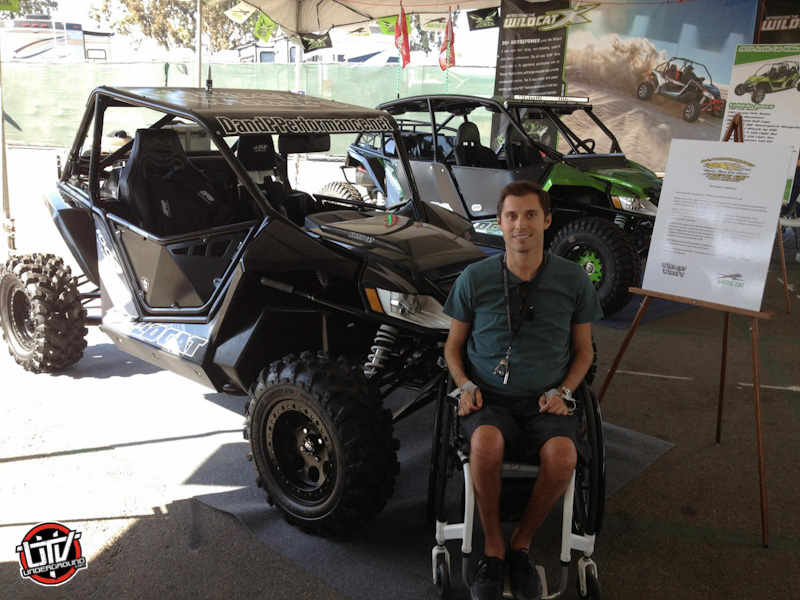 We first met James Jaramillo on our forum back in 2009. James at the time was building his first Polaris RZR to help him get back on the track after a 2004 MX accident that shattered his C5 Vertebrae. James was only 17 when the accident happened. The crash left him paralyzed from the chest down and robbed him of the use of his legs and diminished the strength in his arms. The accident was life altering to say the least. A wheel chair would become part of the rest of his life, but James wasn’t ready to give up his love of speed and off-road. That’s where UTVs came into play. Quickly James with help from friends and family, began developing steering and hand controls that would allow him to get his fix. Fast forward to 2014 and James is now on his 3rd UTV and is planning to compete in a full season at WORCS.

I was able to catch up with James at round 2 in Primm. James showed us his new machine which he plans to keep modifying to dial in. We thought it would be not only inspirational but cool to show all that he and his team have done to get James back on the track and competing in the off-road scene. James broke down his build for us and now we want to share it with all of you!

James isn’t the only one in his condition competing in and enjoying UTVs. There are many like him, and I encourage all of you who have suffered spinal cord injuries to look at what James and guys like him have done to overcome and get out and participate in this sport. We had a member group at one time on our forum and the name stuck with me, it was called “UTVs Make a Great Wheelchair”. I think James would agree with that! 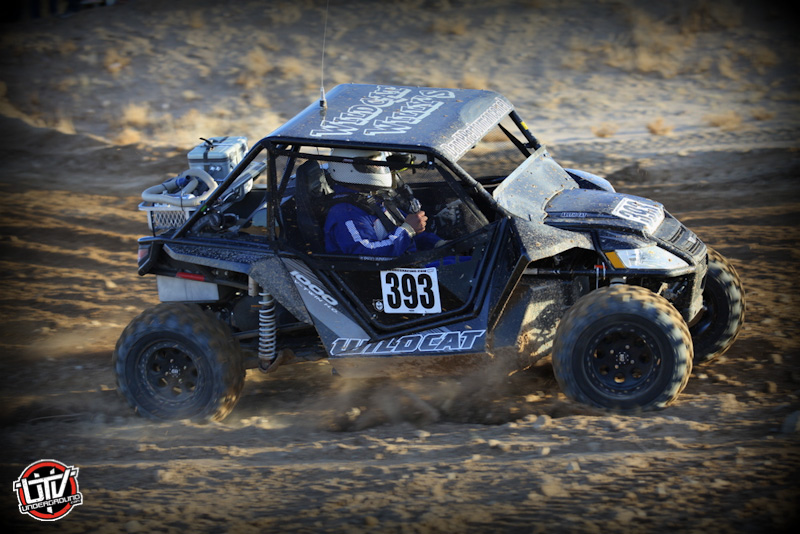 The Wildcat Build by James Jaramillo

Steering
Due to my limited arm strength, the top priority with this car was to have the lightest steering possible.  We accomplished this by finding the steering wheel position where I could get the most strength to the wheel. In addition I had to purchase the strongest, most efficient power steering system we could find.

My spinal cord injury is at the c5 level, this means I am paralyzed from my mid chest down, have limited motion in my arms, and loss of function in my hands and fingers. When I built my original RZR, my friend noticed that I had much more arm strength closer to my lap, versus out in front of my body.  For my new Wildcat he came up with the idea of having the steering wheel in my lap (like a bus) versus in the traditional position.  My arm looses most of its strength between 10 o’clock and 2 o’clock on the steering wheel. By having the steering wheel low and flat it helps lessen this effect.  This positioning worked great for me in the RZR, and we decided to keep this same idea in the Wildcat. 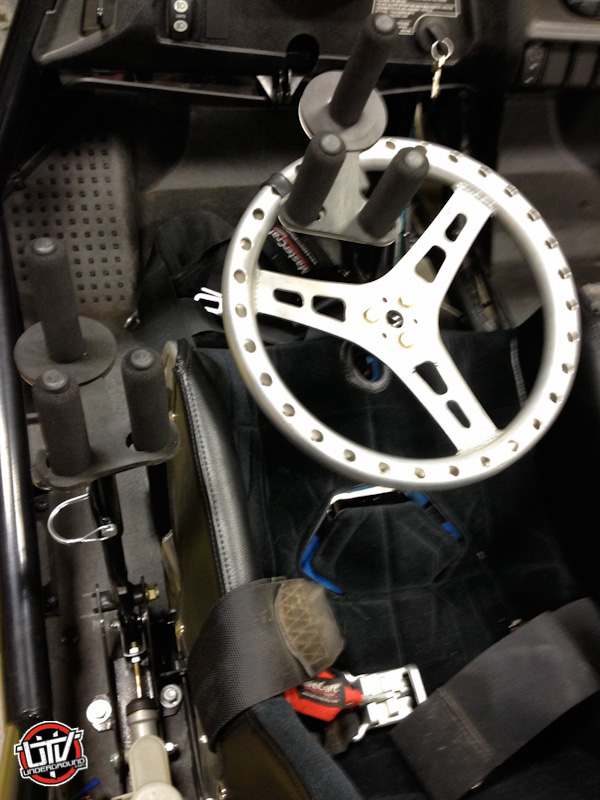 My old car had a hydraulic ram-assist system.  This worked fine to drive casually, but I’d needed something lighter to be able to throw the car around like I’d want to.  The steering is a full hydraulic system from PSC Steering.  Dean Bulloch had told me that this was the direction we had to go to get the power that I wanted.  Dean used a pulley from a supercharger to drive the power steering pump.  Luckily the Wildcat turns out has a spot to attach this system! 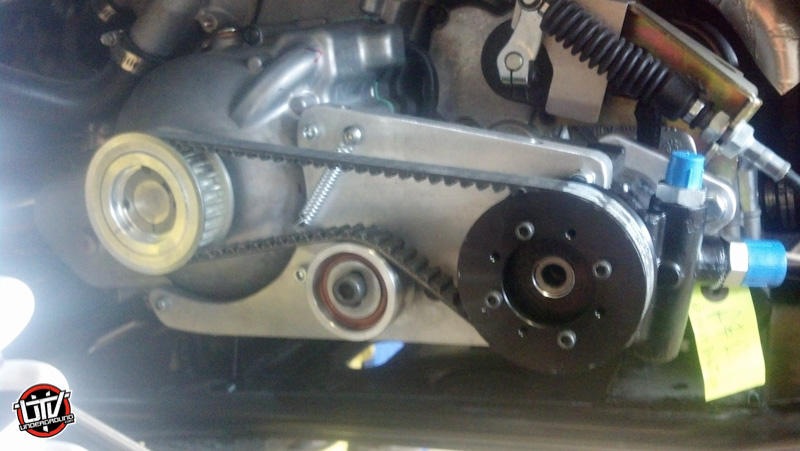 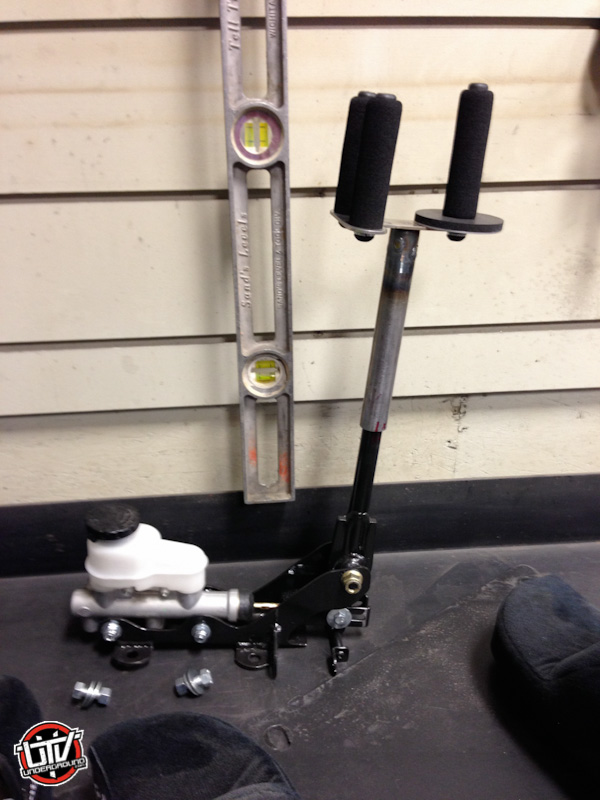 Gas/Brake
After trying numerous off-the-shelf daily driver hand control setups, I found it was best to custom fabricate a throttle/brake system that would tie directly into the brake master cylinder and throttle cable.  I used this on my RZR and wanted to copy the same idea to my Wildcat.  The idea is very simple, I pull back for gas and push forward for the brake.  However, it is very difficult to set up correctly.  Between getting the full throw out of the throttle cable, getting 100% power from the brakes, and finding the correct height and reach for my arm, we have many, many hours into dialing in this system. Now that we have it dialed, I wouldn’t want a set up any different. Its very similar to the way that Evan Evans has his Pro short course truck set up for him. Its efficient and now that I am familiar, I am able to use it almost to its full capability. With time, it will allow me to get the most out of the acceleration and braking of the Wildcat. 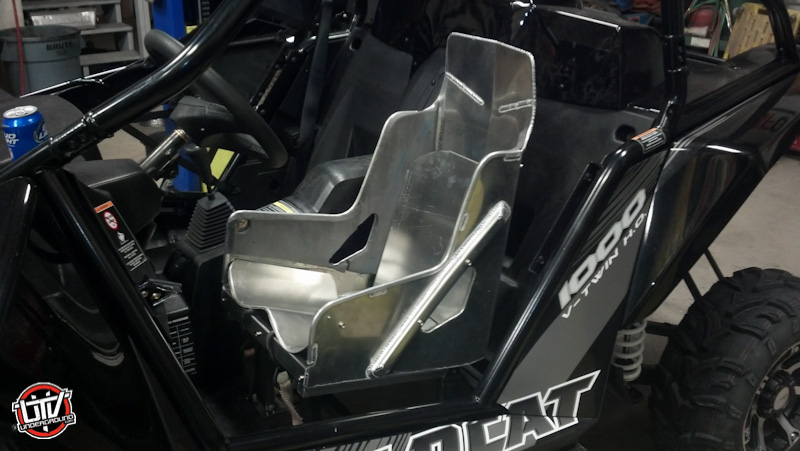 Seat
Being that I cannot use my legs and core strength to stabilize my body, seating fit and position is extremely important.  On my RZR I originally had a suspension seat, this was an improvement over stock, but allowed for way too much movement.  I learned keeping my ribs and shoulders held in place was going to be very important.  Also, once my steering wheel was moved from the traditional position, my elbow would hit the wings of the seat, not giving me enough motion to drive the car.  This was also true with my throttle/brake.  I installed a generic Kirkey aluminum seat in my RZR, this helped a lot but I knew I needed something custom fitted.  It only took me rolling my RZR one time to learn how much your body can stretch from the seat. 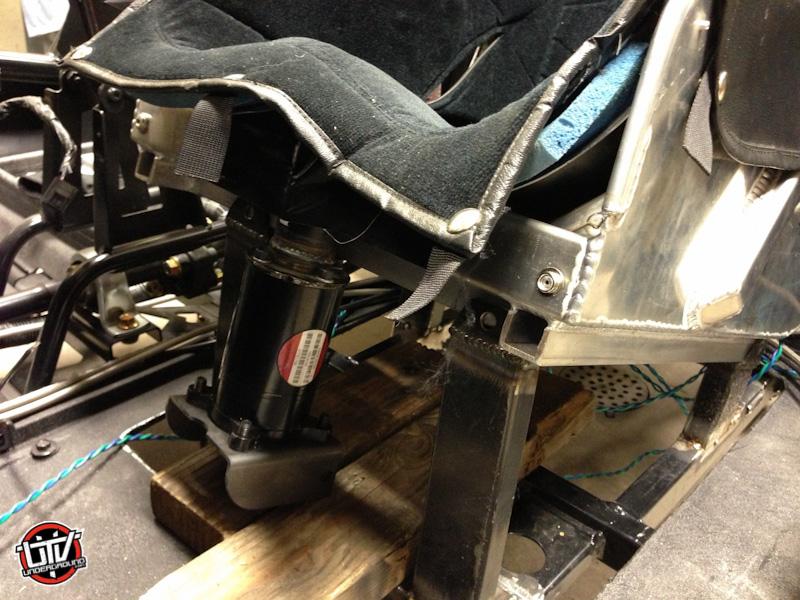 For the Wildcat I worked with ISP Seats and was fitted for a custom aluminum seat.  This is basically the same type of seat used in monster trucks, NASCAR, and open wheel racing.  It holds me in extremely tight and is very safe.  They pay special attention to cushions, hip placement, and weight displacement.  This is extremely important, because I cannot feel if I have an injury in my lower body. So far the seat works great! I could see it being a valid option not just for guys like me, but for anyone racing in a UTV! 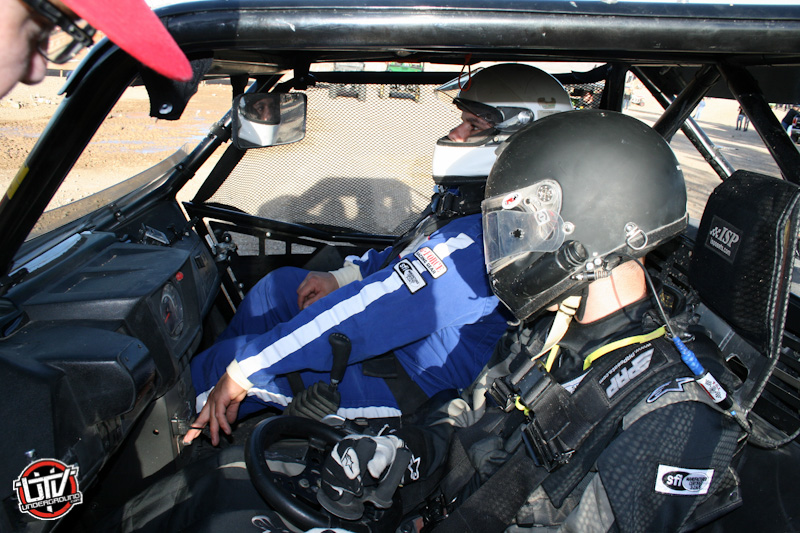 Safety
Safety was obviously a top priority when building this car.  If I have any type of small injury, it can put a major inconvenience in my life for the next few months.  Seating was obviously at the top of my list.  Installing a fuel cell and fire suppression system were two things that went in the car before I’d even drive it.  We installed a 10lb extinguisher bottle and 4 nozzles, one to the driver, another to the passenger, one to the engine, and another to the fuel cell.  The system is always armed with a toggle switch, and is activated by a light touch of a big red button.  Some guy hit it at the Sand Sports Super Show, so we know it works extremely well. 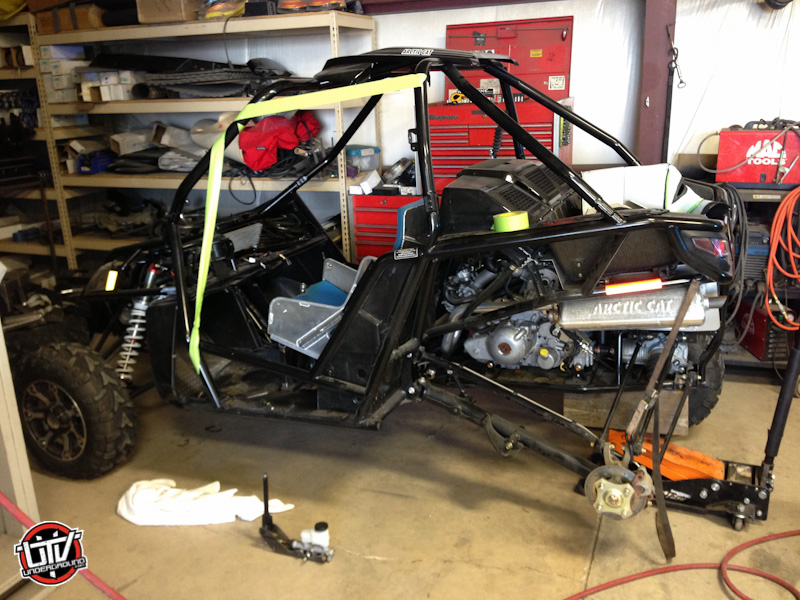 A cage and doors were also a must do.  I wanted to put a race cage on (Dean and Todd at Wildcat Willy’s / D&P Performance build the sweetest looking Wildcat race cages), but we decided the race cage would make it too difficult for me to get in and out.  Ease of use was also a top priority in this build.  I went with their Wildcat Willy’s sport cage and PRP doors.  They are very easy to use, and I do not feel the least bit exposed.

You can see that we moved the key and all other controls to a position where I can reach them while harnessed in. 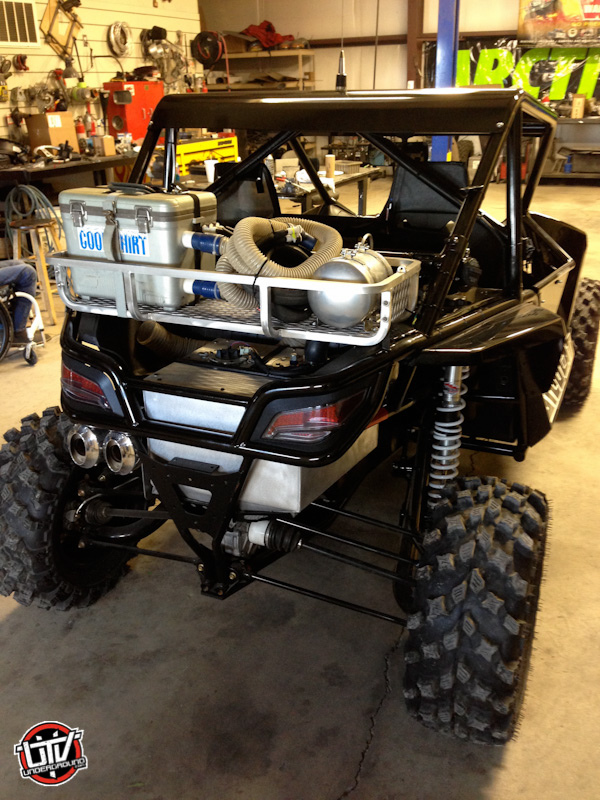 The ice chest in the back is a Cool-Shirt.  Due to the nature of my injury, I cannot regulate my body temperature. This means I cannot sweat in the summer to help cool my body off.  The cool shirt pumps ice water through a t shirt that had lines running through it and pumps the cool air to my helmet.  Living in Las Vegas, this extends my riding season a few extra months. 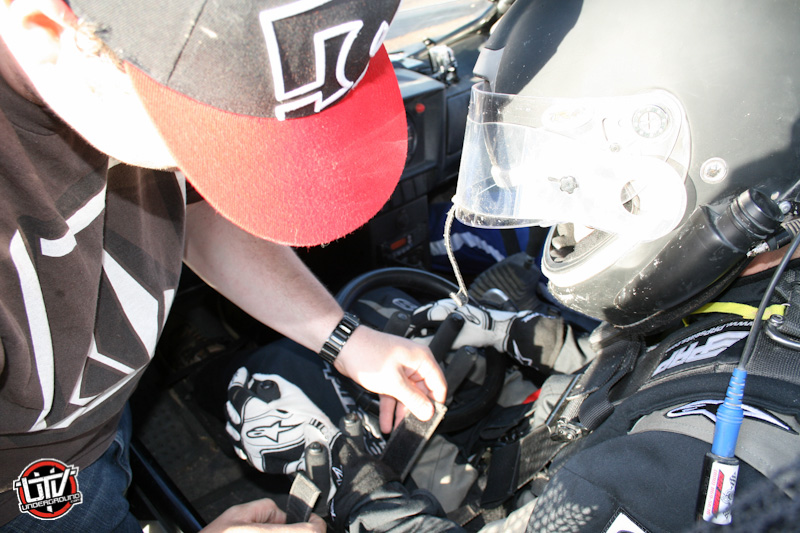 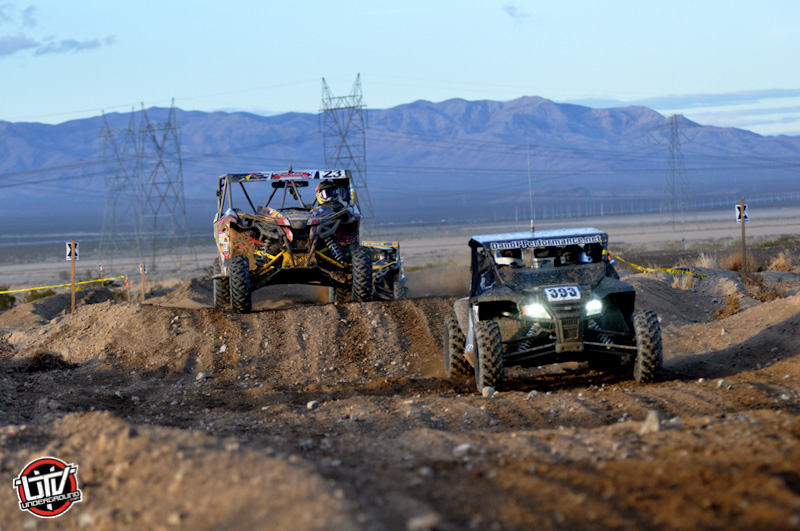 Driving the Wildcat
As we were planning to build this car, Dean Bulloch told me he had one goal.  This was for me to be able to drive the car to its full potential.  That is why we spent so much time on perfecting my controls and body positioning.  He warned me that the hydraulic steering will be different to drive than the standard steering.  It definitely is.  Being that it is so powerful, you loose almost all road feel.  This works great for me because I can drive the car the same in the sand, hard pack, and rocks.  Since the steering is controlled by fluid only, that also makes things interesting.  The steering wheel does not have a center, so every few seconds my hand position and steering wheel will change.  It is much like operating heavy equipment.  Dean has spent years of rock racing with this type of steering.  He told me that you only “need to give a little to get a lot” and to “be careful, otherwise you’ll find yourself on your lid real quick”.  He did say that learning how to drive with hydraulic steering will make you a better driver, because it makes you drive by the feel of the car, not necessarily the position of the steering wheel.

There has definitely been a learning curve, but every time I drive the car I feel more comfortable.  I am absolutely blown away by the handling, power, and suspension of these new cars.  I know that we will get to Deans’ goal of driving the car to it’s full potential, and my personal goal of being able to be competitive when I race the growing UTV classes.

Check out James’ RZR build here, its worth the read!  https://www.utvunderground.com/forum/showthread.php?t=2664 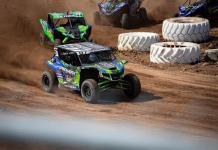