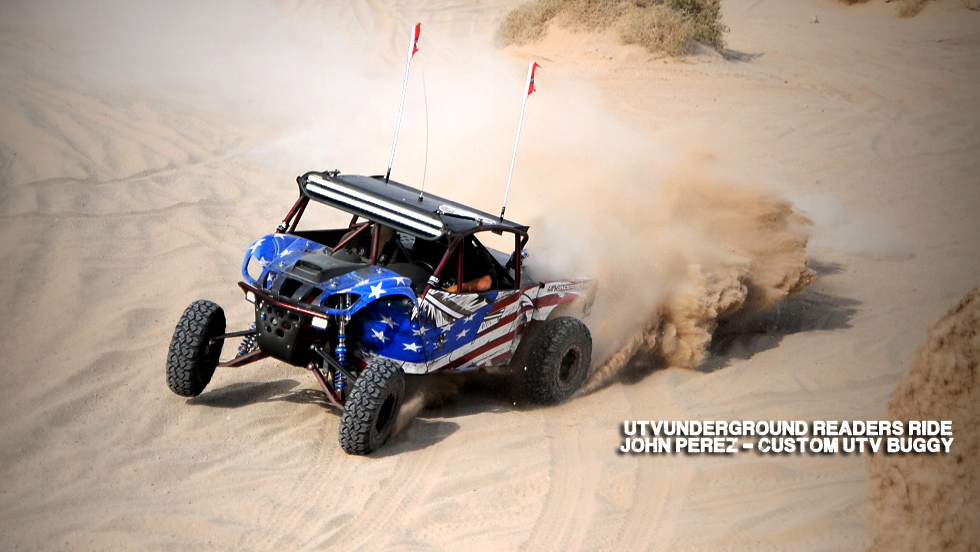 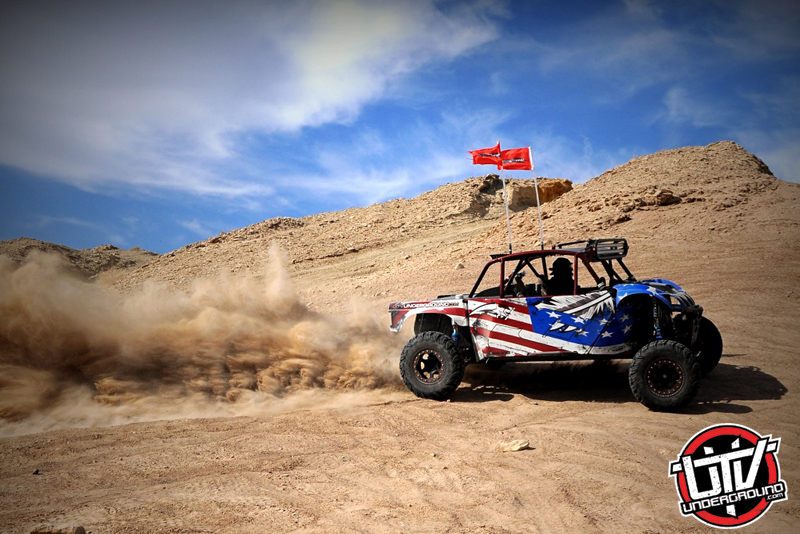 What can we say? John Perez for the past 3 years has hosted one of, if not the most in depth build threads ever on UTVUnderground.com’s forum (read thread here for insane build progress photos). John, his friends, and family started with the goal of building the ultimate UTV in their garage and what came out is simply beyond what a UTV is, and we say that in a good way. This is the end result of 3 years of hard work and dedication, proving that John as a family man and a buisness is man is also a true off-roader in every sense of the word. “Built Not Bought”, a phrase Jesse James has made known is what comes to mind when seeing JP’s amazing machine.

So on this Veterans Day, we felt it was only right to showcase this READERS RIDE! Not only does it have a patriotic theme, it also stands for everythign this great country is all about. Freedom to think creatively, freedom to persu your visions and dreams, and freedom to enjoy this great land in a responsible yet over the top way! So here’s to you John Perez, all of you veterans who make these dreams possible and of course to the members of UTVUnderground.com who have followed along on this amazing journey via the forum build thread. 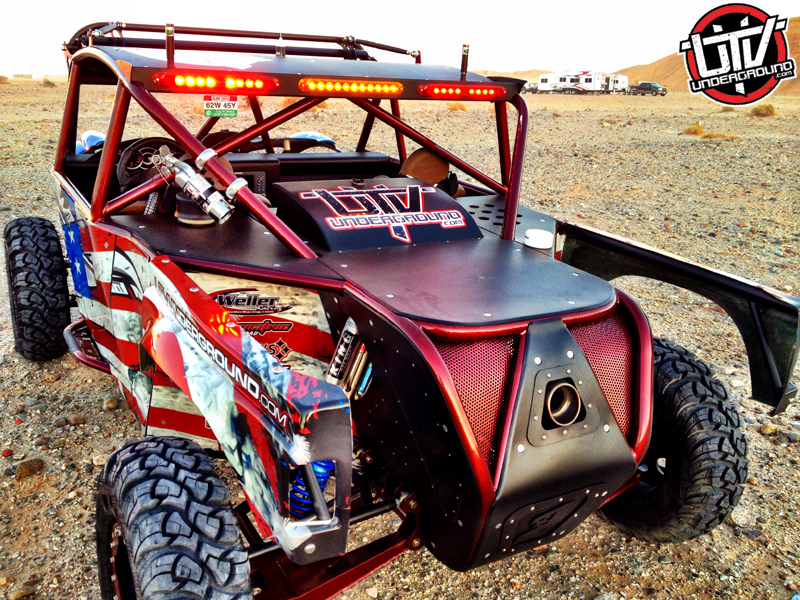 Back in 2005 when I bought my first Yamaha Rhino I was hooked! The Rhino brought a huge amount of versatility and allowed me do do things and go places while packing large amount of gear for over nighters and all day rides. Like most, I instantly started customizing my new toy, being a hobby fabricator who also has owned and modified several offroad cars, bikes and quads I was really excited about where this thing could go. Although I had the ability to save cash by doing most all fab myself, I learned real quick that investing 30k in one of these machines wasnt going to be hard. The white feather (my first Rhino build) was created and although it won several best of show awards and served its purpose as a fun family UTV, it was still lacking in the HP category. Don’t get me wrong, I enjoyed driving my Rhino for what it was, but after getting smoked by a stock RZR 800, and still watching manufacturers building vehicles that were still lacking in durability, suspension and HP I knew what I had to do to get my fix as a UTV owner.

In 2009 my son Jared Perez (9yrs old at the time) and I started preparing for this project in our garage. It had to be a home build because there was no way I could get away with being at the shop day and night and keep a family life. Although we had plenty of fab tools, we were missing one that would make the build I had in my head a possibility. So I bought a torchmate cnc cutting system; this would allow me to draw and cut parts when I needed them, creating a one off desert eater. Part 2 was to gather all the parts for the build, there’s nothing like starting a build and not having all the parts you need to put it together. So I bought the Engine (A 2008 Hayabusa 1300cc), gearbox, Hubs, shocks, steering rack, etc… Then I moved on to design. I had limited experience with cad design, so I called up a good friend for some help with the suspension designs. Once the design was complete I proceeded to draw my bulkheads, towers, steering mounts, etc. We had a very simple criteria for this build; wheelbase, suspension travel and horsepower. Most important to me was to keep true to SXS’s which is why I stayed with A-rms in the rear. 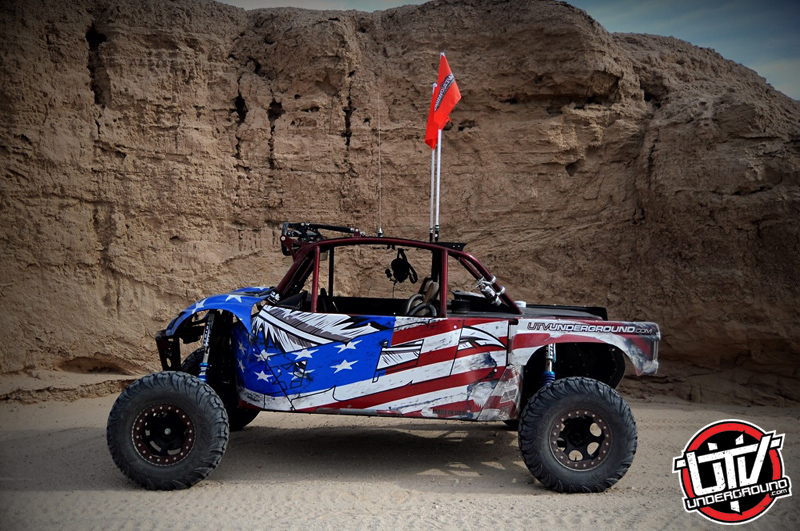 Let the build begin! in 2010, we began by laying out the seats, engine, gearbox and some a-arm templates. This is where we established our wheel base (103″) and position for all major components. Then it was on to hitting up the guys at Patton’s Steel for tubing and plate. We started the build with 2 main rails down the center and built from there. Because I am a desert guy the car had to be built stout, so sparing a few pounds and leave a potential weak point was never given a second thought. Durability was a must for this build as we didn’t want a car that would leave us stranded or become something we would be continuously making repairs on. Weight was always a consideration, but not to the point where safety or durability would be compromised and honestly at only 1650lbs im glad I stuck to that approach. Although, I had hundreds of hours drawing parts, having the ability to draw, cut and weld the parts on all in house made the majority of what I envisioned possible. This meant a lot of sleepless nights, a lot of pictures and an incredible amount of staring and thinking about how something should look or work.
Next, to accomplish the vision for this build it to be a super clean design. I didnt want radiators, oil coolers, fuel cells, exhaust, etc exposed; however it did need to all be functional. So a lot of thought went to where everything would be placed so it would all fall under the tins (aluminum paneling). This meant figuring out how to get air movement from the front of the car through the back to help with ambient cooling in the engine bay. We did this by creating a tunnel down the center of the car, so airflow would move from the front through the center console and out the perforated tinwork in the rear; the radiator is fed by a large scoop keeping the car at an always perfect operating temp. Another major player in trying to hide everything was weight distribution as trying to hide, radiator, oil cooler, parker pumper, fuel cell, engine, gearbox, batteries, etc also made for alot of moving around and shoe horning. But even with that, everything is still easily accessible by removing a few of almost 200 dzus fasteners on this car, even allowing the motor to be completely removed right out the top in less than a few hours. Next was styling; when we started this build my vision was a cross between a truck, UTV and a class 1, but after various failures in dealing with fiberglass vendors and months of indecisiveness I decided to go with the Rhino style hood and fenders. this would become 1 of a few minor Rhino parts that are on the car, it is not  Rhino never was never will be. 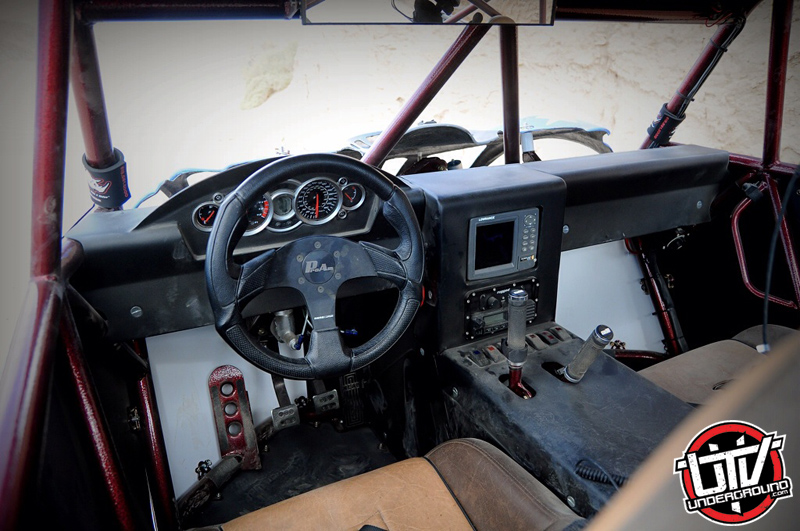 Styling is important, but performance is everything. The cars powerplant is a 2008 Suzuki Hayabusa 1300 boasting 200hp in its stock condition. Because I’m a desert guy, this car will never see a turbo in my possession as its nearly impossible keeping the wheel spin down in this beast. The 5:1 gear reduced RPM Box puts the power to the ground through Weller Racing midboard hubs launching dirt and rock bringing her to speeds upwards of 100mph. The car continues to produce wheelspin at 11,000rpms in the 90mph range while feeling completely stable and safe. Driving this car is amazing!! The suspension is made up of nickle plated custom King coil passes allowing the car to cycle cleanly through 19″ of travel. The boxed a-arms make anything that gets in the way child’s play. Steering is controlled by an HD Gear One steering box down to custom machined 7076 aircraft grade spindles making the front end steering components nearly indestructible. To see at night we ran 2-50″ Rigid Industries E-Series flood and spot bars with 2-4″ E-Series rows at the bumper making night, day!  These accommodations along with boxed lower arms, boxed bulk heads, and a rigid frame design make this the ultimate ground up sxs race/play toy.
In 2013 and after over 2000 man hours the car was ready for testing. Our testing results were beyond what we expected, where after only 150 miles of hard driving and literally trying to break the car we decided we would tear it down for powder coating. Now, being the owner of PowderCoat Industries this was the part I was really going to enjoy as this was where what I saw in my head 3 years prior be completed. So my son, now 13yrs old, tore the entire car down; this was one of the most organized tear downs we have ever done with my son bagging and labeling everything making the car go back together after powder flawless. After powder, it was time to put “me” into the car with the final touch being the wrap. Being a patriot, I knew I wanted a flag and of course a big white feather topped off with a “made in USA” design. So I sat with my boys at One Eleven Ink for some design work and the they nailed it! This was the icing on the cake and where I finally felt completion. It was a long road, a lot of sleepless nights, times of frustration but most importantly quality time with my son. 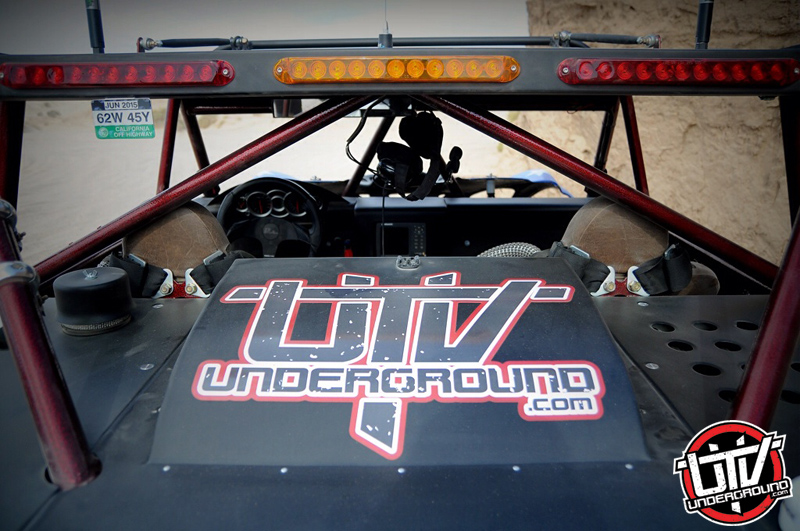 I would also like to give a special thank you to several friends, vendors and my wife for putting up with this for 3 years. Thanks Son for sticking with me through the entire build, you kept it going! Thank you to Joey D at UTVUnderground.com for hosting my thread and taking interest in my build. Thank you Rusty at UTVunderground.com for the amazing photos, that was fun! Thanks to Thad Mayhew at Fabwerx for your mentorship and the awesome dash, I couldn’t have built that dash without you. Thanks to James at Alternative Offroad for the lighting. Thanks to Paul at Streamline brakes for your support; your my boy! Thanks to Jason at Weller Racing for everything you did. Thank you Darrin at Prowlers Speed and Custom, Dan at RPM, Harold at Pattons Steel, Sidewinder Chains, my boy SteveA  for helping with the wiring, Josh Townhill, Josh Christianson, Chevy Sean and most importantly all the UTVUnderground.com forum members that help me keep this thing going with the kind words and comments. 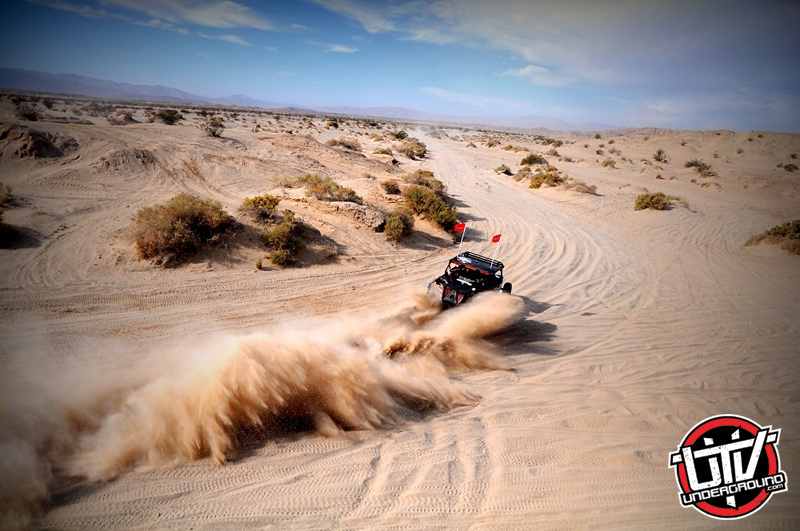