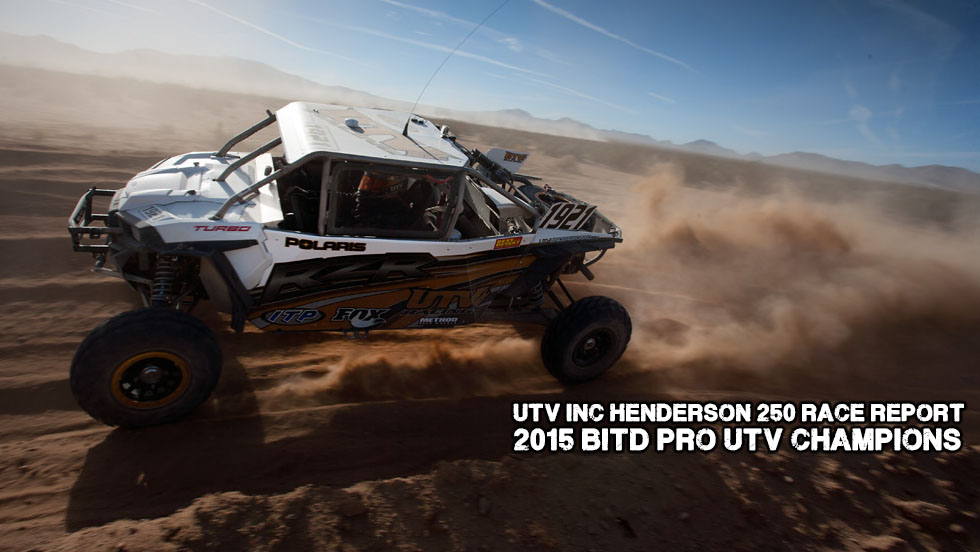 Well, who would have thought? Team UTV INC just pulled off another amazing feat. We led the Class 1900 UTV season points battle all year and just won the ‘2015 Class 1900 Championship’ in our Polaris RZR! 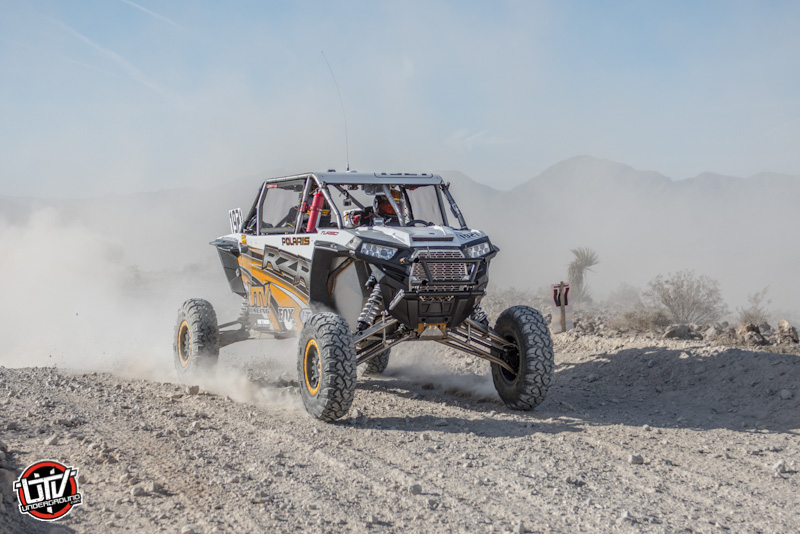 First off, I’d like to say thank you to all the bad ass guys racing against us, you rock! I’m not saying we are the best but I know how hard it is to even finish a race! When we first started racing a year and a half ago, we had no clue as to if we would ever win a race. We stacked our team with some of the best in the business. Companies like us that are always striving to be the best! Polaris Industries, jeez, what can I say about our RZR Team? They have supported me from the start! Building the best UTV’s in the business. I knew if I was going racing that I wanted to be racing a Polaris. Congratulations and thank you to everybody at Polaris Industries that has made Polaris the top company in the world for UTV’s and SXS’s. What has blossomed in to a American corporate power house, owning top brands such as RZR, Ranger, Victory Motorcycle, Indian Motorcycle, Slingshot and the list goes on and on. These guys are killing it, even producing vehicles for our United States Military. Thank you all so much!

Fox Racing Shox, Thank you! Lots of great shocks being manufactured out there but thank you for taking the time to develop and tune shocks. This makes your shocks not just great but the best shocks in the industry. Your team is the reason I chose Fox Racing Shox for all my race, play and prerunning!

LoneStar Racing, Thank you for putting up with all my bullshit and making us shine in the dusty desert. Because of you we have never not finished a race due to suspension failure!

Rigid Industries, Thank you for making sure the night is day so we can push the pace at all hours of the night!

Method Race Wheels, Thank you for supporting us and providing us with wheels that last during the test of time and the brutality of off road racing.

PCI Race Radios, Thank You for being part of our team and always going the extra mile so we can talk with our chase crews no matter where we are in the desert!

Pyrotech Fuel Cells, Thank you for keeping us safe and getting us that extra mile without fuel issues!

Wolf Designs – Jon and Amy, Thank you for making us look good even when we are doing bad! Thank you for going the extra mile and always getting us ready in time for the races.

Oh shit, how about that UTV INC crew? They built and supported 3, yes 3 … new Polaris machines in a 1 year period. I barely gave them enough time to figure out the ins and outs of 1 machine before asking them to build a new one! Props to the whole UTV INC crew.

Impact Racing, Thank you for the fire suits, helmets, Hans devices, gloves and especially for keeping us safe!

You see, I really had the smallest part in the racing program. They strapped my ass into the race car and told me to beat everybody else to the finish line while not destroying the car. You see this isn’t about me. It’s about the teams we have partnered with that got us a championship. I simply could not have done it without the support of everybody that helped me from day one. My friends, family, chase crews, Ford chase trucks, the media coverage and the haters that just pushed us to be better.

Kudos to the UTV Class. We had 30 entries in the Pro UTV Class and 22 finishers, me being the 22nd. LOL, yah, we had a major problem at this race. I’m telling you what, for a short race of 160 miles, this course has its fair share of huge rocks, cliffs, whoops and dangers. So I was really surprised at how many entries and finishers we had.

Boner and I jumped in our 2016 Polaris RZR XP 4 Turbo right around 8:30am in the morning. It was pretty freaking cold out, just under freezing. No real breeze in the air so we knew that starting in 24th position was just going to suck. We get out to where we are supposed to line up anyhow and we know we have one hell of a task ahead of us. 9-ish AM rolls around and the UTV’s ahead of us start leaving the starting line two at a time, side by side, every 30 seconds. The line moves pretty fast and before you know it we are off! We start next to the Polaris XP Turbo of Dan Fisher from Lonestar Racing and we smoke him into the desert. His car did look fast as we passed him in the chicane but I’m sure my car looked even faster to him as we flew by!

Out in the desert we are already engulfed in a dust cloud that is so bad at times we are going 10 mph and just trying to stay on the race course. We are praying that we don’t run into a large rock, off a cliff, or into the guys that had started in front of us. We slowly make up ground and pass a few people that had started in front of us but just as the dust gets a little better we clip a rock and at race mile 10ish we have our first flat tire. The rest of the field that started behind us start passing us as Boner is getting the tire changed. So now we are in last place, oh well, he gets that tire changed and we are back in the race. Passing the racers that just flew by us again and the car is running great! Then all of a sudden the car starts to die. As I look for a safe place to pull off the race course we have smoke start rolling into the cab. I tell Boner “JUMP OUT!” I think we are on fire, he gets out and sure enough we have a small fire that he quickly puts out. I notice for some reason the car has over heated and our temp gauge is reading 270 degrees. That’s not good! Boner looks around and he finds the engine coolant bypass line fitting has been pulled from the aluminum water pump housing. We have now lost all coolant. I tell him to fix it the best he can and fill the radiator up with water from our Camelbak’s. 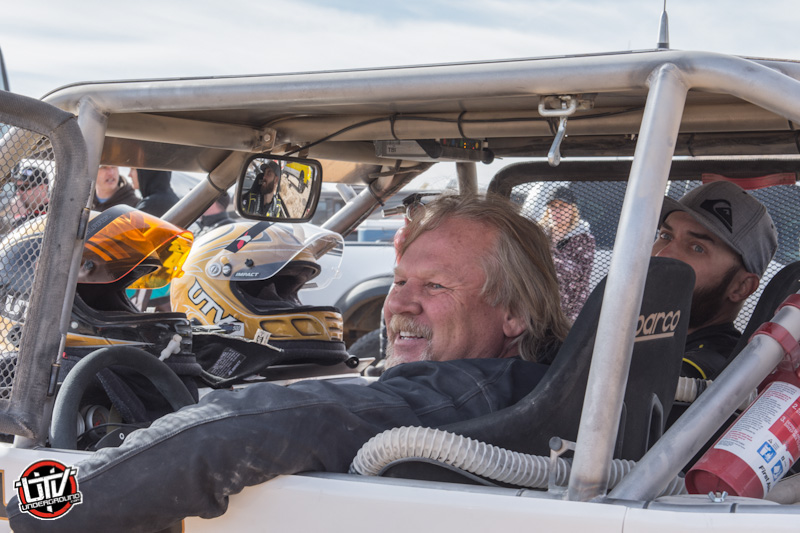 I start the car up and there is enough water in it now to cool the engine. I am sure we have an air pocket in the engine that is not going to allow us to go far. We pull back onto the race course and within a ½ mile it over heats. Damn! We have 5 miles to go ‘til our pit where we might be able to fix it but this goes on a few times and I pull over next to one of the race course workers. I ask Boner to jump out and see if he has any water so we can fill it up and bleed the engine of its air pockets. In what seemed as eternity he gets it done and gets back in the race car. We are off and racing again! At this point we know we can’t win the race but I tell him let’s get to the pits to see if we can rig something up so we can at least finish the race for shits and giggles. They get it rigged up and we have them toss 10 water bottles in the back of the car just in case. At this point we know we are not really in the race anymore but figure we came this far lets go have some fun! We did get a text massage on my phone while we were RACING telling me that I inherited 3 million dollars. Boner says that it was meant for the both of us to split since were racing together. I call bullshit on that one, LOL… anyway we make it to the finish line. When we arrive we’re told that we have lost the championship. They are telling us we got second place in the overall championship. Oh well, not bad for our first run at it! We watch, a little surprised, as Cognito Motorsports pops the Champaign bottles and celebrates the championship we thought we had won. We were under the impression that they had to come in 1st place to beat us and we knew we didn’t even have to finish. But, Okay, they fought hard and they won, congratulations. A couple of hours later I get a text message from Bill (Jagged X) saying ‘so how do you think it played out?’ I say ‘No clue’ and he proceeds to confirm that he believes we just won our first overall Championship.