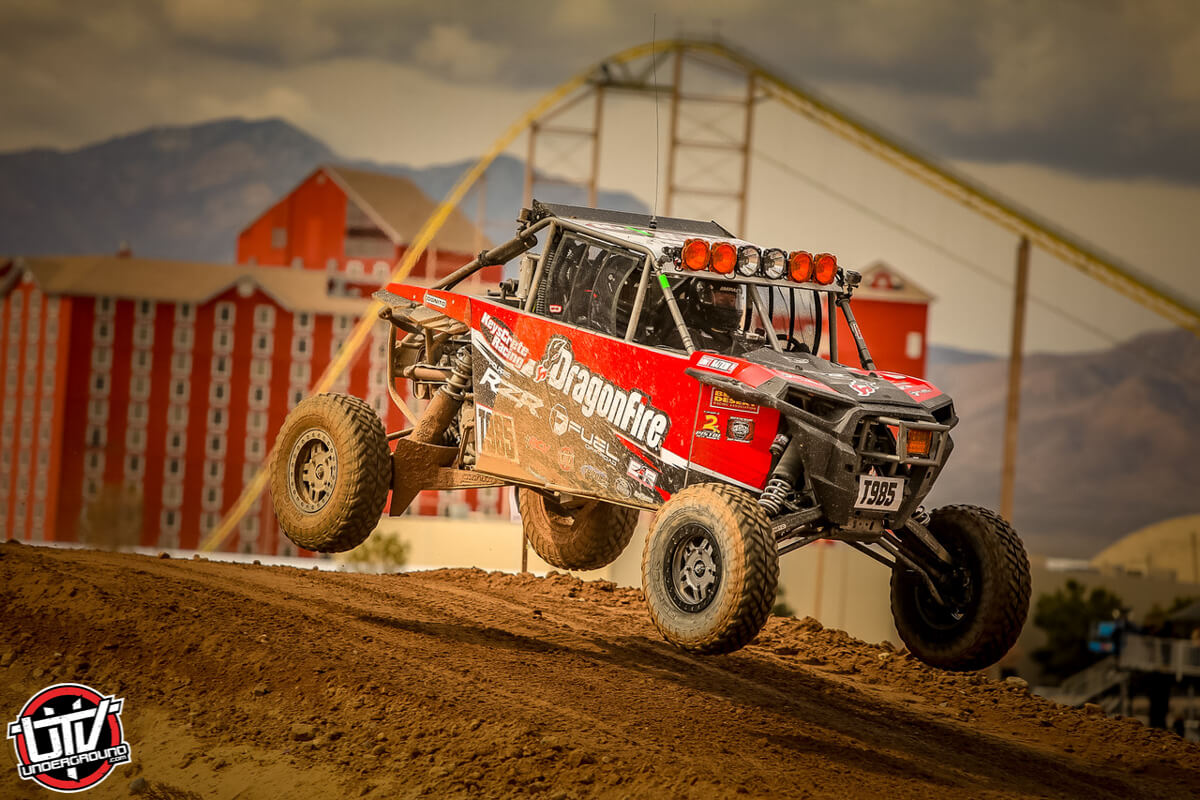 The Mint 400 is the biggest race of the season! The premier off-road event in the United States kicked off in style with Wednesday’s parade down the Las Vegas Strip. The Off-Road Festival took over Fremont Street Thursday and Friday with numbers up across the board for vendors, racers, and fans alike. The much anticipated return of motorcycles brought many new teams to the mix, and an increase in media attention. 541 racers entered the event this year and promoters estimated 25,000 spectators for downtown festivities alone.

Wednesday—Arrival
Traveling from Florida, Mississippi, and Arizona, the KeysCrete Team arrived with a pristine wrap and new paint job on the #T985 car-—pulling into Las Vegas just past noon. The iconic Golden Nugget Hotel and Casino served as the team’s base for the week, so we settled in there and went about the business of situating the race car in its proper lot. We spent the rest of the evening meeting up with friends and making preparations for Sunday’s UTV Turbo class. 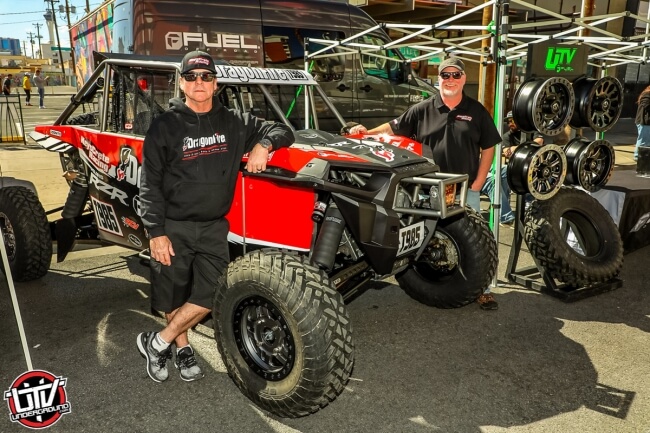 Thursday—Tech and Contingency
The Off-Road Festival took over Freemont Street. The crew headed out early, to showcase the car into FUEL’s vendor booth, right in the heart of the activity. It was a brilliant day— we estimated a 30% increase over last year’s event. There were hundreds of displays from the world’s best off-road companies, lots of racers going through tech and contingency [including the much anticipated return of motorcyclists] and a heavy crowd clambering to mingle with the word’s top off-road influencers and icons. There was a lot happening— and it was a powerful testimony to the healthy state of the off-road industry. By 4:00 we were pushing the T985 through the crowd, on our way to tech and contingency. It took us 2 hours to weave our way through the throngs of people. Tech and contingency went perfectly, and we were able to register early that night, wrapping things up by 8:00. We returned the car to the trailer and headed back to the nugget for good old Vegas fun.

Friday— Drivers Meeting
Started out early, unloading the car and heading back to the Fuel booth to put the car on display for the remainder of the Off-Road Festival. It was typical Mint 400 day, lots of horsepower, good friends, great food—and a great time to catch up with our sponsors and have some fun with our fellow competitors. Overall the UTV crowd is growing with a lot of new products and modifications being offered. The dirt bike crowd is a group we are well acquainted with, so it was good to see a lot of our buddies from that arena also.

The Drivers Meeting was held outside on Freemont Street at 6:30 pm- and it was absolutely packed—just a crush of people — it’s exciting to be a part of that!

Saturday— Pre Day
Lots to do on Saturday- so we were at it early. The crew met up for breakfast and headed into the desert to do a bit of testing, and make our final race prep. We spent a few hours airing up tires, charging batteries, installing power light bars, situating helmets with tear-offs and shields, etc. After all that, we washed the car down, and loaded her up in the race trailer. We spent a few hours watching races and meeting with sponsors in the afternoon- and made our way back to the Golden Nugget to discus race strategy and prepare for an early Sunday start.

Our plan heading into Sunday’s Mint 400 was to take it easy, and not risk damage to the car during this 400 mile run. We knew the course would be rough, so we voted to take a more moderate approach this time around.

Sunday— Race Day
We were up and at it by 1:30 AM. Everyone met in the lobby at 3 am and we made the long drive to Primm, Nevada for the start. After arriving in the pit area, we unloaded the car, and made our way to staging. Russell and his Navigator Jake Waddle lined up in 34th position on overcast and unusually cold morning. They left the line at 6:45 in low light. From the start, there was a lot of activity- and it was difficult to track Russell’s position in spite of the many tracking tools available. After completing the first 125 mile loop, Russell pulled into the central pit area to switch Navigator’s as Jake had taken ill. Louis Knerr jumped in, the crew fueled them up and the two rejoined the fray. Within 3 miles, the car had blown a belt. Russell and Louis quickly changed it out and jumped back into the race. 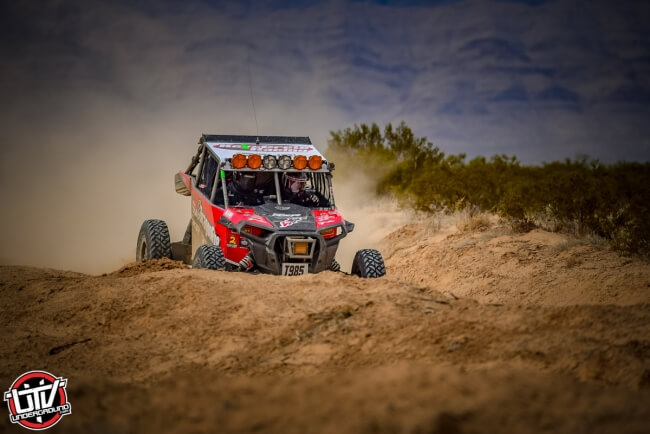 By the end of Lap 2, Russell had maneuvered to gain 19 positions —moving from 34th place into 15th place. He pulled into the central pit area to swap drivers and we realized the spare tire and the jack were gone off the back of the car. The strap that held it all together was broken, and there was no fixing that problem now. Jimmy Keys relieved Russell— taking over as driver for the remainder of the race.

As predicted, the course was incredibly rough.“I have never seen so many broken parts scatted through out a race course, it was amazing, there were fenders, hoods, a-arms. tires, carriers. It was incredible!”— Jimmy 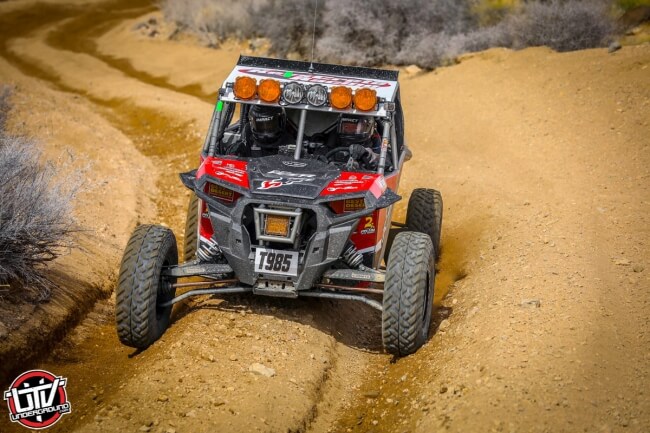 The duo ran the car at its upper limits until the last few miles of the race, when the car began sputtering— finishing 15th overall. The car was out of fuel, so we trailered her up quickly, and did a quick debriefing.

We want to thank each and every one of our sponsors for their expertise and their tireless support… click the links to find out more.

A special thanks to Harlen Foley for his keen eye and photographic skill!