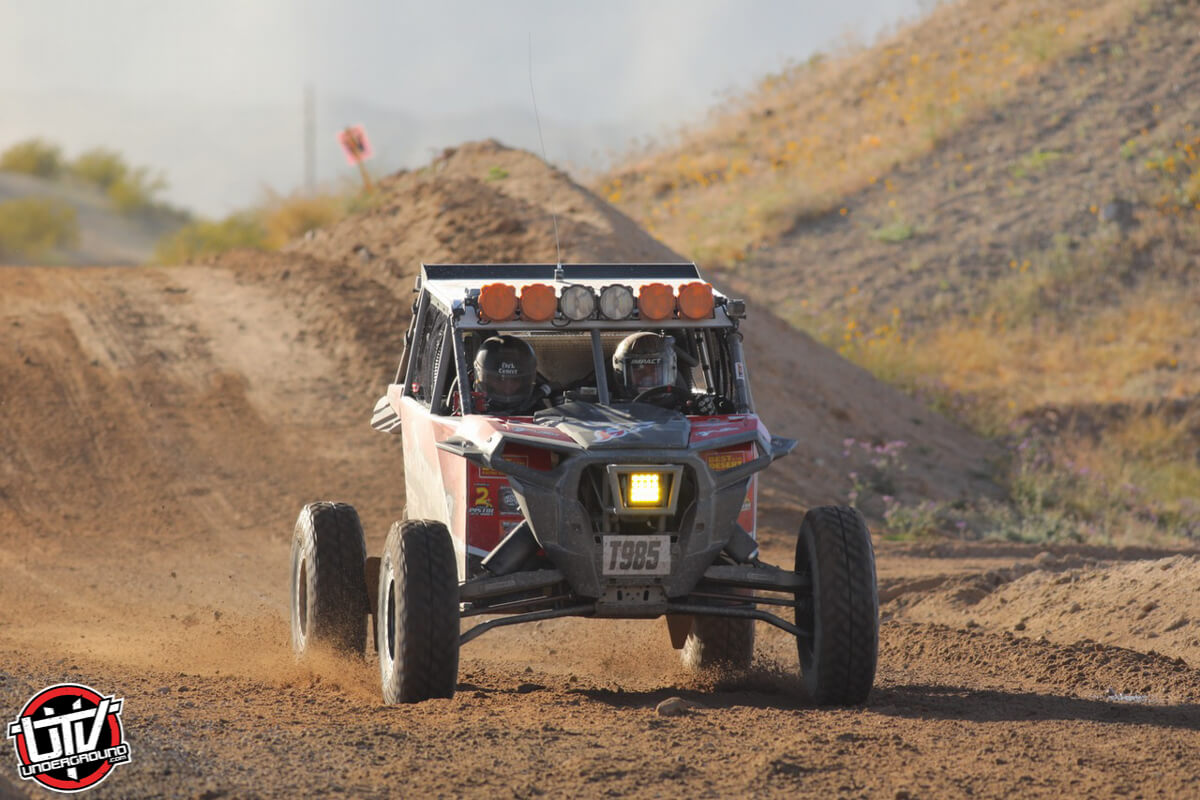 With a long journey from the East, the crew arrived late Thursday evening. We met up with the guys from Double E Racing over dinner at Don Laughlin’s Riverside Resort and Casino which was a beehive of activity and served as race headquarters for the weekend’s Polaris RZR UTV World Championship.

Friday started out with a crew breakfast and early registration. Shortly after we made our way to the contingency area to setup the car in the Double E Racing booth. Contingency was condensed to a single day event this year, compared with the previous year’s 2 day event, so there were was so much more going on. It was packed with crowds, vendors and teams— with over 400 registrants for this year’s race. Numbers were up significantly from last year, which was great to see and to be a part of.

The scene was electric. All of the top teams and industry leaders were here for the most publicized UTV race of the year. We milled around with the crowd taking in all there was to see and do, and chatted with sponsors, friends, and fellow competitors. In the afternoon we rolled the car through tech and contingency- and had a green light for the next day’s race. Festivities in the contingency area wound down after 5. We loaded the car into the trailer, and headed to the driver’s meeting to get all the pertinent information for Saturday’s big event. We wrapped up the evening out at the track and spent some time with the guys from Fuel; a great group who are always quick to share their knowledge- and a few laughs.

With everyone still on east coast time, the crew rose at dawn. Racing for Pro Turbo was scheduled for late afternoon so it was a pretty relaxed morning, and we all headed to the track around noon to catch a few laps from the early classes. We shifted into race prep early in the afternoon, giving the car a thorough review, topping off fuel, and setting up all the video, and navigation systems. 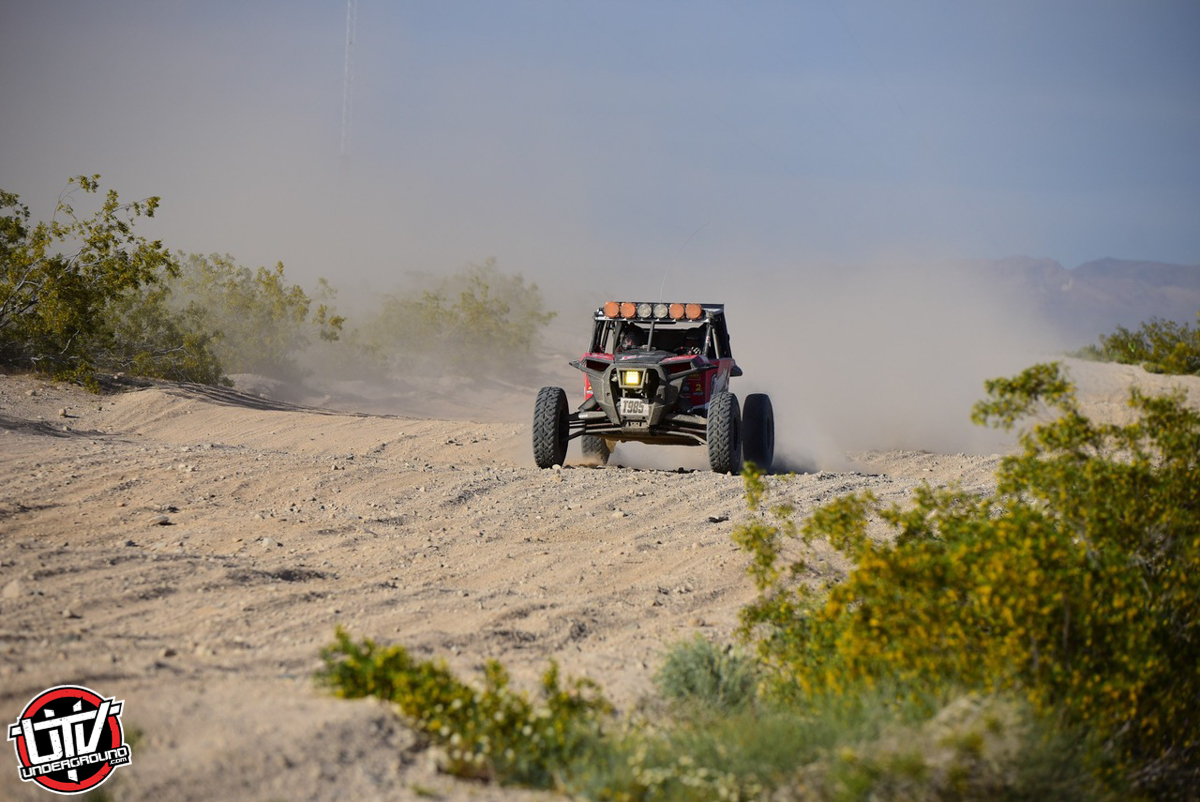 Staging for the UTV World Championship was about a mile from the Riverside Casino and Resort— and was laid out with the top 10 teams from the Mint 400 set to leave the line first. Two groups of 16 went out in following succession. KeysCrete (#T985) was positioned in the second group of 16— lined up 4th from the inside. Jimmy Keys was driver for this 170 mile race, with Jake Waddle navigating. We left the line at 4:30PM, running 6th by the 2nd corner staying with the front pack, and feeling really good. Pretty quickly in we noticed that the belt temperature was really high so we backed off to try to cool things down. Shortly after that we slammed into a monstrous wall of dust. With zero wind, that dust had been building all afternoon with every passing car; by the time we hit it there was absolutely no visibility, and to complicate the situation the navigation system went down as if on queue. We were driving totally blind. By lap 2, Jake had the navigation system back up and running and we were going strong. The desert section was extremely rough, yet the car glided over the jumps with ease— and in spite of the choking dust, we were running strong in the first 4 laps.

Then, three miles from the end of lap 4, we blew a belt. Jake replaced that quickly, and we headed back into the melee. As Jimmy made a move to pass another car, the belt was slipping badly. We pulled into the pit and discovered we had blown a turbo seal, which took us out of the race. Little disheartening but a testimony to the fact that the UTV World Championship is no “walk in the park.” 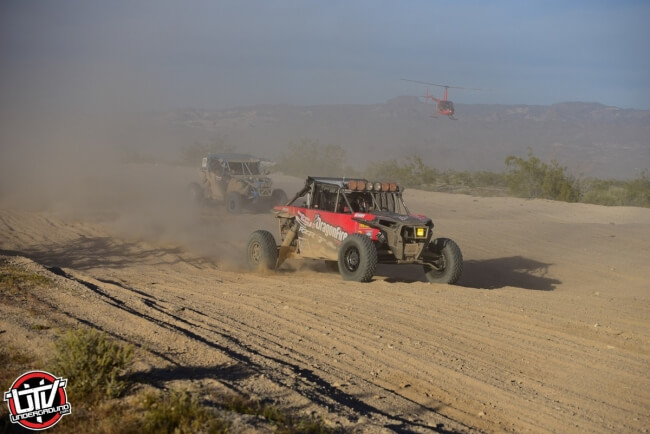 We took the opportunity to hang out with our mates on the Arizona based McVay team, whom we had pitted with. As the day drew to a close, we loaded up the #T985 for the long trip back to Mississippi, and everyone readied themselves for their return flights home. There is no rest for the weary as the Silver State 300 is just three weeks away.

We want to thank each and every one of our sponsors for their expertise and their tireless support… click the links to find out more.

A special thanks to Harlen Foley for his keen eye and photographic skill.