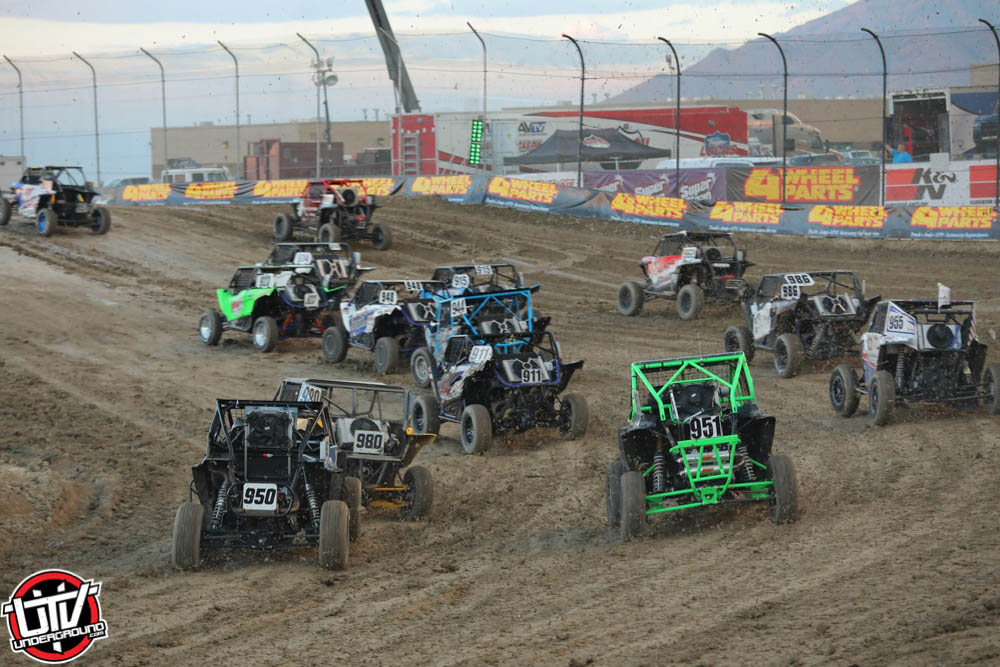 In Friday’s Production 1000 UTV race, Cheek started fifth in his Polaris RZR, but was quickly gaining ground. He took second on lap two and then took the lead from Brock Heger on lap five. 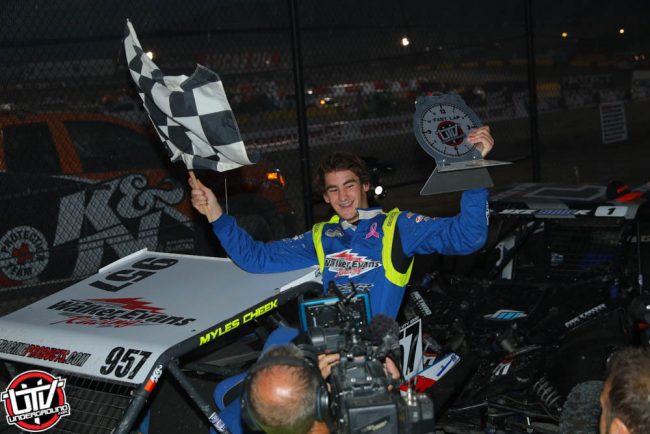 He then held off Heger until the race was called on time and scored his second victory of the season. Heger was second, ahead of Mickey Thomas, who started last mid-pack due to a transponder issue in qualifying. Nathan Barry and Jason Weller completed the top five. Heger, Thomas, Barry, and Weller were all driving Yamahas.

“We were just doing everything we could,” said Cheek. “Brock got a bit of a points gap on us at the last two races, so we bit down and we’re trying to get it done. We chased him down, got into a little battle with him, and then brought it home. Every time they threw that restart I just knew he was going to dive bomb me. Thankfully, we held on to it.” 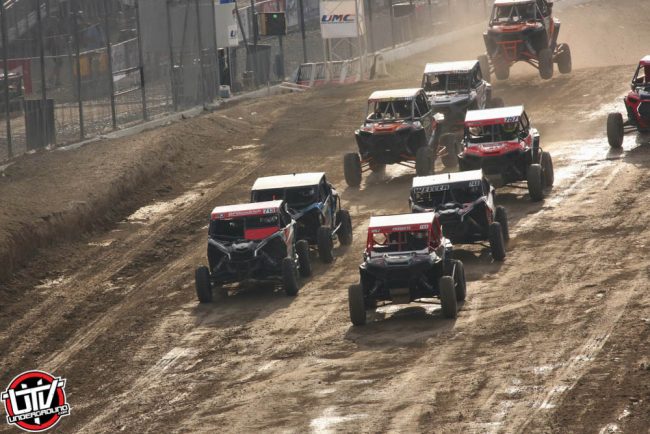 Heger was expecting slick conditions, but the track gripped up quickly. Early in the event, his car was on the bike quite a bit in the corners. The points leader is running for a championship and he elected to not get too aggressive during the waning laps and settled for his seventh consecutive podium.

“I thought it would be more of a slick track like it usually is, but it threw a curveball at us,” said Heger. “This is a good finish. We’re here for the championship, we’re keeping the podium streak alive, and that’s all that matters.” 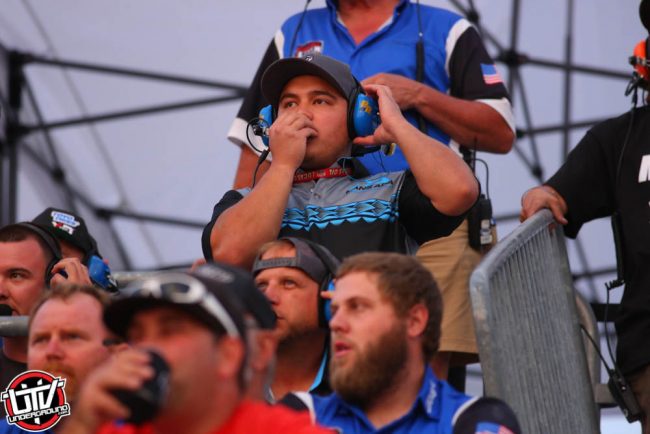 Thomas was unhappy about having his qualifying time erased at the start of the event. Despite having to start midpack, Thomas made quick work of his fellow competitors and scored the final spot on the podium when Barry blew the final turn.

“I was a little frustrated at first, but I put my head down and started picking them off one by one,” said Thomas. “I tried to stay smart and stay out of trouble. We got a lucky there on the last turn. He got up on the bike and we just nosed him out. Sometimes that’s what you need.” 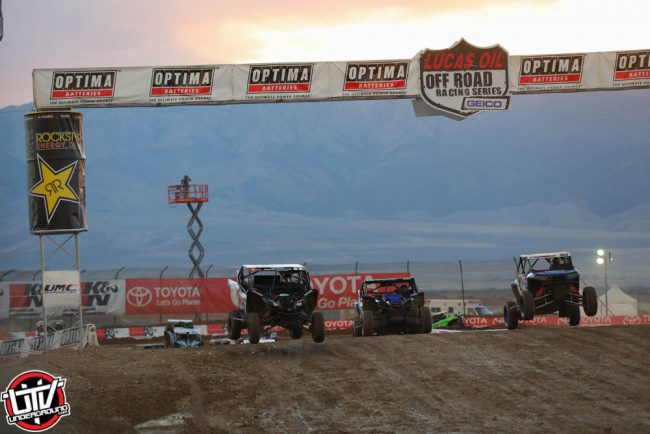 In Saturday’s Production 1000 UTV race, Cheek started on the front row and took the lead at the start. Though led every lap of the race, Barry dogged Cheek throughout the 12-lap contest. Barry was second, ahead of Heger. Thomas and Ronnie Anderson rounded out the top five. Cheek swept the weekend and also earned the UTV Underground Fast Lap award in both races.

“Nathan was on me that whole race,” said Cheek. “I could feel him pushing me into turn one. He turned me and got a couple of looks and I knew he was getting a little too close. Thankfully I was able to hold him off.” 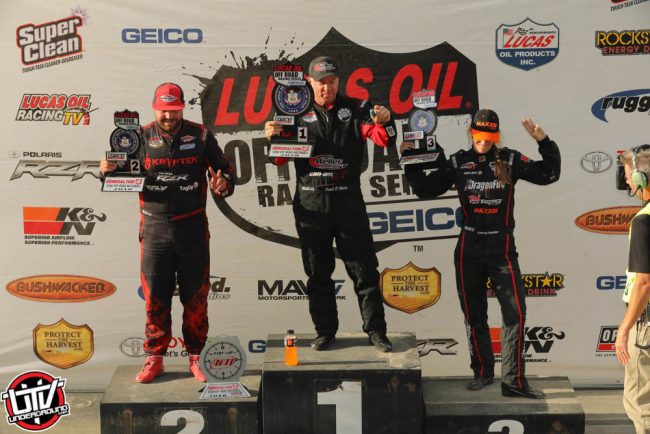 Barry was on Cheek’s bumper several times and got a run on Cheek in turn three. His runner-up finish was his best of the season.

“My nerves were above the roof on this one,” exclaimed Barry. “I’ve struggled a lot in the nationals this year so it feels good be back up here. I was trying to find every single way I could to pass him. I did anything I could do to try to make him make a little mistake.”

With his third-place effort, Heger kept his podium streak alive and has finished in the top three in all eight races this season. He retains the points lead by 63 over Cheek. 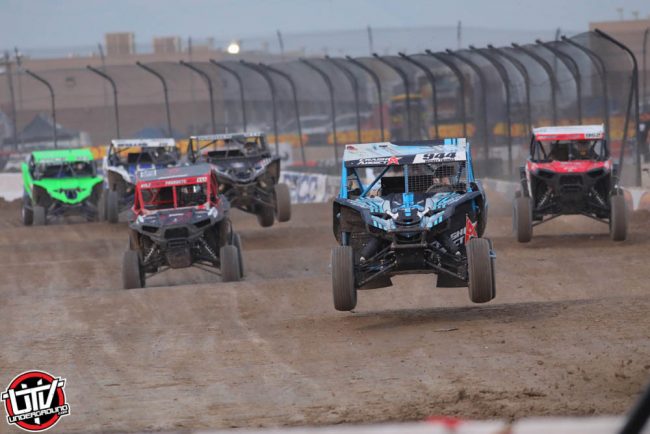 “I started pretty deep in the field and with these guys on the front row, I knew I had to get my work done early to catch them,” said Heger. “Myles was on it all weekend and Nathan was fast. All in all, it was a good weekend. Yesterday was sketchy and I was on the bike quite a bit. We made some changes and here we are.”

In Friday’s Turbo UTV race, O’Brien took the lead at the start with fast qualifier and teammate Weller in tow. Trevor Leighton took third and followed the Weller Racing duo for most of the race. On the final lap, Weller had a mechanical issue, putting Leighton second at the finish. Weller nursed her Can-Am in for a third-place finish. Dan Kelly and Cheek completed the top five. 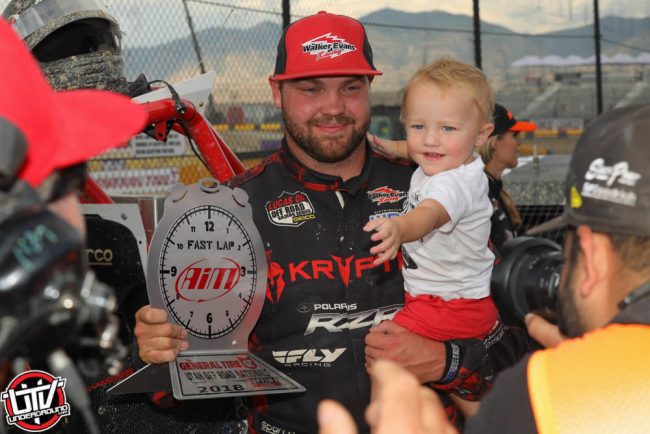 “The track is very tight and technical, and there are lot of ruts out there you can’t see,” explained O’Brien. “So you have to drive the car just hard enough to keep it going. This has been two years in the making and I’m really at the speed I am because of Corry. Every time we get close, it’s a great battle.”

Leighton’s Polaris RZR overheated with four laps to go, so he had to back it down. Then, with two laps to go, the machine cooled down and Leighton heated it back up, taking second and earning his first podium since winning round two. 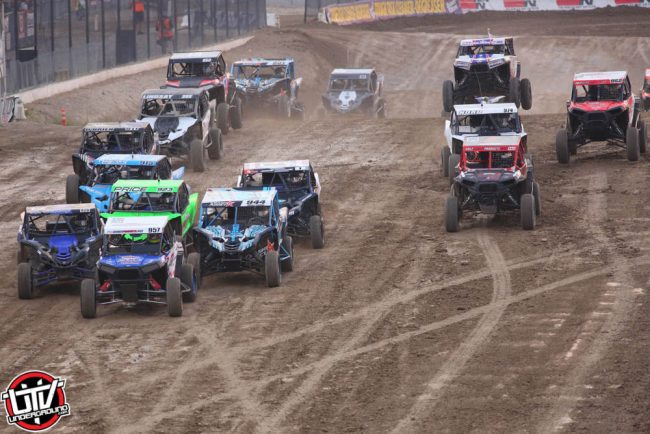 “I just wanted to get back up here on the podium, so I had my old Snocross mechanic fly up here to work on the car,” said Leighton. “I’ll take a second and look forward to tomorrow. It was a really close battle and I had fun racing with these guys.”

Weller lost an axle on the final lap and was happy to hang on to third and stay in close proximity to O’Brien in the points chase.

“It was kind of frustrating because we had a good practice, we qualified first, and we had a fast car,” said Weller. “This track is tricky; it’s hard to learn and to stay consistent. I lost an axle so I just put it into two-wheel drive and I was fighting it. I just wanted to hold onto the spot, get on the podium, and salvage some points because we have the tightest battle right now.” 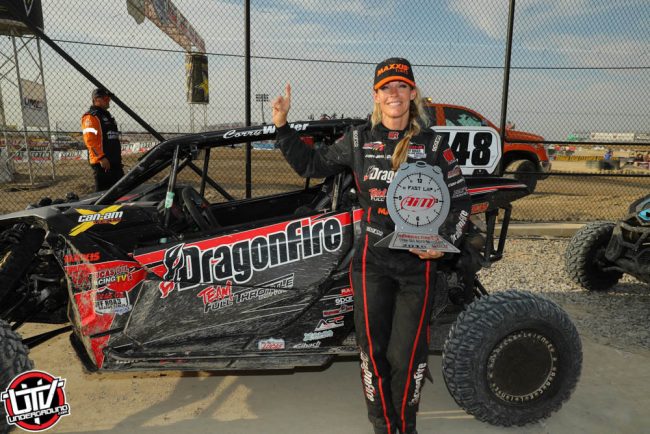 In Saturday’s Turbo UTV race, Weller muscled her way into the lead on the first lap and was never headed. Behind her, though, all hell was breaking loose as O’Brien, Elliott Watson, and Cheek were all fighting it out.

Cheek and O’Brien made contact on lap six, sending O’Brien spinning and Cheek to the back of the field after officials waved the black flag. O’Brien was moved back into third on the restart after the competition caution, and he battled past Watson on lap 10. 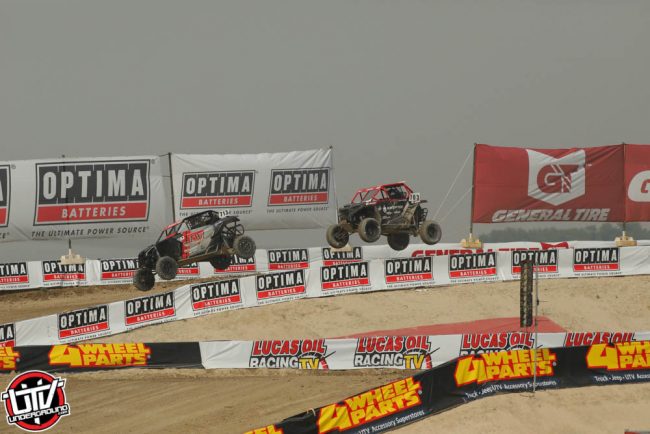 A caution on the final lap led to a one-lap shootout. Weller pulled away on the restart, leading O’Brien and Watson to the stripe. Leighton, who spun on the first lap after starting on the pole, went back and forth twice through the field before finishing fourth. Dan Kelly was fifth.

“I was really working hard on going fast and saving my equipment,” said Weller, who led a podium sweep by Can-Am Maverick X3s. “It’s really nice to see Elliott up here. Someone asked me yesterday if the Polaris has an advantage on a shorter track like this. I think after today, probably not. Congratulations to Can-Am for putting three on the box today.”

O’Brien said he and Weller are so close in times it’s hard to measure. In fact, after the race, the two are now in a numerical tie leading the points. 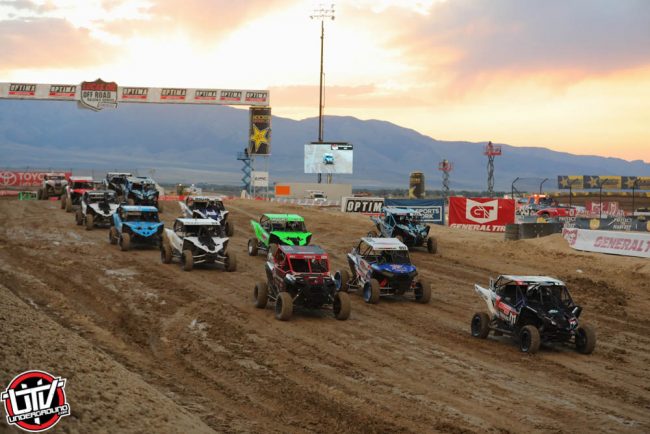 “We are so close; we’re talking thousandths of seconds in qualifying,” said O’Brien. “I couldn’t ask for a closer race, a better teammate, or a better team. It’s nice to see three Can-Ams up here right now. What does that say? The Can-Ams are doing pretty well.”

Watson has struggled this season and was happy to be back up front fighting it out. He earned his first podium since finishing third in round three. 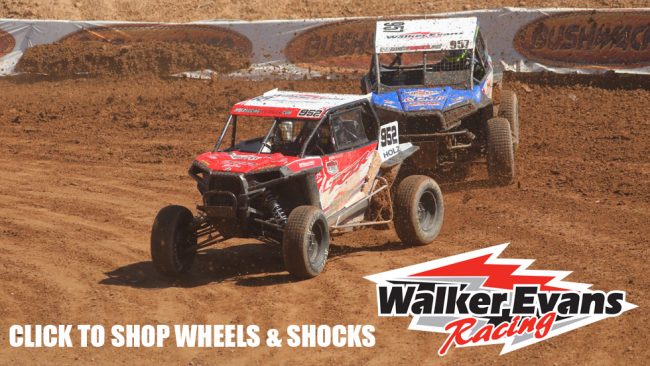 “We’ve been struggling this year, but we finally got a few things figured out coming into today,” said Watson. “It feels good to be at the front battling. Corry and Paul are so fast and it’s not easy for sure, but it sure is fun racing.”

The Lucas Oil Off Road Racing Series next heads to Glen Helen Raceway in Devore, CA. That doubleheader weekend is scheduled for September 21-22.