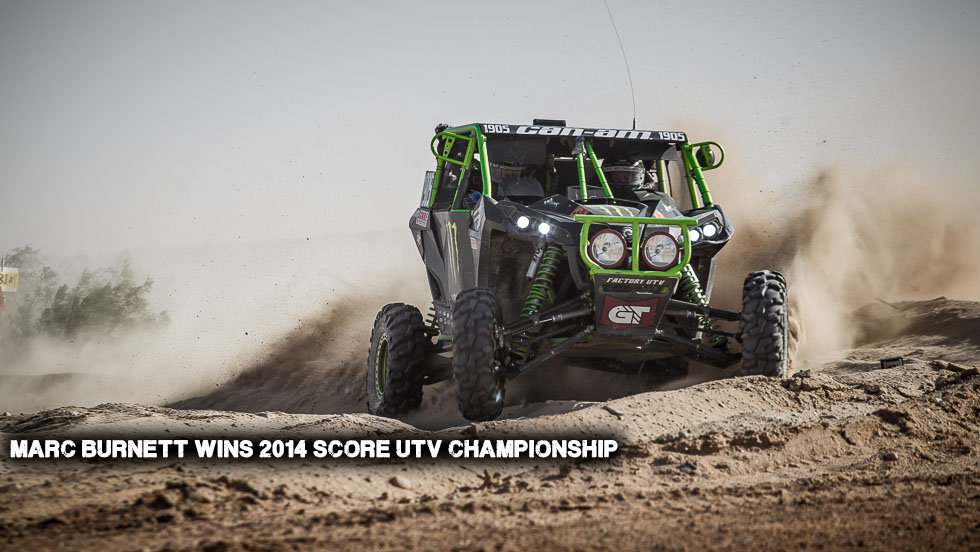 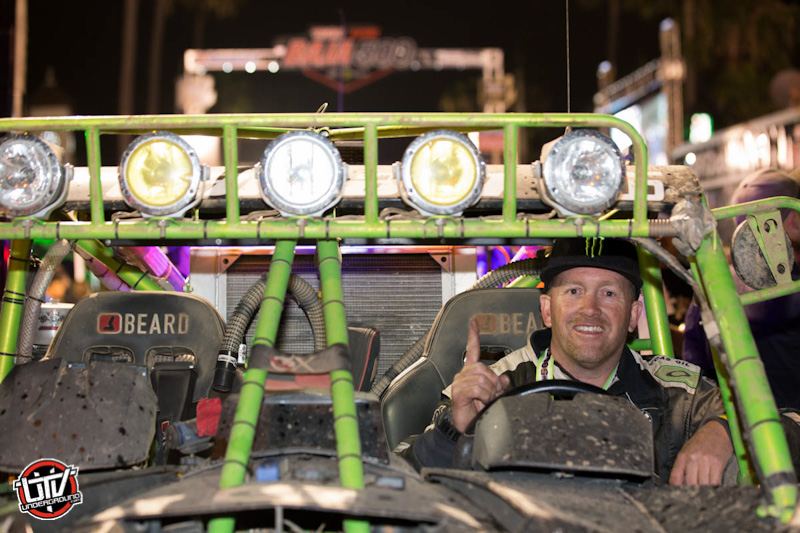 When Marc Burnett first contacted me in late 2012 and told me he was coming to the UTV class to race I thought it was pretty cool. A respected, experienced off-road racer who had proven himself in multiple classes was stepping in to join the UTV ranks. Then Marc and I started to talk and quickly I was like, “Marc, its not going to be a walk in the parK..” See, Burnett rolled in with all the confidence in the world that his knowledge of racing and his experience was going to immediately make him a top contender in the class. I knew Marc was going to have a much harder time then he was anticipating.

2013 was a bust season for Burnett. He broke, he lost and he was humbled. He also quickly began to respect the level of competition in the class. Marc went back to the drawing board. He and his MB Motorsports team started to address the issues that plagued him in 2013 and he started to approach the class as a UTV driver, not a truck driver. What I mean by that is Burnett up until this year really only had one gear and that gear was more in tune to what his old Class 7 race truck could withstand. Burnett had to slow himself down to make himself faster and in 2014 thats exactly what he did!

Marc Burnett came out guns blazing kicking off the season with a big win at the SCORE San Felipe 250. Marc followed up his performance at BITD where he would complete the grueling Mint 400 in 5th place. Burnett would head back to SCORE for the Imperial Valley 250 where he would once again find the podium finishing 2nd behind Can-Am teammates, Murray Racing. With 3 races in Burnett and the 1905 Can-Am Maverick would pack up and head south to the famed Baja 500. Burnett would put on a clinic running one of the fastest UTV races ever in Baja and taking his 2nd win of the season and his 3rd podium appearance. Burnett would then go test himself back at BITD at the Vegas To Reno. It would be hear that Burnett would suffer a horrific incident, one all UTVs fear, as a Trophy Truck would go off course and smash into the back of the 1905 Maverick causing it to burst into flames. Luckily everyone was ok and the Maverick was spared but not without some sever damage. Mark would get a 13th place finish and be forced to compete at the Score Desert Challenge race with a different machine. There he would finish 4th despite some insane weather and race conditions.

With the majority of the season under-wraps it would come down the last and biggest race of the year, the SCORE Baja 1000. Everything was on the line as all Burnett needed was a finish to lock up his first ever UTV championship. To make things interesting Burnett would opt to solo drive the race, doing it in memory of his late grandmother who had recently passed. With the Monster Mav back together, Burnett would charge hard into the 1275 mile Baja 1000 race course and challenge numerous times for the lead, at one point taking the lead before being passed back while down with a mechanical issue. Burnett while running 3rd late in the race would suffer a broken a-arm which would result in hours of downtime as he waited for his crew to find him and weld it back together. Burnett would finish in the allowed time limit thus clinching the 2014 SCORE Pro UTV Championship.

It was a huge year for the popular driver. Marc owes much of the credit to his team which consists of off-road legends Reid & Rick Johnson. The Johnson brothers are deeply rooted in off-road racing, their knowledge and talents were a large part in helping Marc secure the season championship. Congrats to the entire 1905 team!

We have more big news coming from the 1905 team of MB Motorsports, news that is sure to shake up the UTV class, but for now its all about their championship! 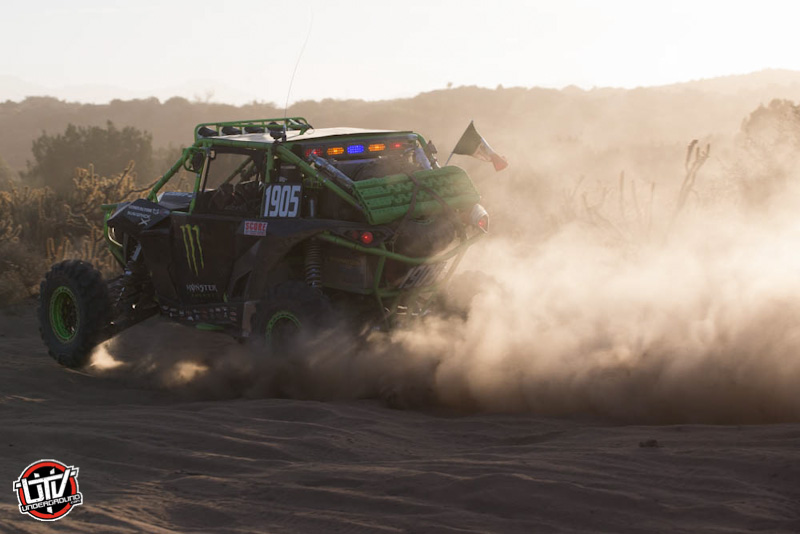 “We were impressed with effort put forth by all our teams, but especially Marc Burnett, who not only won the SCORE Class 19 championship with his Monster Maverick, but also completed the entire 2014 Baja 1000 ironman. With two wins on the year and then this final outstanding effort, he deserves a lot of credit for finishing strong,” said Jeff Leclerc, Racing Project Leader, Can-Am. “We were absolutely thrilled to see Cody Sappington’s Desert Toyz Can-Am Maverick earn a prestigious Baja 1000 podium spot with such a difficult course.”

The 2014 Tecate SCORE Baja 1000 featured a challenging course that snaked its way through the rugged desert and hit both coasts on the Baja Peninsula, winding 1,275 miles from Ensenada to La Paz, Baja California Sur, Mexico. Nineteen side-by-sides entered Class 19, but only eight finished in the allotted time.

Can-Am Maverick 1000R pilot Marc Burnett (Burnett Motorsports / Can-Am / Monster) came into the most prestigious SCORE race with the Class 19 points lead, having won both the Baja 500 and San Felipe 250. By simply finishing the extended Baja 1000 course, Burnett could wrap up his first career side-by-side championship for himself and Can-Am. However, he also decided to compete the Baja solo (ironman), driving more than 1,200 miles alone.

The No. 1917 team of Murray Racing / Can-Am / ITP was also in the running for the overall title, having reached the podium at the series opener and posting a win earlier in the year at the Imperial Valley 250. The final Can-Am team consisted of the No. 1904 Desert Toyz / Can-Am Maverick of Cory Sappington, who came into Baja fourth in the class standings.

Burnett battled the entire race, competing much of it in the top five and at one point (San Ignacio region) held the lead in his No. 1904 Maverick. Baja is as much about luck and mechanical survival as it is skill and horsepower. Burnett, like many teams, was faced with issues he had to overcome, from extreme fatigue to navigational challenges to both scheduled and unscheduled mechanical fixes. Despite the circumstances, he was in third place and pushing for the podium at the 1,100-mile marker before hitting a nasty silt bed. It was here on the course, where Sappington found his way around Burnett and moved into third. Burnett knew he only had to finish to capture the title, so he valiantly drove on, overcoming another delay, to the finish line and the 2014 SCORE Class 19 championship.

“This year’s Baja 1000 was a true Baja challenge. The course was 1,275 miles of pure hell. I was definitely feeling the burn coming into the finish. A lot of people said there was no way I could ‘ironman’ this race, but boy did I prove so many people wrong,” said Burnett. “This season is dedicated to a very special lady, my grandmother, who passed away 11 months ago. I want to thank my team (and) my cousins for all their hard work throughout the year. I couldn’t have done it without them. I also thank all my key sponsors and Can-Am for giving me the opportunity to race one of their machines.”

Sappington’s Desert Toyz Maverick MAX outlasted much of the competition and withstood the gnarly terrain while running another consistent race. The team, which was outside of the top five at certain points, maintained its composure and patiently completed the grueling course in a time of 37:15:07.188. That finishing time was good for third on Class 19 (Pro) SxS class podium.

“This is the first time having my own crew and car and we’re thrilled to finish and make the Baja 1000 podium,” said Sappington. “We pushed it for 1,275 miles, for 35-plus hours of 8,000 RPM and not a hiccup. The Maverick MAX ran awesome – super tough! I can’t believe how much punishment we put this near stock vehicle through and it held strong.”

About BRP
BRP (TSX: DOO) is a global leader in the design, development, manufacturing, distribution and marketing of powersports vehicles and propulsion systems. Its portfolio includes Ski-Doo and Lynx snowmobiles, Sea-Doo watercraft, Can-Am all-terrain and side-by-side vehicles, Can-Am Spyder roadsters, Evinrude and Rotax marine propulsion systems as well as Rotax engines for karts, motorcycles and recreational aircraft. BRP supports its line of products with a dedicated parts, accessories and clothing business. With annual sales of over CA$3 billion from 105 countries, the Company employs approximately 7,100 people worldwide. 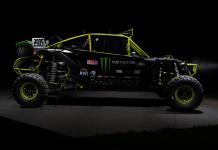