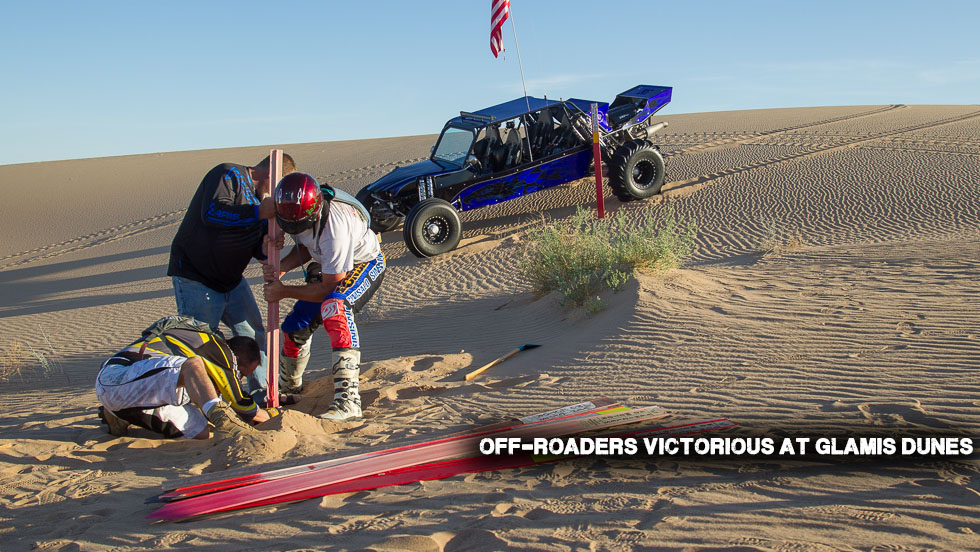 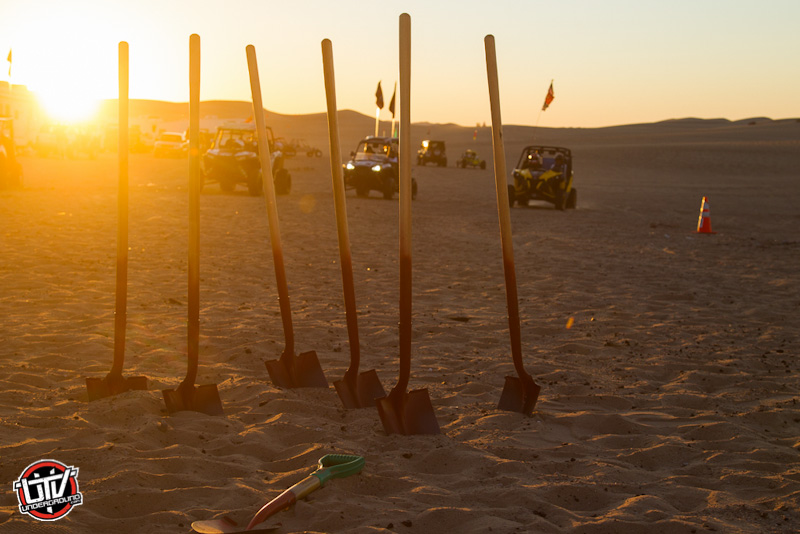 Fourteen years ago, a forty-nine thousand acre section of the Glamis Dunes was closed down for off-road use, primarily siting the protection of an endangered plant called Peirson’s Milk-Vetch (PMV). The closure, which was prompted by a lawsuit brought by The Center for Biological Diversity, the Sierra Club and Public Employees for Environmental Responsibility, has been a long fought battle headed by The American Sand Association (ASA) alongside the Bureau of Land Management (BLM), U.S. Fish and Wildlife Service and multiple other off-road organizations.

The land opening is one of the most historical events in favor of off-road enthusiast in recent history. The opening gives off-roaders access to treasured riding spots like: “The Wall”, The Ledge and the Airplane Crash Site.

The Milk-Vetch keeps coming up in environmental battles in the California desert because the genus Astragalus. With about 3,000 species throughout the Northern Hemisphere, the plants biggest advisories are not off-roaders, rather the ongoing development boom in including, solar and wind turbine farms.

Furthermore, the plant can grow in seemingly hostile environments like sand dunes because they can take nitrogen from the air and use it as a nutrient, so they can grow virtually anywhere. The Milk-Vetch seeds can sit dormant, buried in the sand undetected until their tough coat is scarified or scratched up allowing water to penetrate the seed and spur germination. So in fact, off-roaders could be actually be adding to the process of spreading the Milk-Vetch by contributing to the germination process. Also know as Locoweed by farmers because of its adverse effects on livestock, large Milk-Vetches seeds secrete toxic chemicals. When the Peirson’s Milk-Vetch was listed as a endangered plant, it was immediately met with opposition by the off-road community due to the fact that the plant seemed to be abundant and more effected by rainfall than off-road vehicles. 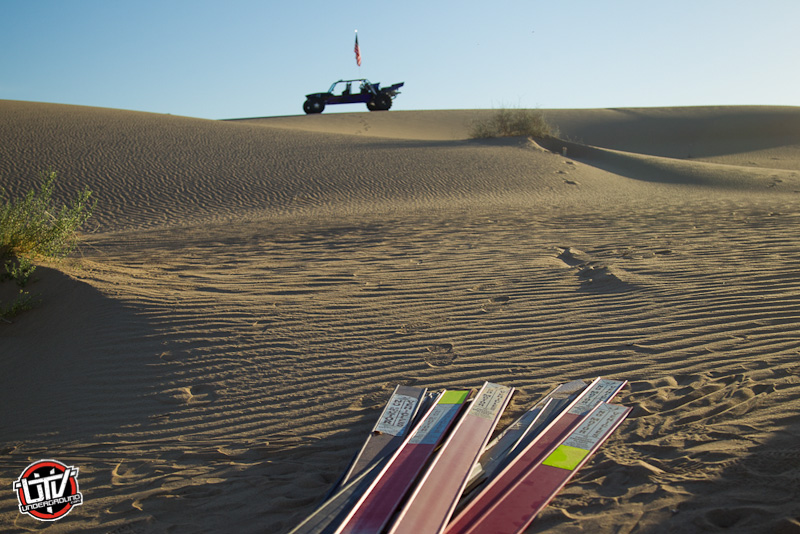 On the morning of Saturday May 3rd, hundreds of off-road enthusiast volunteered their time to pull up the stakes outlining the closed area. Volunteers were handed shovels and stake pullers and sent out to pull up the boundary markers, officially opening the areas back to off-roaders. The ASA in conjunction with the BLM organized the event and Polaris Industries, Coyne Powersports, Mamma Jeannie’s Pizza, Fullerton Powersports, and The Glamis Beach store all donated water, food and free t-shirts to volunteers.

Among the volunteers was Freestyle Motocross champion Ronnie Renner. “I love riding in Glamis. I have only been coming here for a few years but I am out here freeriding and spending time with my family at least ten times a year! I think it’s important for me to do my part in helping bring awareness to the ASA and the opening of more dunes for riding,” commented Renner.

Spirits were high but tempered by the fact that there is still a strip of land still closed, blocking primary access to other open areas such as Patton Valley. “This is a significant precedent setting victory in our ongoing battle to open our lands for responsible recreation use to off-roaders. We have won a battle but the fight is far from over, now more than ever we need your help. Join the ASA, donate money and time to help keep your lands open for generations to come,” Stated Nicole Nicholas Gilles of the ASA. 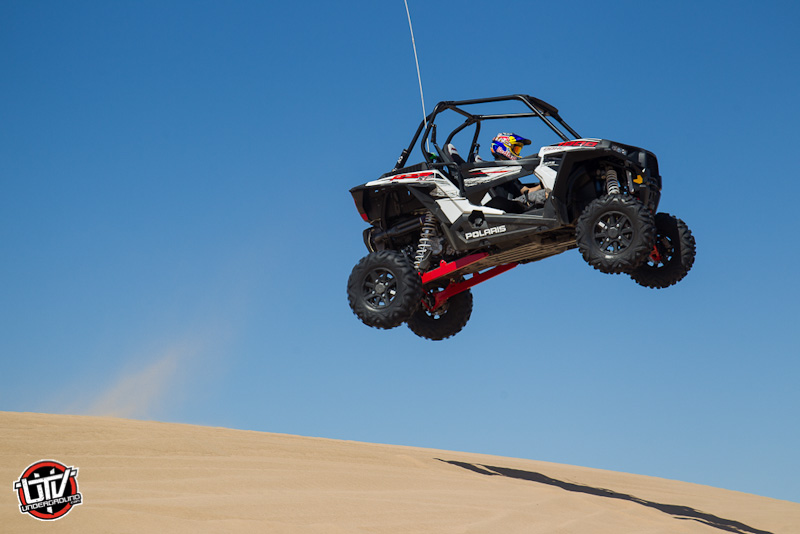 Even though numbers of visiting off-roaders have been in decline over the past several years, over one million visitors come to Glamis a year, creating a regional impact of over three hundred million dollars annually according to the ISDRA. During October 2005 to May 2006 in the gateway communities of Blythe, Brawley, El Centro and Yuma dunes, visitors spent between $577 million and $1.28 billion. Clearly, the opening of this area will allow more off-roaders to come and enjoy Glamis, growing the already massive positive economic impact of off-roading in the region.

After the stake pulling was complete, we celebrated by throwing down a little session with Ronnie Renner in his Polaris RZR and KTM. 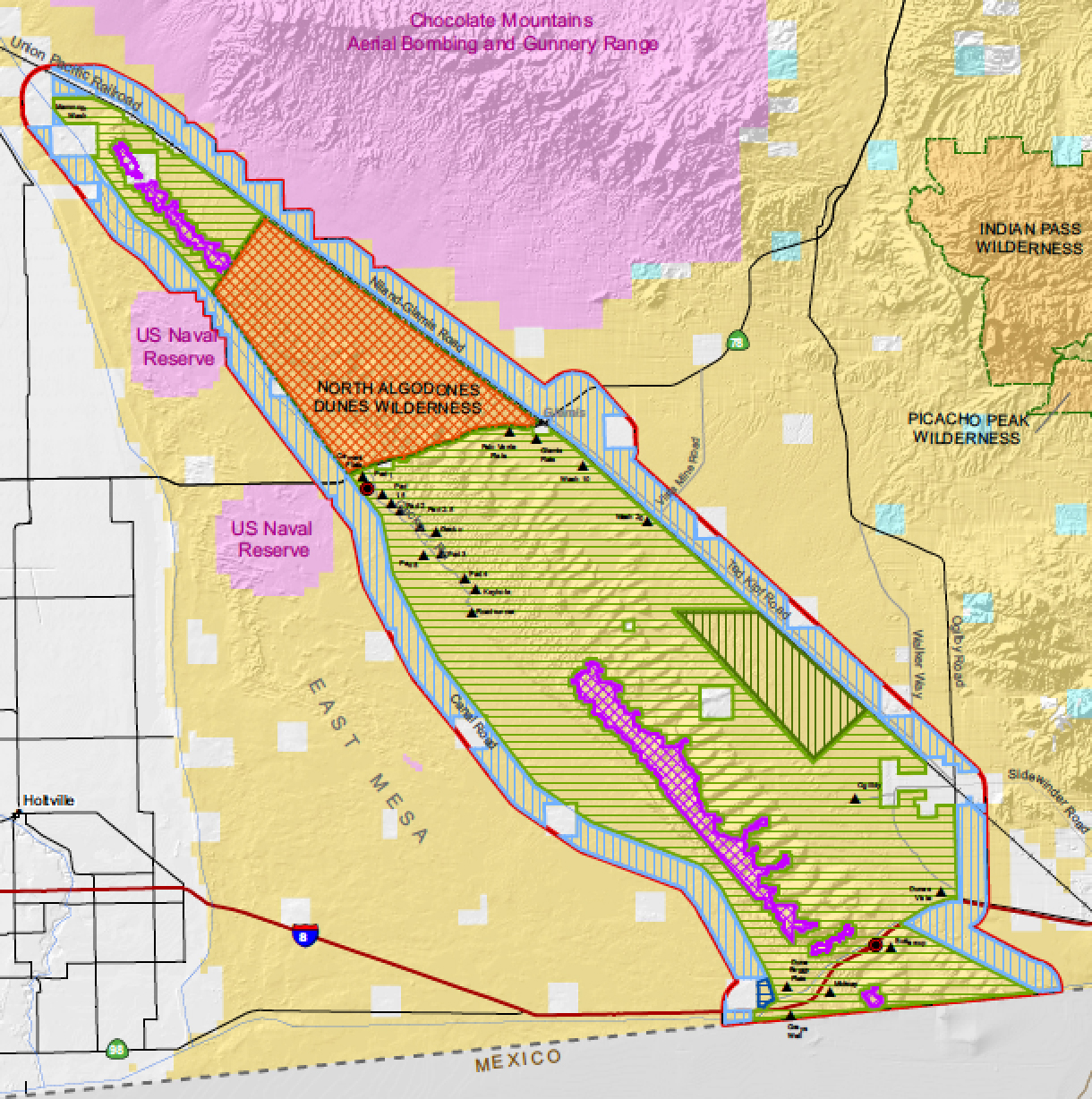 The purple area shown in this diagram are the remaining closures.

Do your part and join and donate to the ASA today to keep Glamis open for generations to come.

Peirson’s Milk-Vetch and map photos provided by the Bureau of Land Management.