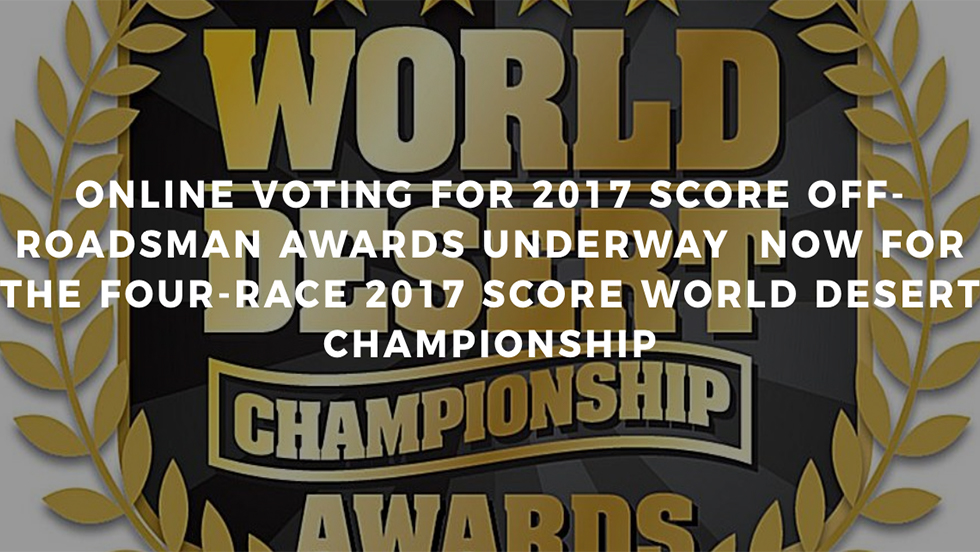 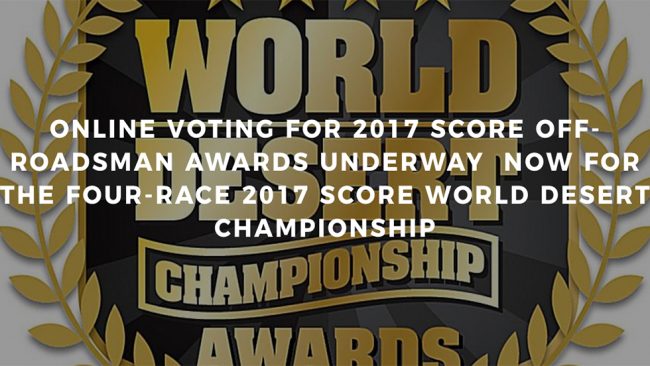 SCORE AWARDS NIGHT
SCORE International will celebrate on Saturday, Jan. 13, 2018 at the popular San Diego Air & Space Museum at the historic Balboa Park, during the 2017 SCORE World Desert Championship Awards Night. The popular museum is located in the heart of San Diego.

At the San Diego Air & Space Museum, nearly 500 SCORE racers, family, friends, crews, sponsors and media will bask in the Southern California sunshine as the SCORE Awards Night will honor the history and fame of the name which is the standard for desert racing worldwide while celebrating the four-race 2017 SCORE World Desert Championship.

This will be the first time that the annual SCORE Awards Night will be held at the San Diego Air & Space Museum and the ninth time the historic evening will be held in Southern California since 2000, when it was held at Joe’s Garage automotive museum in Tustin, Calif. It will also be the eighth consecutive year in SoCal for the popular event.

“These evenings are always very special,” said Roger Norman, completing his fifth year as the SCORE CEO/President. “It is a great time of tribute and reflection for racers, families and crews to get together and celebrate another amazing SCORE racing season. This was the fifth year for my wife Elise and I to be overseeing this international treasure we call SCORE and the San Diego Air & Space Museum will provide a very memorable environment to honor the achievements of the world’s greatest desert racers.”

TASTY TICKETS
Tickets priced at $89 per adult and $69 per child 12 and under, are being solid online at
2017 SCORE Awards Night Tickets here or by calling the Audreonna Cuarez, SCORE Registration and Membership Director at 775.852.8907. Payment may also be made by check sent to the SCORE International Reno, Nevada, USA office. Arrangements through Ms. Cuarez may also be made to reserve tables of eight or 10 guests.

A pre-awards reception will start the festivities at 6 p.m., followed by the dinner at 7 p.m. and presentations starting at 7:30 p.m.

EARLY ENTRY
Guests at the event will be allowed to enter the museum at 5:30 p.m. to view the numerous historical displays at the popular facility prior to the start of the reception at 6 p.m.

AWESOME AWARDS
In addition to the special SCORE Achievement Awards and the Pro and Sportsman classes that qualified racers for class season championships along with five overall point champions who will be honored. Another highlight of the evening will be the presentation of the annual SCORE Off-Roadsman of the Year Awards.
Individuals as well as manufacturers and organizations are honored through 14 distinct SCORE Off-Roadsman of the Year Awards. Among the awards to be presented are SCORE Rookie of the year, SCORE Contingency Company of the year, SCORE Pit Support Team of the year, SCORE Mechanic of the year and SCORE Person of the year.
Another element of the diverse program for the evening will be the presentation of the 2017 SCORE Milestone Awards. As it has for 32 years, the coveted SCORE Milestone Awards are presented to those racers who finish every required mile of the 2017 SCORE World Desert Championship. A total of 31 racers completed all 2,057.97 required miles in the four-race 2017 SCORE World Desert Championship.
The evening will include a colorful video/photographic tribute to the 2017 SCORE World Desert Championship produced by BCII TV, SCORE Live and GetSomePhoto.

EL REY NETWORK
The four-race 2017 SCORE World Desert Championship in Baja California, Mexico along with the SEMA SCORE Baja 1000 Experience and the SCORE Baja 1000 Qualifying in Las Vegas have all been airing on El Rey Network in the United States. International distribution is by way of syndication. The season-ending 50th BFGoodrich Tires SCORE Baja 1000 will have a two-hour show produced while the other race shows were each one-hour telecasts. The Las Vegas event will air at 2 p.m. PT on Monday, Jan. 1, 2018 and the race show will air at 2 p.m. PT on Sunday, Jan. 14, 2018.
El Rey Network is available in 45 million homes across the country through cable and OTT providers and via satellite on DirecTV Channel 341 and Dish Network Channel 253. For more information on how to watch El Rey visit http://elreynetwork.com.

DUST 2 GLORY
From award-winning documentary filmmaker Dana Brown, ‘Dust 2 Glory,’ premiered successfully on over 550 screens in the United States on Dec. 6.
The Mexico premiere will be held at 27 Cinepolis theaters in Baja California and mainland Mexico.
The documentary chronicled each of the four races in the 2016 SCORE World Desert Championship. D2G, which began shooting at the 2015 SCORE Baja 1000, continued up close and personal coverage capturing the robust racers in their amazing adventures in Mexico’s majestic Baja California peninsula through all four spectacular 2016 races. Executive Producer is BCII’s Bud Brutsman.

D2G MEXICO PREMIERE TICKETS
The dates – January 16, 17 and 18 – will vary by theater/city. Some theaters will show it just once during one of these days, some may show it on two or all three of the days, and some may show it multiple times per day. The website link below shows available days/times by theater.
Like the U.S. premiere, tickets may be purchased in advance on this website. Space available, tickets may be purchased on-site at the individual theaters on the day/time of show.
The website site to identify cities and locations where the documentary will air in Mexico is http://www.cinepolis.com/contenidos-alternativos/pelicula/dust-2-glory.
The version that will be shown in Mexico will be the same released in the United States last Wednesday and will have Spanish sub-titles on the screen.