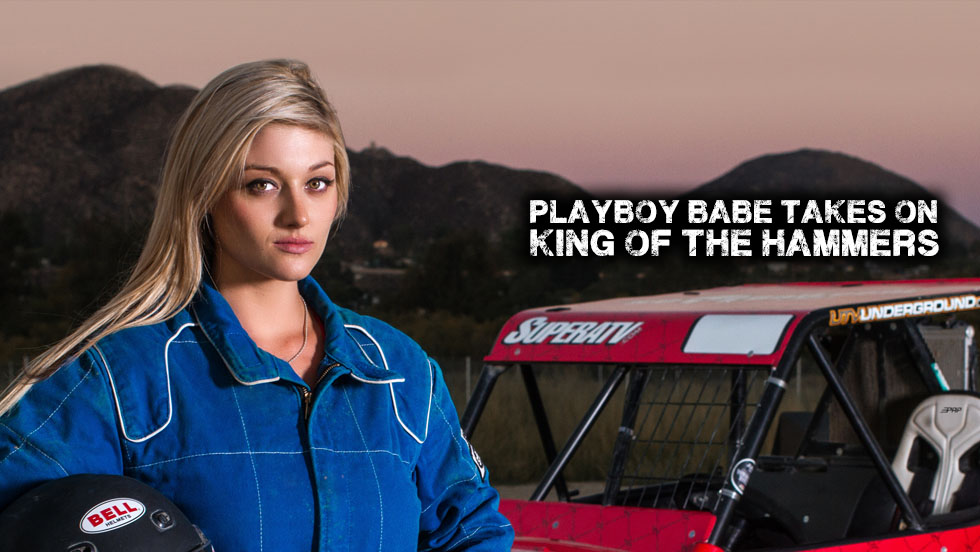 Playboy Babe takes on King of the Hammers!

Cute, sweet, chat’s to anyone with a nice smile, everybody loves Katie Vernola. Oh, yes, and she is a former Playmate of the Month which definitely doesn’t harm her popularity in testosterone-filled places like Johnson Valley in the first week of February.

If you know what the Lucas Oil Regionals are and you know what King of the Hammers is you’ll understand that the latter is a huge step up and is definitely not for the faint hearted… or under-prepared. Luckily Katie and her driver step-dad Chris Chapman went out a few weekends before the race in their Polaris RZR XP 1000 to drive some of last year’s course and saw just how hard the standard parts were beaten. 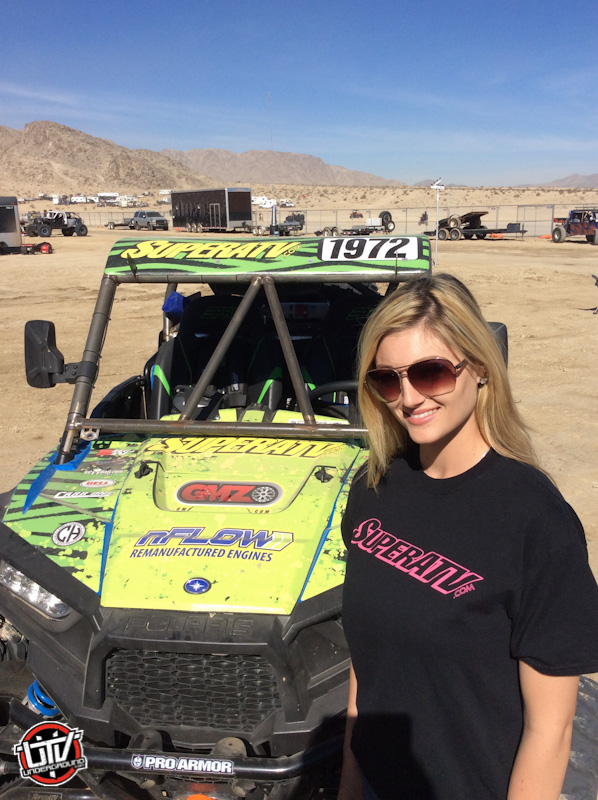 “We already had a KoH legal cage made by Brian Carr of Carr One Fabrication in Lake Elsinore, Racer-X radios, Dynojet power commander and the best filters on the market; K&N… but seeing the damage after our first time out on he hardest trail either of us had ever seen I needed to make a call to my main sponsor SUPERATV.com and they stepped up for us with some serious upgrades. They sorted us out with high clearance a-arms, rhino axles, high clearance radius rods and a heavy duty steering rack. With higher ground clearance and new parts, we went back out for another pre-run and everything seemed to be dialed in just right. Walker Evans Racing set-up the shocks perfect high speed and rock sections. GMZ Race Products got us a set of their 30″ Kahuna tires on 14″ Liteloc wheels. PRP seats provided us with the best seats there are, plus seat belts and bags to carry all our tools. Pro Armor provided us a spare tire mount and front and rear bumpers. KoH is so hard that even for the Sportsman Class this is what you need to do for your ATV!”

“At the drivers meeting Tuesday I felt like we were under-prepared and that’s when the nerves hit me. I would be getting out winching, navigating and helping with any trail repair we needed none of which you need in the Lucas Oil races! I was practicing winching so much that one day I thought that all my hands would be covered in blisters. Something else unique to KoH is that it is such a massively long lap that you need to have people waiting for you at four different pits! We didn’t have that many people in out team! Fortunately Chris at American Rock Rods offered to help pit for us and their knowledge of the race was just what we needed to pick our heads up for the next day’s race. Starting positions were drawn randomly and we ended up on the pole for Sportsman Class so I knew if I could keep my step-dad calm and keep a steady pace, we would have a great chase of finishing. Our goal for our first year was just to finish.” 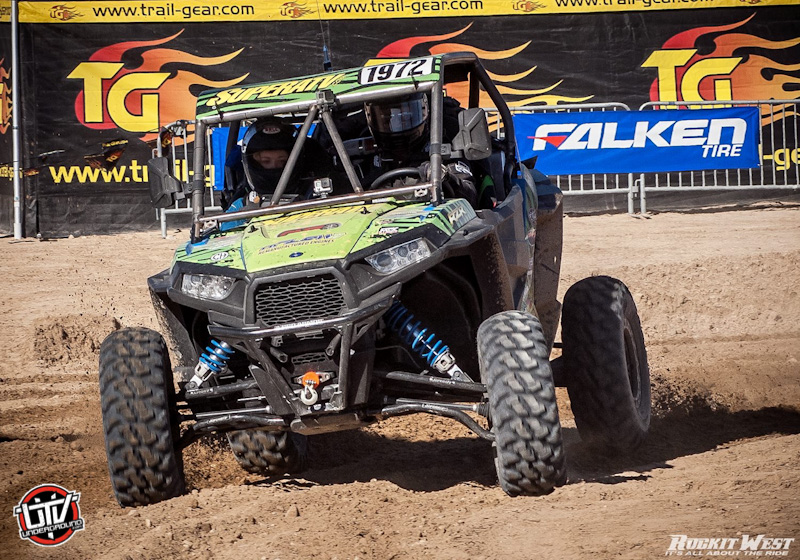 “Then the green flag dropped… and we were racing for all of about ½ a mile before we got stopped behind a long line of Pro Class ATVs that had got stuck and jammed on the first hill leaving Hammertown. We quickly found an alternative way around the broken car then we were off! A highlight for me was coming into the first pits with the media helicopter right in front us, just a few meters off the ground. The American Rock Rods crew had a quick check and we were out again keeping a steady pace through the desert of about 55-60 mph to get to the first rock crawl at Crowbar which was single file through the tight valley. Already we had passed many broken ATVs that were pulled off to the side so we knew that the key to the race would be not to break anything. That’s not too easy here though…”

“In the rocks heading back down to Hammertown the way we wanted to go was blocked with more stuck Pro Class ATVs so to get around we chose to take the much harder route called Ballerina Rock. It had a 4ft tall drop-off off the end of it and we were sure that we were going to go end over end, but we made it and the impressed guy at the checkpoint said that we were only the 2nd ATV to come through that way! There was some more good news at the next pit too. Thanks to us going around the traffic jams rather than waiting in line we were running 8th overall… in both classes, not just Sportsman! And because we were doing so well we decided to take it a little easier seeing as we were at Race Mile 50 and there were still 70 something to go… but KoH doesn’t care about anyone’s hopes and plans and going up Aftershock a loud snap was the front diff giving up. I was very upset and was wanting to keep going but there was no chance we could carry on without 4 wheel drive and we limped back to Hammertown with just enough time to see that only 3 UTV’s had finished the race, out 53.” 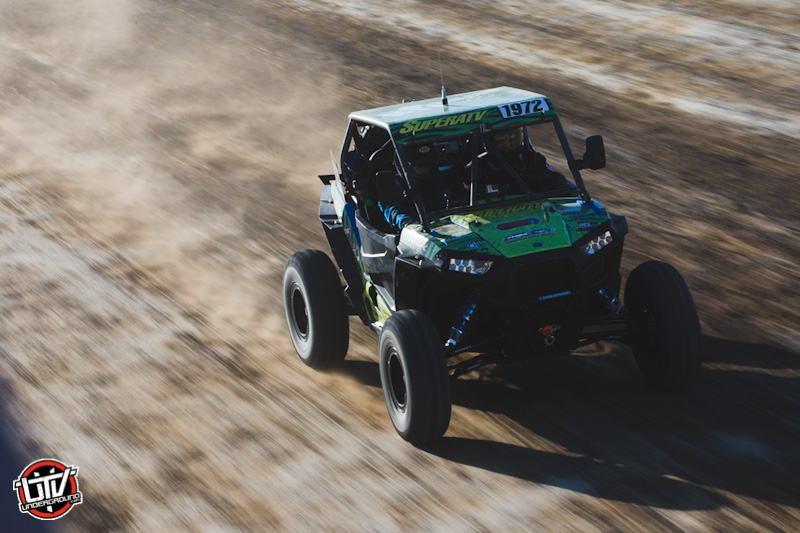 “Looking back it was very eye opening and I can’t believe we made it up some of the sections we did, which is awesome, and I can’t wait to get into more forms of racing now… although after the adrenaline had worn off my neck and shoulders made it feel like I’d been in a car crash!”

“I will be back next year and the plan will be to to get out front as soon as possible to avoid all the pile-ups on the rocks.”