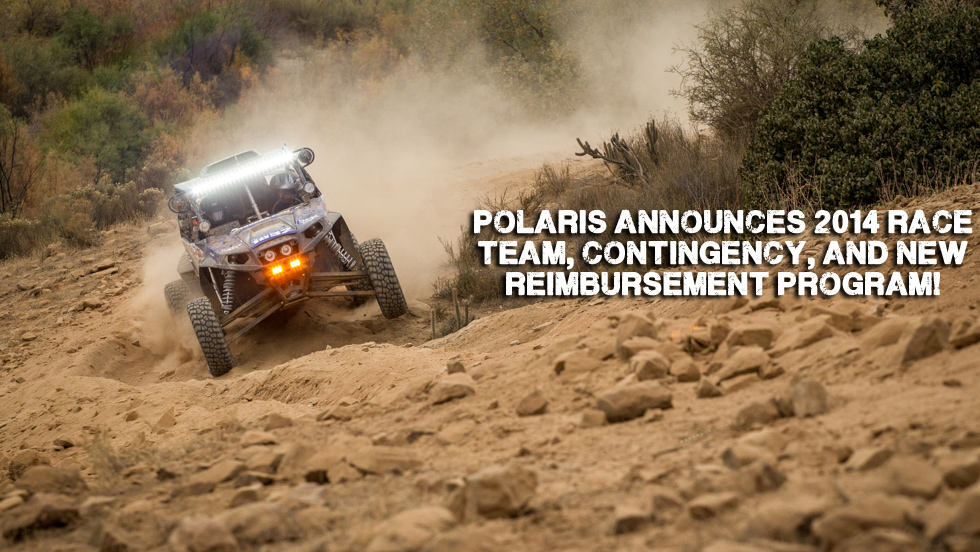 Minneapolis, January 2, 2014 –Polaris comes into the 2014 off-road race season with teams competing in the Grand National Cross Country series (GNCC), World Off-Road Championship series (WORCS), Best in the Desert (BITD), SCORE International, Lucas Off-Road Regional Racing Series (LORRS), King of the Hammers (KOH) and Mud racing. The company has expanded its race team once again for 2014 both in RZR racing and with the addition of two GNCC ATV Racers racing the Scrambler XP 850 H.O. EPS. Polaris will continue continue to offer their ATV and Side-by-Side contingency, and has added a reimbursement program on select models.

“After another highly-successful race season, Polaris decided to expand its factory race team for 2014,” said Donna Beadle, race team manager for Polaris’ Off-Road Division. “We are very excited to return to ATV racing in GNCC, and our RZR teams are even stronger this year.”

GNCC
Polaris has expanded its presence in the GNCC Racing Series both with the addition of two ATV Racing Teams and the expansion of their RZR racing program. Team UXC Racing has joined forces with Polaris with six-time National Champion Michael Swift piloting a Scrambler XP 850 H.O. EPS in the Pro 4×4 class. UXC Racing’s West Coast Team of Swift and Don Higbee will take on the BITD series on Scrambler XP 1000 EPS. Higbee also will attend a few GNCC races when time permits. UXC Racing also will enlist Chris Robinson to take on Texas in a Scrambler XP 1000 EPS. Team UXC/Driven PowerSports race team also will be fielding a Polaris RZR 900 for the 2014 UTV races.

Also signed for the 2014 GNCC season on the Scrambler XP 850 H.O. EPs is Rick Cecco. Cecco saw great success racing a Scrambler during the 2013 season in a myriad of racing series and turns his focus to the Pro 4×4 Class in GNCC for 2014.

Polaris will continue to support National Guard/Polaris/Coastal racing for 2014. William Yokley took the GNCC XC1 Modified UTV championship again in 2013 in his Coastal Racing RZR 900 and will look to six-peat in the GNCC series this year. Yokley’s teammate, Scott Kiger finished fourth in his RZR 900 and also is back for 2014.

BITD
After taking the 2013 Pro UTV Championship, Jagged X is back for 2014 racing the familiar No.1919 RZR XP 1000, in the Pro Class. The No. 1931 car will also will compete in all six BITD races with Polaris General Manager of RZR Off-Road Vehicles Craig Scanlon as the Driver of Record.

Holz/Coastal Racing also is back for 2014. The Holz Coastal Racing RZR XP 1000 will be piloted by Kiger and Mark Holz as they look to bring home their second Pro UTV Championship.

Polaris also has added Justin Lambert of Cognito Racing to their 2014 RZR BITD Team. Lambert had a great 2013 season and looks to take the 2014 championship in a RZR XP 4 1000.

SCORE
After taking the first-ever Pro UTV Championship in SCORE, Jagged X will be back with Matt Parks and Jason Spiess competing in the six-race SCORE series in the No.1932 RZR XP 1000.

WORCS
Beau Baron, who won the SxS Pro Production championship in 2013, Ryan Piplic, who finished second, and RJ Anderson are back for 2014. All three racers will run RZR XP 1000 units.

SxS Production 1000 Champion, Mitch Guthrie Jr. also has signed on with Polaris this year to run the SxS Pro Production class in a RZR XP 1000.

High Lifter
Team High Lifter-Polaris Racing will be muddin’ on Polaris’ once again for 2014. Racers include Brian Haughton, Josh Monroe and Adam Schumaker and will race the Sportsman XP 850, Sportsman 550, RANGER XPs and RANGER RZRs.

Lucas Off-Road Racing Series
With the popularity of RZRs in the LORRS series, Polaris has added two teams for 2014. Cody Rahders, who won a championship in LORRS last year and has run for Polaris in WORCS for the past two years, will run a RZR XP 1000 in the series. Team Wolfpack, who ran RZR 900s in LORRS for 2013, will also run RZR XP 1000s.

Polaris Contingency and New Reimbursement Program
New for 2014, Polaris is offering a Reimbursement Program for new 2013 or 2014 Scramblers and RZRs purchased after Sept. 1. 2013. Racers interested in this program will receive a $1000 reimbursement at the end of the season as long as they competed in more than half of the qualifying events (GNCC, WORCS, BITD, SCORE and LORRS). The reimbursement will be limited to the first 50 qualified submissions.

More information and complete rules about Polaris’ Reimbursement Program and racing contingencies can be found at www.polarisfactoryracing.com.

About Polaris
Polaris is a recognized leader in the powersports industry with annual 2012 sales of $3.2 billion. Polaris designs, engineers, manufactures and markets innovative, high quality off-road vehicles, including all-terrain vehicles (ATVs) and the Polaris RANGER® and RZR® side-by-side vehicles, snowmobiles, motorcycles and on-road electric/hybrid powered vehicles.
Polaris is among the global sales leaders for both snowmobiles and off-road vehicles and has established a presence in the heavyweight cruiser and touring motorcycle market with the Victory and Indian motorcycle brands. Additionally, Polaris continues to invest in the global on-road small electric/hybrid powered vehicle industry with Global Electric Motorcars (GEM), Goupil Industrie SA, and internally developed vehicles. Polaris enhances the riding experience with a complete line of Polaris and KLIM branded apparel and Polaris accessories and parts.
Polaris Industries Inc. trades on the New York Stock Exchange under the symbol “PII”, and the Company is included in the S&P Mid-Cap 400 stock price index.
Information about the complete line of Polaris products, apparel and vehicle accessories are available from authorized Polaris dealers or anytime at www.polaris.com.

[HOONIGAN] Jump Cuts: SENDING IT in the Streets of Long Beach!...