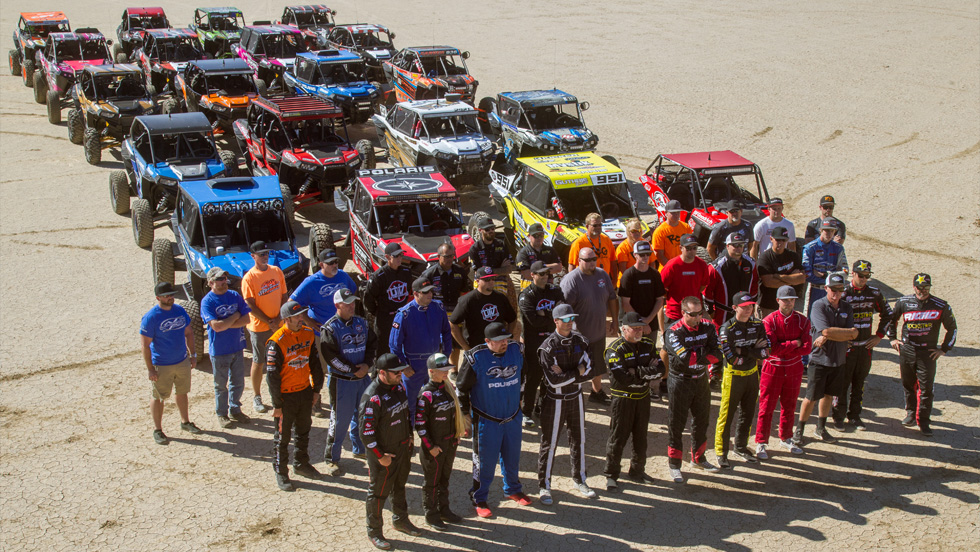 Minneapolis, Jan. 6, 2017 – Polaris is excited to launch their 2017 RZR Factory Racing program, with an unprecedented level of support and focus. Polaris RZR is the winningest brand in side-by-side racing, and the RZR Factory Racing team is home of the reigning champions of Best in the Desert (BITD), King of the Hammers (KOH), The Mint 400, and SCORE Baja 500 and Baja 1000. 2016 saw countless victories for the team, including 21 podiums in BITD, six of seven BITD first-place overall UTV wins, 12 podiums in SCORE International, three of four SCORE International first-place overall UTV wins, and many additional victories in WORCS, GNCC and KOH.

The 2017 racing season promises to hold plenty of excitement for fans of UTV racing, with both veterans and rookies battling for victories in series across the country. Justin Lambert and Cognito Motorsports are looking to keep a seven-race first-place winning streak alive in the BITD series. Lambert will defend his 2016 BITD championship against an increasingly competitive field, while honing his winning technique in an all-new 2017 RZR XP Turbo. Husband and wife team, Wayne and Kristen Matlock hope to continue their SCORE and BITD victories with a revamped 2017 program. Wayne will defend his streak of Baja wins, with his eye on a 2017 Baja 1000 victory, following his mechanical issue near the finish of the 2016 race. Kristen will continue to serve as an inspiration to female off-road racers everywhere as she defends her SCORE and BITD podiums, and continues to race solo as an “Ironwoman” in Baja. Branden Sims rolls into 2017 following a banner year where he added a BITD Pro Turbo class season championship and Baja 1000 Pro Turbo first-place finish to his list of accomplishments. Sims and team will look to keep the momentum going as the new race season kicks off.

All eyes will be on newly signed RZR Factory Racing members, including Scanlon Motorsports, Rhys Millen and Jake Carver. Each team is looking to leave its mark in 2017, with Millen setting the tone with a 2016 Baja 1000 overall victory. Polaris veteran Brandon Schueler of Jagged X looks for the team’s seventh BITD championship, and six-time King of the Hammers winner Mitch Guthrie and WORCS Champion Beau Baron will leverage their experience to continue landing on podiums in the coming year. Overall, 2017 will be the biggest and most exciting year ever for RZR Factory Racing, with an extraordinarily talented roster of individuals and teams representing Polaris across the country.

“Polaris is dedicated to off-road racing and continues to increase the company’s support of the sport,” said Daniel Carr, Polaris Race Team Manager. “We had an incredible 2016 and are excited to see what our expanded 2017 race team accomplishes.”

The 2017 team includes the following returning and new members: