Home All Stories Polaris Delivers Its Most Powerful & Advanced Side-By-Sides of All Time ... 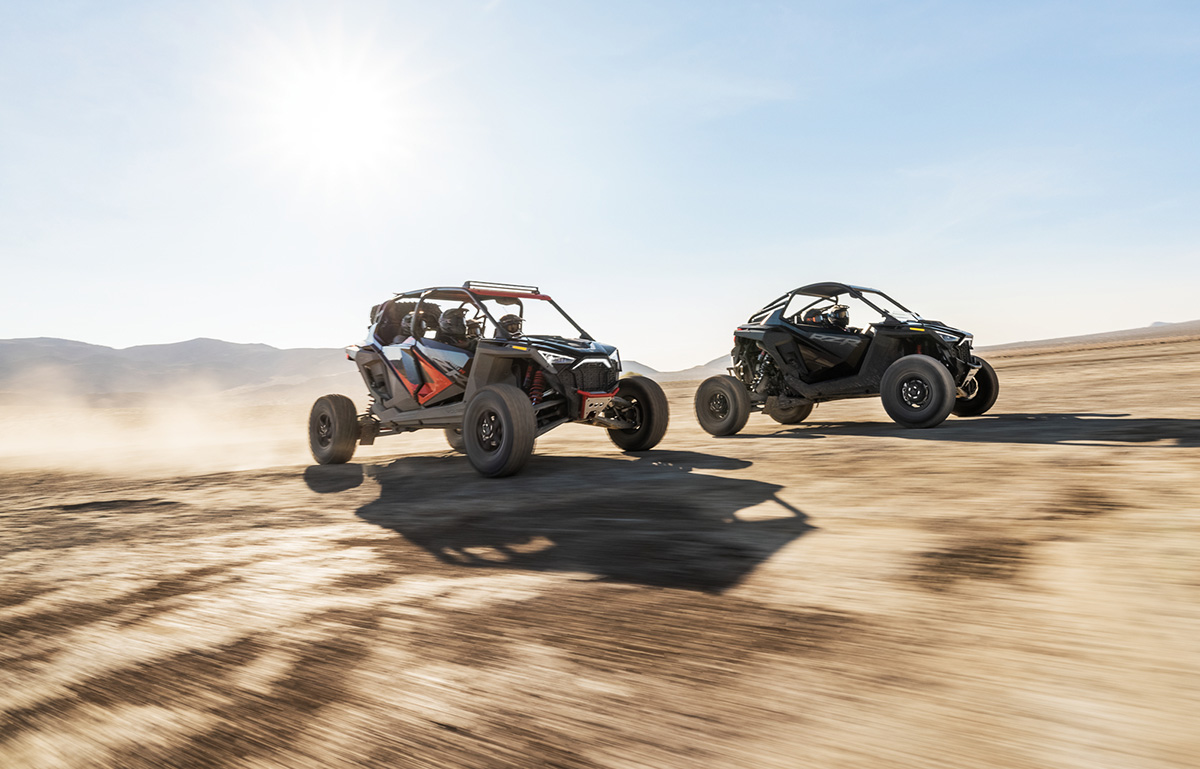 MINNEAPOLIS, MN (November 9, 2021) – Polaris Off-Road, the leader in off-road vehicle innovation, is once again making history for the off-road industry, redefining its wide open lineup with the all-new RZR Pro R and RZR Turbo R. The two new machines are the most powerful, strongest and advanced side-by-sides ever developed by Polaris.

The all-new RZR family offers a host of innovations that establish new standards for the wide open category, delivering a driving experience that pushes the limits of what the most demanding and passionate off-roaders expect.

These new models raise the bar for power, strength and control. RZR Pro R features the most powerful engine ever put into a stock side-by-side—a naturally aspirated 2.0L, four-cylinder motor that puts out 225 horsepower—making it far and away the new leader in off-road power. Meanwhile, a one-piece chassis coupled with a fully-welded roll cage, strengthened unitized hubs, and massive boxed steel A-arms provide a level of strength that’s rarely, if ever, available from a stock side-by-side. In addition, both RZR Pro R and RZR Turbo R elevate overall control thanks to the industry’s widest stance at 74 inches, and the most dynamic and sophisticated suspension ever designed by Polaris with all-new DYNAMIX DV, an intuitive system that utilizes input from the vehicle and terrain to continuously optimize rebound and compression damping. RZR Pro R and RZR Turbo R don’t merely lead the pack, they leave it in the dust.

In addition to enhanced power, strength and control, Polaris has engineered more than 70 accessories for the new models – many developed in partnership with some of the most trusted aftermarket brands in the industry – helping owners create a style and overall experience with their vehicle that’s truly their own. Using these accessories, Polaris expertly curated  three unique collections, which will resonate with key usage segments and feature a variety of different terrains: Desert, Dune and Rugged Trail.

Also a first in the off-road segment, is the introduction of Pro Armor five lug wheels, which adds style to your vehicle and can be paired with 32” or 33” tires. Along with these new wheels, Pro Armor will launch a full suite of aftermarket accessories that fit the vehicles, including cages, roofs, windshields and storage.

Designed completely from the ground up, RZR Pro R establishes an astounding precedent thanks to the most powerful engine ever put in a stock side-by-side. The naturally aspirated ProStar Fury 2.0L, four-cylinder engine pumps out a whopping 225 horsepower and, coupled with a larger clutch and belt, delivers power to the ground with instant response for fast acceleration. Three user selectable throttle control modes—Sport, Rock, Race—adjust throttle sensitivity and ensure the power is there when and how it’s needed. What’s more, the ProStar Fury harnesses its immense power thanks to a higher level of overall sophistication, delivering usable power throughout the powerband for optimal performance at any stage.

But all that power would be futile without the strength to properly manage it. Polaris achieves this through a next-level chassis and roll cage design, and dramatically upgraded suspension components. RZR Pro R features a stout one-piece chassis coupled with a fully welded one-piece roll cage, massive boxed steel A-arms, and enhanced driveline shafts and knuckles, allowing riders to push the limits. Dual Path Clutch Cooling breathes longer life into belts, and a new torque limiter helps protect the front drive from power surges. Unitized hubs bring added durability and simplify maintenance. Bottom line, the RZR Pro R is the most capable RZR to ever hit the market.

RZR Pro R complements its undeniable power and strength by offering definitive control for the rider. A commanding 74-inch stance provides maximum stability through rough terrain, while the MaxLink 29-inch suspension soaks up whoops effortlessly. Hold steady and minimize bump steer with the patented thru-arm rear toe link to help manage the massive travel so you can maintain control even through the wildest terrain. All-new DYNAMIX DV offers the industry’s first and only independent compression and rebound suspension system, allowing users to get the full range of motion out of the shocks. It also includes four new suspension & steering modes that monitor inputs from driver and machine 200 times per second, automatically adjusting compression and rebound damping independently to make the ride as smooth as possible and keep the wheels in contact with the ground. And while the chassis and suspension provide maximum control of the 225 horses, the innovative RIDE COMMAND system keeps everything from suspension mode monitoring and entertainment to GPS and route tracking, right at your fingertips.

“The unparalleled engine, chassis and suspension package on the RZR Pro R is arguably that of a Baja race title contender, straight from the factory. There’s nothing even close to it on the market today,” said Reid Wilson, Vice President of Polaris RZR. “To replicate its strength and dynamic suspension on any other factory machine would cost thousands of dollars in aftermarket parts and service.”

The enduring strength and capability of the suspension, paired with the power of 181 horses, delivers the stability to tackle challenging terrain, while the one-piece chassis and fortified roll cage maintain the integrity of the machine and peace of mind for the rider. In short, RZR Turbo R is unmatched among turbocharged side-by-sides, delivering uncompromising performance to die-hard off-roaders who demand the absolute best.

“Just like the RZR Pro R, there are no compromises with RZR Turbo R,” said Wilson. “It represents a dramatic evolution from its predecessor, RZR Turbo S, combining unparalleled performance and strength, with next-level technology and innovation.”