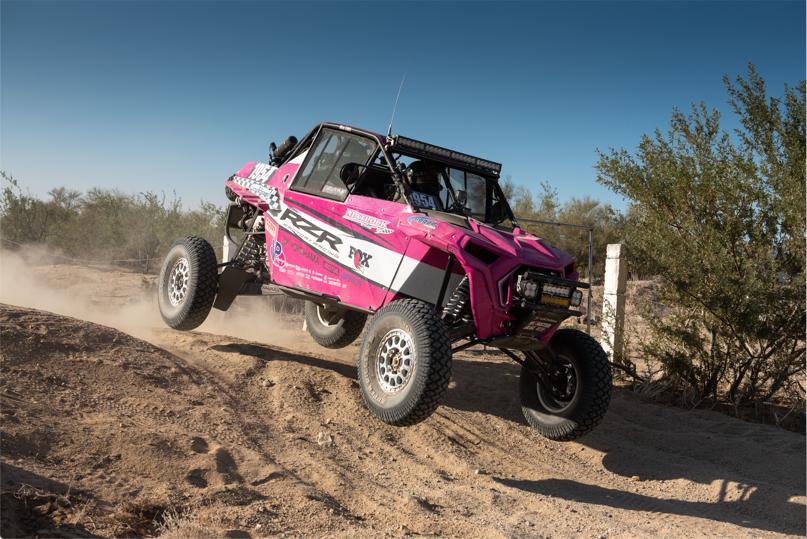 MINNEAPOLIS, MN (Sept. 28, 2020) –Polaris RZR Factory Racing celebrated their success at the 52nd annual SCORE BAJA 500, presented by 4 Wheel Parts, this past weekend in San Felipe, Mexico. The team faced tough competition with over 30 entries spanning across four UTV classes, but Kristen Matlock dominated the entire race, not only within the Pro N/A class, but also overtaking the Turbo class for the overall UTV win.

RZR Factory Racers held nothing back and raced with agility and speed at SCORE’s first race of the year. In an extremely rare and incredible accomplishment, Matlock took the overall win in her RZR XP 1000 after beating all of the Turbo class competitors, earning her second SCORE win in a row following her win at the BAJA 1000 this past November. Matlock commanded the race early on and never looked back. As she was first on the road in class, she began to move through the field of Turbo UTV entries and within 50 miles from the finish line, she was able to move into the lead and cross the finish line first physically and overall on time.

RZR Racer Mike Cafro, who won the Stock class at the 2019 BAJA 1000, took the Pro Stock class win this weekend. His team raced in both the Pro Stock and Pro Turbo classes and Cafro was able to secure the win in his brand new RZR Turbo S four-seater in the Pro Stock category. Following his previous win at the BAJA 1000, this also marks Cafro’s second win in a row in the SCORE series.

“It’s exciting to see what our team is capable of and how much talent comes from each driver spanning across multiple classes,” said Brett Carpenter, Team RZR Race Manager, Polaris. “It’s no doubt we’re on the right path to ending this year strong, from Kristen Matlock making an iconic statement in the Pro NA class to Mike Cafro continuing to have success in the Stock category. It’s great to build momentum as we approach the conclusion of the season.”

Polaris RZR Factory Racing will be back in action at the UTV World Championship race in Lake Havasu, AZ, October 7-10, 2020.