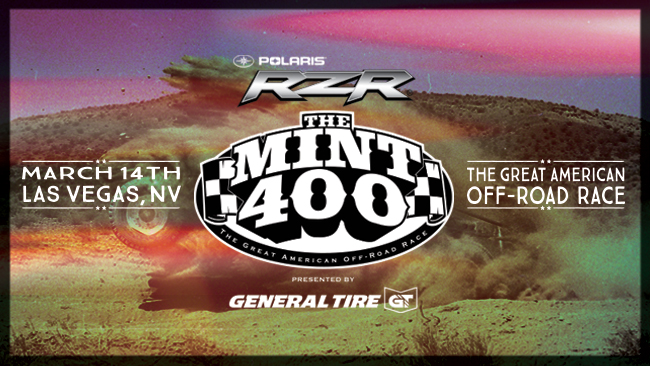 January 12th – 2014 San Diego, CA – The Mint 400 announced today that Polaris RZR has signed on as the title sponsor of the 2015 Mint 400, taking place March 11th -15th in Las Vegas, NV. Started in 1967, The Mint 400 is the premier off-road race in world, boasting the largest field of competitors, a massive crowd of spectators, and the most comprehensive national television coverage of any off-road race on the planet. Part of the Best In The Desert Championship, last years record-setting Mint 400 had 330 race teams, and set two new class entry records including fifty-two UTV’s and fifty-five unlimited Trick Truck vehicles.

“We are thrilled to have Polaris RZR as the title sponsor for the 2015 Mint 400!” stated Mint 400 CEO Matt Martelli. “Polaris has not only created the perfect platform to bring off-road enthusiasts onto the racecourse to compete – they have backed the entire off-road industry and share our vision of the future of off-road racing.” 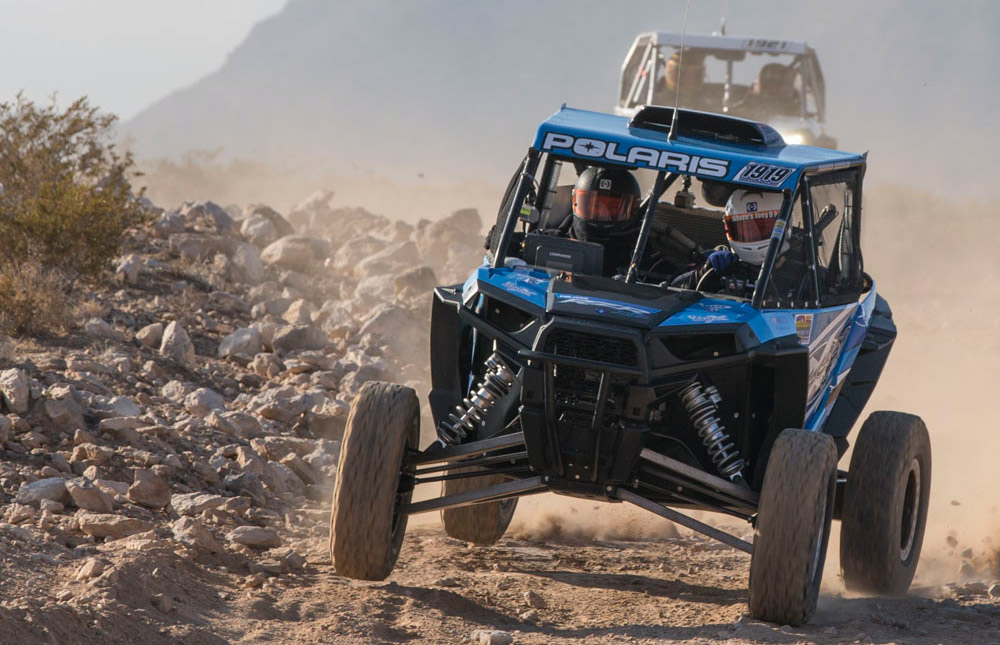 The 2015 Polaris RZR Mint 400 will return to the entertainment capital of the world, Las Vegas Nevada, from Wednesday, March 11th through Sunday March 15th. The Mint 400 will feature three days of pre-race festivities in the heart of downtown Las Vegas, followed by the most challenging and thrilling off-road race on the planet. Over one thousand of the world’s top off-road championship competitors will do battle in twenty different classes of vehicles across the brutal and unforgiving Mint 400 race course, in front of thousands of spectators and race fans. Crowds in excess of forty-thousand are expected to attend the festivities on Fremont Street East as well as The Mint 400 race – which are free to attend.

“The Mint 400 is an iconic motorsports event, and we’re proud to have Polaris RZR aligned with one of the biggest events in off-road. The history, position, and location of The Mint 400 make it an important showcase exploding desert UTV racing class. We are excited to partner with The Mint 400 and help shape the future of off-road racing,” stated Polaris Off-Road Vehicles Director of Marketing, Jason DiFuccia.

Polaris RZR will be displaying their full lineup of off-road vehicles and accessories including the industry flagship Polaris RZR XP1000 as well the new Polaris Ace. Polaris will also be hosting RZR Demo Rides so those attending can test-drive the most thrilling and exciting sport UTV on the market. 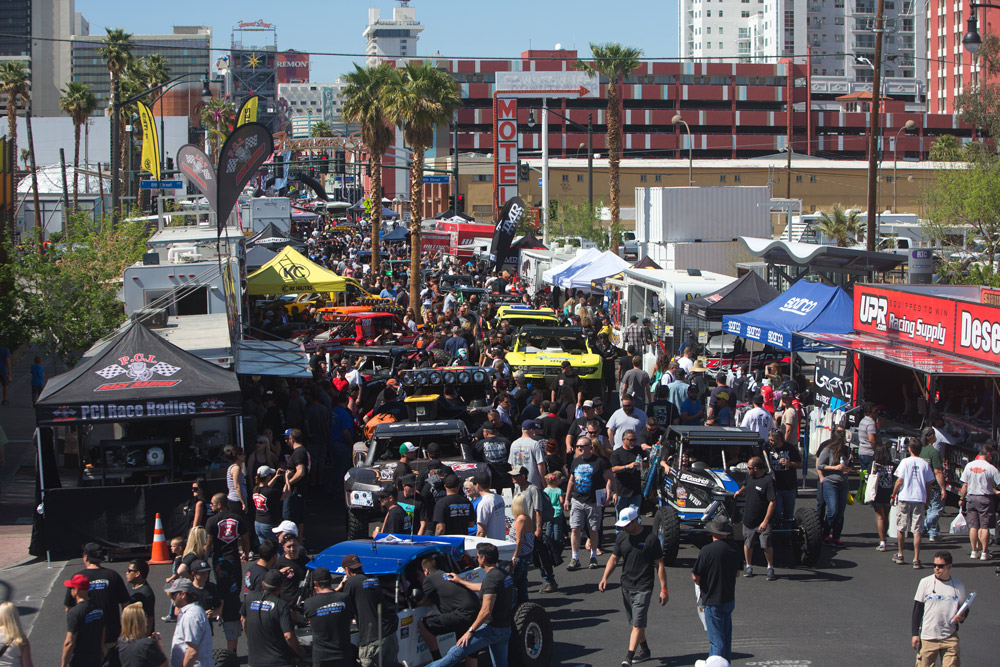 For more information go to:
http://themint400.com/

For racer registration go to:
http://www.bitd.com/

Do not wait! This event will sell out. 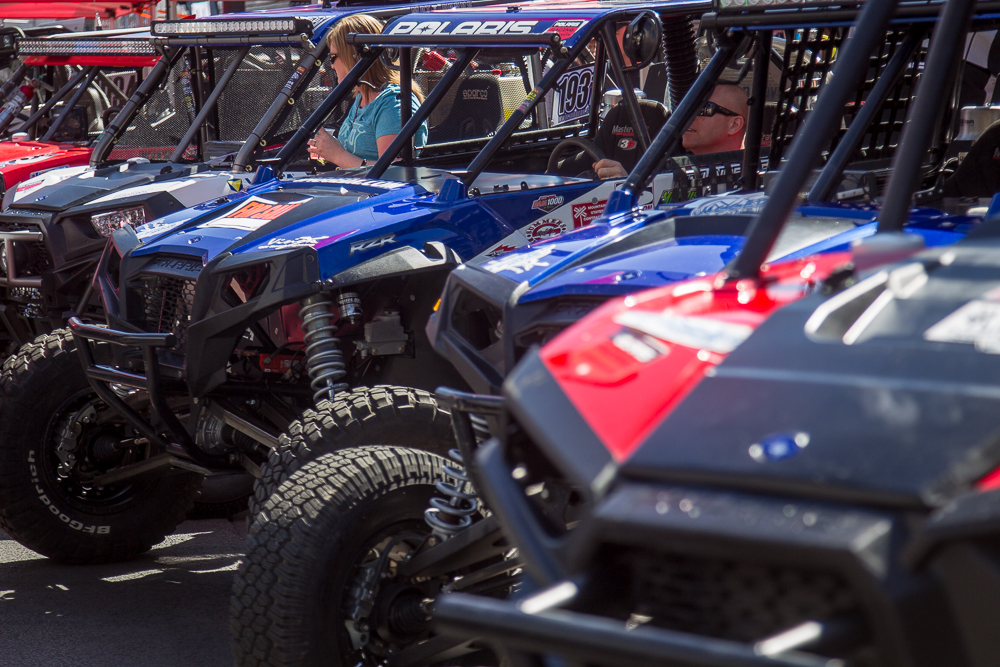 About The Mint 400
The Mint 400 is the oldest, roughest, most spectacular, and most prestigious off-road race in America. It was started in Las Vegas in 1967 and became the marquee off-road race that every racer and celebrity dreamt of winning. Known as “The Great American Off-Road Race™” the legend lives on, as each year the greatest off-road racers from around the world battle each other, and the brutal Nevada racecourse for a chance to be a part of American racing history. Less than half of those competing will ever finish the unforgiving race! The Mint 400 is an epic 400-mile battle between twenty different classes of off-road race vehicles. But it’s more than just a race. An entire week of events lead up to the famed off-road contest in and around Las Vegas, including a vehicle parade, drivers meet and greet, pit crew challenge, Miss Mint 400 beauty pageant, multiple parties, qualifying time trials, and a world famous vehicle contingency that is attended by tens of thousands each year.

About Polaris Industries
Polaris is a recognized leader in the powersports industry with annual 2013 sales of $3.8 billion. Polaris designs, engineers, manufacturers and markets innovative, high quality off-road vehicles, including all-terrain vehicles (ATVs) and the Polaris RANGER® and RZR® side-by-side vehicles, snowmobiles, motorcycles and on-road electric/hybrid powered vehicles. Polaris is among the global sales leaders for both snowmobile and off-road vehicles and has established a presence in the heavyweight cruiser and touring motorcycle market with the Victory and Indian Motorcycle brands. Additionally, Polaris continues to invest in the global on-road small electric/hybrid powered vehicle industry with Global Electric Motorcars (GEM), Goupil Industrie SA, Axiam Mega S.A.S., and internally developed vehicles. Polaris enhances the riding experience with a complete line of Polaris engineered Parts, Accessories and Apparel, Klim branded apparel and ORV accessories under the Kolpin and Cycle Country brands. Polaris Industries Inc. trades on the New York Stock Exchange under the symbol “PII”, and the Company is included in the S&P Mid-Cap 400 stock price index. Information about the complete line of Polaris products, apparel and vehicle accessories are available from authorized Polaris dealers or anytime at www.polaris.com.