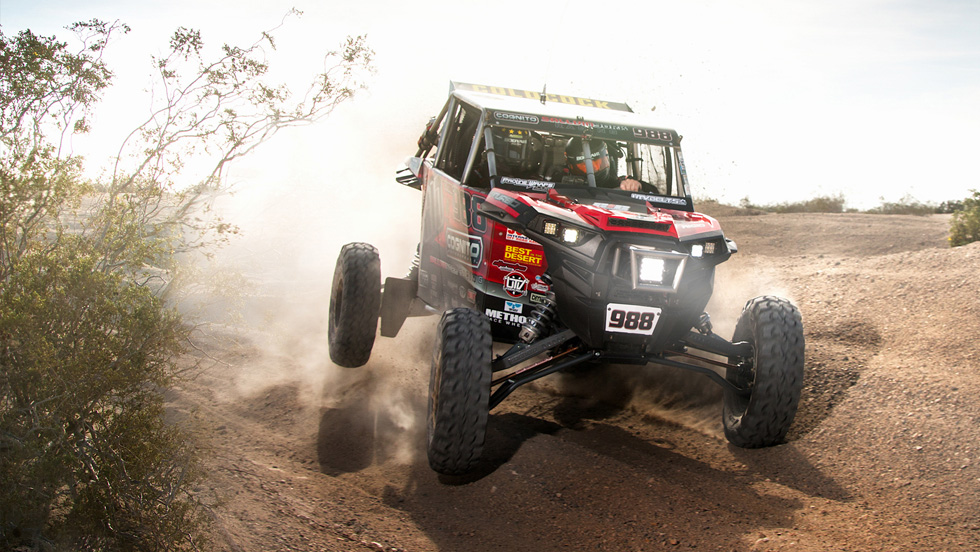 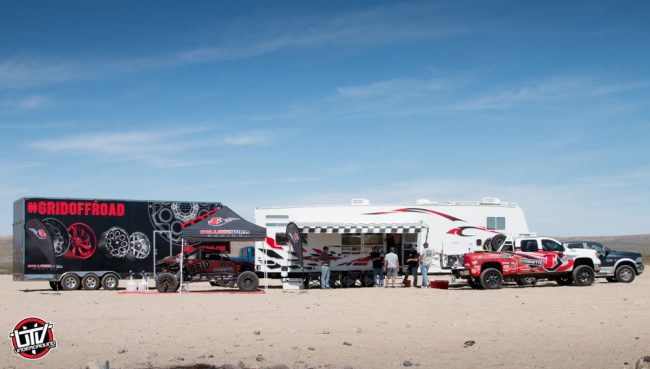 Race Life: Sallvin York Racing Prep & Race UTVWC
The Sallvin-York Racing team hit the scene hard in 2016 entering the BITD racing series. Sallvin York Racing consists of Tomas Sallvin and Travis York who teamed up with their passion of racing. Travis York acts as Co-Driver, and his cousin James York, who also shares driving and co-driving duties in the SYR Polaris RZR #988, grew up in the off-road racing community. Prior to their RZR, the York’s raced a class 10 buggy in the SCORE and BITD series. Tomas Sallvin always had a love for racing since a young age building soap box cars which ultimately grew into racing multiple forms of motorsports from road course racing to off-shore boat racing.  In 2015, Tomas wanted to get into UTV racing and picked up a 2016 Polaris RZR XP Turbo, invited both families to come out and announced the newest venture for Sallvin York Racing. They joined the BITD series half way into the 2016 race season to learn the ropes and get familiar with this new form of competition. The Team has had its learning curves with racing a new class, but never let the trials and tribulations steer their determination or competitiveness.

The Polaris RZR UTV World Championship powered by Monster Energy (UTVWC) is a pinnacle for many UTV racers in the community, with it drawing in over 350+ entries which include the best-of-the-best in UTV race competition. This was going to be their 5th UTV race as a team and they were anxious to win, but knew a lot of testing needed to be done in order to compete at the highest level. They had finished a respectable 4th place in the first race of the 2017 season at the Parker 250, but after a challenging race at The Mint 400 in March, were fixated on a strong showing at the UTVWC.  UTVUnderground.com traveled to Barstow, CA with the Sallvin-York Racing team to watch the team as they prepared and got in some final testing. 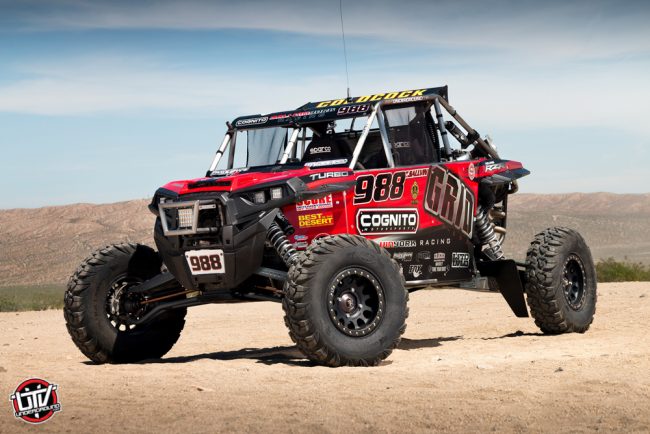 TEST DAY
The desert of Barstow, CA and its whoops are known to be a great testing ground for shocking tuning and that is exactly what the team was there to do. Precise suspension tuning for the quick course they would be facing at the UTV World Championship is significant when pushing their FOX shocks to the limit through the proving grounds. Suspension is what makes an off-road vehicle special and the Sallvin-York Polaris RZR has over 20″ of usable wheel travel at all four corners of the vehicle. Tuning is a meticulous and time consuming process. It consists of running the car hard enough and long enough to get the shocks warm to see exactly how they will be working under race conditions. From there, the team makes adjustments which consist in many cases of removing the shocks, pulling them apart and re-valving them internally before putting them back on the vehicle and repeating the process. Spring rate adjustments and internal valve adjustments, along with multiple measurements to perfect ride height are all a part of the process. 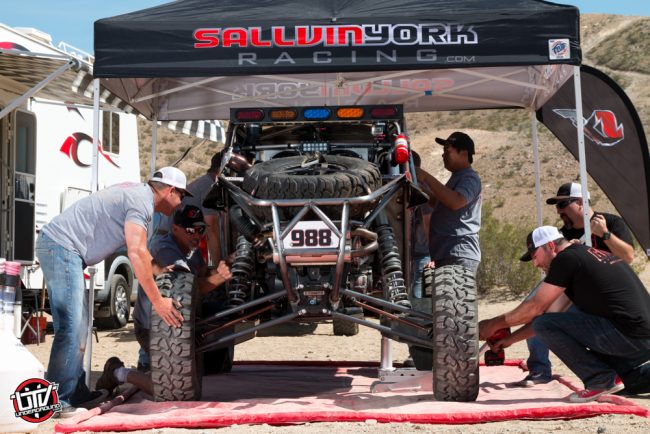 After the first shake down run Tomas pulled back into the teams makeshift pit on “Barstow Main”. He was concerned with the suspension being too stiff and not soaking up the aggressive whoops. The team looked over the RZR for any possible issues and adjusted the springs and bypass settings and then headed back out for another pass. Shock tuning is also a great time to get a feel of the machine beyond just its handling. Its here that you can expose any other weak areas of the machine prior to competition. It also gives driver & co-driver time to acclimate to one another again and work on their communication within the race car.

With Tomas & James out on their second run, minutes passed away with no sign of Tomas and James. Eventually we could hear the low pitch of the vehicles exhaust coming back our way. With the machine not moving at or anywhere near a race pace, worry set in for a second thinking they may have suffered a mechanical. They pulled back into the pit and Tomas expressed excitement over how well the RZR felt after the small adjustments the team had made. He had simply cruised back in knowing the car was exactly the way they wanted it. No further testing was needed and so it was time to get the machine cleaned up and re-prepped for competition.

Overall the testing went well, but you never know what can happen when racing. Many teams spend countless hours in the desert between race events testing, practicing and experimenting with set-ups. Testing can provide a lot of false hope as well as often you leave a test session feeling like you have the perfect machine only to get to the race and have a small part fail. Racing is, check that, winning is never a guarantee! Tomas and James were eager for a shot at the podium at the biggest UTV race in the world, the UTV World Championship! In two weeks the team would be in Laughlin, NV where the river setting gives you a sense of vacation but the harsh, fast and brutal desert terrain can quickly remind you that off-road racing is not for the weak. 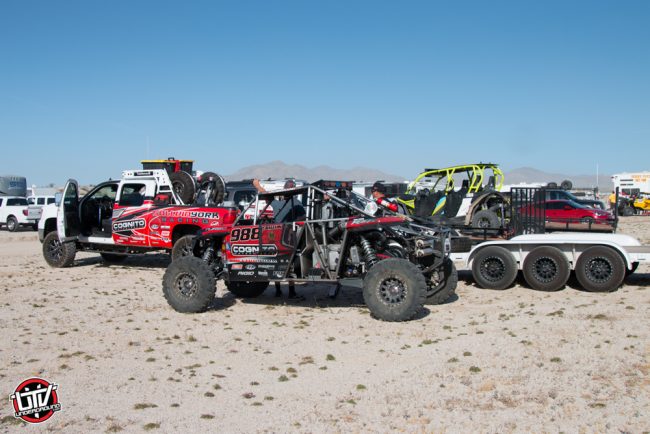 RACE DAY
The pits at the UTVWC were packed with hundreds of teams, which forced Sallvin-York to find a spot in the back giving them a less than ideal position for pitting if problems were to occur. Tomas had never raced a “land-rush” style start but was eager for the experience. The #988 RZR would be lined up between 15 other race vehicles in the 5th row, giving them some time to see how racers were managing the first turn which is infamous for roll overs and crashes. With the group ahead of them leaving the line, Sallvin-York prepared for the exciting, yet dreadful start. With the wave of a green flag, Tomas executed a quick start and managed to get a good position heading into turn one. They seemed to find themselves in a close pack of racers, bumping tires and white knuckle driving through the dust for the first 5 miles. 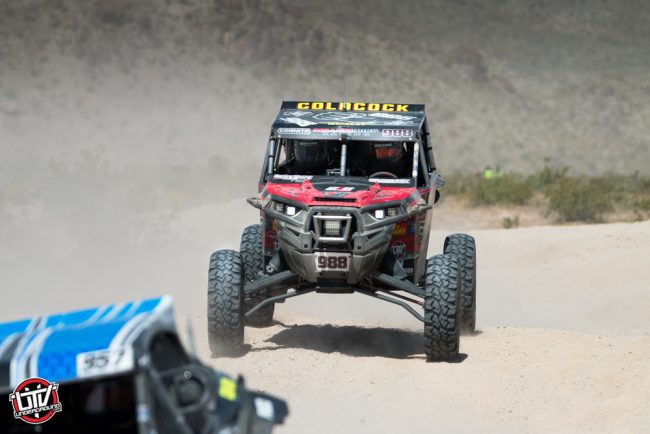 The SuperATV proving grounds went smooth due to their Cognito long-travel suspension and tuned FOX shocks. The Proving Grounds are a long section of deep and brutal whoops unlike any they would see all year. Around race mile 8 they would suffer an axle failure, a common weak point for any off-road machine due to the harsh terrain, hard driving, big tires and horsepower. Tomas drove conservatively to the pits for repair, but the pits were bottlenecked with racers causing a traffic jam. The team had time to make up and did the best they could with managing a timely axle swap. Heading back out onto course and doing what he can to make up time, Tomas was able to get back to the middle of the pack.

With the next lap down, everything seemed to be going as well is it could. However, you know this is racing and just when the team began to find their groove they lost yet another axle. They had now gone through two new style axles, and not knowing why the failures persisted Tomas asked the team to swap to their older style axles to see if maybe it was the parts in the new axles that had issues.

The RZR, now repaired, was back in action and all was working as intended. The team was thrilled with how strong their RZR was running, especially with their clutch which had given them fits over the course of the season. AirDam had helped them work on their clutch set up the day before the race and it really paid off. The Cryo-Heat treated transmission ran cool allowing Tomas and James to keep a steady pace and finish a strong 18th in class and 33rd overall. Although it was not the outcome they were looking for, Tomas and James successfully finished the rigorous race and celebrated with a well deserved adult beverage. 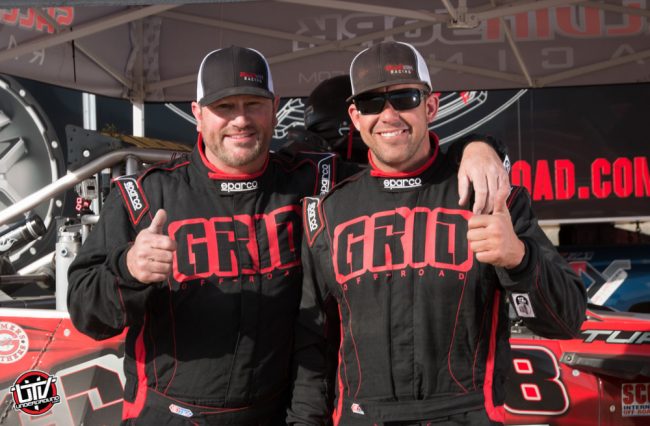 Sallvin York Racing is learning more about their RZR each race and it looks like they may have worked out the last bug in the UTV. The BITD Vegas-To-Reno is next up and is going to be challenging as it’s the longest race of the 2017 season.

On behalf of all of us at UTVUnderground.com we want to extend a huge thank you to everyone at Sallvin-York Racing for having us along on this journey, we can’t wait to see the team battle it out the rest of the season, we know you will succeed!