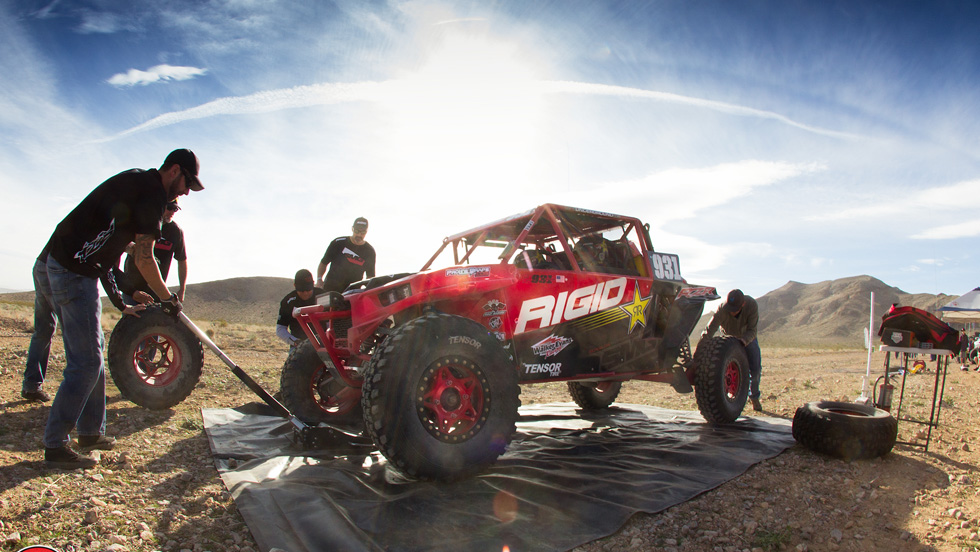 The Mint, is the most iconic off-road race in the United States, its also one of the most challenging. You just don’t show up to the Mint 400, you plan, you prepare and you must commit to the finest of details to even remotely have a chance at winning such a grueling race. The Scanlon Motorsports Group (SMG) was birthed at the Mint 400 back in 2016 and while the team at the time really only consisted of just Scanlon and co-driver Keith Redstrom racing in a rented vehicle, a much larger plan was in place. A year later, SMG arrives in Las Vegas, NV appearing to be one of the most professional and established teams in all of off-road racing. The biggest and baddest programs in off-road racing are all in town for this event, you would think by the looks of the SMG ensemble of support vehicles that they were their to race a Trophy Truck. Instead, they were about to unleash one of the most advanced Polaris RZR’s ever built. 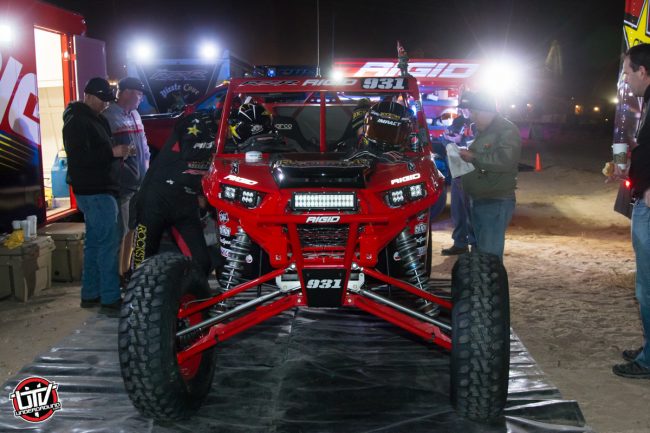 Early Saturday morning, after days of testing & preparation, with the moon looming over main pit, Craig Scanlon and his Scanlon Motorsports Group were finishing the last touches on their Polaris RZR (aptly named “Ludicrous”) before embarking on The 2017 Polaris RZR Mint 400.  The organized chaos within the SMG pit was being over seen by Alan Kleinemas who delegates the pit crew on their tasks throughout the race. The SMG plan was to put a crew at each of the pits spread around the course. SMG has a fleet of meticulously built and prepped support vehicles that include a Ford Raptor, F450 and Mercedes box van. All including the race RZR were purpose built specifically for off-road racing and to Scanlon’s specific designs. The pit was buzzing with angst, the constant thumping of engines warming hummed through the air. It was race day and you could feel it. 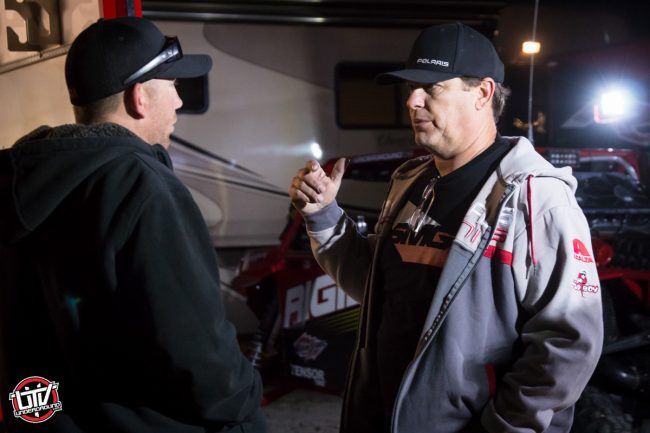 It was apparent that everyone knew their specified task for the race and working in cohesion would be needed for fast pits. Keith Redstrom, the co-driver, uploads the GPS file into the navigation unit of the race car with any last minute way point changes, it was almost time to head to the starting line. “Wyatt the Gnome” is the unofficial mascot for SMG and makes an appearance at every race, there is always time for a little comedic relief, something to help ease the tension and anxiety. Craig and Keith strapped in and headed off to pre grid to stage, not far behind were the pit crews heading out to their specified locations. Radio chatter would take the place of music in the support vehicles, everyone was focused, the expectations were to win. 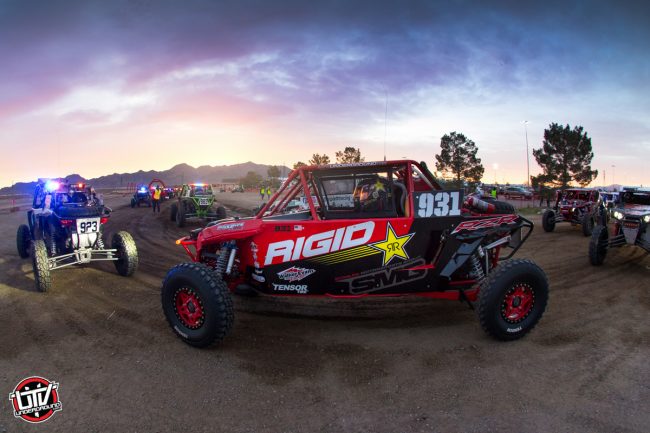 The sunrise colored the sky with vibrant shades of purple and orange which would end up being the last sense of tranquility for the day. Craig and Keith both were excited and anxious while in line ready to start the race. Teams staged two-by-two and would be sent off the line side-by-side every thirty-seconds, the #931 was positioned deep in the field due to a poor starting draw, they had some work to do and Scanlon knew it. With the drop of the green flag Craig sunk his foot deep into the throttle, the turbo engine roared. Ludicrous blasted off the start line sending it hard on the first jump. It was apparent as they gained the hole shot that Scanlon was determined to gain ground, the race was on.

In a race like the Mint, nothing is promised and it always sucks when an unforeseen mechanical rears its ugly head. Not too far into the race they ran into set backs which consisted of a flat tire due to contact. Somewhere between race mile10 and 11 a fuse on the cooling fans popped. Luckily, they had a spare to replace it but the issue would soon reappear around race mile 30 setting them back 45 minutes. Every second in a desert race is precious, down time like this is almost always a day ender. Its always amazing that a $.05 part could hinder a $100K + race machine, but it happens. Unfortunately for Scanlon, it happened to him. 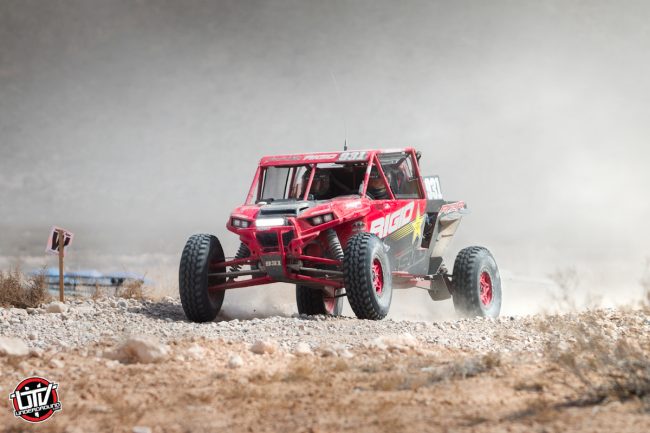 The pit crew was informed via radio by Keith that they were 5 Miles out from Pit B and were to be prepared to perform a tire change and supply the car with spare fuses in case the electrical problem reoccurred. The team was prepared with spare tires, fuel, and fuses. Craig’s pit member signaled him into the pit and he came in hot on the gas. He was anxious to get in and out and the crew shared in his urgency. 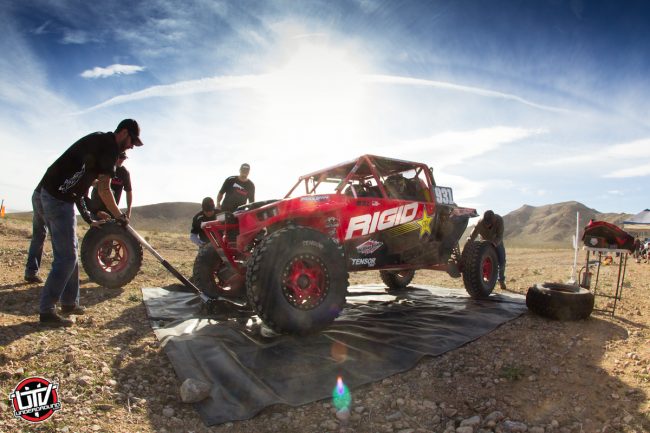 With precision and agility the team pulled off a quick pit and Craig blasted off to make up lost time. Without hearing any chatter of problems or issues we knew Craig put the hammer down and was determined to reach the front of the pack once again. It wasn’t going to be an easy task with over 100 of the fastest UTV drivers on the planet on course with Scanlon.

Fellow Polaris RZR / Rockstar Energy athlete RJ Anderson, was on hand at Main Pit as another driver for SMG. The plan for RJ was to get into the car for the third and final lap giving Scanlon some relief and putting a fresh set of eyes and a heavy foot into the #931 for the final miles of the race. RJ Anderson’s father Randy Anderson of Walker Evans Racing was present to assist the team with main pit duties and would oversee the shock settings on the vehicle when Craig pulled into pit. Jason Merrell of the UTV Wolfpack was also on hand to assist with fueling after he had a roll over accident on the lake bed which led him to bow out of the race early, the benevolence I witnessed was inspiring. 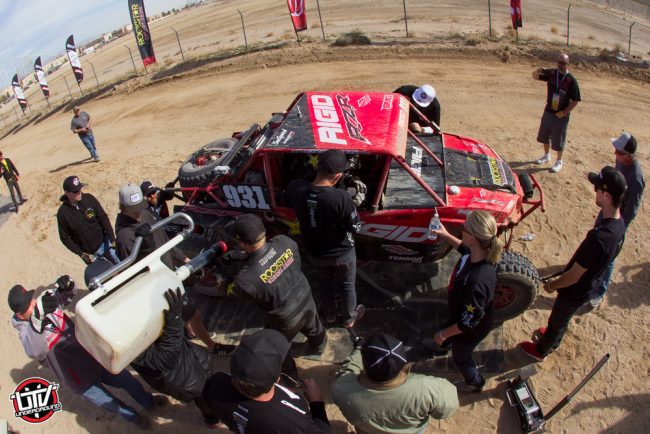 After some quick changes and fuel, Craig set out on lap two not knowing that it would end up becoming the last lap of his race. The time deficit would be too much for him to overcome but he and the team would fight every mile knowing that anything can happen in a desert race. RJ Anderson would never suit up. 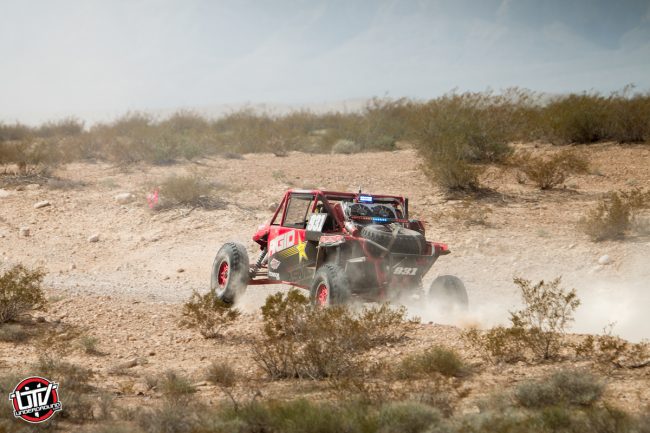 As Scanlon charged hard into the unforgiving Nevada desert, I made my way back to the finish line to catch them coming in on lap two. I was informed that Mitch Guthrie Jr., the current class leader, had just started his third and final lap of the grand prix formatted race causing Best In The Desert, the sanctioning body, to stop all others racers not already on their third lap. 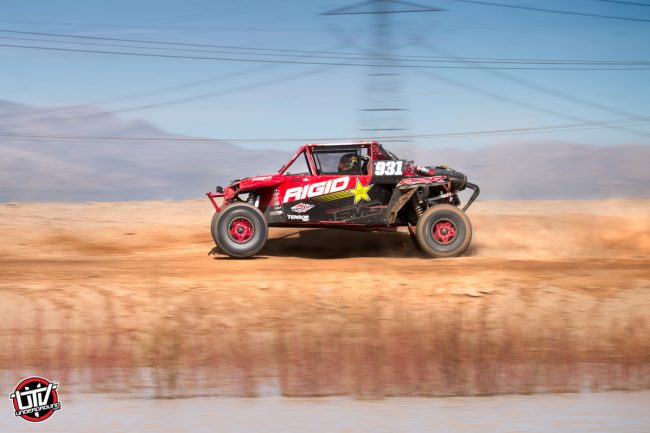 Scanlon came in shortly and was devastated by the news. Although happy for fellow Polaris team mate Mitch Guthrie Jr. who went on to win the race in dominant fashion, you could hear the disappointment in Scanlon’s voice. Craig and the entire SMG team are not just there to have a good time, they want to win. The team had prepared for the Mint the minute they crossed the finish line in the previous race two months prior. I have been around few teams that showcase such a desire to not only be the best, but represent themselves and their sponsors in such a prideful and committed way. The entire fleet of SMG vehicles look as if they belong in the clean confines of a pavement track and not the filthy and dusty deserts of off-road racing. The race vehicle is as much a piece of art as it is a vehicle built to pound through some of the most brutal terrain on the planet. Spend some time with SMG, and you realize very quick that behind all that shine is a hard nosed, blue collar group of individuals who are built to win. 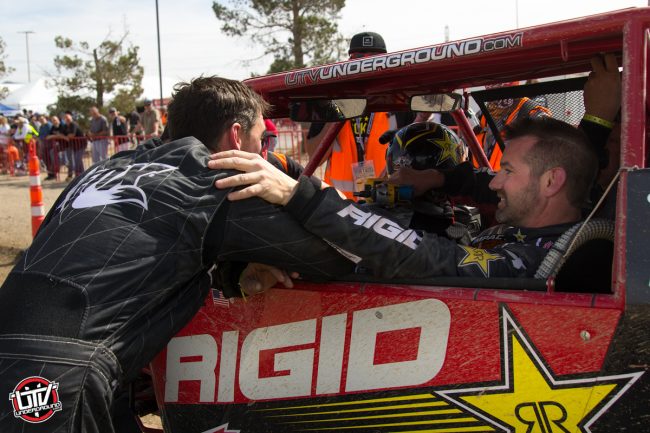 The Mint 400 won today, but SMG refuses to quit. The adversity Scanlon faced ignited yet another fire and before the race car was loaded up to make its way home, the team was quickly making plans to win the UTV World Championship. The best never rest.