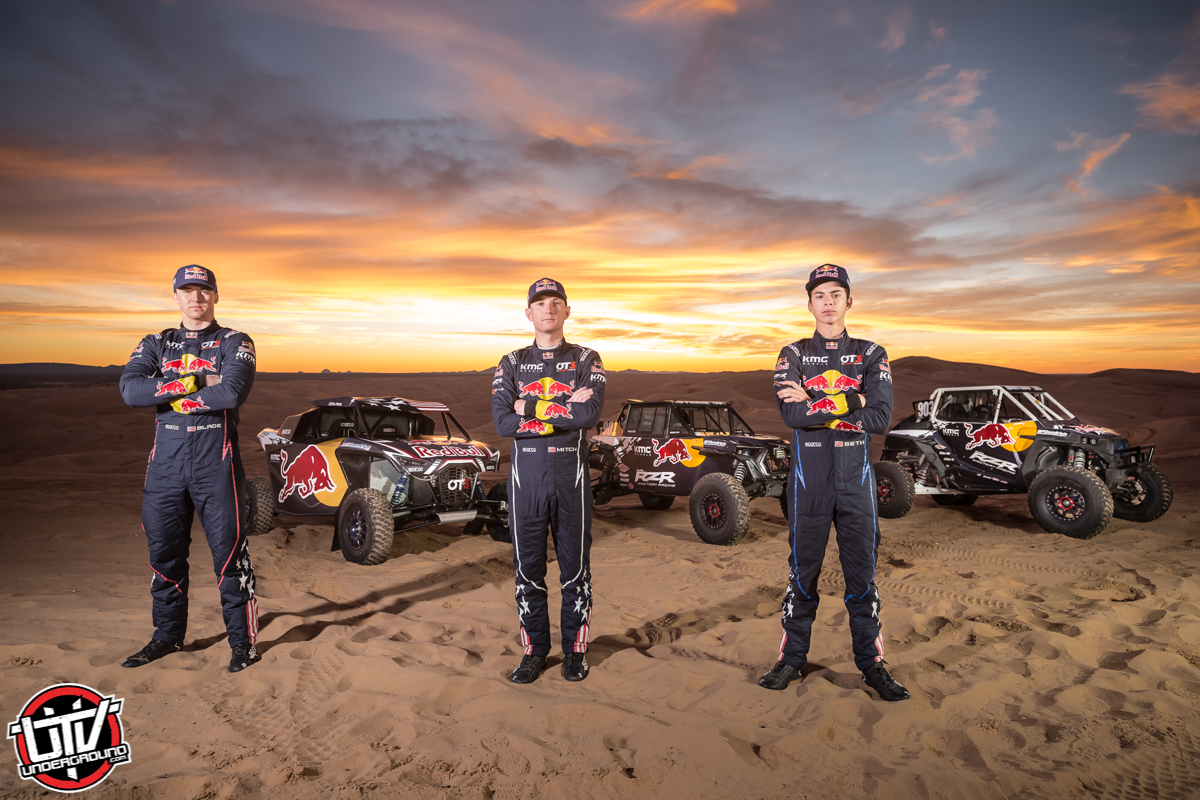 The three stars of the future representing the Red Bull Off-Road Junior Program in 2020 are Blade Hildebrand, Mitch Guthrie Jr. and Seth Quintero. This trio of young, raw-talented and hungry drivers will compete at a worldwide calendar of famous off-road races in the coming year under the stars and stripes banner of Red Bull Off-Road Team USA.

The Red Bull Off-Road Team USA off-roaders will travel the globe in 2020 to compete in iconic races. In their native North America they plan to race the Mint 400, Baja 500, Vegas to Reno and more. You’ll also see the young drivers at international cross-country events such as the Silk Way Rally, Morocco Rally, Abu Dhabi Desert Challenge and the most extreme off-road race on the planet, the Dakar Rally.

The goal of the Red Bull Off-Road Junior Program is to scout, develop and grow the next generation of off-road champions. As well as being part of a professional team set-up, members of the program will also benefit from a mentor scheme that has proven so successful with the Red Bull Junior Team in open wheel racing.

The first appointment for Red Bull Off-Road Team USA will be the toughest rally of them all, the Dakar Rally. Blade Hildebrand and Mitch Guthrie Jr. will both be in Saudi Arabia racing the purpose built OT3 by Overdrive. The OT3 is the first prototype side-by-side (SxS) machine ever constructed specifically for rally-raid and cross-country. During testing its fearsome 1000cc rear-mounted turbo engine produced an impressive 177 horsepower and 290Nm of torque in its FIA version.

Even though Blade Hildebrand has just turned 21 years old, he’s already a Dakar champion. The off-roader from California’s Yucca Valley won the OP.1 class at the 2019 Dakar and is ready to jump in his brand-new OT3 side-by-side (SxS) machine for another shot at glory. The OP.1 race at Dakar covers a vehicle category based on the US off-road race SCORE Series that includes the Baja 1000.

Blade Hildebrand will also race the OT3 package at races in the United States next year. He’ll be aiming to add to his two wins at the Laughlin Desert Classic and take full advantage of the opportunities being part of Red Bull Off-Road Team USA will give him.

“Having the right backing – the right group of people who want to see you succeed – is a big part of it. I think the main goal of everyone on the team is to step up. I don’t want to sound cocky, but I want to go out there and win. That’s the ultimate goal.” – Blade Hildebrand

“I think that in 2020 and beyond this program is going to really raise a lot of awareness for people in the United States, letting them know what international racing is all about. And it’s also going to build a lot of hype here for Dakar.” – Mitch Guthrie Jr.

Mitch Guthrie Jr. will also race the OT3 by Overdrive at the Dakar and other international cross-country rallies, but will represent Red Bull Off-Road Team USA in a Polaris RZR Turbo SxS when competing in North America. The turbocharged Polaris RZR has proven successful across a range of North American desert races, thanks in no small part to its 168 horsepower and cooling system designed to give reliable performance in harsh conditions.
The third member of Red Bull Off-Road Team USA is 17-year-old Seth Quintero, a bona fide phenom on the off-road racing scene. The resident of San Marcos, California won the youth UTV World Championship at age 11.

Fast-forward to today and he’s added two Pro UTV titles to his résumé. The teenager has also been crowned a World Off-Road Championship Series (WORCS) winner twice. He’s recently made history by becoming the youngest ever driver to win the UTV Pro class in five Best In The Desert races. And he’s just getting started…

“Red Bull Off-Road Team USA is a team that is going to allow for young kids like me to really progress in the sport. Having the opportunity to work with the best equipment and having the best people around me is definitely going to help me in my career in 2020 and beyond. For me to be chosen for this team at 17 years old is a real honor.” – Seth Quintero

Just like Mitch Guthrie Jr., Seth Quintero will race a Polaris RZR Turbo at races in the USA (but in the Pro Production N/A class) and get behind of the wheel of an OT3 for international cross-country rallies once he turns 18 years old.

As well as competing at top races worldwide as part of a professional team, the three members of the first-ever Red Bull Off-Road Junior Program have the chance to learn from some of the best in the business. Three-time Dakar car class winner Nasser Al-Attiyah has given his input into the OT3 machine that the team will drive at the Dakar and five-time Dakar bike race winner Cyril Despres is in place to mentor the trio throughout the season.

“We’ve already got to hang out with Cyril Despres. He was a legend standing in front of us, but he made us feel really comfortable. We were able to talk with him about any issues that we had.” – Seth Quintero

It’s going to be an action-packed year for Red Bull Off-Road Team USA as they criss-cross the globe to compete in illustrious races. You can follow their progress by watching Destination Dirt on Red Bull TV.

Destination Dirt will follow these young drivers throughout the season as they are thrown into a brand-new level of competition. Traveling across the globe to far-flung and exotic destinations such as Russia, Morocco, China and Saudi Arabia, the three must learn to stand on their own amidst unfamiliar cultures and grueling competition.

Although many were interested in joining the team, the selection of the three drivers was made through an internal process run by Red Bull and its industry experts. The drivers were picked based on a combination of past performance and future potential.