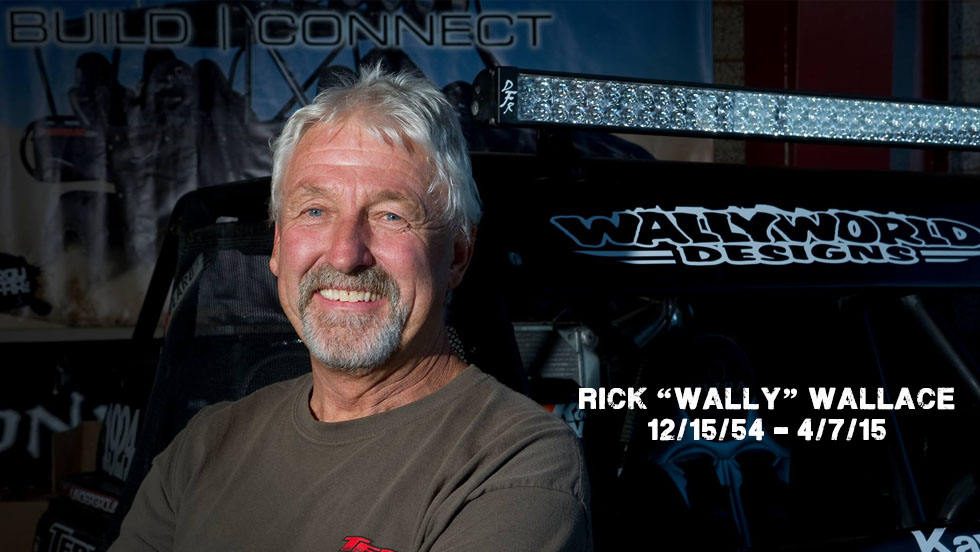 Yesterday, Monday April 7th, 2015,  the world lost a great man. Our good friend and colleague Rick “Wally” Wallace passed away peacefully in his sleep. Rick Wallace, simply known to all of us as Wally, had a long 3 to 4 year battle with cancer.  I have never had to write a story in this tone before. Its a story I would never want to write, but its one that this man deserves.

I first met Wally somewhere around 2008. I can’t pinpoint exactly when and thats probably because after meeting him I had felt like I had known him my whole life. Wally had that affect on people. He would greet you with a smile that I now wish I could see one more time. He was a talented individual. I met Wally as he was transitioning into his love for UTVs. Wally was a painter by trade but had an eye for vehicle design and was as creative a person I had ever met. He could visualize things in a way that few could and the vehicles he would create were some of the coolest I had ever seen. He was amazing. Over the years Wally and I would get to race together, ride together on many adventures and would become close friends and riding buddies.

His painting talents span decades. From his early years painting VW’s in Huntington Beach all the way to some of the most famous off-road race vehicles our sport has ever seen in his shop in Hesperia. Wally World Designs created iconic themes for some of the biggest names in our sport like Vessels, Pflueger, Vildosola, Pierce, and many, many more. He was sought after to not just paint vehicles, but simply just to paint helmets or other unique items. To have a “Wally World” paint job on something was a pretty darn special thing.

I was one of those lucky individuals who got to own a Wally World paint scheme. Wally sponsored the absolute coolest paint job I have ever had on anything I have ever owned. Ironically it was on a Yamaha Rhino, but the work belonged on that of a show quality hot rod. I remember vividly coming to Wally’s home in Oak Hill, CA, right at the top of the Cajon Pass. It was the first time I had been there. I had my newly built Rhino on the trailer and I was so excited to have Wally do the paint on this build. When I told him I wanted a hot rod themed, flat black paint scheme he was all over it. He had a thing for flat paint at the time and loved that I wanted this old school theme on my off-road toy. He insisted on doing the job and what he turned out was one of the coolest paint schemes I have ever seen. I left the job in his hands as I believe you should always do when having an expert do a job.  He took my idea and turned it into something I will never forget. He named the machine the FATROD and put this cool Big Daddy Roth font logo on the hood, all hand painted of course. He knew I had 2 little boys and a girl for kids and so he did a cool hand painted graphic on each side of the vehicle that was 3 Kings, 2 Queens, fanned out like a poker hand and below it said FULL HOUSE. It was genius and special. It represented my family and the build, he had a way of making everything personal and he always paid attention to the details. That Rhino is what helped me launch UTVUnderground.com and to this day I still get people bringing up that build. The paint made it.

That first trip to Wally & Kim’s (Kim is Wally’s wife) house affected me in more than one way. Of course it resulted in getting the coolest paint job ever but it also blew me away with Wally’s set up he had shop wise. He and Kim have the coolest house. It reminds me of the old west the way they have an old wooden wind mill in the front yard and rustic fencing. Of course there is a big rancho style entrance with a giant Welcome to Wally World sign at the top but what really made me drop my jaw was Wally’s shop set up. He ruined me!!! I was like, man, this is how you live right here. He had a massive shop where he did his painting next to his big covered RV parking. Down below he had another massive shop where he parked all his UTVs and toys. I mean, how could I leave there not being envious and a bit jealous. The man took care of his stuff and gave me a ton of inspiration for how I one day wanted to live in my own home. Its fair to say, when Wally did something he went all in and always did it the right way. He never cut corners.

Those early meetings would blossom into a fantastic friendship. Wally and I shared many adventures together the last 5 or so years. He led me and many others on some of the most amazing trips and off-road rides that I have and probably ever will go on. From the Grand Canyon to riding cross country from Las Vegas to his home in Oak Hill, to traversing the dunes of Glamis and playing on trails from here to Montana. I got to experience Wally when he was in his element and truly at his happiest. Never have I met someone so dead set on exploration and adventure. He launched a company called Wally World Adventures and he would take groups of people on rides to and through some of the most amazing off-road trails this continent has to offer. He not only wanted to explore it for himself, he wanted to share the experience with as many people as he could. I was just fortunate to be one of those people.

I could tell stories about our trips together for days, and I will tell those stories to friends and family for the rest of my life. Wally gave me more than friendship, he gave me experiences and memories. He taught me how to be a better person, not by telling me but by showing me. Even at his weakest during his fight with cancer he would still find a way to muster up a smile, shrug off the illness and always talk about getting well so he could do more. His last few years here on earth were lived out doing what Wally wanted and could do. He never lost his spirit for fun and adventure. He gave up painting a few years ago, but shifted that passion into customizing his UTVs for comfort, speed and adventure riding. He always had something new to show me and always had a new idea he was working on. He never quit.

Our last ride together was special. Last year we partnered with Polaris to join the Warfighter Made organization for a week of camping and riding in Mammoth Lakes. When I called Wally about joining us he was the first one to arrive at the camp site. It would be the last week of riding that we would do together and it couldn’t have been a more epic trip. We spent time riding and just hanging out. We talked our normal talk, industry, friends, family and of course adventures. He shared with me how much he was loving his Lake Havasu home and boat and told me I always had a place to stay if I wanted to visit. I sure wish I would have taken him up and made that happen now. He left that trip a little early as he wasn’t feeling very well. That seemed to be the theme on a few trips these last couple of years. I would see him push himself to make the trips because he didn’t ever want to be left out or miss out on the rides. Eventually the strain would catch up to him and he would have to retire early from a trip and I know that always frustrated him. He was very paranoid early on when he was diagnosed. He didn’t want anyone to know at first because he was afraid that people or companies would be afraid to invite him on trips. The thought alone was ludicrous in my eyes. It only made me want to do more with him, never not knowing how much time we had left with him. This is the only positive I can find out of the whole cancer deal is that it made the time I got to be with Wally that much more special because I never knew if it was going to be the last time. We actually got a lot of trips in over these last few years and for that I am grateful.

I am not sure how or why Wally got cancer. Maybe from all the paint fumes, maybe he was just unlucky? Doesn’t really matter I guess. I hate that the disease seems to always attack good people. We will never understand God’s plans but its through these trials and tribulations that you usually get to see the real person within. In this case, it reaffirmed that Wally was the same Wally before and after. He never changed, in fact, he only got more motivated and only wanted to do more. He fought that damn disease tooth and nail, never giving up. Wally didn’t lose the battle, the disease may have taken his body but it didn’t ever touch his spirit or his soul. He won by showing me and many others how to face those unforeseen obstacles life throws at you. He lived like he rode, fast and fearless, always seeking the next adventure.

Earlier on I mentioned how I was so envious of Wally’s shop. During the time that I have known Wally, the home I lived in didn’t have a garage. He would always ask me, where the heck are you keeping all those UTVs you have? Well Wally, that house I told you about at The Mint 400 that I was buying, I got it. And guess what? It has a shop for all my UTVs! Want to know what the first project is in this new shop buddy? Its writing this story for you. I can’t help but tear up sitting here and typing this. I really wish you could come see this place, its pretty dang cool. Not quite Wally World cool, but I will work on it.

I love and miss you dearly already. If I didn’t tell you the last time we saw each other, thanks for coming to see us all at The Mint. I know you weren’t feeling well, and something tells me you knew your health was fading away, but in true Wally World style you made that one last adventure. I promise to never forget you and I promise that in all that I do, I will always Ride For Wally.

See you in Heaven someday, until then, paint us some epic sky’s….