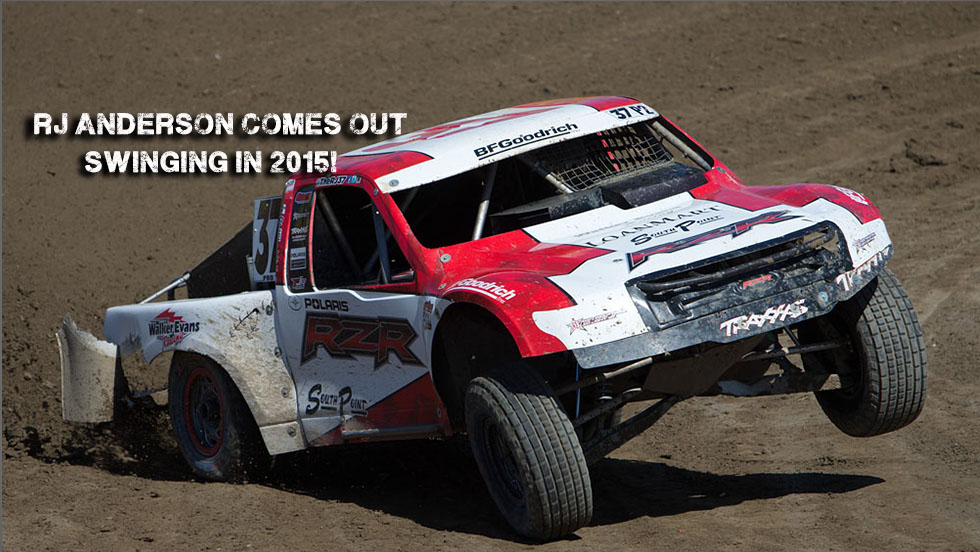 Riverside, CA 3/23/15 – Excitement peaks going into the first race weekend of the year but the 2015 season began months ago for the RJ37 Team. Never has Anderson worked so hard to prepare for a season. Countless hours of testing and prep went into the #37 Pro2 & Pro-Lite trucks in support of this year’s championship quest. 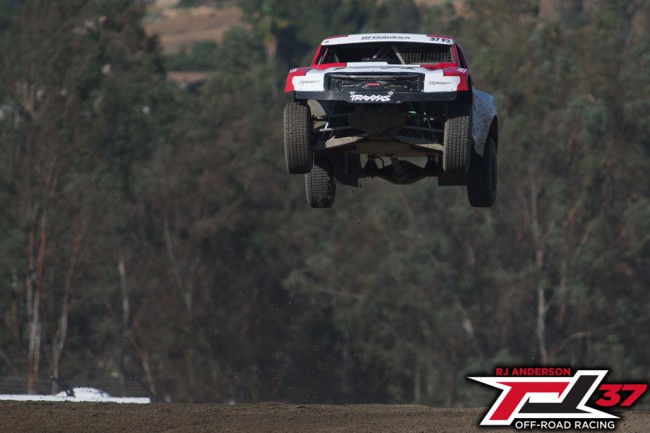 The 2015 Lucas Oil Off Road Racing Series (LOORRS) kicked off this past weekend in Lake Elsinore, CA. Here, in front of RJ’s home crowd, a new look would be unveiled to the public. A fresh new red & white graphics scheme inspired by last years look and RJ’s Polaris RZR viral video series XP1K, would adorn this years #37 Pro2 & Pro-Lite trucks. With this fresh look came a new level of confidence both in the team and himself. 2014 was challenging as the 22 year old RJ Anderson, then 21, ran his 2 truck program for the first the time all on his own. Combine that with it being his rookie season in the elite Pro2 class and you have enough pressure to break even the most experienced racers. RJ battled all year long proving himself as a team owner and learning as much as he could as a driver in a new division. 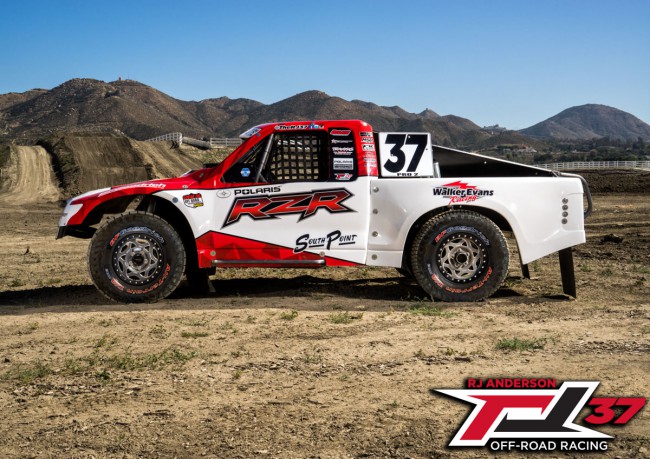 This year the RJ and the RJ37 team are all about results and in Round 1 & 2 this weekend RJ proved that he is back and will be a force in both divisions all year long. RJ would earn 2 podiums in the Pro-Lite division putting his #37 LoanMart, Walker Evans Racing, South Point Pro-Lite on the box in 3^rd place both for Round 1 & 2. The Pro-Lite got a much needed face lift by Holz Racing Products after last seasons beatings. The truck was pretty worn out until Mark Holz and his guys got ahold of the #37 and gave it new life! The former Pro-Lite champion came out and showed that he and his team are coming to reclaim their championship title. 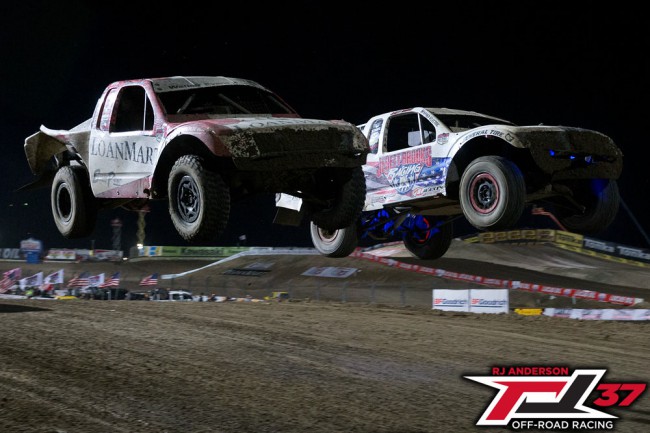 Friday’s run in Pro2 would present some challenges, however RJ and the team never gave up. Qualifying would end as RJ would be collected by a spun out truck in front of him over a blind jump. The collision would result in a destroyed drivers side front-end that the team would have to completely rebuild before the evenings race. The poor qualifying run would result in a 14^th place start and when the green flag dropped RJ immediately opened the eyes to many in the crowd and in the sport that this years RJ Anderson was a new and improved version. RJ sprinted to the front of the field battling for 2^nd place before contact would send him out of podium contention and to the back of the pack. He would quickly make work of 5 trucks before finishing the night in a disappointing 13^th position. However, RJ was the fastest truck on the track until race winner Bryce Menzies would narrowly surpass his lap time late in the race. With the second fastest lap in Pro2, RJ had high spirits as he and the team prepped for Saturday’s Round 2 event. 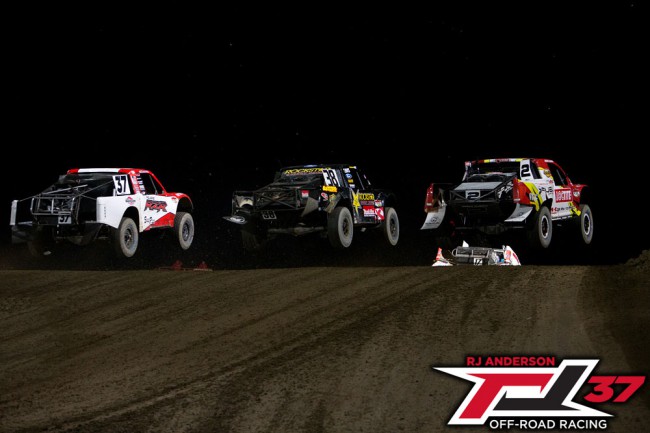 On Saturday RJ would qualify 7^th putting him in the middle of the herd as the green flag waived and racers fired off into Round 2. It didn’t take long for RJ to impose his will on the competition. He once again showed he was one of the faster trucks on the track and made quick work of as many trucks as he could. As RJ reached the top 3, he Jeremy McGrath and Patrick Clark would go 3 wide down the front strait away and as they flew into the air contact between RJ and Patrick Clark was made sending the #37 Polaris RZR Pro2 sideways and into a violent 360 spin as it landed. RJ remained on the throttle and after being tagged by a couple of trucks found himself back on course and still running. The yellow flag waived putting RJ into 4^th where he would remain despite a last minute push to overtake McGrath for the 3^rd position. RJ rolled back to the RJ37 pits where he was greeted by his team and fans who all were riding high both on the weekends performance but more so on the promise of success in the 2015 season. 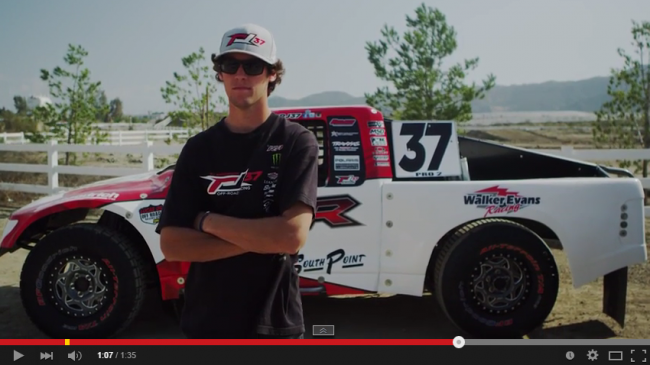 Rj teamed up with UTVUnderground.com to put together this short video showing off the new livery and talking about the build up to the 2015 season and things to come. Click the Image above to check it out!

RJ would like to thank the entire RJ37 team, his family, fans and sponsors!! Come see RJ compete next month April 14th & 15th in Chandler, AZ at the Wild Horse Pass Motorsports Park for Rounds 3 & 4. See more at www.LucasOilOffRoad.com (http://www.lucasoiloffroad.com/)

About UTVUnderground.com The worlds fastest growing all inclusive UTV site contributed to by both enthusiasts and manufacturers alike. UTVUnderground is the go-to site for fresh, original content and is known for its dedication to hosting all of the latest news and insight surrounding the UTV industry. Thousands of monthly visitors from over 100 different countries around the world go to UTVUnderground.com for their daily dose of UTV news and information.

About Mad Media Mad Media (www.madmedia.com) is a San Diego based marketing and creative agency, with in-house film and television production. We craft authentic, culturally engaging brand messages, and deliver them across print, web, photography, and film platforms. Mad Media has been leading the online content revolution since 1995 producing major commercial, television, online content and viral film projects such as The Gymkhana Series and XP1K Series.