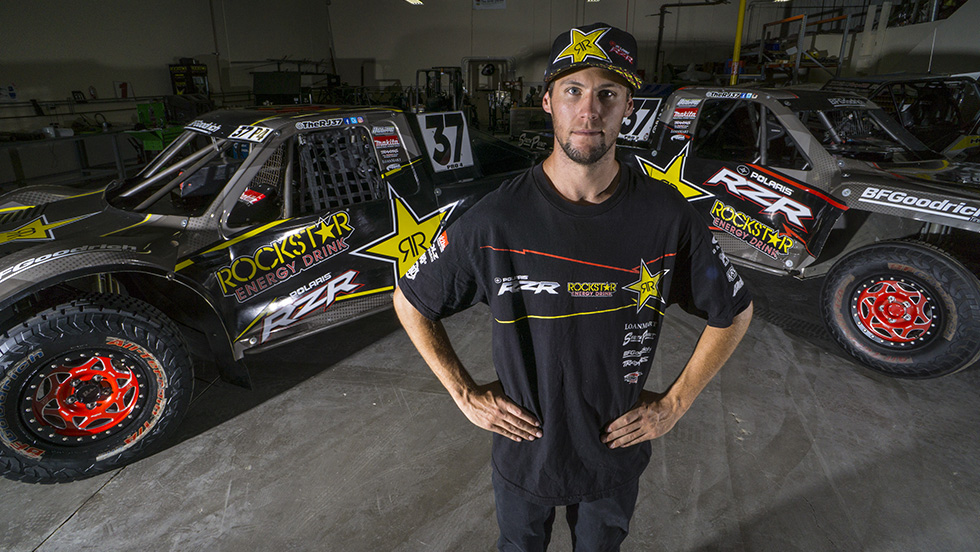 RJ Anderson Doubles Down on 2016
Anderson Unveils NEW Pro4, Sweeps WORCS, and Charges Towards a Championship at LOORRS
Riverside, CA 9/22/16 – It has been a wild year for RJ Anderson. Never one to sit still, competition has kept him busy and the results are piling up! Anderson will roll into Lake Elsinore, CA this weekend for Rounds 13 & 14 of the 2016 Lucas Oil Off-Road Racing Series with both momentum and a shot at capturing the Pro2 Championship points lead in the #37 Polaris RZR / Rockstar Energy Pro2. After a strong finish in rounds 11 & 12 in Reno, which saw Anderson on the podium in both races, he took over second position in the championship points standings. He has positioned himself well for the late season charge towards his first Pro2 off-road racing championship in only his 3rd year in the class.

“We came into this season with a no excuses attitude. The team and I knew what it would take to get the truck up front and we have worked hard this year to make that happen. To be sitting second in points at this part of the season is proof to both my sponsors and my team that we are on the right track. With a little luck, I think we can give the class a run and win a championship.” stated RJ37 driver and team owner, RJ Anderson. 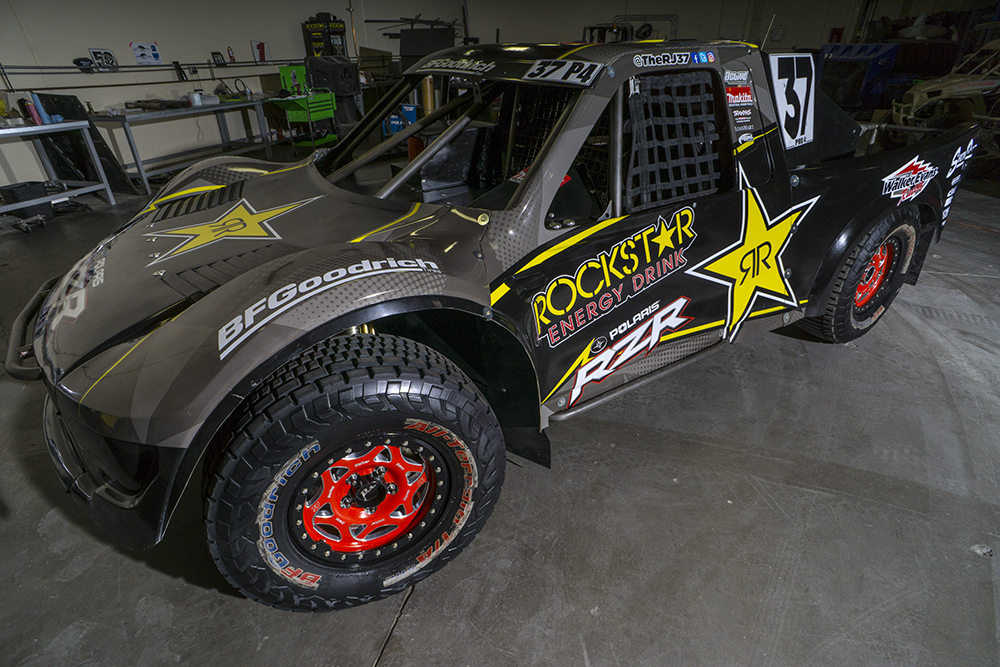 In addition to chasing down a championship in Pro2, the RJ37 team is planning to bring their brand new #37 Rockstar Energy / Polaris RZR Pro4 to the party! It is undecided if RJ will actually run the truck in competition this weekend, but the plan is to get it out there for practice and see how the new 4WD, Kroyer Powered beast runs.

“I knew long ago that I wanted to race Pro4 but I also knew that I had to continue to remain true to the sport and pay my dues and work my way into the class. After winning the Pro-Lite Championship last season we decided to focus solely on the Pro2 program for 2016 in preparation for adding a second truck if the opportunity arose. With help from Rockstar Energy and of course Polaris RZR, we found a truck we liked. The team and I have spent the past few months setting the new Pro4 up and learning the truck before ever considering to even put it on the track in competition. But I feel like we are ready to see where we stand in the class and to see where the truck is at. You only can learn so much testing, you really need to be at race pace to see what you and the truck are made of. ” stated RJ37 driver and team owner, RJ Anderson.

In addition to racing trucks, RJ has remained busy behind the wheel of his Polaris RZRs. Recently, RJ appeared in multiple high-profile commercial shoots with Polaris RZR to help launch their all-new 2017 Polaris RZR XP Turbo. RJ worked alongside his Polaris RZR teammates including brother Ronnie Anderson to shoot the special “Team RZR” launch videos. RJ also unveiled his brand new 2017 XP1K4 Polaris RZR this past weekend at the Sand Sports Super Show. The fourth video in the epic viral video series is slated to be released this winter and rumor has it, this could be the biggest one yet!

His RZR appearances haven’t been limited to just being on camera. RJ was back on the track last weekend at the WORCS racing series at Glen Helen and found himself sweeping the weekend behind the wheel of his Holz Racing Products built Polaris RZR XP1000. RJ took down the best of the best in both the Pro 1000 and Pro Unlimited classes adding a few more podiums to his already long list of accomplishments.

“Its important for me to get out and still compete as often as possible in my RZR. You know, Polaris has done so much for me, my family and this sport and while its very easy to be caught up in running the RJ37 team and racing trucks at the end of the day my RZR keeps me grounded. I get out there with my friends and family and just go hard behind these amazing machines and not only does it keep me fresh and in a racing mindset in between truck rounds, it also provides me with a ton of fun. To get back in my RZR and head to WORCS and come away with a couple of wins might not sound like a lot to some, but if you see the level of competition at WORCS competing in RZRs you would understand why I am stoked on that. These guys, and girls, are super fast now and their RZRs are crazy good! Now with the new 2017 RZR having 168hp right out of the box, I can only imagine how gnarly racing is going to get in these things now! I can’t wait to build my new RZR.” stated RJ37 driver and team owner, RJ Anderson.

The RJ37 team is excited to get back out on the track at Lake Elsinore in front of the local crowd. The team is equally excited to watch RJ37 Pro-Lite driver Ronnie Anderson in the #52 Walker Evans Racing Pro-Lite continue his run towards a Rookie Of The Year award. The younger Anderson has showed promising signs all year long and while older brother is entering into his prime, younger brother is just starting to find his groove.

“To see Ronnie improve and mature behind the wheel of the #52 makes me just as happy as seeing myself do good. Ronnie is a huge part of the RJ37 program, we look to him to continue to carry the torch in the Pro-Lite class and one day plan to see him fielding another Pro2 and maybe a Pro4 for us and himself here at Lucas Oil. Ronnie knows its a process and I am just glad I can be along for the ride with him and see him come into his own style and find his own success. Don’t let that smile fool you, he is hungry and he wants to win and everyone who has paid attention this year has seen him charge. Ronnie’s coming to the front and I really hope he scores Rookie Of The Year because him and his crew deserve it!” stated RJ37 driver and team owner, RJ Anderson. 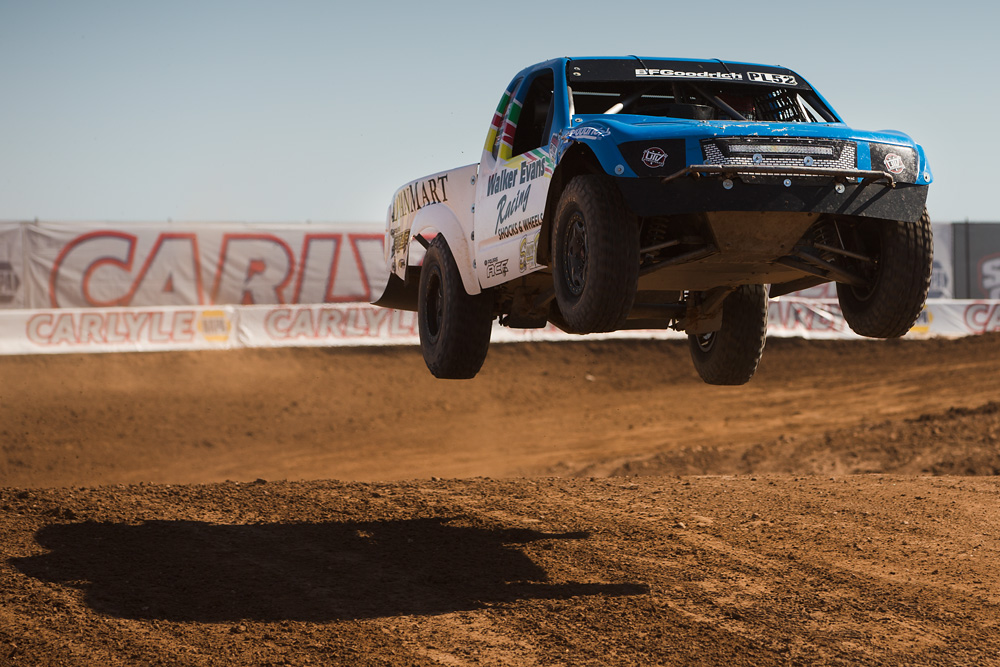 About UTVUnderground.com
The worlds fastest growing all inclusive UTV site contributed to by both enthusiasts and manufacturers alike. UTVUnderground is the go-to site for fresh, original content and is known for its dedication to hosting all of the latest news and insight surrounding the UTV industry. Thousands of monthly visitors from over 100 different countries around the world go to UTVUnderground.com for their daily dose of UTV news and information.