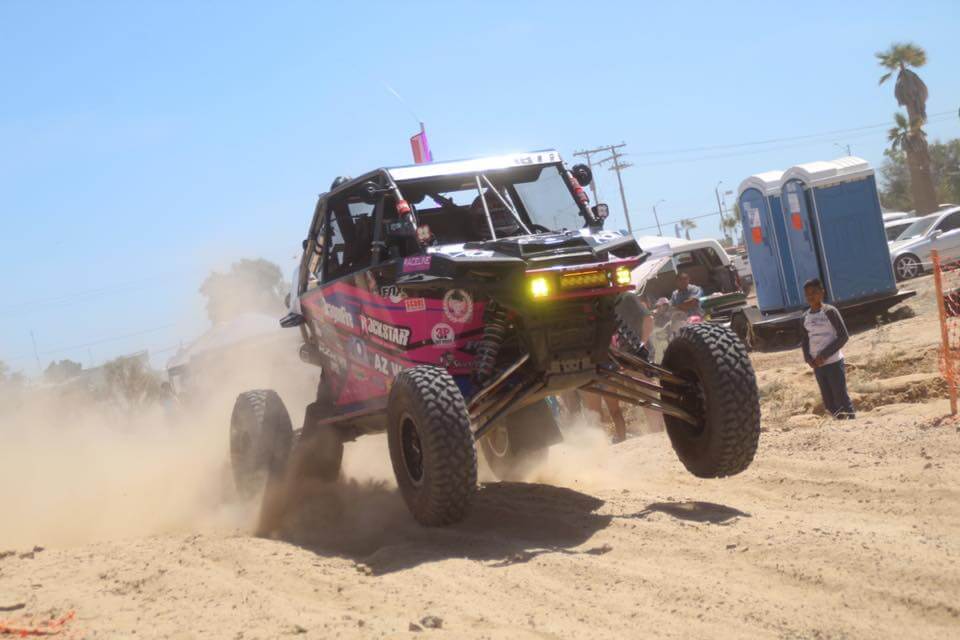 Our friends at 3P Off Road asked us to build an unlimited Polaris RZR for the SCORE series for 2019. While in the process, it wasn’t going to be finished in time to race the season opener, San Felipe 250. We decided to skip the UTV World Championship and use our car to keep our friends in the championship hunt and we knew we could put BlackBetty on the podium. So, we packed up on Thursday and headed south to race one of the roughest races on the planet! 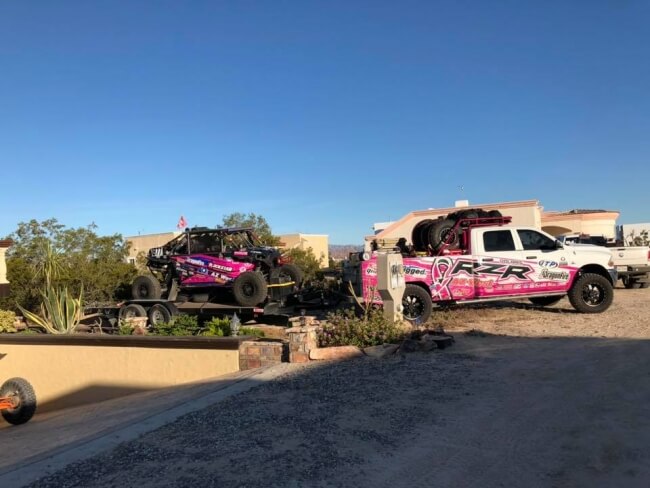 We arrived in San Felipe Thursday evening to a beautiful casita on the beach thanks to our Friend and fellow racer Cesar Quirarte. We would tech the car on Friday so we all decided to head into town for dinner and a few beers to celebrate a new season of winning! We met our class 11 friend Jeremy and had a fantastic dinner and lots of beers! It was then decided that we should take Trevor to the local strip club. He was pretty hesitant, but Eric talked him inside. Once inside, he refused to look at any of the girls but we had fun with him anyway!

Friday came and we all got up early and headed into tech. It was a beautiful day in San Felipe! We had a great time with our fans and fellow racers and of course tacos! The car passed through tech without issue and we headed back to the casita to put the finishing touches on the car. Afterwards we headed down to the beach for some fresh pina coladas out of pineapples and play on the beach. It was a very relaxing end to an awesome day!

Race day came and staging for us didn’t begin until about 9am so we took our time getting ready for the big day. As usual, we decided to make some last minute clutch changes and ended up being late to the start line by about 30 minutes. Not a big deal, the race was timed. They started us in the middle of the 11 cars and just as we were about to get in line, they pulled us back out saying our brake lights weren’t working. We messed around with that for about 10 minutes and they finally let us go!

We headed out of town and out into the roughest desert, I have ever raced! The San Felipe side is always my side of all the Baja races to race, so I knew what was in store for us. The plan was to have me drive with Zach as co driver until one of us wanted to get out. No one else really wanted to drive or co drive the torture of San Felipe! Zach and I knew our competition was a ways in front of us so began to do our best to make up time. The notorious San Felipe whoops did not disappoint. 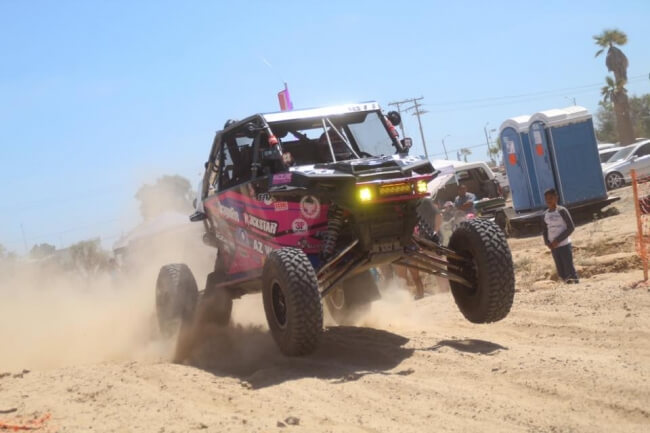 We had also heard about the Matomi wash and knew we may have a bottle neck coming up soon. We could tell we were close as there were more and more rocks on the track and the canyon walls began to grow. As we entered the wash, there were cars and trucks everywhere and a ton of spectators. Zach got out to analyze the situation. It didn’t look too bad and there were some Jeep guys there helping everyone through. We got in behind the 4400 Jeep and followed his line. Never thought I would be rock crawling my race car! Since I have a ton of experience in the rocks and because we were driving a Polaris RZR, the rock crawling portion was a piece of cake. We headed out of the wash and right back into the biggest whoops ever! We saw one of the other unlimited cars off the track and put some time down on him, hoping he wouldn’t catch back up. We made it to our first pit for fuel at RM 170 and the boys told us there one only 1 other unlimited car in front of us, but because we started so far behind them, we may already be ahead on time. That wasn’t good enough for me, I wanted to pass him! We caught him just as we headed up the goat trail and watched him fall away in the rear view mirror! Half way through the race and we were in first place! No time to celebrate, we had a lot of race left to run. If there wasn’t whoops, it was the deepest silt/sand I have ever seen!

The race was brutal, even with our well tuned suspension. There were many times, I was thinking that I could just get out and have someone else drive, but I told myself, that could I do this! I made it to 330, the last time we would see the chase truck until the finish line, so I got out and had Josh, the driver of record get in to cross to the finish line. He drove her slow and steady as to not make any mistakes this close to the finish. Nothing feels better than to see them come across the line and in 1st place! It was such an accomplishment! We just took on the roughest race on the planet and not only finished, we won! I couldn’t be more proud of my team! Finally got BlackBetty on the podium and mine and Josh’s first win in SCORE. 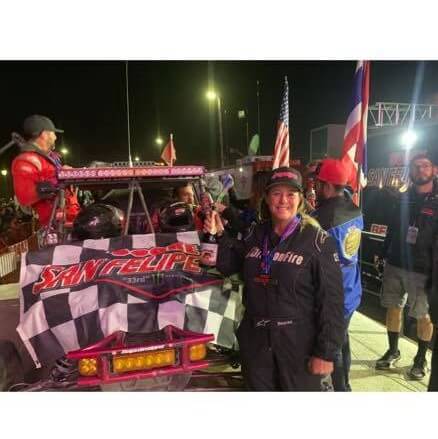 Thank you to all our family, friends and sponsors that make all of this happen! Special thanks to Sydney Spielman for spending her Saturday tracking us online and keeping the team updated. You were a very important part of the team! See you all in June!