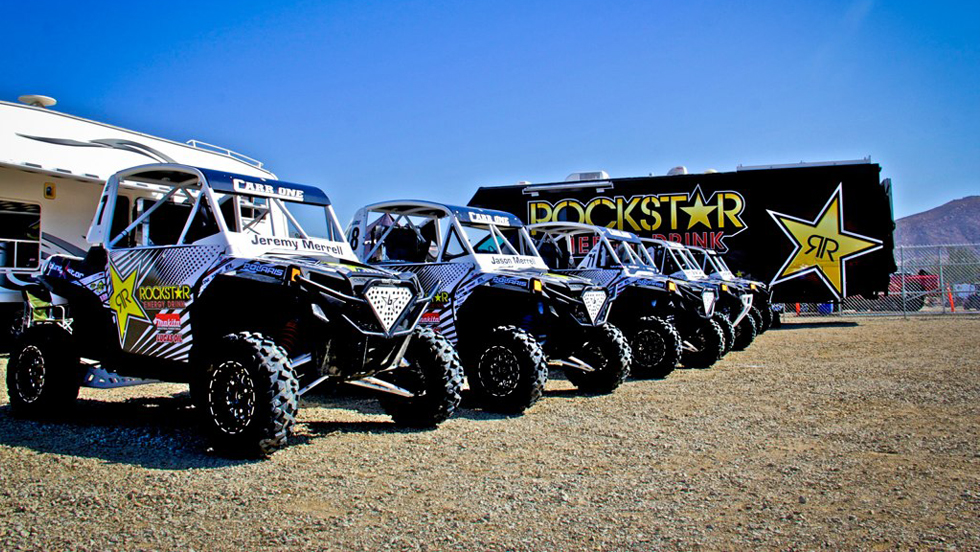 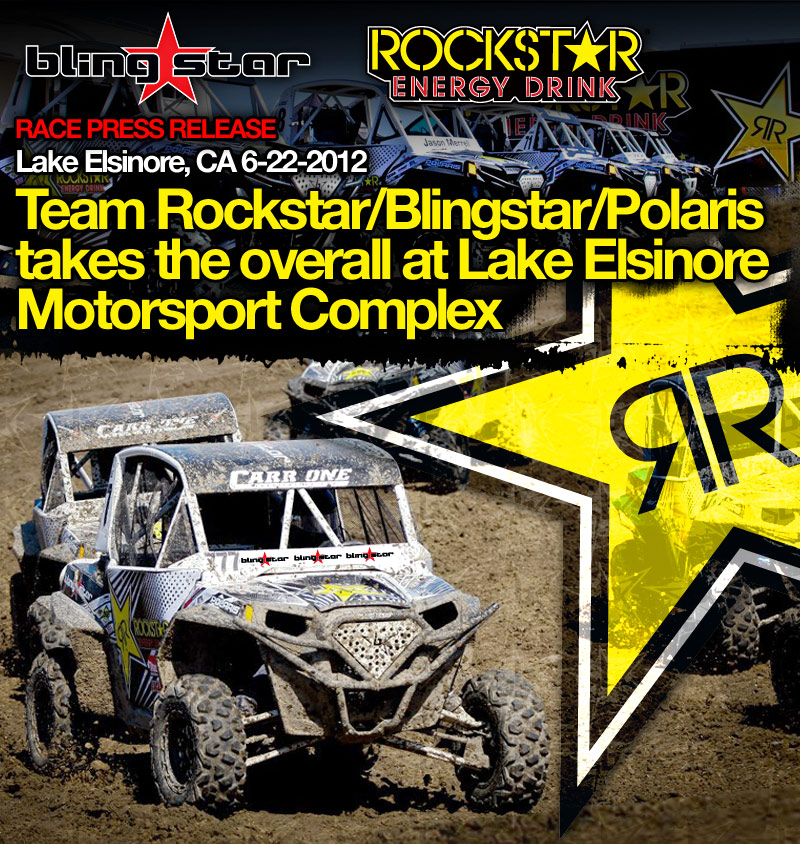 The team is off and running to an already successful 2012 season. The kick off race of the season came a little late in the game, but with 6 cars to build in a matter of 3 months the team had to sacrifice missing out on points at the first Lucas Regional CA series back in March at Glen Helen. However once the team was ready to go, they came out swinging with a crushing 1st and 2nd place at the second Lucas oil regional race of the 2012 season at the Lake Elsinore Lucas Oil Off road motorsports facility.

This is a brand new team and they have been extremely busy preparing for the season since early winter; building cars, working with new sponsors, testing and training. The team is looking forward to getting out on the track and putting the Polaris XP 900 through the paces. Polaris provided a top-notch product; Rockstar & Blingstar stepped to the plate as the title sponsors. Blingstar Products Inc, known for manufacturing the best quality UTV & ATV products in the world, had a vision for the team, which was to improve the UTV market by building & racing the Polaris XP 900 to handle professional off road course conditions. Carr One fabrication pitched in major and built the roll cages, bolt in seat mounts & all sheet metal panels; they have been a tremendous asset to the team while building these cars to be safe & competitive for each driver. A solid lineup of quality sponsors, have helped the team get ready for 2012 race action. Without the people behind these corporate sponsorships the team would not be racing at this professional magnitude. From everyone on the team a huge thank you is to be addressed to everyone who supported the program.

The Rockstar/Blingstar/Polaris UTV team consists of 6 drivers all from various backgrounds, Clint Roberts, owner of Blingstar and Jeremy Merrell from Hart & Huntington, were both initially responsible for campaigning to start a race team. Clint’s relationship with Polaris helped lock down Polaris as a title sponsor. Together Blingstar & Polaris felt it would be a perfect match by paring the new line of Blingstar UTV products, along with the newly released 2012 RZR XP 900 models to support the team. The new Polaris XP 900 has proven with this team aside from safety upgrades to be ready to race right off the show room floor. Bryan Carr, owner of Carr One fabrication and team driver saw the team potential and stepped in to help support the program along with Dad, Leonard Carr. Bryan Carr clinched the first win of the season for the team at round one of the Lucas Oil off road regional series.

Lucas Oil off road regional director Lee Perfect agreed that the Polaris XP 900 needed a platform of their own in the short course racing series, so with Lee’s direction, the long term expertise of Carr One fabrication they together designed a car that Lee felt was safe, tough, and competitive enough to support the Polaris XP900 racing in the Lucas regional series. Carr One has been the first to build a competitive completely bolt on cage safety system to race short course in the Polaris 900 class.

Aside from the above mentioned drivers the Rockstar/Blingstar/Polaris UTV team consists of some important and influential people in the off road industry, Jordan Cochrum marketing activation director & motorsports manager at Rockstar Energy, Jason Merrell CEO Coast Motoring and long time off road enthusiast and driver, Nick Nelson rounding out the top 6, an avid off road driver and media relations expert in the industry. Jason Merrell & Jeremy Merrell both brothers, competitive by nature following in the footsteps of older brother Josh Merrell, pro 4 driver at the PMG EBAY Motors/Hart & Huntington off road team, were able to both gain podium positions at the Lucas Oil Regional Utah race this past weekend, Jason beating brother Jeremy by a hair, to gain 1 st place while Jeremy took home his second trophy of the season with just 2 rounds. Jeremy is 2 for 2 at second place in the Lucas Oil regional series for both CA & Utah.

Big thanks to Lucas Oil who stepped to support and sponsors the team. Lucas oil and the team together created a new opportunity for the budget minded off road race enthusiast, to be able to get involved in a professional racing series with minimal expense in comparison to the national racing program. Polaris built a car that was cost effective and made to withstand some of the roughest terrain in short course racing. The Rockstar/Blingstar/Polaris UTV team is not limiting themselves to just short course, the team is setting their sights on a future title championship in the WORCS racing series as well as conquering a few Best in the Desert races. Keep an eye out for the team at the upcoming Vegas to Reno BITD race happening in August. These cars and driver will be put to the test, they are ready for it!

Team Rockstar/Blingstar/Polaris would like to thank all the team sponsors and supporters of the program, without them none of this would be possible: Thank you –

Team Rockstar/Blingstar Graphic Costs: $355.95 and will be available for most UTV models.

You can learn more about the specs and rules at www.lucasoilregional.com