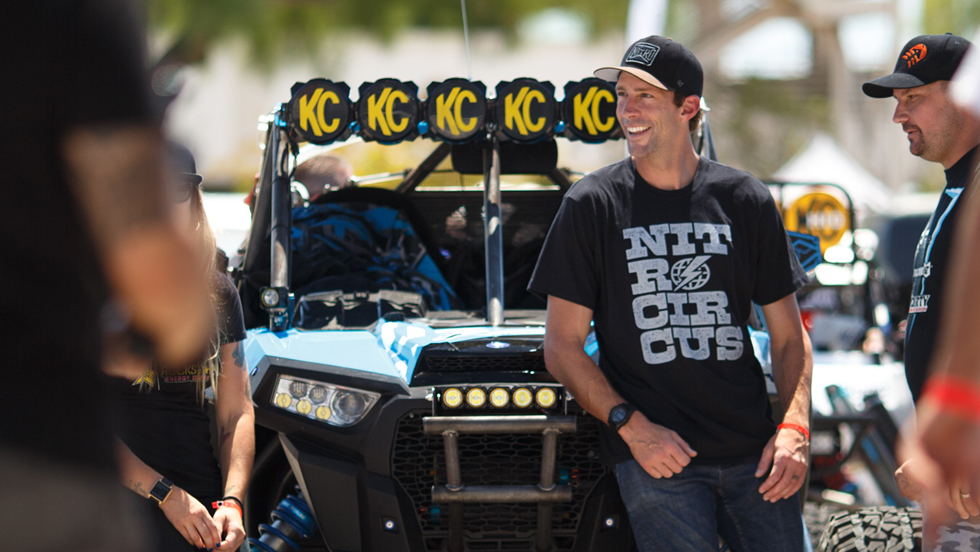 Strong showing for Polaris RZR Star Car at Vegas to Reno
Travis Pastrana, Jolene Van Vugt and Jim Beaver take on longest off-road race
LAS VEGAS (August 21, 2017) – Guest Star Car driver Travis Pastrana put in 300-plus miles of strong driving in the Polaris RZR Star Car Friday, facing down sweltering heat, dust, and rough terrain as he joined team regulars Jolene Van Vugt and Jim Beaver for the longest off-road race in America.
“I drove the Polaris RZR Star Car for 300 miles of some of the craziest desert terrain in the Vegas to Reno and it held up to an amazing amount of abuse,” said Pastrana. “There were jumps and rocks and silt and every other kind of obstacle out there and the UTV handled it all.”
Pastrana took the opening stint, driving the Polaris RZR Star Car off the start line and some 211 miles to the first scheduled driver change. Van Vugt took the reins for the next 100 miles, then Pastrana returned to carry the team to Mile 400.
The grueling race saw heavy attrition, with many vehicles throughout the field sidelined even before the mid-point of the event. Of the 336 total entries in classes ranging from the high-power Trick Trucks, to motorcycles, near-stock light-trucks, buggies, and UTVs, about 200 completed the full mileage to cross the finish line, with crashes, mechanical failures and sheer exhaustion taking their toll on more than a third of the field.
The Polaris RZR Star Car team was on pace for a late-night finish as Beaver and Van Vugt prepared to swap in for the final section to the finish when an inspection during a scheduled stop at Pit 11, in the Gabbs Valley region, uncovered a crack in a key piece of the aftermarket engine safety cage. Mechanics explored a temporary fix and were prepared to get the vehicle moving again just after midnight — nearly 12 hours after the Friday morning start.
But with just over 100 miles of terrain ahead that included some of the roughest and most remote areas of the race course, the team made the difficult decision to call it a night rather than risk an overnight stranded in the hostile Nevada desert for Beaver and Van Vugt.
“Of course the goal is always to finish the race but Travis and Jolene had both done such an amazing job getting to that point and the desert is no joke late at night,” said Beaver. “For us, it’s about having fun, first. We ran a great pace and covered a lot of ground. We’ll get our shot at the podium next time.”
Pastrana described his experience with the Polaris RZR Star Car team as “amazing,” and said he would jump at the chance to do it again. Car Throttle will release full video coverage of the team’s experience in the coming days, with additional social media content coming in the weeks ahead.
“I sure would have liked to get a finish with the team but the whole experience was amazing and I can’t wait to come back and do it again,” said Pastrana.
The action sport star is the latest celebrity guest driver to join Van Vugt and Beaver for a run in the Polaris RZR Star Car, a race-modified 2017 Polaris RZR XP4 Turbo EPS.
In March, Champion racer and television personality Tanner Foust joined the team as its first celebrity guest of 2017 and set a top 10 pace in the Mint 400. For the team’s second race of the year, journalists Alyssa Roenigk and Shaun Ochsner successfully completed a pair of laps each in the UTV World Championships in April. The team will wrap up its season this winter at the Pahrump Nugget 250, November 30 – December 3, in Pahrump, Nevada. The final 2017 guest star drivers will be announced in the weeks leading up to the race.
The team’s participation in select Best in the Desert races is documented in a series of online videos released throughout the season. Follow the Polaris RZR Star Car this season on Facebook, Instagram and Twitter at @PolarisRZR, and by using the hashtag #RZRStarCar and #RZRLife. Find Jim Beaver’s Down & Dirty Radio Show online at www.downanddirtyshow.com  and through all podcasting channels.
Travis Pastrana took on the 2017 Vegas to Reno off-road race in the
Polaris RZR Star Car. (PHOTO: Louis Yio / Polaris)