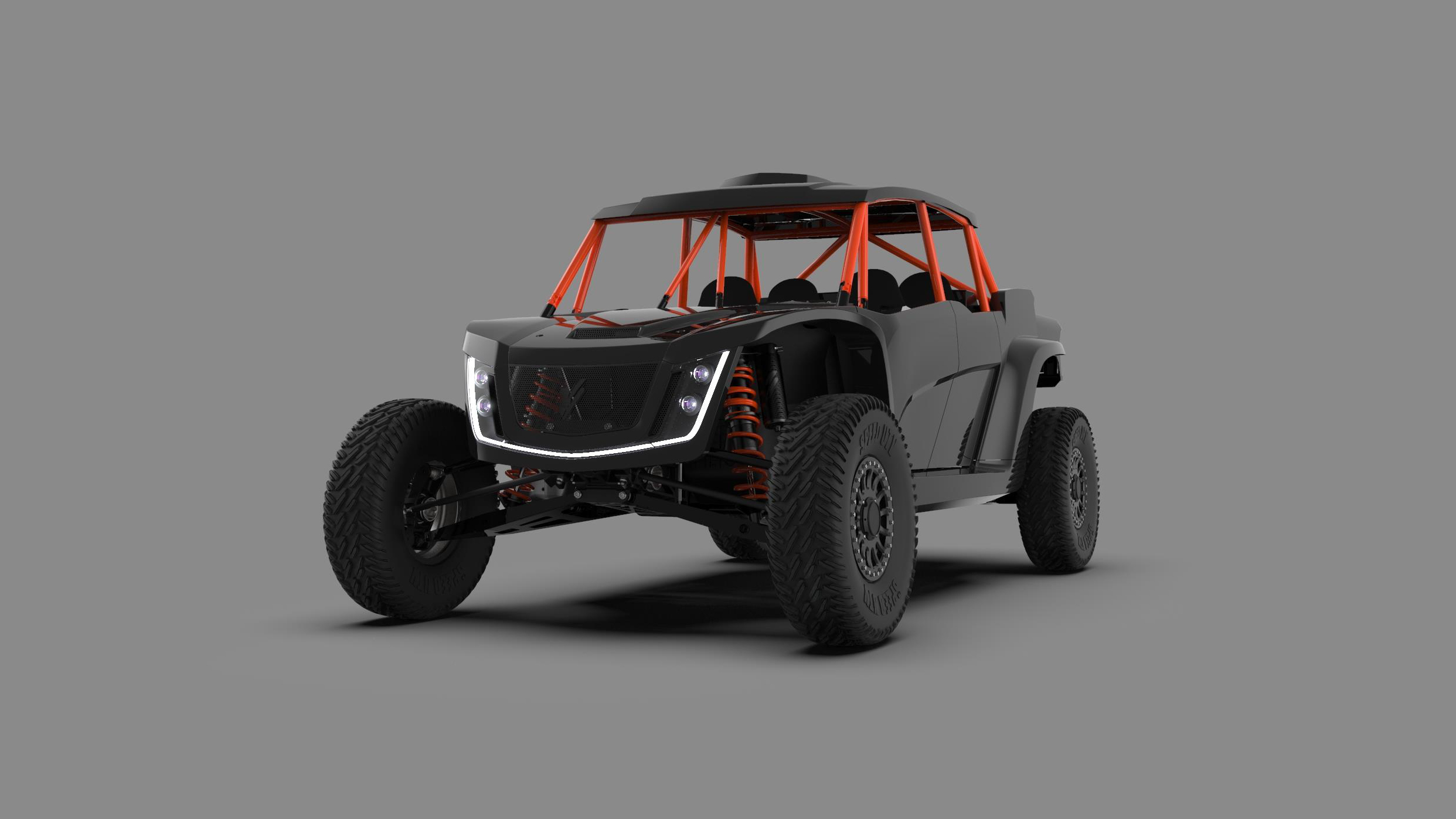 This week we got an up close look at the renders of the interior, got the latest information about the engine and ease of maintenance, and as usual had a ton of questions answered.

We finally got a peak at the interior of the Speed UTV and it looks completely unique from what we’re used to seeing in the sport side by side industry. Keep in mind, these are rough renders so details are still getting ironed out, in the render below we have the RG edition model so you’re seeing the RG edition model upgrades, which include the race radio, intercom and push to talk buttons.

First thing is first, the Speed UTV is coming with vents right from factory. The vents and ductwork will be all in place for you to upgrade to the heating package. The passengers in the back seat of the 4 seat El Jefe will have 2 vents as well.

The reason why you’re getting vents is because the same interior will be used on next years enclosed cab model, that will come with AC and heating right from factory.

Robby Gordon keeps repeating that this isn’t a side by side you’re going to upgrade every couple of years. It’s getting built right from the ground up, and having the vents goes to show that they’re thinking ahead for the future.

The secondary monitor in front of the passenger, is another option you’ll be able to upgrade. The passenger will be able to have their own preconfigured display and be able to see the live technical info or mirror their phone on to the screen. We confirmed that the passenger screen will be fully functional while the car in motion, unlike the driver’s display for which you’ll have to stop in order to change it around.

Robby Gordon said this car will be super easy to work. To change the oil, you’ll have to remove the rear skid plate section, take out a few bolts and out goes the oil filter. The oil filter will be available at your local auto parts store.

All three models of the 2021 Speed UTV will come with different chassis colors. Keep in mind, shocks will be Speed Orange on all three models.

The base model on the Speed UTV will come with a black chassis, black suspension, and aluminum spindles and hubs on which the colors are yet to be determined.

On the limited edition Speed UTV, the the chassis will be black. The suspension components, such as the A-Arms, trailing arms will be charcoal metallic.

We also got a peak at the forged suspension parts. Everything from the uprights, hubs and bearing carrier.

These are the production spindles on the 2021 Speed UTV, they are forged and machined.

The brake rotor has a groove in it, it mounts using 4 bolts, and then it also sits and rides on the wheel studs. When you push on the brakes you’ll be able to stop the car without a problem, even with 35” tires.

The bearing carrier will house a massive wheel bearing made for tall tires and high speed. Robby Gordon said it will be massive in comparison to what’s currently out on the market today.

On the RG Edition model you will get 4 seat covers as well as a steering wheel cover to protect the suede in the event of rain.

Available as an aftermarket accessory you’ll also have the option to get seat pads, which will improve the ride drastically and make the g-outs that much more comfortable.

No estimates yet, but Robby Gordon said it’ll be faster than anything that’s currently on the market.

Why did you decide to go with a CVT transmission & belt?

Robby Gordon said they have learned a lot with the XX, taken the car to Dakar, ran the sand dunes and learned a bunch of neat features that all were brought in production into the Speed UTV.

The Speed UTV will have the biggest fan in the industry, the biggest belt, the LE and RG Edition models will also have a belt tempt sensor. It’ll control the fly by wire throtle. When it notices the belt is getting hot, it’s going to tune it down, keep in mind you’ll be able to overwrite that.

Robby said, overall the belt is a great system, a $130 belt is cheaper and quicker to replace than an axle or gear box.

How hard is it going to be to change the belt on the Speed UTV?

There are 2 bearings at the end of the CVTs, there are bearings on the primary and secondary, the aluminum cover is a structural support that ties the CVTs together. It keeps the case from yanking the input shaft from out of the gear, it’ll also keep the belts and pulley system aligned better than anything in the industry.

Any conversion kit available to bring it down to 72”?

Is the cage welded or bolted on?

The cage is bolted on. The primary reason behind that, is because it’s easier to ship, the rest of the cage and chassis is all welded.

Robby said they will leave it up to aftermarket seat manufacturers to make a bench for the 3rd seat. The console up front is fairly tall, you won’t be able to fit it in the front. You may be able to make an adapter to fit a bench in the back. The team will be coming out with ideas for the back seat.

How is the suspension tuned in the 4 Seat Speed UTV EL Jefe? Will cargo effect the spring rates?

What are the spring packs?

You have 2 stage springs right from the get-go. You will hear some slapping when the secondaries kick in, but you can lower up the secondaries, you’ll have stiffer spring for the sand. You can adjust the ride height. From factory the ridge height will be able 15″-16”.

Available online, Speed UTV will have various suspension sets up, such as for rock crawling, sand dunes, and trail riding, as well as the ideal tire pressure.

The shocks are position sensitive, when the shock shaft enters into the shock can it has increased valving, it starts shutting off valving as it gets in. The shocks are going to be 15-20 stage shocks both on compression and rebound. Not only position sensitive but they also have the proper rising rate. They’re attached in the back with a full body mount, placing them in a max position of compression, max position of spring, along with the ideal optimize rising rate built into the suspension.

Things You Should Know

Stay up to date on our Speed UTV News Page, make sure you check out our Speed UTV article with all the details we’ve got. If you’ve got any question, get a hold of Speed UTV on Facebook and Instagram to have your questions answered.