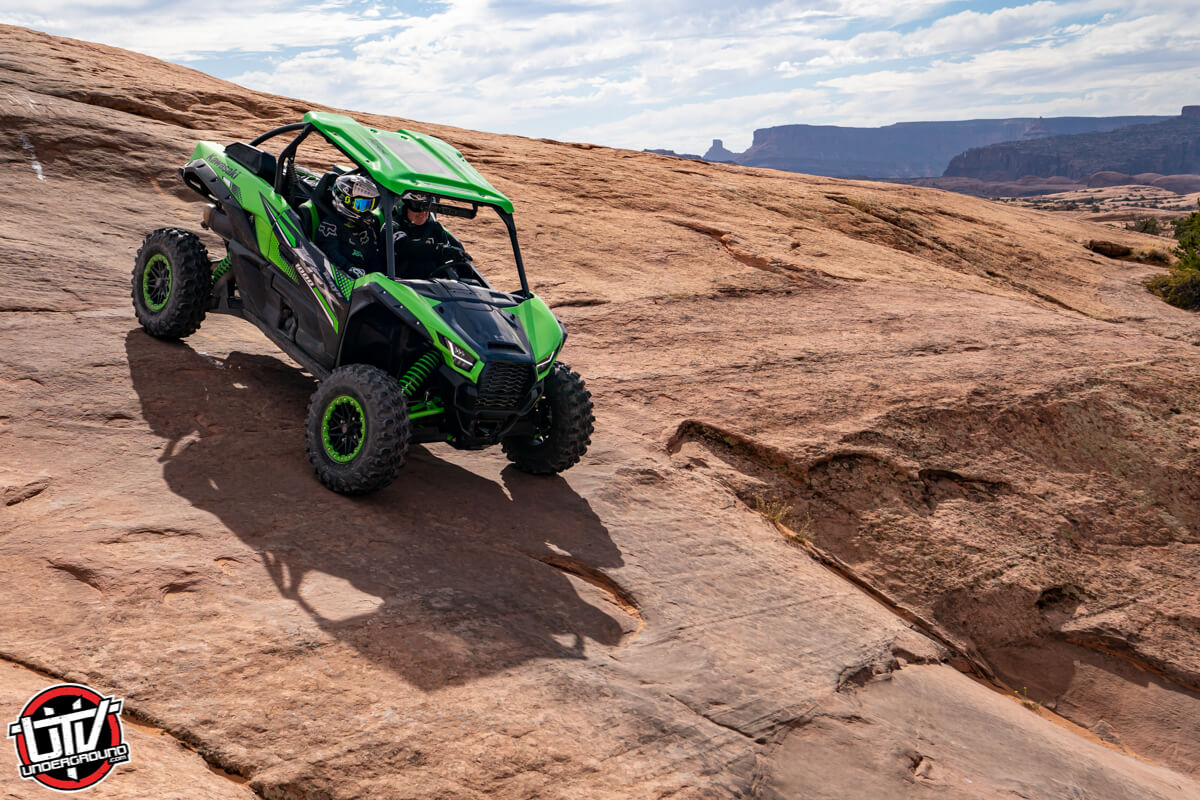 Moab is beautifully stunning. It has so many amazing landscape views that it’s hard to process when you are there. If you have not been to Moab, do yourself a favor and go immediately. Off-roading takes you to a lot of unique areas of Moab, all while surrounded by painting-like beauty. It’s like your driving around in a Van Gogh painting. At times it seems surreal. Moab is super family friendly and you don’t need to take your own UTV, there are plenty of rental places with modern UTV’s. I remember being one of the first who had taken UTV’s with 26” inch wheels, admittedly we struggled up the larger rock obstacles and even had to winch our way up a few. Now UTV’s rule Moab. They have taken over. The evolution of UTV’s continues to this day with the Kawasaki KRX 1000. 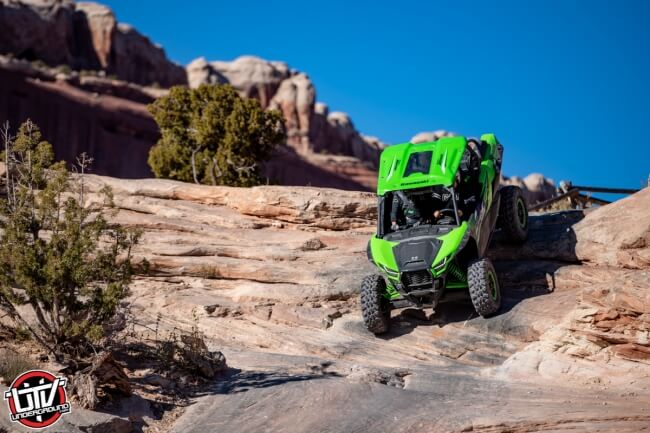 Before the first ride started, our host gathered us in a circle and asked us to join them in a Japanese style radio calisthenics to warm up. Complete with some sort of Japanese music, with counting in Japanese overdubbed. Just like the movie “Gung-Ho” except everybody was into it. To be honest is was refreshing and a good way to kick off the first day of riding. Like a rookie, I had forgotten my trusty full face Impact helmet. Fortunately Kawasaki had an open face helmet with some rather bright neon green goggles they lent me. My fault for being unprepared, but now my whole cool guy 909 dressed in black thing was blown.

When I get the opportunity to drive new vehicles I want to push on them and find their weaknesses. I am going to drive them hard, but safely. My co-dawg for the first day was Ryan, one of the engineers from Japan. I quickly realized he had no idea what the car was really capable of at speed. He gripped the grab bar as if he was on a ride at Coney Island. I assured him we were not going to crash because that was a bad business plan. He did not seem reassured especially after I stuffed the car deep into a sandy corner with a huge hole causing sand to blast up over the hood. Totally fun and normal for me, but he seemed to be a bit stunned. But hey, that’s how we share the gospel of off-road, total immersion. By the end of the day he was having a blast, but still described the ride as “sketchy”. That’s one of my favorite things about off-roading. It transcends culture, language barriers and brings people together through the immersive experience of off-roading. 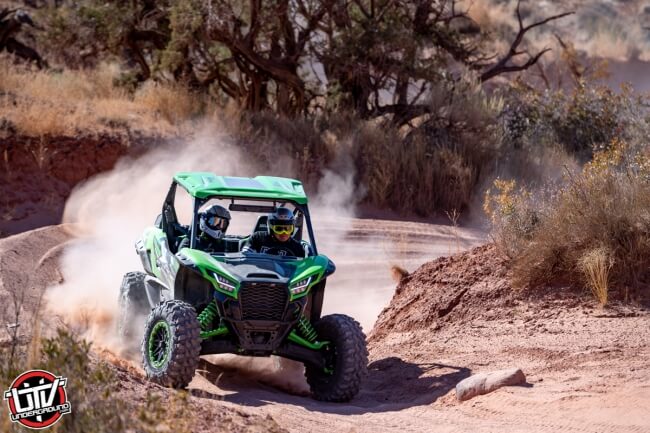 Our first day of riding started out with fast, tight sandy trails on the Seven Mile Rim side. The Kawasaki KRX 1000 handled great in the tight, twisty trails. When we got to the straight areas, I hammered down to see how the KRX would handle whoops over 50 mph. The first fast section I drove a bit conservative and the car felt great, really stable and almost no rear bucking. Once I felt comfortable, I started pushing the KRX harder and picked up the pace through the sandy high speed whoops. We bottomed out a couple of times in the bigger holes but that is merely an easy shock adjustment. I was able to floor it without any fear of loss of stability. Now I am curious to see what this car will do with a turbo and larger tires on it. We made a lunch stop at the famed narrow cave you can walk through. After lunch we want back to the same trails backwards which is always fun. I am always amazed at how switching directions completely changes the feel of a trail. The day ended with unwinding the tight trails we had come in on. We took some brief rally roads back in where I took the opportunity to hammer down and slide the car around a bit. Again, the car felt incredibly planted. I never felt like the car was going to tip over. We got back to our base camp and headed back to town for badly needed showers. 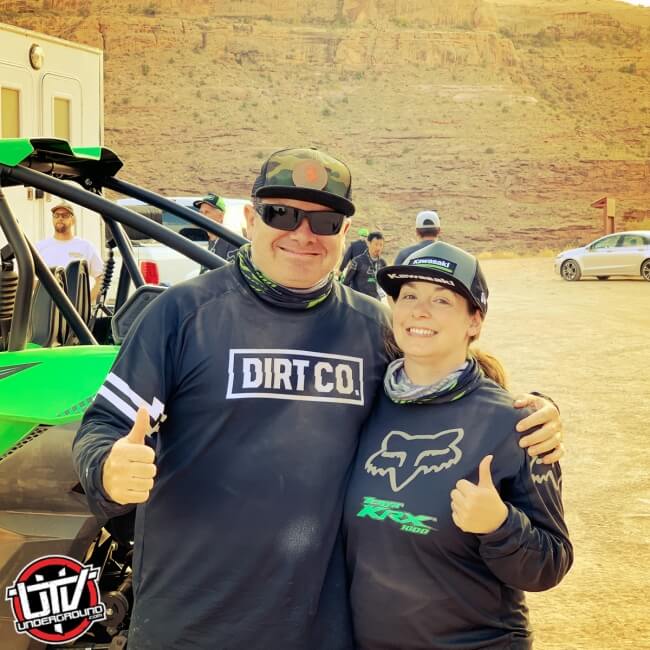 My co-dawg for the second day was Kawasaki PR superwoman Joslyn Petty, aka #offroadmom. She has ridden street bikes, moto bikes, and UTV’s, so she was game. The second day would be mostly rock climbing and tighter trails starting with the famous Poison Spyder to Golden Spike trail. This meant less fast trails and more technical crawling. We started heading up the Poison Spyder trail and immediately started coming to small ledges and waterfalls. The KRX made quick work of the first obstacles. As we got to larger, more technical climbs, I switched into the crawl mode and focused on choosing good lines. The Kawasaki crawl mode function is like cheating. You shift to low, click the power to low and lock the front differential and point the car. It really takes the stress and fear out of some of the more technical climbs. It’s not a solution for every climb. Some climbs you want to approach the section with a bit of momentum, but for most climbs the crawl mode is an easy solution. We made our way through some of the more famous obstacles with ease. Clicking off the obstacles Launchpad, Skyline Drive, and Zuki Hill. Another feature that stuck out to me about the KRX was the ground clearance. We were not getting hung up on the skid plate anywhere. There were a few spots where we were able to go fast, but not many. We had awesome weather – warm, but overcast. We stopped at the Gold Bar Rim lookout briefly to take in the beauty. One of the things I love about this trail is all the twisted Moab juniper trees which resemble life sized bonsai trees. In fact, part of the reason I am so passionate about off-roading is that it forces you to get off the pavement aka “The Black Doom” and get out into nature. After a couple other stops, we headed back down Gold Spike and Poison Spyder back to our start/finish area at the Poison Spider trail head. 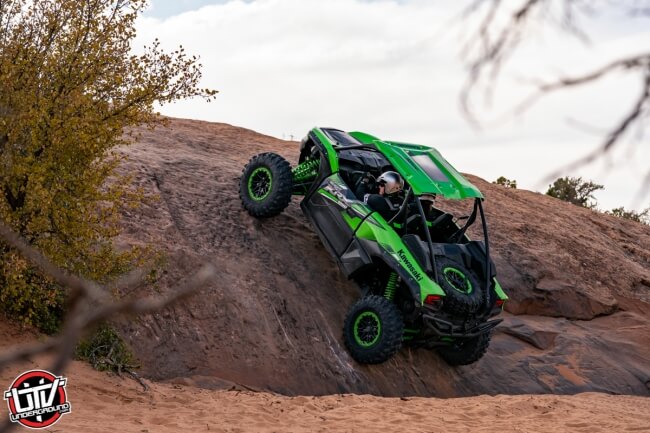 Overall I was really impressed with the Kawasaki KRX 1000 platform. The stability, handling, steering, balance, suspension and especially the crawl feature were all impressive. For most users, this vehicle will be perfect as is. I am curious to see how it performs once we add 32’ tires and a turbo. Go out and test drive a Kawasaki KRX 1000 and decide for yourself. Personally, I think Kawasaki did a hell of a job with their first sport model UTV. 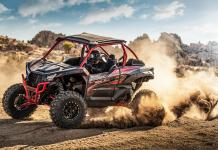