Home All Stories News Taking On Dakar In a UTV 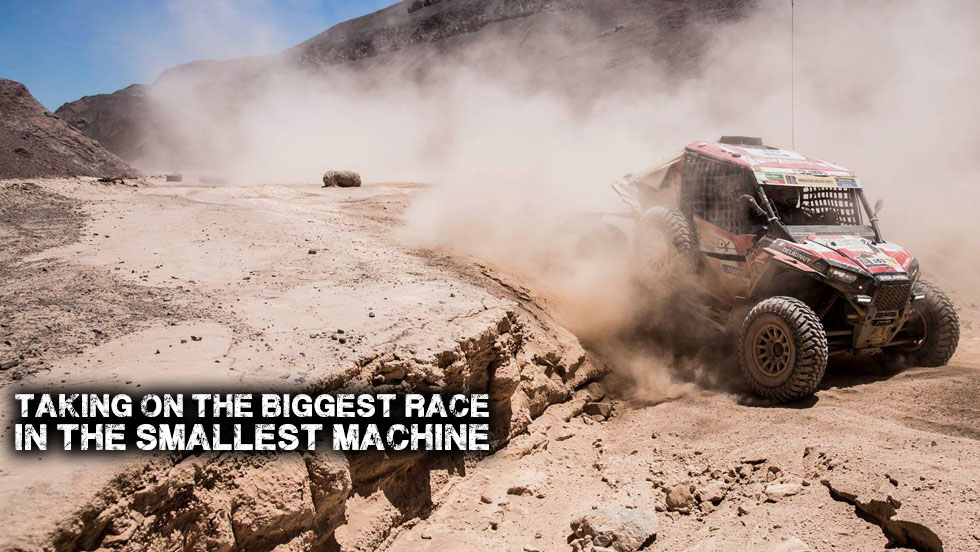 Taking On the Biggest Race In The Smallest Machine

Somewhere in the Atacama desert I sat up on a deserted ridge looking down at a little red dot kicking up a little tail of dust. It was so small it was almost insignificant against the epic Andean landscape. But then a much bigger and faster blue and white dot quickly caught up with the red one, blasted past and completely enveloped it in a huge cloud of dust. The Polaris RZR had slowed down for a small ditch that wound across the trail, the Kamaz (big huge utility truck) hadn’t and was even from my distant vantage point I could see that the truck was in the air when it overtook. A few moments later when the dust had cleared the RZR started again. I shook my head and sat there wondering what it would be like to have a 10 ton truck overtake you in the air, and why someone would want to put themselves through such an experience. 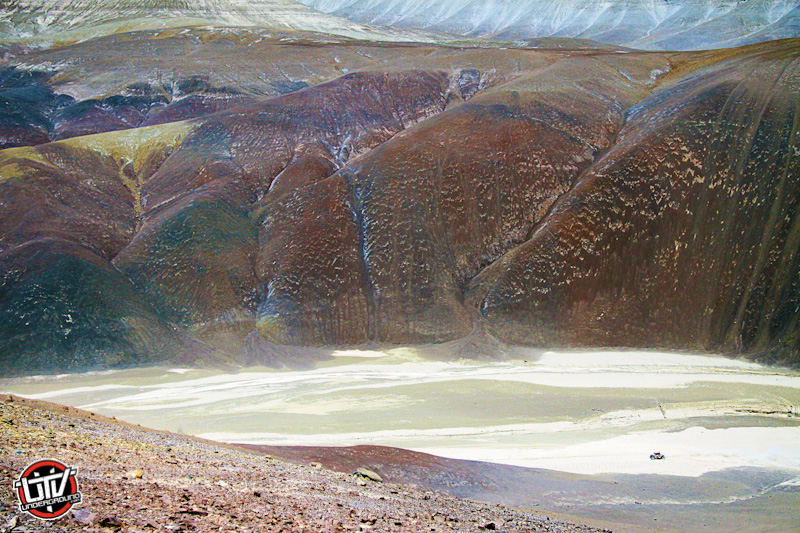 A few days later I caught up with driver Jes Munk from Denmark for an interview, exclusively for UTVUnderground.com and he explained why he was behind the wheel of a Polaris. “Because my wife forbade me from riding bikes anymore,” he shrugged. It might seem a bit of a harsh and controlling thing to demand but while preparing for a French enduro event a couple of years ago Jes crashed… In a car accident you damage mechanical components but bikers don’t have such luxuries as rollcages, race seats and 5-point harnesses. When a rider crashes its bones that are broken. This fall broke 60 and for 12 days he lay in a coma with massive damage to the liver, kidneys and lungs. “My wife had to watch me lying there in the hospital and she decided she’d had enough. Too many broken bones, too many dead friends. But I knew I wouldn’t stop rallying! It’s just too addictive. The recovery started in the hospital where I lay in bed bending one finger at a time, to learning how to walk again and then I got up to doing triathlons… and then to the Dakar again. I just had to. There was no alternative. But I had to make a compromise with my wife, which is why I wasn’t on the bike this time. For a while I had no idea what I could do but then I met Marco Piana, the boss of the Polaris Xtreme+ factory team. He is half Italian and half French which is absolutely the worst combination, but for the Dakar you need a lot of support and the Polaris is halfway between a bike and a car and straight away I was surprised about just how much fun it was to drive, so I signed up. My wife still wasn’t happy but you can’t break any bones when you have a roll-cage around you, right? Well…”

Training for the Dakar isn’t just spending a couple of days out in the dunes, it’s such a massive rally that whole events serve as a shakedown for it but in FIA World Cup events like the Abu Dhabi Desert Challenge and the Spanish Baja, Jes learned that a Polaris is not so similar to a bike. “You can ride a bike much harder than you can drive a car. Going fast on four wheels is all about flow, not just slamming your foot down after every corner but it took me quite a while to really learn that. I was snapping 3 belts in a stage, getting two punctures and even killing the whole engine but in Morocco I finally began to understand. I won that race, although I have to admit that the competition wasn’t so strong… but an argument over a dune with another driver caused another broken bone. In the wrist. 10 screws and a plate, 5 weeks before the start of the Dakar, which was definitely not the best preparation. I got the cast off the day before I left to go to Buenos Aires. I’ve had worse so it didn’t really affect me and it wasn’t a weak arm that was the problem at the start of the event, it was just that the stages were crazy hard!

The first one was just a quick prologue, but the second was maybe the hardest stage I have ever done in my life. It was 585km long but there is a type of soft sand that is like talcum powder, called fesh fesh. You hear the top drivers talk about it but actually it’s OK for them because it’s a bit like mud, the first ones through don’t have too much trouble, but when 100 cars have tried to go through it’s impossible. Impassable. You couldn’t just steer around it because the ground was covered in hundreds of thick bushes that rip your tires to pieces… which is what happened to us. Every tyre was flat! It was a 60km long section and that day it was 50C so we had to stop for 10 minutes to let the engine cool down then go again for another 10 minutes, but I come from bikes so I am fit and I don’t do anything like the Dakar with anyone who is not fit. So my co-driver, Sebastien Delunay was out digging and pushing for a long time. It costs a lot of money to do this race so the least you can do is use your running shoes and get yourself in shape! 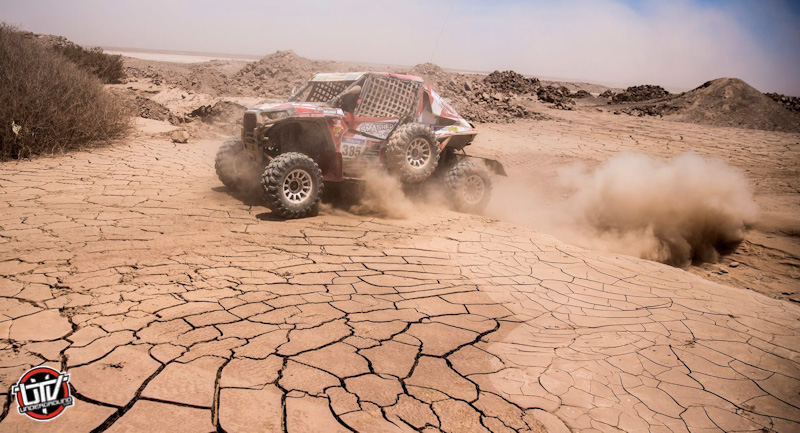 All of the people you see back at the finish have this incredible ‘never give up’ mentality, people like Guerlain Chiceret who had to fix his buggy every day or Benediktas Vanagas who did half the rally with a broken arm, but on this stage I was really surprised to see a lot of people who had just got stuck and given up. They weren’t digging or pushing or fighting and for me that isn’t the Dakar spirit. Half the field didn’t get through that 60km section and only 12 of the bikers did. The organizers had to cancel the stage back to the Check Point before so that the event could continue!

After that stage everything in my memory is just a blur, just a hot dusty hell. No one knows why we are so stupid to come back again and you often ask yourself why we do it again and again but racing is a real addiction. Actually… thanks to my wife I went to two shrinks to see if I could get myself to stop racing. The first just told me to keep living my dream and the second… well, she had never come across anyone like me before and couldn’t help. So I kept on racing!

On the 6th stage I was leading the class by about 6 hours but I was being too aggressive and broke the gearbox. We worked on it out on the stage all night and got back to the camp and 5am… and started the next stage at 6:30. But this is Dakar, you fight, you don’t give up. Never. But the next stage was damn hard. Because of our bad finishing position in the stage before we started right at the back for this one, behind all of the trucks and they are a nightmare to race behind! With their huge tires they make really deep ruts in the soft parts of the course but the main thing is the dust, they just make this huge wall of it and you just have to stop… but then there are the trucks that you’ve just passed coming from behind and they probably wouldn’t even notice if they ran over a little lawnmower parked in the middle of the track. But the Kamaz trucks are the worst, they just don’t care about anything! Just hearing that name makes the hairs on my arms rise up. So dangerous. But then I suppose they fit into this crazy race in some way. But like everything else you deal with them and its another thing that makes the Dakar so incomparable to anything else. It’s just so gnarly. The stages are so long and hard that it is almost not possible to get through without making a mistake, even though the plan is just to drive sensibly and take no risks. A couple of feet wide on a corner can easily give you a puncture, keeping your foot down on a bump will snap a belt and I even rolled one because I was being too aggressive… but it’s hard not to try and race!

Also, I think more Americans should come as it’s perfect for them. No stupid rules, you just race all day, every day, for weeks! It’s a big challenge, just you and the unforgiving desert. 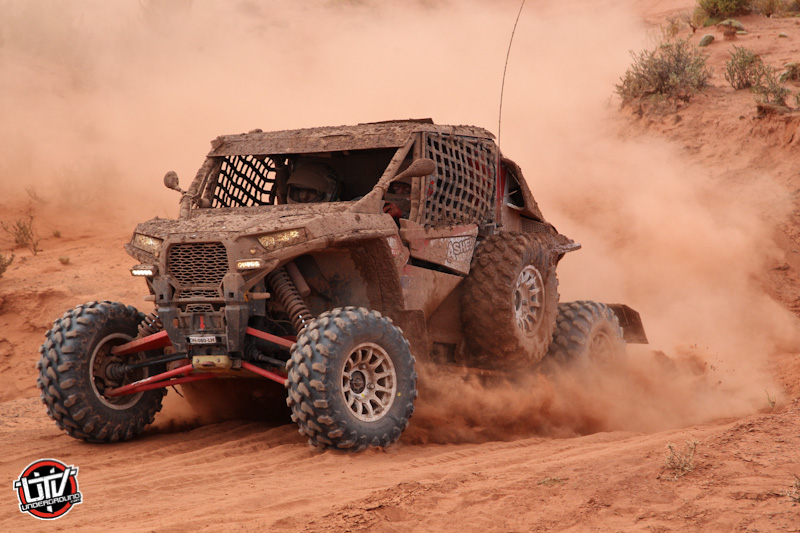 The big plan for this year was just to get to the finish so that I could have as much experience on four wheels as possible and so for that it was mission accomplished. The RZR did unbelievably well to keep going no matter what I did to it and back in Buenos Aires we got 55th place which is not what I dreamed of, but is a good start! Next time the plan is to be in a competitive T1 car, but for anyone hoping to do this event I really recommend taking some time to look at the cost verses capabilities of a RZR and have a serious think about doing it in a Polaris!”