Home Feature Builds Taking on the Paiute in a Teryx4 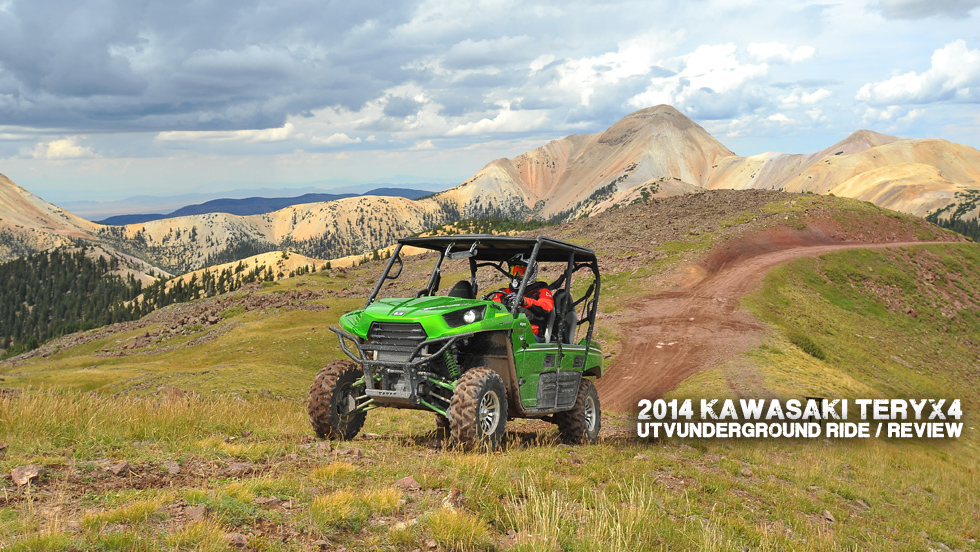 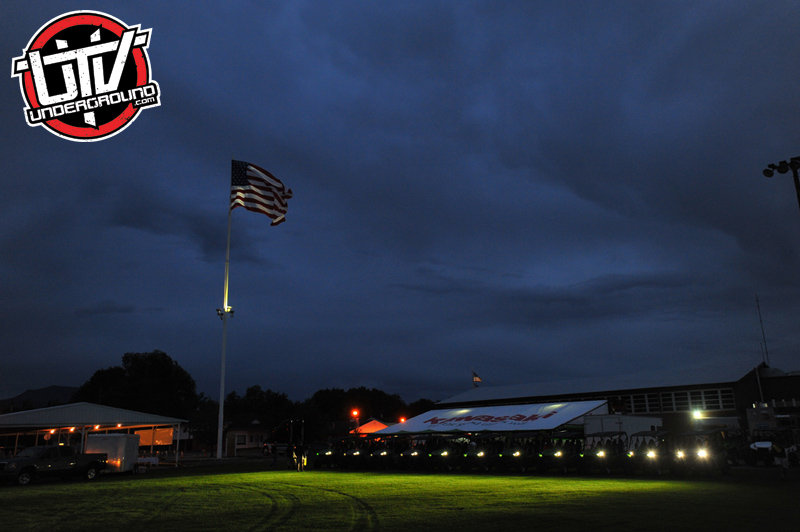 A few weeks ago Joey D. hit me up about covering a Kawasaki Teryx4 intro for him and UTVUnderground.com. The trip was set for the industries top media to off-road through Utah to test the new 2014 Kawasaki Teryx4. I was particularly excited to have this opportunity because not only do I get to get out from behind my desk to go ride, but I also happen to own a Teryx4 myself! I love me some Kawasaki so I was really looking forward to this trip.

The plan was to travel to Beaver, Utah (home to Butch Cassidy) and meet up with Kawasaki. From Beaver we would travel to Marysvale, Utah via the Paiute ATV Trail. The Paiute Trail is located in Central Utah. The trail system has over 2,000 miles of primary and designated side trails. The main loop of the trail is approximately 240 miles and covers four counties; Piute, Beaver, Sevier, and Milliard. The trail terrain ranges from water crossings, rocky valleys, fire roads, cliff side trails, and reaches elevations in excess of 11,300 feet. Besides being a historic trail, its one of the most beautiful trail adventures I have ever seen or been a part of. 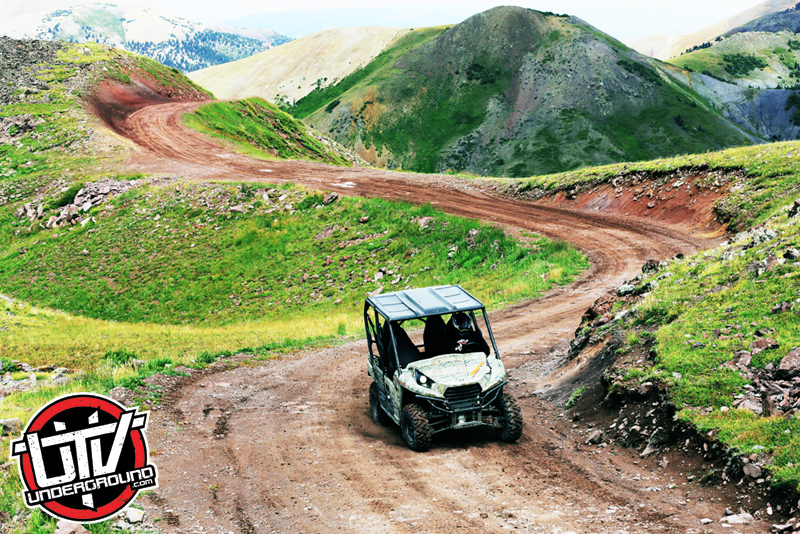 The Kawasaki Teryx4 is the perfect machine for this type of adventure riding. The T4’s new 783cc motor and redesigned intake improved the torque by 10% and hp by 7.5%. The biggest power difference can be felt in the midrange (25 to 40mph). The Paiute trail is very windy with a lot of elevation changes. The improved torque numbers really helped move the machine down the trail with ease. We rode all day at 9,000 to 11,000 feet, and the Teryx4 never faltered. Some of the key bullet points of the new 2014 Teryx4 are that it has a larger displacement engine, adjustable FOX shocks, LED headlights (LE and Camo) and High Gloss automotive paint on the LE Models.

Day 1: Kawasaki and the town of Beaver hosted an outdoor buffet style breakfast at 7:00am. I started my day behind the wheel of a Candy Lime Green LE T4. It was good to grab this one first before this beast got to dirty! The Candy Green really pops on camera! The group lined up and we caravanned down Main Street Beaver like a parade headed for the Paiute ATV Trail. I have to admit it’s refreshing to see a state and a city welcome the Off Road Community as Utah does. For this trip I used my iPhone 5 and Motion X GPS app. The app works off the emergency signal so it does need a cell signal to operate. 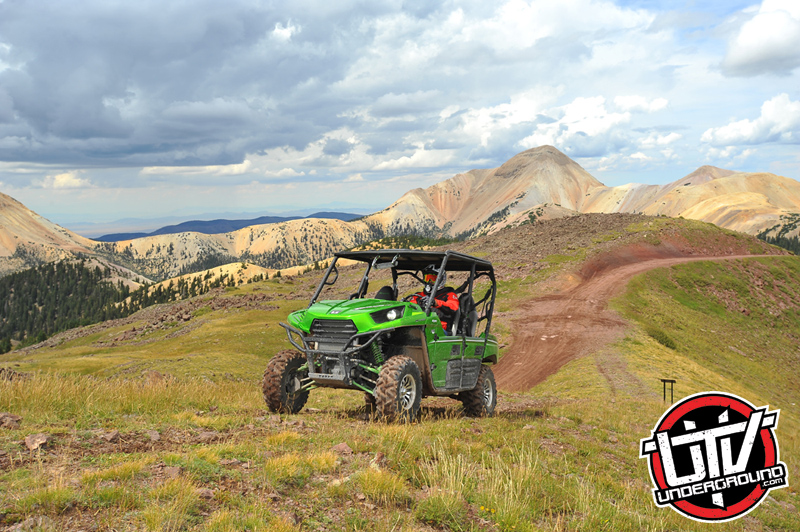 The first 12 miles of our adventure were high speed sweeping turns and nice rolling jumps. It was here that I was able to really feel the difference in the FOX shocks that come factory in the 2014 Teryx4 models. They really work nice and made me think that maybe I don’t need long travel after all on my own T4, I think I just need these upgraded FOX’s. Our first stop of the day was a breathtaking view at 9,300 feet overlooking the picturesque town of Beaver. While we were stopped I made some minor shock adjustments and I did a quick video with Kawasaki about my first impressions. The beauty of this area is like nothing I have seen or been invited to ride through.

During the climb up to the summit I found myself pushing the machine hard. Being that I spend a lot of time in my own T4, I have a good idea what it will handle. Most of my time is spent riding with the throttle wide open in the local deserts of Southern California. The winding trail system forced me to change things up a little and learn the terrain. I quickly found myself pushing the 2014 well past the limits of my own car. The suspension was able handle everything the trail had to offer. The adjustable FOX Podium shocks and the mid-engine layout give the car a great feel. The new weight bias and improved suspension really enhanced the machine’s braking ability and allowed the machine to stop with ease.  26” Maxxis Bighorn 2.0 tires and aluminum wheels come factory equipped on the LE and while I still desire to have taller tires and bead lock wheels these stockers do a great job. The trail is covered with sharp rocks, broken sticks and sharp ledges; basically it’s a tire’s worst nightmare. 170 miles of hard trail riding through these demanding conditions, and not one flat! I am really impressed with the tires Kawasaki selected. 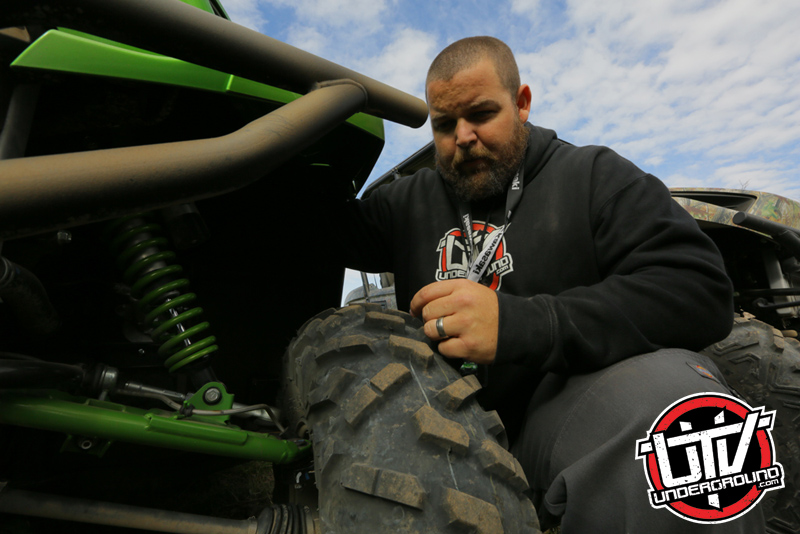 We pulled into Marysvale around 4:00pm, about one hour ahead of schedule, so our group went to TUGS for snacks and drinks. TUGS is a market/gas station and the local hangout. A few locals gathered around to check out the machines. We were staying about 20 minutes from TUGS at Hoovers River Resort. So our group loaded back up and headed for Hoovers. At this point a weather system started to build. This time of year it’s common for the western states to get these wild summer storms. Within 15 minutes we pulled into Hoovers where the staff greeted us wearing Kawasaki shirts and hats. They had planned a really cool outdoor BBQ under a canopy next to the river. The weather held off during dinner but it seemed to surround us waiting. During dinner I had some time to talk with one of the engineers for the Teryx model line. I asked him about the fuel vent mod and he was very interested. He gave me his email address and asked me to share the mod with him. He will look into the issue and see if they can resolve it. As dinner wrapped the storm moved in! All night our cabins would light up from lighting and shake from thunder.

Day 2: The night brought us heavy rains and with morning came no sign of letting up anytime soon. We gathered at breakfast around 7:00am. The Kawasaki team gave us the option to reduce our 125 mile planned ride to 60 miles because of the weather, but we decided to suit up with ponchos and rain proof gear and do the full 125 mile ride. The first section we did was a short 18 mile round trip trail to a silver mine in the hills across from Hoovers. The sky opened up and dumped for the entire section, go figure. The trail was very tight with six water crossings and hundreds of standing mud puddles. The design of the floors and factory doors really kept the water from entering the cab which was a huge positive of the T4. I was able to blast through streams and puddles without getting soaked. Without skipping a beat, our group started climbing to the summit at 11,000 feet. It’s a steep climb full of rocks and mud. This climb is where I really could appreciate the extra 34cc and 10.7:1 compression ratio. The Teryx4 with its unmatched CVT and extra power is a true climbing machine. Waiting for us at the peak was a massive cell packing heavy rain and sleet. We did not really hang out to enjoy the view, so we turned back and headed for the bottom of the valley. At this point our day was almost halfway over and we had already done 50 miles. Our group decided to stop for lunch while the weather was good, and we had a chance to open our hoods and dry our gloves on the warm radiators. 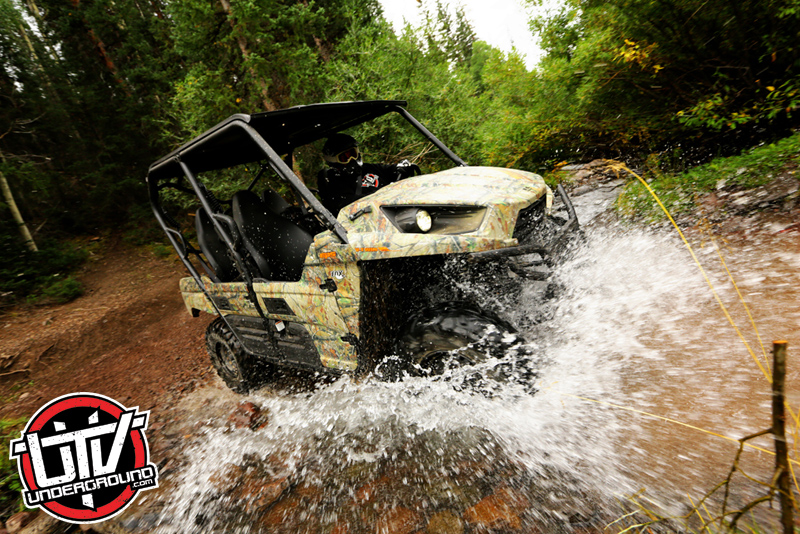 We made one last stop at TUGS for fuel before heading over the mountain back to Beaver. After fueling up and grabbing some extra gloves, ponchos, trash bags and duct tape, we were off to Beaver. The Paiute trail has traffic in both directions. Due to the extensive rain and fog, we had to be extra careful not to crash and we were always aware of what could have been on coming traffic. Once we reached the summit, the storm was again at full strength, and the temperature had dropped to the forties. My hands were numb and I was covered in mud, but you could not wipe the smile off my face. The last 30 miles of the ride were rain and dust free. This section was the most fun I have ever had in a UTV. Since there was no dust, we could run real tight. I spent 30 miles about two feet off the bumper of the car in front of me, I’m too sure if Kawasaki was happy about that or not but it was just too much fun to think about. The Teryx4 is a very stable machine and really instills confidence. Pulling into Beaver, it was apparent to everyone that I was following close by the mud caked on everything, sorry Kawi! lol. The weather in Beaver was nice. My group had a beer on the patio to celebrate the ride and we all shared our different opinions on the T4. Overall everyone was impressed.

All in all the 2014 Teryx4 is a very impressive car. For 2014 Kawasaki improved the power, the suspension, the headlights and the styling. These changes make the 2014 Teryx4 my pick for as the top utility/sport vehicle of 2014. 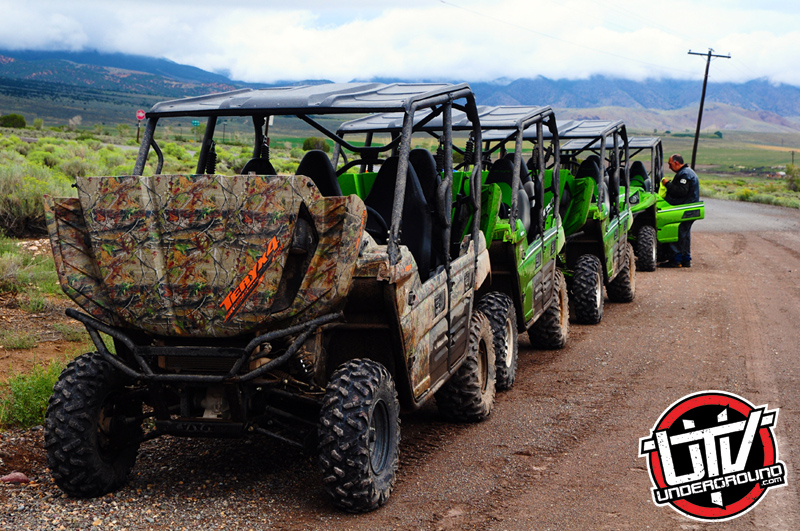 I want to say thank you to Kawasaki and UTVUnderground.com for this opportunity. I was afraid I would leave thinking my T4 is obsolete but all it did was reassure me that I made the right decision in purchasing one. The Teryx4 is fun, maneuverable and I can’t wait to get back out on the trails in one!

Ask me questions about my adventure and the Teryx4 in the UTVUnderground Forum here: CLICK HERE