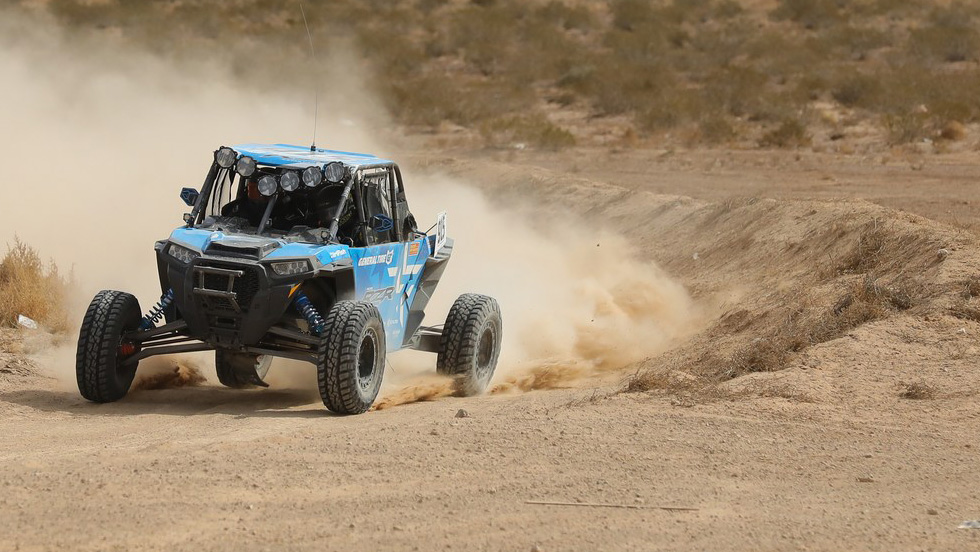 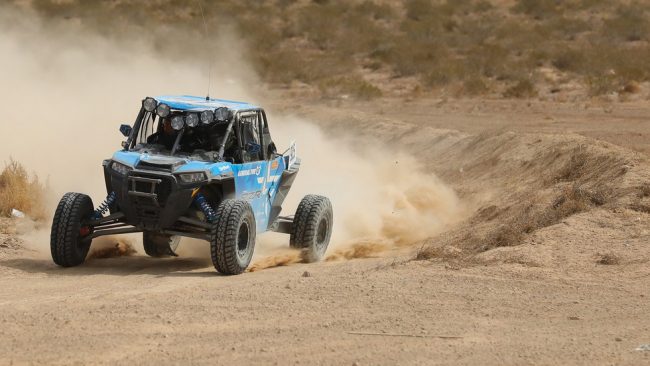 Tanner Foust tackles Mint 400 in Polaris RZR
Versatile driver joins RZR Star Car program for guest drive in famed off-road race
PRIMM, Nevada (March 6, 2017) – Rockstar Energy Drink driver Tanner Foust tackled the notoriously tough Polaris RZR Mint 400 this weekend, putting in a solid drive through the Nevada desert in a race prepared Polaris RZR XP4 Turbo.
“The most common question I get asked by fans is how to get into racing and I love that this is one of the ways you can do it,” said Foust. “In a Polaris RZR, you can get out and race side by side with million dollar trucks on the same course – for a fraction of the normal price of admission.”
It was the first time Foust has competed in the famed Mint 400, known to its fans as the Great American Off-Road Race. He joined the Polaris RZR Star Car team as a guest driver, competing alongside action sport star Jolene Van Vugt and racing radio host Jim Beaver.
Foust drove the second lap of the race on Saturday, picking off the competition as he moved through the field, climbing into the Top 10 in a stacked field with over 100 UTV entries. It was his first time driving the vehicle and he said he was impressed by how capable it was.
“You have a speedometer in front of you and it’s hard to believe you’re covering such rough ground that fast,” he said. “On the Mint 400, there is some of the gnarliest terrain that not even your pickup truck would be able to roll through at a slow speed, and you’re out there in a RZRhitting it at 50 and 60 miles per hour.”
Near the end of his two-plus hour lap, Foust and team co-driver Bryant Shontz stopped to investigate a noise in the drivetrain, and opted to make a belt change and swap a tire that was slowly losing air. While it cost them some time, they were able to return the Polaris RZR Star Car to the main pit for the final handoff.
Foust was enthusiastic about the experience. “There’s a lot of energy in off-road racing. The families involved in the sport, the fan loyalty. It feels like a brotherhood because people know they’re competing against each other but also facing off together against the terrain and whatever surprises the race course has to offer.”
The Mint 400 festivities began Wednesday with a kick-off parade, race truck qualifying Thursday, and the popular contingency procession down Las Vegas’ famous Fremont Street on Friday. Foust spent a busy Friday signing autographs posing for photos with some of the thousands of fans that turned up to take part.
In addition to Foust and Van Vugt, celebrities including car buff and TV star Jay Leno, television personality Jessi Combs and the Diesel Brothers crew were among the entrants at this year’s Mint 400. Robin Leach, a Las Vegas resident who is perhaps best known for his decade-plus tenure as the host of Lifestyles of the Rich and Famous, served as Grand Marshal for the event.
ABOUT TANNER FOUST
Tanner Foust is a versatile and multi-talented driver known for his supreme car control and a proven track record of podium placements, national championships and world records. He is a three-time U.S. rallycross champion (2012, 2011, 2010) who has also won four X Games gold medals (2013, 2010, 2007), and two Formula Drift championships (2008, 2007).
He has held multiple world records including for the astonishing Hot Wheels Double Loop Dare, which saw Foust drive a car through a 66-foot loop-the-loop. He scored the indoor speed record for TV’s Top Gear USA, and set a distance jump record with Hot Wheels when he made a 332′ ramp-to-ramp leap in a truck at the Indy 500.
His varied race experience also includes multiple years of open wheel competition, the Pikes Peak Hill Climb, rally racing, various types of sports car racing and the SCORE Baja. He has represented the USA in the annual Race of Champions three times, teaming with NASCAR star Carl Edwards in 2008, Travis Pastrana in 2009, and Mick Doohan in 2010.
When he isn’t racing, the professional driver also performs on television and handles stunt driving in numerous popular films, TV shows and commercials. He is featured as a stunt driver in Need 4 Speed, as well as other major releases including the Bourne Legacy, Bourne Ultimatum, Fast and Furious: Tokyo Drift, Dukes of Hazzard, Red Dawn and Iron Man 2.
ABOUT ROCKSTAR
Rockstar Energy Drink is designed for those who lead active lifestyles — from athletes to rockstars. Available in over 25 flavors at convenience and grocery outlets in more than 30 countries, Rockstar supports the rockstar lifestyle across the globe through action sports, motor sports, and live music. More at www.RockstarEnergy.com