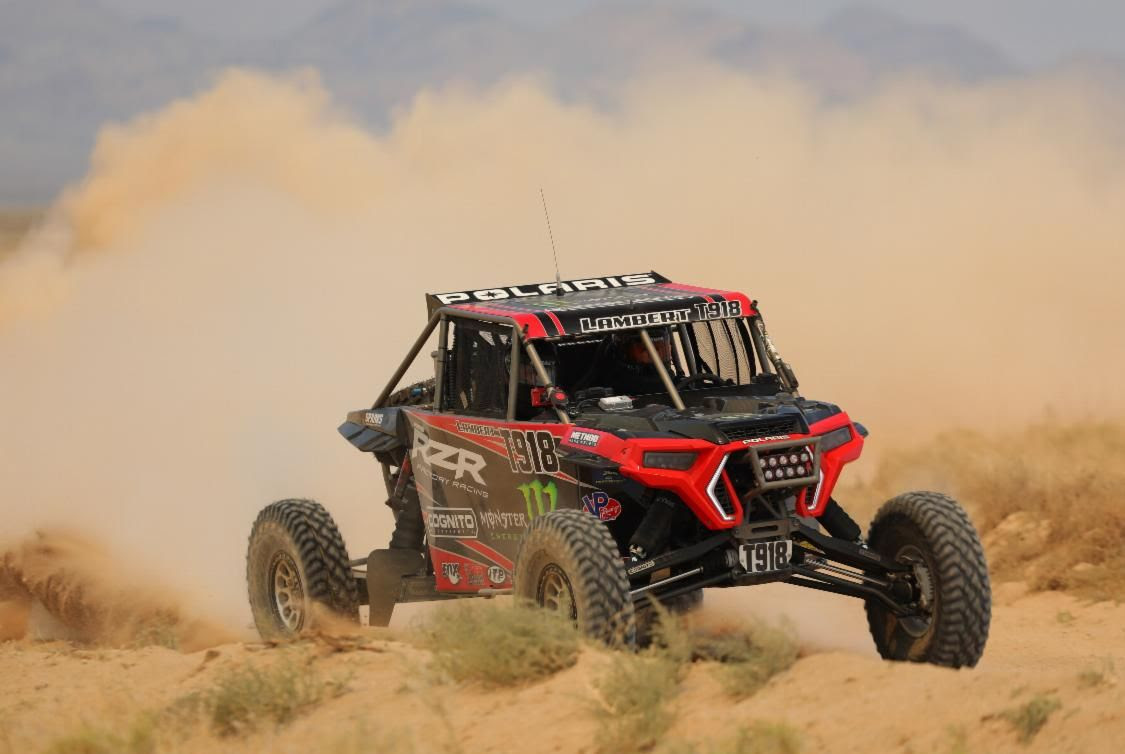 The Silver State 300, which the BITD describes as a race taking competitors through the “Scenic Byways of Nevada,” featured its largest turnout ever with 93 total side-by-side vehicle entries. The event again offered multiple classes for trucks, motorcycles, quads and several side-by-side vehicle classes. The UTV Pro Turbo class made up nearly half the entries, with 46 vehicles. Not only was it BITD’s first race during the pandemic, a raging wildfire caused a last-minute re-route, forcing organizers to cut roughly 80 miles from the original UTV course. The BITD successfully pulled it off to the delight of fans and racers alike.

Jones, aka “Battle Axe,” piloted his turbocharged No. 978 Can-Am Maverick X3 to a strong runner-up finish despite the dusty conditions and deep silt beds. Jones (Can-Am, S3 Powersports, Monster Energy, ITP) put in a time of 04:17:16.479, just three minutes behind the winner.

“Silver State 300 is always one of the most fun and fastest races of the year, but it is also by far the dustiest,” said Jones. “Starting right behind the trick trucks and buggies amplified the dust and silt beds and created a thick batter from start to finish. It’s a race that is always one of the most exciting for our team because any time you get clean air you have opportunities to hit speeds in the upper 90s!”

“We are in our 5th season of desert competition and we have raced on ITP tires since the very first time we put our S3 Power Sports cars on the track,” Jones explained. “We run ITPs for a reason. While they offer great traction and handling, the main reason we stick with ITPs is because they are such strong tires. We trust them to keep us moving and the puncture resistance has saved us in many races. The S3 team have earned many podiums over the past couple of years, including wins in the Mint 400 and UTV World Championship events.”

Justin Lambert (Cognito Motorsports, Polaris), who typically runs the SCORE International series, was able to attend the Silver State 300 race in his turbocharged Polaris RZR because the SCORE series’ famous Baja 500 race was postponed. Despite a few issues during the race, and the wicked dust, Lambert pulled out yet another career top-10 finish. Equally important, the finish allows him to start within the top 10 challengers at the upcoming Vegas-To-Reno race.

“I chose the ITP Coyote 33-inch tire for its comfort, control and toughness,” said Lambert, the defending SCORE Baja 1000 UTV Pro FI class champion. “The Silver State 300 race has many different conditions — washes, rocks, high-speed, tight-and-twisty forest roads. The awesome Coyote tire handled all of that and helped us procure another top 10 finish.”

“We’re grateful these two established side-by-side racing veterans choose to run ITP tires and continue to showcase their proven durability in the desert,” said Rhett Turpin, Director of ITP Sales at The Carlstar Group. “Serious desert racing demands a rugged tire that delivers versatile performance across a wide range of terrains. Whether it’s the Ultra Cross family of tires or the Coyote design, ITP tires continues to be at the forefront of the industry for R&D innovation and the results prove that without a doubt.”