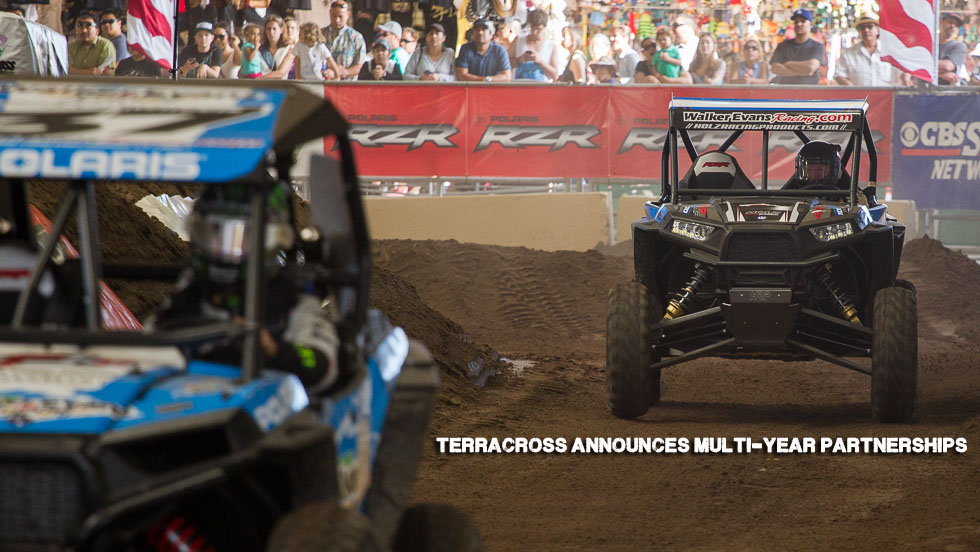 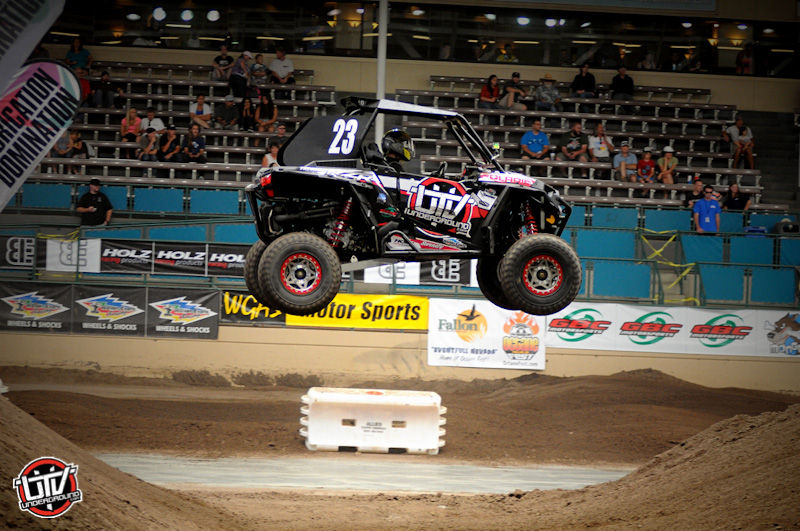 The Mud hasn’t even dried yet from Charlotte Motor Speedway and Terracross is already looking forward to 2015! With another growth year in the books the future is looking bright with guys like Jeremy McGrath, Levi LaVallee, Chad Ragland, Chris Burandt, Colton Moore, and RJ Anderson competing in the 2014 championship as well as looking at 2015.

Even more exciting is UTVUnderground.com is announcing a two year program with Terracross from media support, racers competing, exposure at events and some big news to be released at a later date that will blow your mind.

“Currently, no other series in our sport is doing what Terracross does. They match the biggest names in action sports with some of the coolest off-road vehicles in the world in the Polaris RZR, stick them on a tight and exciting race course and let the drivers go toe-to-toe in an all out vehicle fist fight! Its the closest thing UTVs have to Supercross and we couldn’t be more excited to be a part of the series as we move forward to 2015 and 2016. We’ve had a lot of success in participating and promoting with Terracross the past couple of years. We have gotten a massive return in exposure for what we have put into the series with UTVUnderground.com thanks to having our own race RZRs competing in the series. Terracross is putting UTV racing in front of massive audiences and we love being a part of that and sharing this exciting series with our own online audience!” – Joey DiGiovanni / CEO – Founder of UTVUnderground.com 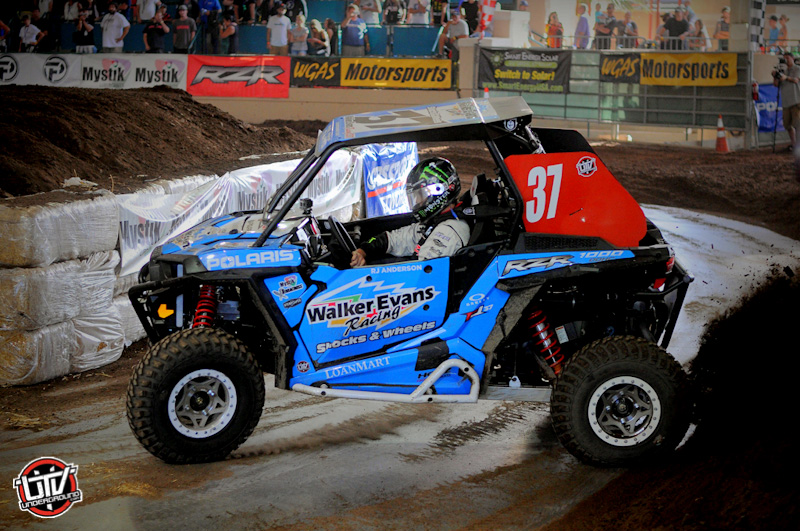 “Walker Evans Racing has had a great relationship with the Terracross Championship the past couple of years. It allows a larger audience to see what our products do in a highly competitive environment. Every single Polaris RZR at Terracross has our factory shocks on them and almost all are running our 14″ bead lock wheels. The courses are hard on the equipment and the drivers are flat out abusive to the parts so when people see those shocks and wheels withstanding the punishment these guys put them through, they know that on their own play vehicles they will hold up. We really like what Terracross is doing for the sport of UTV racing and we are proud to be a part of the series for the next 2 years.” – Randy Anderson / Walker Evans Racing

RJ Anderson, known as the face of UTV racing, has starred in his own viral video campaign “XP1K”, won a Pro UTV & Pro-Lite Championship at the Lucas Oil Off-Road Racing Series and was just named the series’ Pro-2 Rookie Of The Year. He also won the 2013 Terracross Championship and was the man to beat all season long during the 2014 race year. He will be back once again and is looking to reclaim the Terracross Championship title.

“I love racing at Terracross. This year the competition was huge and the tracks were even more fun. I am stoked to be able to represent Polaris and Walker Evans Racing and really look forward to all of the big things coming in 2015 at Terracross.” – RJ Anderson / Professional Off-Road Racing Champion & 2013 Terracross Champion

UTVUnderground.com, since joining the Terracross Championship in 2013, has introduced professional off-road racer Chad Ragland (2013) and rising star Mitch Guthrie Jr. (2014) to the series. Guthrie Jr. came out guns blazing taking home the win at the opening round of the 2014 season in Del Mar. Both drivers have accomplished off-road racing resume’s with most of Ragland’s accomplishments coming behind the wheel of the sports elite Trophy Truck race vehicles. Ragland, son of off-road legend “Lighting” Larry Ragland, got to have some fun when his father came out to play at the series alongside his friend and fellow icon Walker Evans at Rounds 1 & 2 in Del Mar.

Guthrie Jr., who’s father is a multi-time UTV champion at the famed King Of The Hammers event, is one of the fastest rising stars in all of UTV racing. He cut his teeth in the Lucas Oil Off-Road Racing Series racing the highly competitive Trophy Kart class then moved into UTVs where he has competed at the WORCS series where he would win the Production 1000 championship in 2013 In 2014 Guthrie Jr. would make his debut in the Terracross Championship as pilot of the #23 UTVUnderground.com / Walker Evans Racing / SuperATV.com Polaris RZR. Guthrie Jr. is a factory sponsored Polaris RZR driver and has showed signs of greatness while competing in the Pro-UTV class at WORCS this season finishing just points shy of the 2014 season championship.

“I am super lucky to be able to race for Polaris RZR & UTVUnderground.com and compete against some of the fastest UTV racers in the world. It was a lot of fun having the opportunity to race at Terracross this year for UTVUnderground.com, Walker Evans Racing, SuperATV.com and of course Polaris. I am really looking forward to driving the #23 next year and can’t wait to hear all that Joe Duncan has in store for us!” – Mitch Guthrie Jr. / #23 UTVUnderground.com Terracross Polaris RZR Driver

More big announcements are coming in the near future with event locations, TV commitments and more racers! Its going to be a really exciting 2 years for Terracross.

“Terracross is so excited to have UTVUnderground.com back on board as one of our GREAT media partners. UTV Underground has been instrumental in exposing Terracross and its unique, high action entertainment television property as well as being a committed partner for racers, media, events and exposure.” – Joe Duncan / Terracross Sport Organizer 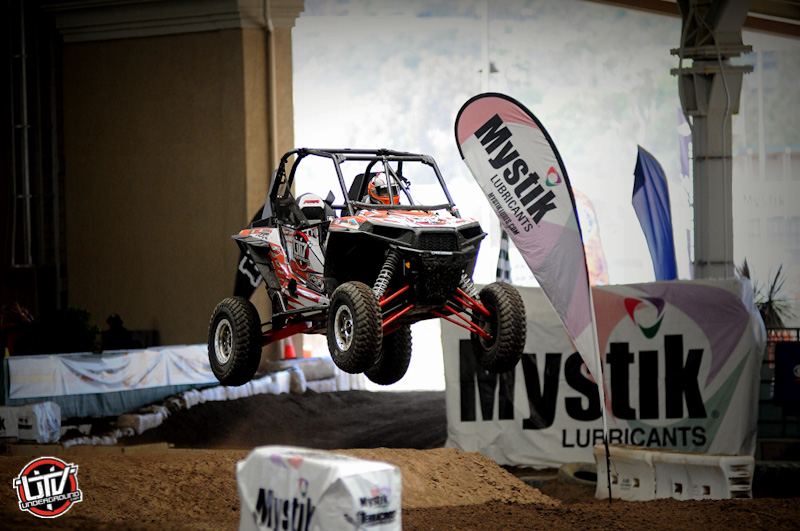