Home All Stories News Terracross Is BACK For 2014!! 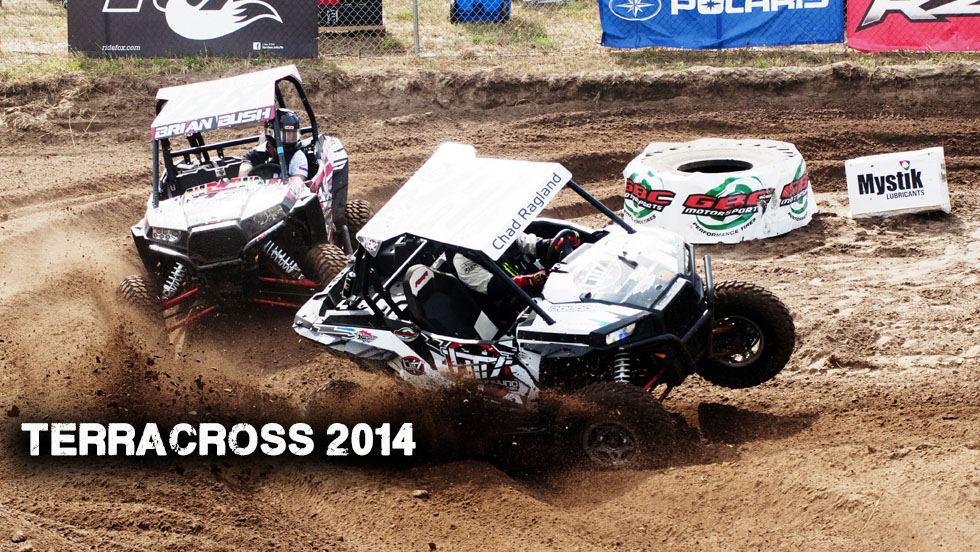 Terracross Racing is BACK for 2014!

UTVUnderground.com is pleased to announce that for our second consecutive year we will be working closely with Joe Duncan and his team at the TERRACROSS CHAMPIONSHIP to bring UTVUnderground.com readers all the up to date news and information surrounding this one of a kind race series. In addition to our excitement about the Terracross Championship televised race series, is the kick off round at San Diego’s massively popular San Diego County Fair at Del Mar Fairgrounds! Del Mar is the perfect venue to bring Terracross to Southern California. Its location on the coast of San Diego and its huge daily attendance makes for one of the coolest venues to ever host a UTV race event! UTVUnderground plans to attend every round of racing but will undoubtedly have a large presence at Del Mar! We encourage all of you from Southern California to join us June 28-29 in what will surely be some of the funnest racing ever held for UTVs!

UTVUnderground.com once again will partner with Terracross and series sponsor Polaris to field our #23 RZR XP1000. Last year we brought Trophy Truck driver Chad Ragland to the series to drive our machine, this year Ragland will pilot his own RZR and UTVUnderground.com will introduce a new driver to the series. Mitch Guthrie Jr. has inked a deal with UTVUnderground.com to represent the #23 UTVUnderground.com / Walker Evans Racing Polaris RZR XP1000 throughout the 2014 Terracross Championship Season. Guthrie Jr., son of King Of The Hammers UTV legend Mitch Guthrie Sr., is one of the hottest up and coming UTV racers in the nation. Guthrie Jr. is currently competing for a Pro UTV Championship at the highly competitive WORCS racing series. Mitch is not afraid to go door to door and has the talent to put the #23 RZR on the box every time he gets behind the wheel.

Big names have been thrown into the hat to compete this year at Terracross. Of course the reigning Terracross Champion RJ Anderson will be back in his #37 Walker Evans Racing Polaris RZR Xp1000. Star of Polaris’ UTVUnderground Presents: RJ Anderson’s XP1K viral video, the young off-road star is sure to put everyone at Terracross to the test. Names like Levi Lavalle, Colton Moore, Jeremy McGRath and many more have been tossed around to potentially compete as well. We can’t wait to see who shows up this year in this explosive short course MX racing series.

Do you want to race Terracross?? Well YOU CAN! For SERIOUS inquiries ONLY, contact: Joe Duncan, [email protected] to find out what it takes to get your very own Polaris RZR Xp1000 Terracross race vehicle! No where else can you race in front of packed crowds and get your sponsors valuable TV time through Terracross’ CBS Sports Network television package!

See you all at the track!

Minneapolis, MN (June, 2014) – Top Action Sports athletes including some of the biggest names in extreme sports are set to compete in the upcoming 2014 Terracross Championship. Entering it’s third year of National competition, Terracross racing is some of the toughest and most challenging racing on the planet with drivers racing in a brutal mix of mud, rocks, logs, tire, obstacles, high-speed dirt turns and motocross-style whoop sections.

The tour kicks off out West June 28-29 with the San Diego County Fair and famous Delmar fairgrounds playing host to over 75,000 people each day. As many as 1.5 million fair goers and racing fans will experience Terracross racing over the 24-day length of the fair.

The next stop on the tour is scheduled for September 6-7 at Haydays Power Sports Event just outside of Minneapolis, MN. This event is touted the official kick-off of winter in the North country and last year drew a record breaking 44,000 power sports enthusiasts from all over the world.

The third and final stop on the 2014 Terracross Championship will take place in conjunction with the Auto Fair at Charlotte Motor Speedway September 18-21, in Concord, North Carolina. You can expect some of the toughest racing here as athletes fight to the end in pursuit of the Terracross Championship title. Billed as “The worlds largest automotive extravaganza,” the Auto Fair in Charlotte is the largest event of its kind and is expected to attract more than 100,000 automotive and powersports enthusiasts.

Joe Duncan, Sport Organizer for Terracross is excited about the growth of the series.

“This is going to be an amazing year of racing,” said Duncan. “We have more big-name Action Sports athletes joining the field and some big new locations on the schedule. We’re going to bring Terracross to hundreds of thousands of new fans at events as well as on TV.”

All events will be aired on CBS Sports Network. (Schedule to be released soon)