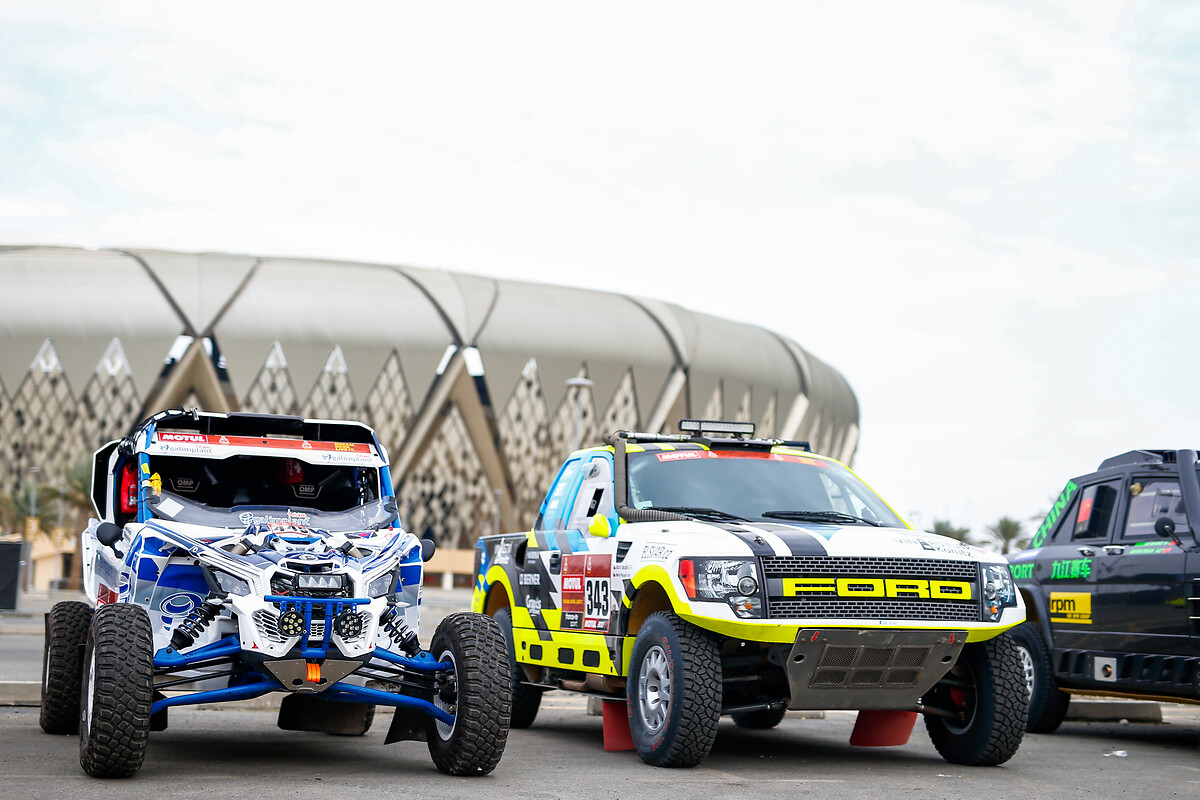 ALL ROADS LEAD TO JEDDAH

For the last few days, Jeddah, its port and airport have been humming to the rhythm of the Dakar. Riders, drivers and co-pilots, preceded or accompanied by their assistance teams, have been milling around the docks since yesterday morning to retrieve their vehicles. It brought to a close a two month separation for the South Americans, whose cars, bikes and quads sailed in three cargo ships from Lima, Santiago and Buenos Aires. Peruvian rider Fernanda Kanno, who took the precaution of arriving in Saudi Arabia several days earlier to have time to get over the jet lag, was overjoyed to reacquaint herself with her Toyota Land Cruiser in the sunshine of Saudi Arabia. The largest shipment set off ten days previously from Marseilles on board the Jolly Paladio, which contained all the European vehicles (race, assistance and organisers). Some of the Asian and South African competitors chose to arrive by air and were able to complete the customs formalities at the airport, whilst the closest neighbours to the countries of the Arabian Gulf set off to reach Jeddah by road. In fact, it is at the unloading docks located on the coastal road near to the Dakar Village that all the vehicles are parked, as they await the veritable start of the action.

Very little information about the participation of Cyril Despres on the Dakar 2020 has filtered through into the public domain, following his 5th place last year in Peru behind the wheel of a Team X-Raid buggy, and not without reason, because the project he has been discretely preparing hinged on a significant condition… The five-time winner of the Dakar on a bike has been a long-standing acquaintance of adventurer Mike Horn and offered him the opportunity to be his co-pilot in a Team Red Bull SSV. Thrilled at the possibility of making a “childhood dream come true”, the globetrotter of the poles and summits accepted the challenge, but a turn of events seemed set to put paid to such an adventure. His crossing of the Arctic Ocean on skis to the North Pole was severely disrupted by the worrying reduction in the size of the ice pack. The delays incurred and the danger to which he was exposed threatened to compromise the formation of this illustrious duo on the Dakar. However, Horn will indeed be able to respect his commitment to Despres in Jeddah: “My life as an explorer has led me to many different places and now to the Dakar Rally. I got stuck on the ice for a month, but thankfully I’m now on my way to Saudi Arabia to meet up with my friend Cyril Despres”. The Frenchman will be undertaking a double sporting challenge on this year’s race: he will be in the reckoning for victory in the SSV category, but will also be participating as a figurehead of the Red Bull operation aimed at promoting the category and discovering new young talents. This year, the operation’s hopes lie with the Americans Blade Hildebrand, 21 years old, and Mitch Guthrie Jr, aged 23.

THE SAUDIS OF THE DAKAR: A DREAM AT HOME

Twelve vehicles will be ridden or driven by Saudis this year, which is of course a record for the country. It had already been represented several times in the higher reaches of the general standings by Yazeed Al Rajhi, but this year the nation will be involved at all levels of the standings and in all categories. Though Yasir Seaidan, who already displayed his talent in the T2 category in 2016 (39th overall and 3rd in T2), may perhaps have the opportunity to close in on the top 10 behind the wheel of a Mini, it is very unlikely to be the case for Mohammed Al Twijri. Although he has taken part in a dozen rallies each year, he designed and prepared his 4×4, based on a Toyota, by himself and is simply hoping to complete the race: “I’ve been working on it for five years and making improvements after each competition. When I learned that the Dakar was going to take place in Saudi Arabia, it felt as though my dreams were coming home to me”. Ibrahim Al Muhna shares the same philosophy, but with several tens of thousands of kilometres more under his belt and will be driving a truck: “I have taken part in 138 rallies in the Middle East and North Africa and I’ve completed all of them. Most of the time I was driving a car, but nevertheless this will be my 10th rally in a truck. I’m optimistic, so I think I have a 100% chance of reaching the finish”. The only Saudi biker on the Dakar, Mishal Alghuneim, is a little more measured in his outlook, aware of the responsibility that he will bear and the difficulty of the challenge: “I’ve just become champion of Saudi Arabia and that has helped my confidence a lot, but it’s the first race I will be taking part in not to perform but just to finish…”

EDWIN STRAVER: “THE MAIN TARGET IS TO FINISH AGAIN”

Edwin Straver is delighted to be discovering the Middle East after two experiences in South America. At the administrative and technical scrutineering organised in Jeddah, the former motocross rider cannot wait to set off for Al Wajh on the long and tough first stage. “It’s great to change scenery,” comments Edwin at the exit of the briefing on how to use the Iritrack system correctly. “I rode two Dakar rallies in South America and even though I adore that continent, we were starting to go round in circles a bit. Last year, lots of the stages used already well-known tracks. This year, it really will be a brand new adventure”. Having triumphed last year in the Original by Motul category, Edwin Straver has decided to do it again for the first Dakar organised in Saudi Arabia, as an unassisted biker, and not just to save money. “Going it alone suits my character and my way of seeing the race,” asserts the strapping Dutchman. “I’m perhaps not the fastest rider, but I’m a good all-rounder and fairly consistent. What’s more, coping on your own is the genuine spirit of rally-raids”. This year, the organisers have decided to give a slight helping hand to these adventurers by limiting the time for road-book preparation for all the riders. “The road-books we will receive will already be colour-coded and often handed out in the morning,” a point which pleases Edwin. “It will help us, because when you take part in the Original by Motul category, you don’t have much time to spend on preparing the road-book. When you arrive at the bivouac late in the evening, your priority is checking the bike and getting some rest”. Despite his victory in 2019, the Dutch rider’s ambitions are on the cautious side. “Last year I won, although it wasn’t my target,” he states. “So this year the main target is to finish again. It’s a win for every rider who gets to the finish, especially for this edition, when there will be forty-something unassisted bikers”. To spice things up, the route will also be rich in surprises. “There will be a lot of rocks and sand,” declares the KTM rider. “I think the riding will be about the same as last year in Peru. Maybe they will make the navigation a little more difficult”. We shall get an initial idea of whether he is right on Sunday 5th January.