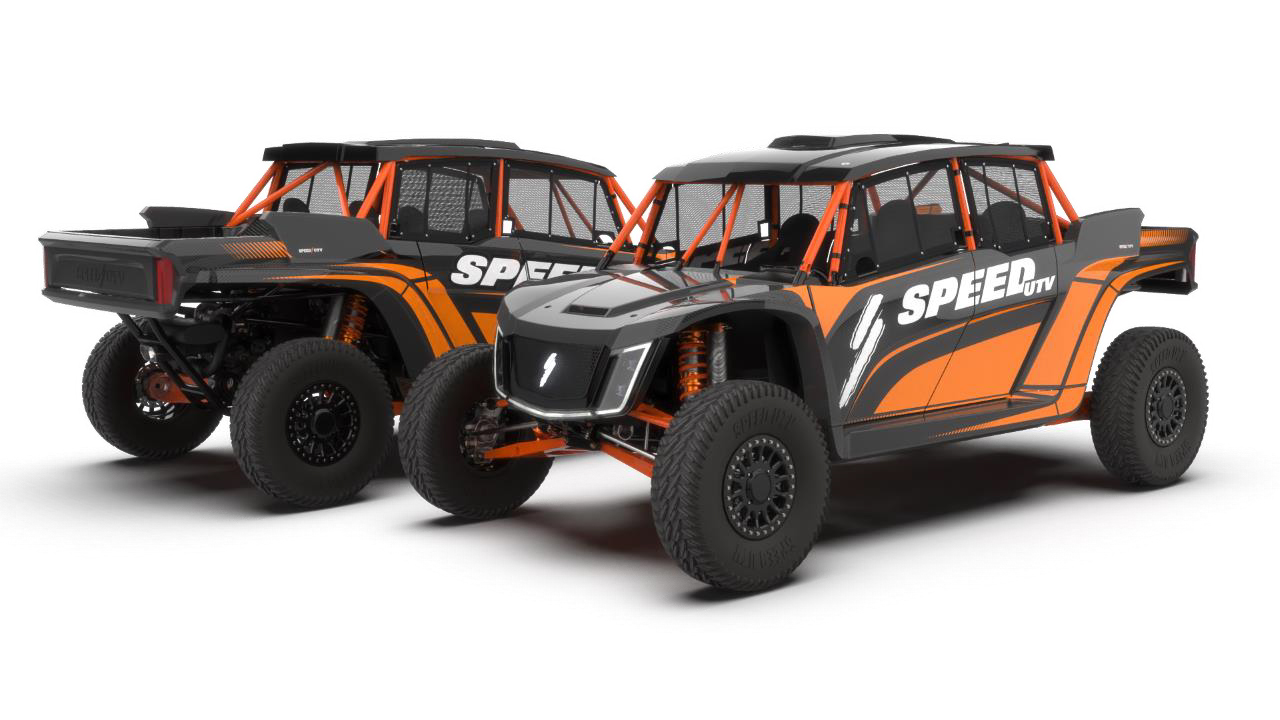 We have a ton of updates from this and last week’s Speed UTV livestream. The chassis design is finalized and a prototype of the Speed UTV is in the works. Speed UTV will be offering a completely customizable light bars for Speed UTV. The storage options for the bed of the Speed UTV are here. Robby Gordon also announced that a Speed UTV dealership is coming to Lake Havasu City, AZ by December 2020.

As the team at Speed UTV is finalizing the chassis, and getting ready to go into production in the coming months, there were a few small tweaks to the chassis. Again, in typical Robby Gordon fashion just more i’s getting dotted and t’s getting crossed.

The biggest changes made were to the tubes towards the front of the car, you can see the angles got better, and the chassis of the car is a lot more round.

The brakes that are used on the Speed UTV are the absolutely biggest brakes that could be fit inside the 15″ wheel, but if you’re planning on running a bigger wheel you’ll be able to relatively easily upgrade your breaks as well.

We haven’t heard yet for sure, but with the wide selection of aftermarket accessories already available, it’s safe to assume that in the future Speed UTV will be selling kits to upgrade to even bigger brakes.

Prototype build is in progress

Building a prototype for the team at Speed UTV is a walk in the park. This is what they live and breathe. In just two days they finished the roll cage, keep in mind in the images you’re seeing are of the unfinished version, but we got to see the finished roll cage on the live stream.

Once in production, the manufacturing facility is going to produce 40 cars, by December the production is going to be ramped up to 80, and the goal for 2021 is to build 120 cars a day.

You’ll be able to fully customize where you want the spot and flood lights placed in the Speed UTV Light Bar.

We got to see a completed cad of the drivetrain, the bluetooth axles have been replaced with the actual axles. But along with that we can see everything from the tires, wheels, shocks and sway bars.

The RG Edition graphics have been finalized for the Speed UTV. Below you can see the El Jefe and El Diablo renders of the cars with finalized RG Edition Graphics.

The doors on the Speed UTV will open just like in a normal car, the doors in the back are going to swing out towards the back and open to full 90 degrees.

There are plenty of seat options to keep everyone comfortable in the Speed UTV right from factory, check the seat options out in our April article. The seats are going to ride on rollers, and when it’s time to remove them Robby explained it’s going to be as simple as you can get, one pin per roller, and the seats come right out.

The bed on the Speed UTV is the cherry on an already adrenaline filled cake. Gone are the days of mounting a spare tire on a roof, or in a location where you shift earth’s gravitational pole when you take a corner.

The bed in the Speed is going to be able to support up to a 35″ spare tire.

From factory there will be several mounting options. Pictured below is a 32.5″ spare tire that comes on the Speed UTV. The storage containers can be used as a cooler, or just parts/tools storage.

The smaller containers are roughly 6″ wide by 9″ tall, and 35″ long. The bigger storage container that has a notch in it is roughly 15″ wide in the widest part, 9″ wide in the notch area, 9″ tall and roughly 35″ long.

Will you have front bumper options available?

There will be front and rear bumpers available. Speed UTV will do something that fits the body lines of the car. They will be available in the configurator soon.

Will the 300 HP speed key be race legal?

Will there be options for mounted lights on the cage?

Yes, there will be light bar brackets available.

How is the Speed UTV engine development coming along and has it been on the dyno?

The engine has been getting dyno time, we’ll get to hear more details on that soon. But the team at Speed UTV is putting the engine through the wringer. Essentially the engine is overbuilt, so that it can be tuned down and bulletproof while still holding 300HP.

Will there be different colors for wheels?

No, there will be aluminum and black to start with, down the road Speed UTV may offer custom wheel colors.

Can you remove the catalytic converter?

Things You Should Know

Stay up to date on our Speed UTV News Page, make sure you check out our Speed UTV article with all the details we’ve got. If you’ve got any questions, get a hold of Speed UTV on Facebook and Instagram to have your questions answered.