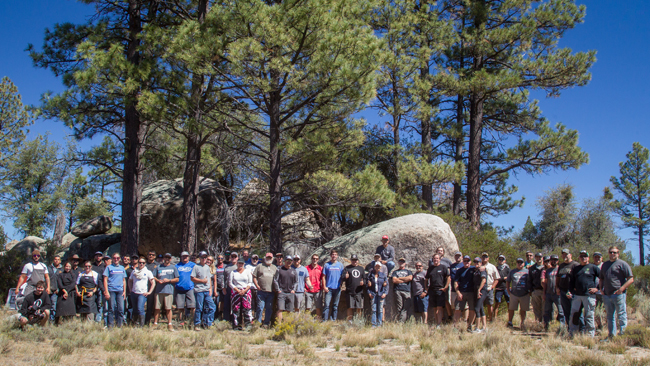 Pro snowboarder Travis Rice said in Art of Flight, “Experiencing the world through endless second hand information isn’t enough. If we want authenticity we have to initiate it.”

Occasionally, in any given circumstance, those moments are initiated with new people and they get to share the same stoke you repeatedly have. That moment is magical. It is what life’s all about. Experiencing the World and sharing things with new friends and the people you love is just as much fun as discovering its beauty and allure for the first time. Baja is one of those magical places enhanced by the fact that you have the freedom to travel off-road via trails and roads and find the true beauty and experiences that only come from getting off the beaten path.

This exactly why we started Legends Rally; To share our dream-like days of off-roading, eating, and drinking amongst the hidden spots in Baja with new people and to teach them about our culture, our racing heroes and our values but most importantly to show them how much fun you can have off-roading through the warm embrace of Baja.

For our first Legends Rally we took 40+ people on two full days of riding off-road in UTV’s just outside of Ensenada. The group varied from seasoned off-road racers, to off-road industry leaders, news outlets and media, to off-road newbies. The group arrived at beautiful Horsepower Ranch just outside Ensenada at our headquarters. If you are not familiar with Horsepower Ranch you should stop in and check it out. It’s not only safe and comfortable with friendly english speaking staff but the bar/restaurant is adorned with off-road racing paraphernalia celebrating our sports fifty years of racing history.

The Legends Rally had full support provided by Horsepower Adventures, including full chase support for any type of breakdown including flat tires and belt failures (Miraculously we had none!) as well as full medical support with two American EMT’s and medical evacuation services. Additionally, participants were able to rent custom built UTV’s. 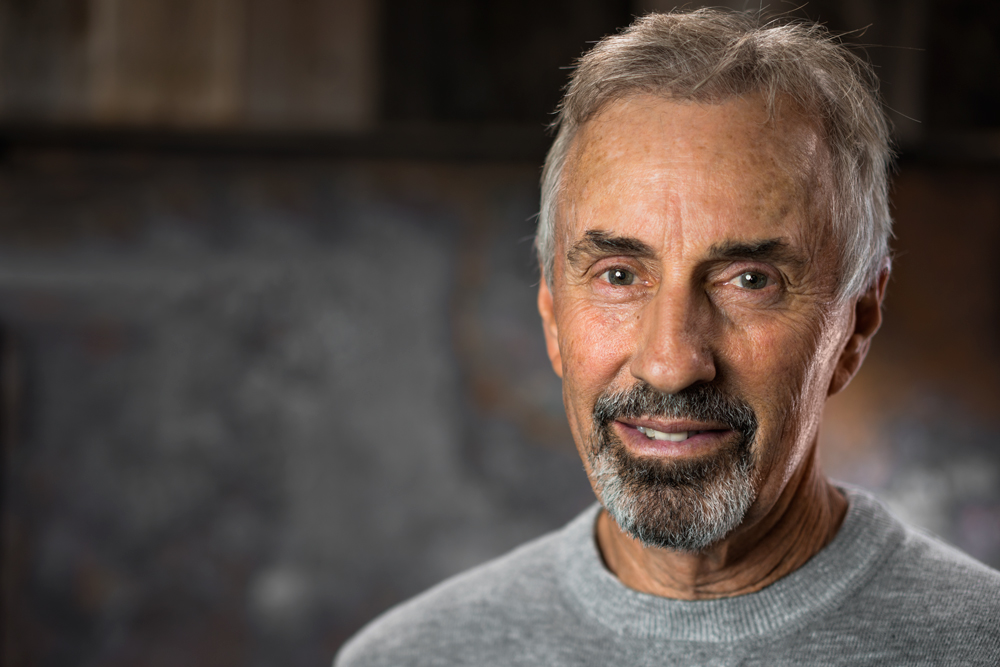 The Legends Rally is celebration of off-road culture and history. Our legend for this ride was recent Off-Road Motorsports Hall of Fame Inductee, “Lightning” Larry Ragland. No other professional off-road racer is more revered among their peers than Ragland. Humble and approachable, Ragland has more overall wins than any off-road racer in history. 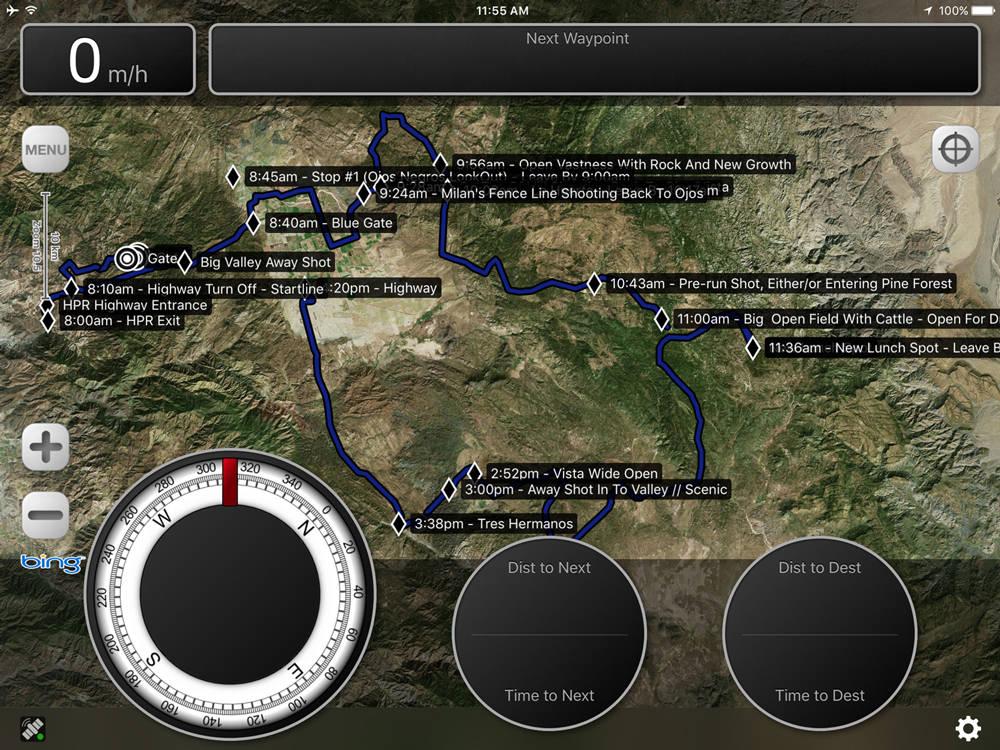 There is simply no other way to find the “good” stuff other than getting off-road. It really doesn’t matter what vehicle you use but the UTV platform is so affordable and approachable anybody can buy or rent one. They are super easy to drive and safer than street style off-road vehicles. You can run stock, but we recommended upgraded cages from our partner Cagewrx, upgraded seats and harness, tires, wheels and radios, which are critical when going out into the never never of Baja. GPS is also recommended and we are currently using the LeadNav system running on a IPad 4 in purpose built Mob Armor mount.

After meeting and escorting our guests on the American side through the border crossing at San Ysidro, we followed each other down the beautiful highway one toll road to Ensenada and made our way Horsepower Ranch just east of downtown Ensenada. As guests began to arrive, they were greeted with a cold beer and a smile as they registered. After the guests settled in dropping luggage and unloading cars, we lined up all 26 UTV’s in front of Horsepower Ranch. The 26 UTV’s including a variety of Polaris RZR’s, custom Horsepower Adventure Polaris Rentals and two bone stock Kawasaki Teryx’s. 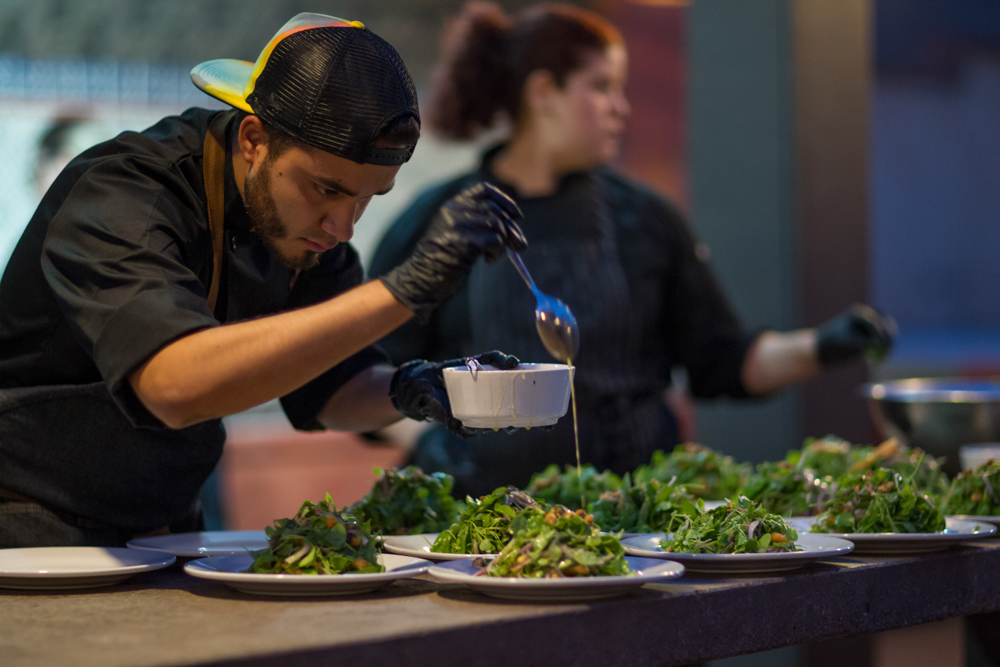 After a quick welcoming introduction and driver orientation, we sat down for a phenomenal meal on the outside patio near the pool. Dinner on Friday night was Grilled Hangar Steak, Farm Vegetable Lasagna with Lamb Bolognese Arugula Salad with Figs, Ratatouille and topped off with Pineapple Caramel Cake with Allspice Cream prepared by Claudette Wilkins and crew. The menu was created by Drew Deckman of Deckman’s en el Mogor. 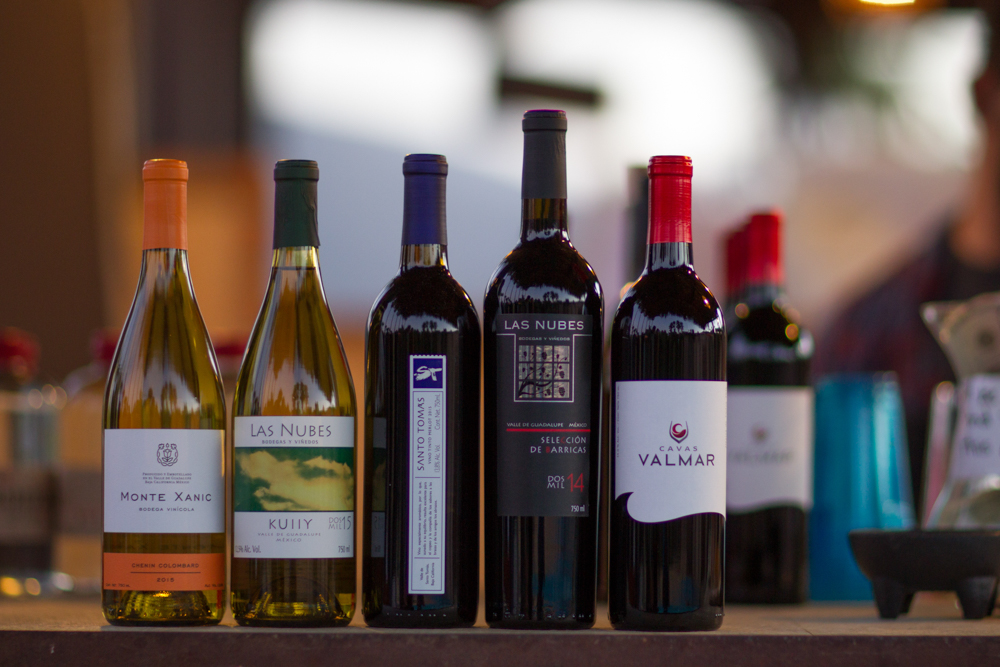 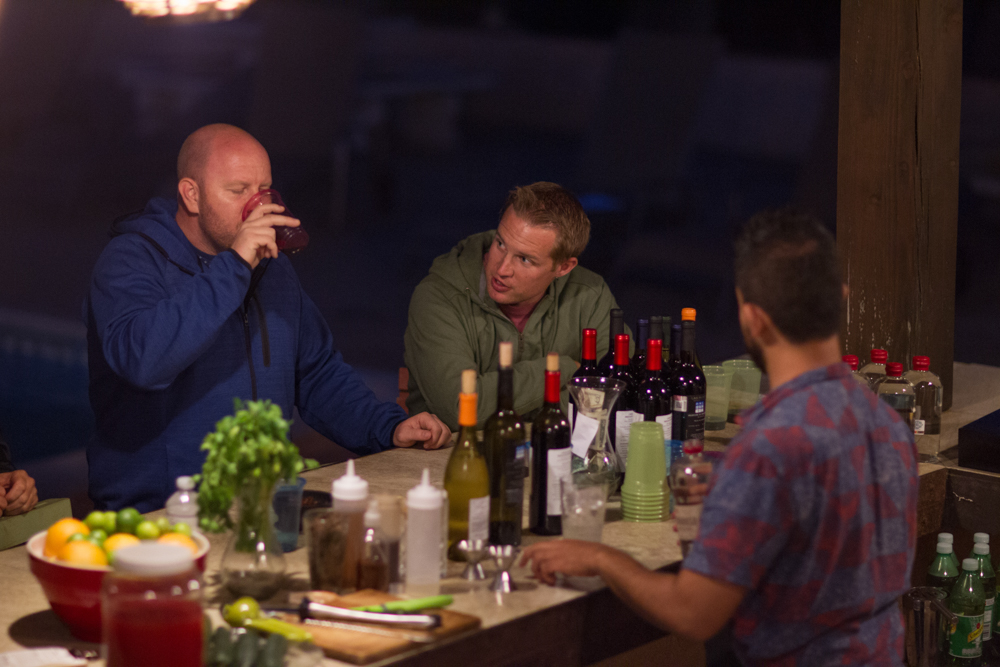 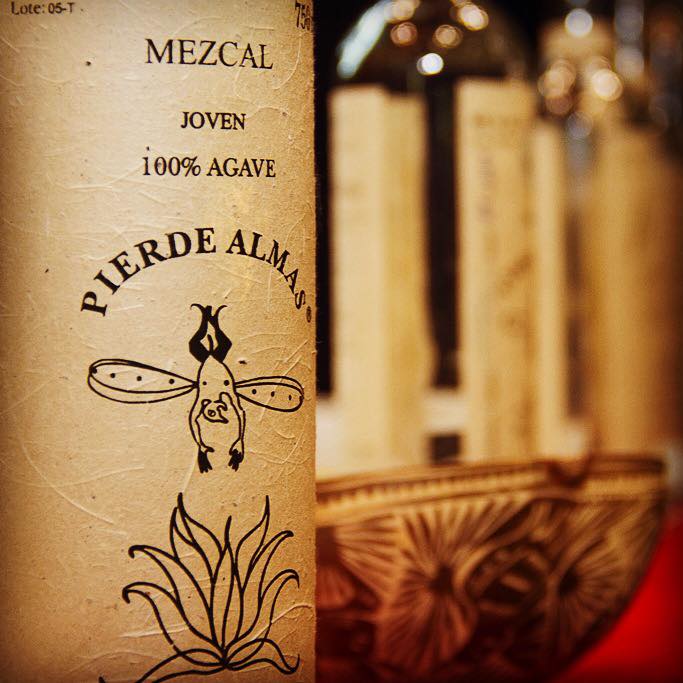 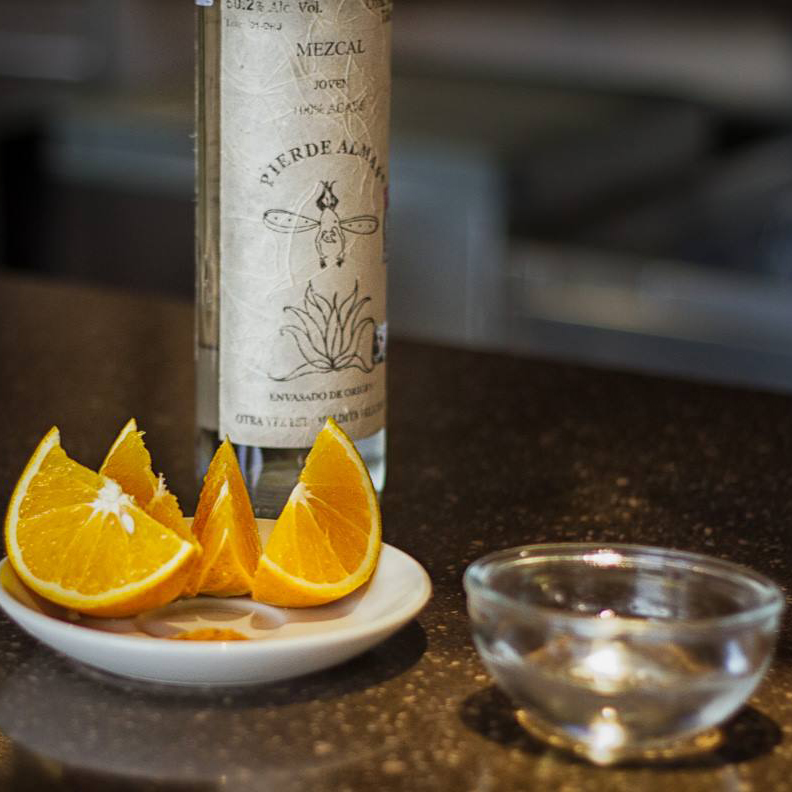 Perceived as some harsh homemade hooch with a worm in the bottom of the bottle, Mezcal has had a bad reputation with Americans for decades but this complex and diverse spirit has more range and depth than Tequila. With over 30 types of agaves, nine thousand producers and far less restrictions than Tequila, the variations of Mezcal are endless. Just like Tequila you can drink it straight, one the rocks, or mixed into a drink.

Our mixologist Irving Gonzales also brought some Chapulines or (toasted grasshoppers) for everyone to try. Widely consumed in Mexico and Southern parts of Asia as a favorite snack, Chapulines are roasted with garlic, lime juice and salt containing extract of agave worms, lending a sour-spicy-salty taste to the finished product perfect to pair with smoky flavor of Mezcal. Chapulines derived from the Mayan civilization where they were used as high protein snacks for “runners” who ran from town to town to deliver a messages. 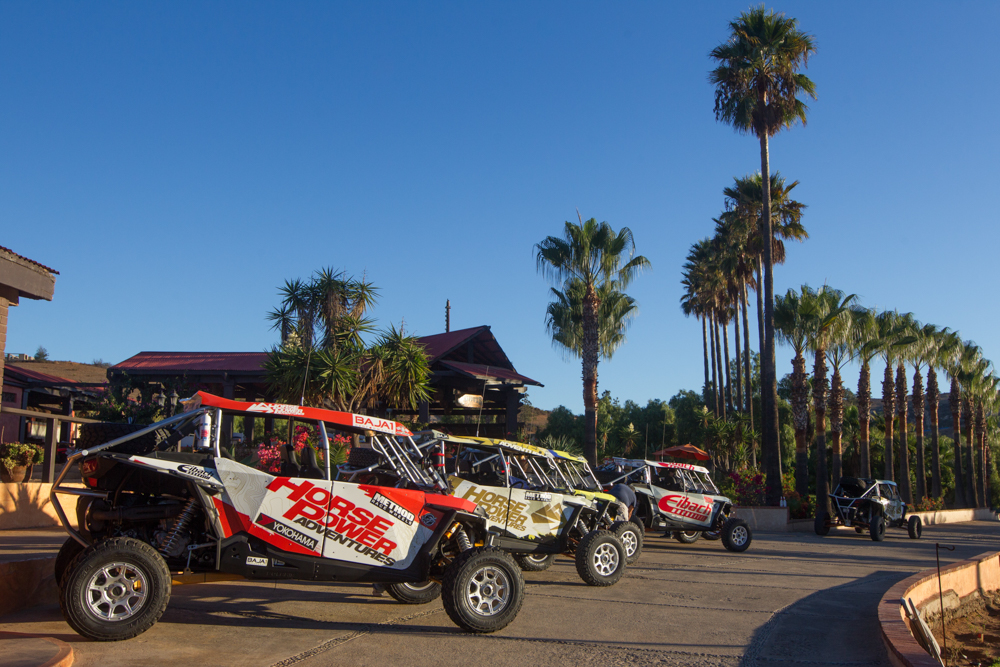 Saturday started at 6:30am with Black Rock (Oceanside) coffee we lovingly refer to as “The Black Crack”. The nickname says it all. Breakfast was Tortilla Espanola with Wood grilled French Toast and Fruit platters. After breakfast, we loaded up and launched from Horsepower Ranch at 8am covering varied terrain through the rolling hills outside of Ensenada to our first stop at Ojos Negros. We briefly stopped to explain some of the interesting history of this beautiful valley. 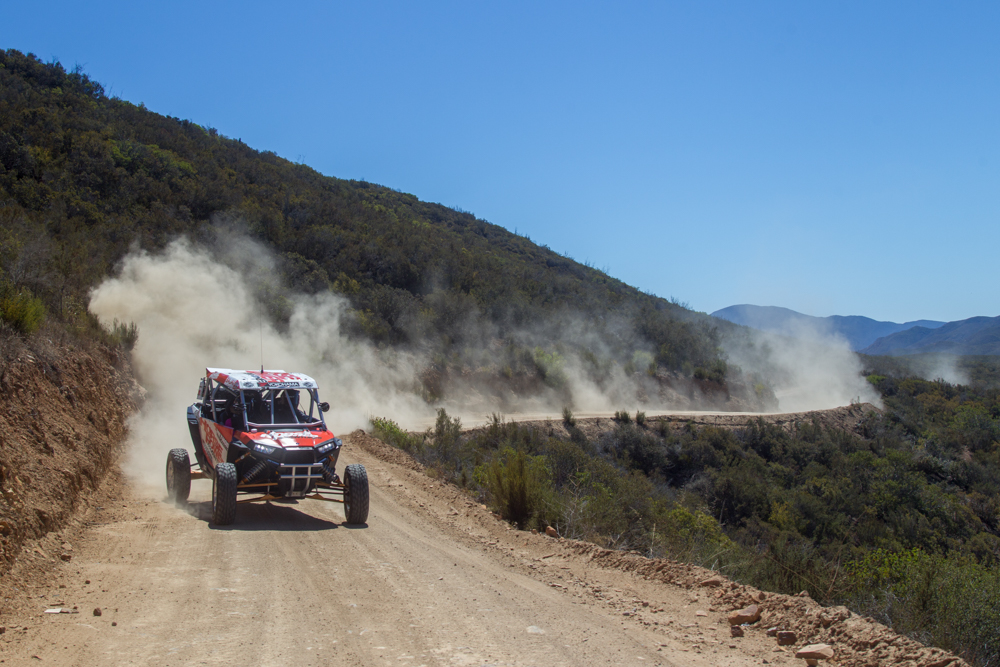 Ojos Negros is an agricultural valley producing some of best wines, produce and cheese in all of Mexico. Some of the vegetables that we eat everyday are from this valley. The valleys name means “Black Eyes” named after two marshes that looked like eyes that have since dried up. The other story is that the name came from the eyes of a beautiful Kumeyaay Indian woman.

Tour Baja with the people that know and love it! Fantastic weekend for all of us. #legendsrally #bfgtires #baja #offroad #outdoors #adventure #fun #horsepowerranch #newfriends #offroading #polarisrzr #utvunderground

The area was formerly called Real del Castillo and was founded as a gold mining town in the late 1800’s. In fact for a time it was the capital of Baja because of all the gold mining activity. Somewhere in this valley there is an old trail that connects north to Tijuana and then to San Diego created to transport gold back to the United States. 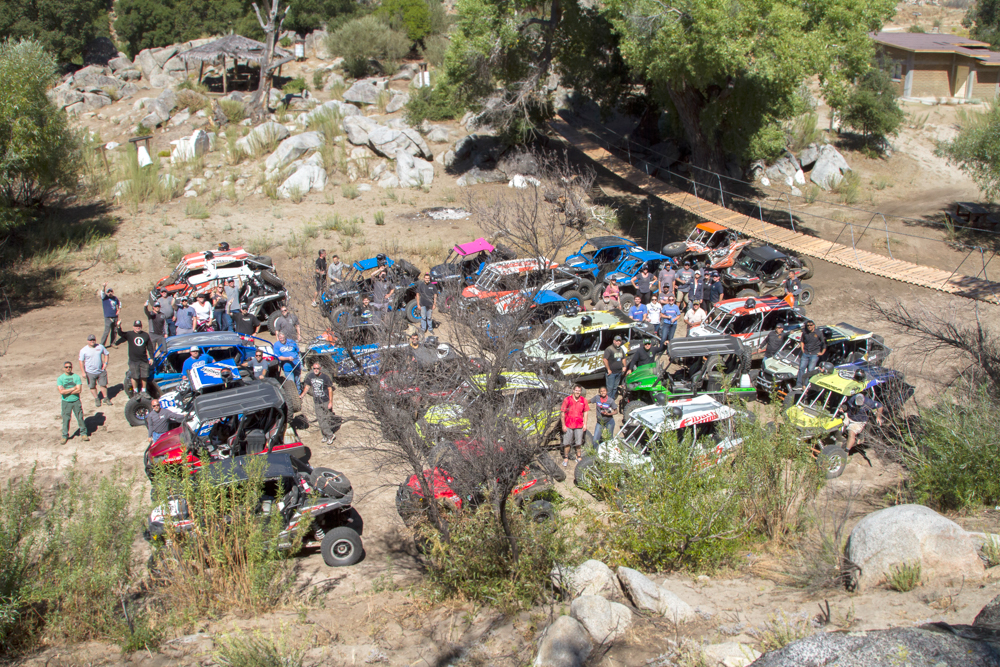 From there we headed East across the top of the valley on graded farm roads towards El Compadre Trail, where the course got a bit rough and technical. Our next stop was “La Huerta” an old Kumeyaay Indian campground that has been turned into a camp for locals and tourist. The Kumeyaay Indians have lived in this area for thousands of years existing on indigenous plants and animals. Acorns were a major staple of their diet. The drawbridge pictured above was created to cross when the wash was filled with water during rains that created a riverbed. 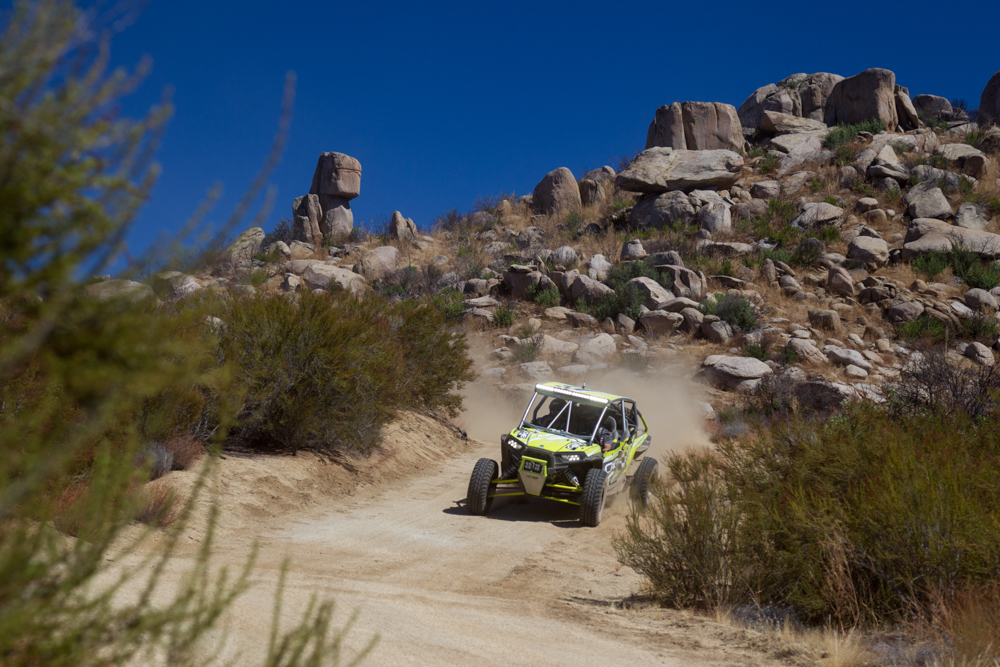 After the brief stop we started heading North. The pine forest or Bosque de Pinos is a federally protected preserve named The “Constitution 1857 National Park”. The mountain range we are in is the Sierra de Juárez mountain range that extends all the up to Tecate and is prized for its stunning beauty and multiple lakes. Pretty much only off-roaders and ranchers ever go through this stunning mountain range. We stopped here for lunch on a beautiful private ranch. 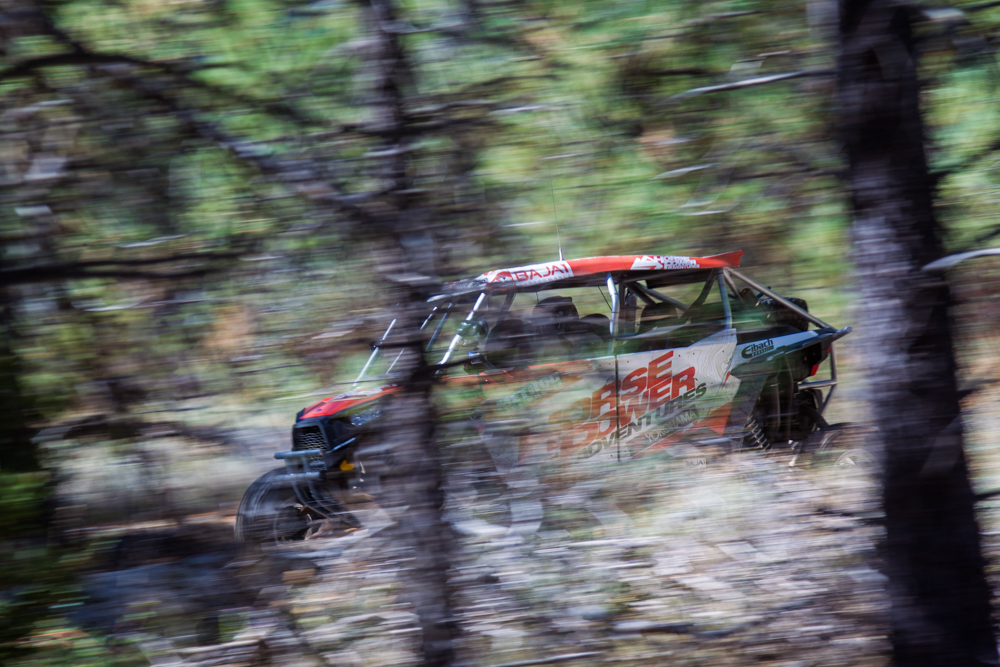 We sat down under canopies on white linen and had lunch prepared by Drew Deckman associate Chef Claudette Wilkens. The lunch started with Oysters with Mignonette appetizers sourced locally in Ensenada. Our lunch was a Pine Forest taco bar with pork shoulder tacos and all the fixins, cucumber-tomato salad with citrus vinaigrette, and a big ass cookie warmed over a fire of mesquite. 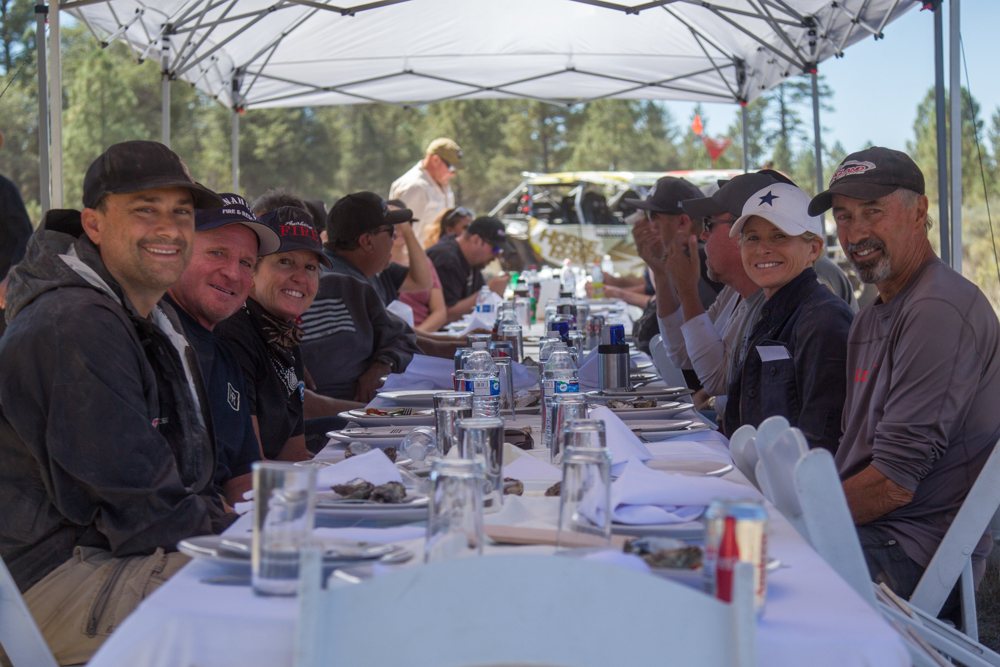 After an hour and half lunch and rest, we loaded back into our UTV’s and headed south back towards Ojos Negros until we came to Highway 3. As we headed out of the pine forest, the windy sand smoothed forest roads gave way to more technical roads with small rises and high brush on both sides occasionally opening up. As we crossed the highway and went back onto dirt at K77, the freshly graded course (Yes, there’s grading in Baja too) ran for 15 miles or so and quickly turned into to rocky whoops, sand washes and the rougher terrain Baja is known for. 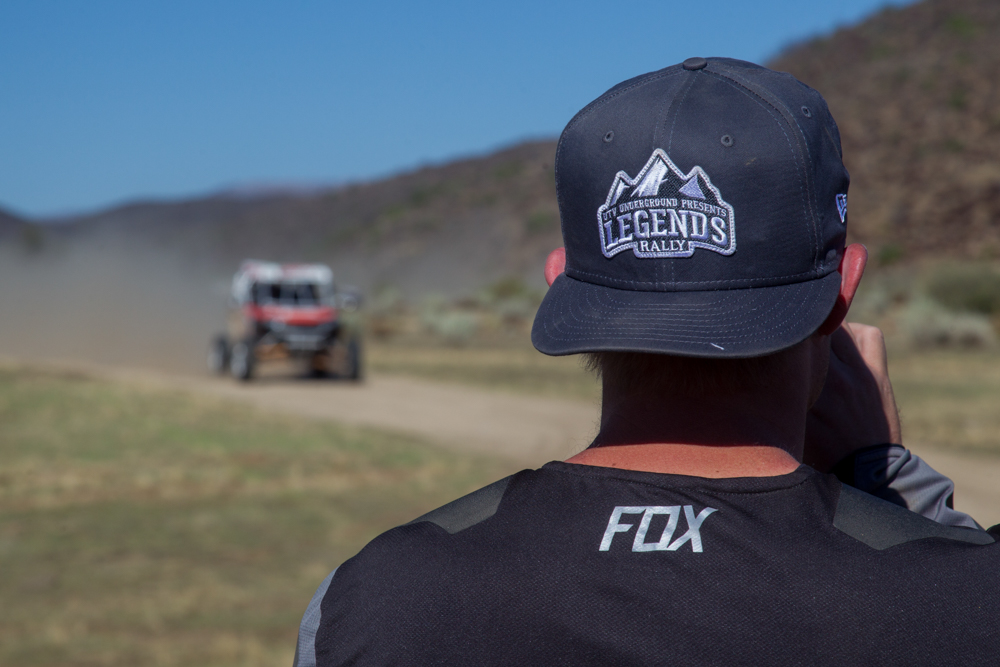 We stopped near Tres Hermanos in a large open field and took in the beauty of Baja for a few minutes. This area is called Ejido Héroes de Baja where they have been farming cattle since the 1800’s.  Throughout the ride we had been handed out playing cards sealed in an envelope for a poker run with prizes including:

The riding from Tres Hermanos to Ojos is one of my favorite sections with fast flowing medium rough roads mixing turns and small elevation changes which makes for a perfect Baja race track. We hit the road crossing at Ojos slowed down to cut through the edge of town and went out back through the blue gate 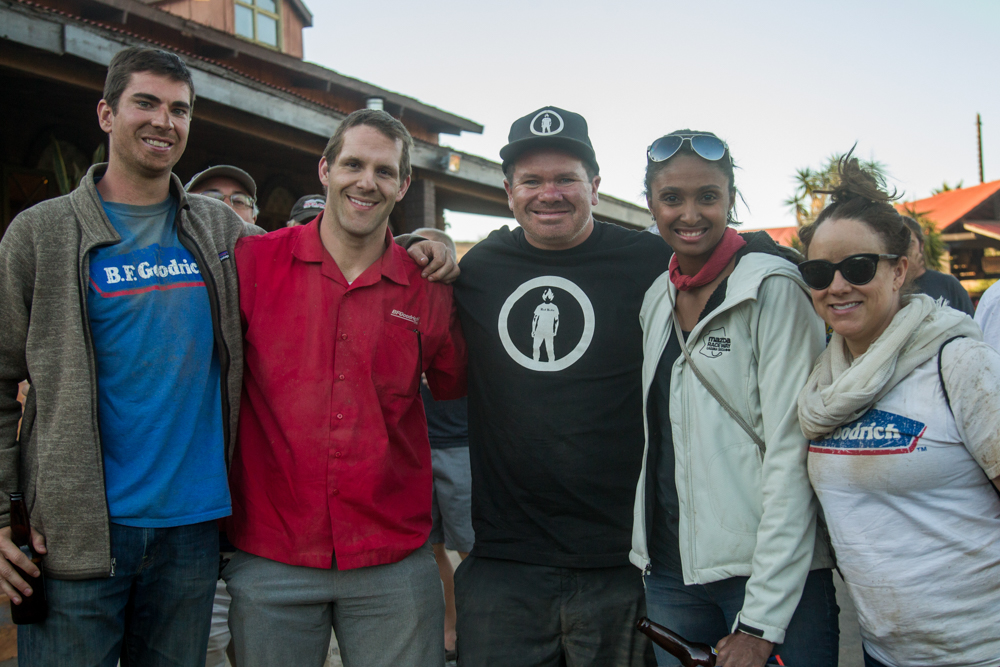 Now that everybody had been introduced to Mezcal the night before, they were much more ambitious with trying out the different mixed drinks as well as straight shots of Mezcal traditionally served with an orange slice and sal de gusano (salt of the worm) that is actually made up from ground up dried worms and various spices. 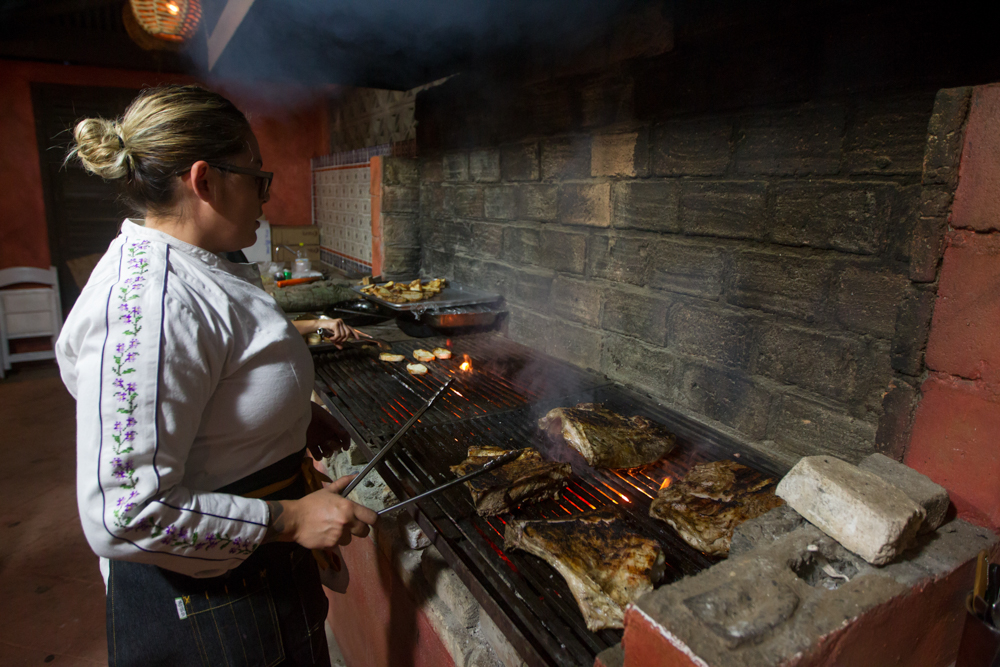 After a long day of riding everybody was starving and jumped right into the dinner that consisted of a 3 bean salad with chorizo, potatoes al ajillo, pulled pork shoulder, roasted mogor lamb, ensalada mixed greens, local Baja cheese, quince ate, grape flatbread on grill and marinated berries with cocoa crumble.

After dinner FUNKiachi showed up and kicked it up a few notches. The partying went on into the wee hours of the night with many more shots of Mezcal, beer and wine in the bar at the ranch affectionately known as “Clements Carrera Cantina” named after horsepower ranch’s founder Todd Clement. It’s easy get caught into the time warp of having fun at the ranch when you are surrounded by friends and drinks! The next days ride was a smaller loop so start time was 11:30 which allowed everybody to sleep in a bit.

Check back for Day 2 of Legends Rally!