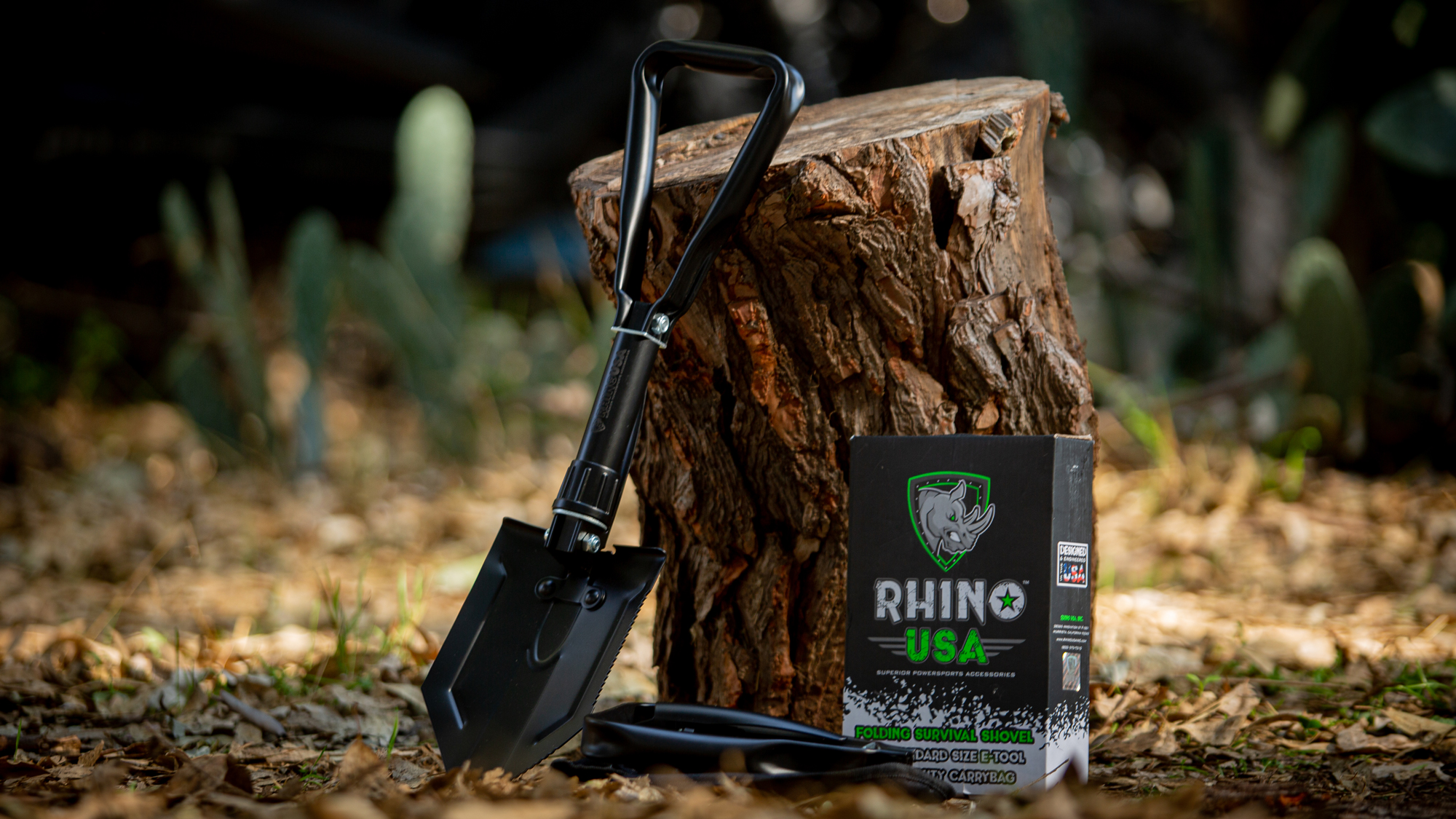 The quick hit: The Rhino USA Folding Survival Shovel is one of those “must-have” items for your car, truck, or SUV no matter what you drive or where you live. It will save you time and money when you get stuck in the mud, sand, or snow. Put one in each vehicle you own with your jack and spare tire kit.

The folding shovel, or “entrenching tool” goes all the way back to 1943 and World War II. They were designed to be easily carried as part of an infantry soldier’s standard pack equipment. Back then, they were also considered ancillary weapons, because their sharp, thick edges were strong enough to cut through flesh and bone. Entrenchment tools were used in close quarters combat between German and Soviet forces, notably in the brutal hand-to-hand fighting during the Battle of Stalingrad. The US Army has made some significant updates to their standard-issue tri-fold design, but leave it to the guys at Rhino USA to make the lightest and strongest Folding Survival Shovel with Pick that we’ve ever seen, and it’s the one everyone should be carrying in their car, truck, SUV, UTV, even your RV.

The fact is – you don’t need a shovel often enough to carry a full-size Home Depot shovel around with you 24/ in your car. BUT – there is inevitably going to be that day when you drop a tire in the mud, sand, or snow and are by yourself and can’t get unstuck. No one to tow you out – cell coverage is spotty, OR you simply don’t want to pay a tow truck $150 to come to rescue you. The Rhino USA Folding Survival Shovel is a simple and easy solution. Instead of getting on your hands and knees and digging out your tires by hand, simply slide the Rhino Folding Shovel out of its soft case, and in seconds you have the right tool for the job. Dealing with thick ice or snow? No problem. With a flick of the wrist, you can reconfigure the shovel into a pickaxe. It’s really ridiculous that every vehicle in America doesn’t come with a folding shovel in the spare tire and jack storage area. This is such an important and easy to carry tool.

We were out in Ocotillo recently doing some filming and one of our support vehicles was a 2WD Tacoma. We inevitably got it stuck but half of our crew was out of radio range. Luckily we had a Rhino USA Folding Shovel with us and all it took was two minutes to dig out one tire and part of the frame rail and we were back in business. We didn’t need a tow, or anything fancy, just a shovel.

The Rhino USA Folding Survival shovel is a full 23-inches long when extended but folds up nicely into a 9-inch by 6-inch padded bag when not being used. Its heavy-duty carbon steel is perfect for the car, camping, and backpacking, or even gardening and the beach! Do yourself a favor and head over to rhinousainc.com and pick up a Folding Survival Shovel for each of your vehicles. They have a lifetime warranty and are made by an American, family-owned and operated business. Shipping is lightning fast too! See you guys out on the trail!