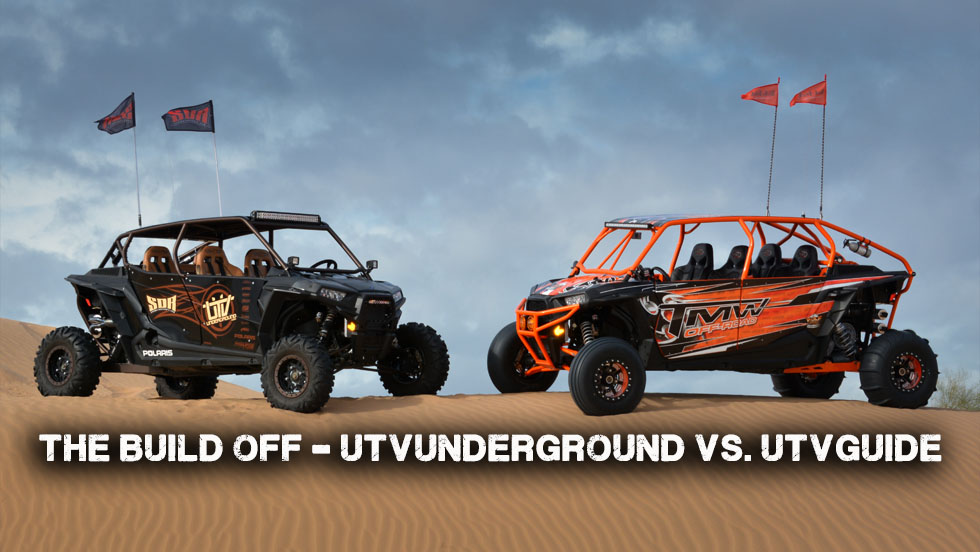 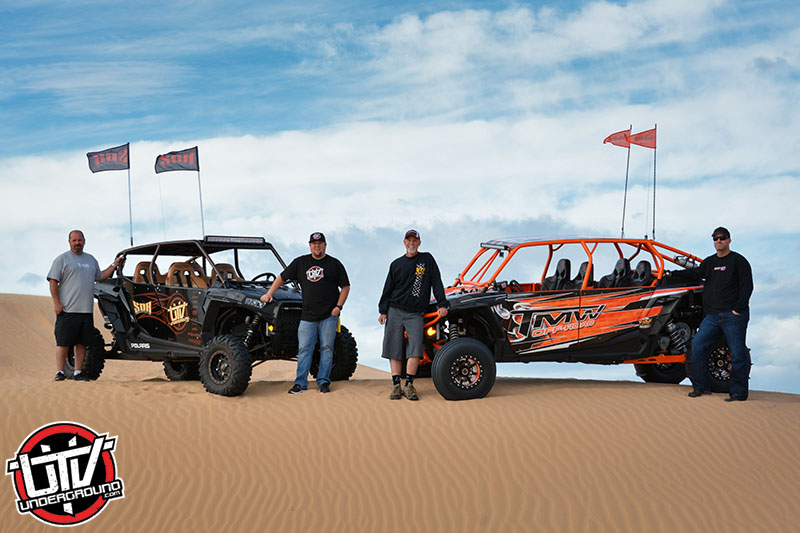 A few months back Jon Crowley of UTVGuide.Net proposed an idea to us of doing a build-off. Since we both were in process of building up our new 2014 Polaris RZR Xp1000 4 seat machines we thought it would be cool to go head to head using as many different companies as possible and just show the limitless mods you could do to these amazing UTVs. Jon is a good friend of ours, he’s a long time member of UTVUnderground.com and despite owning his own UTV based media site, we still work closely together and have for many years now. Jon, or “Crowdog” as he is known on the forum, has been a huge part of the success of UTVUnderground.com giving us a lot of our first opportunities in the industry. For that we have and always will be grateful.

This isn’t the first time we have partnered on a big content piece before. Back in 2011 we did the UTV Of The Year contest & award which was a huge hit. Now that I think about it, we should probably bring that back! For this competition we decided to go head to head. Both UTVUnderground.com and UTVGuide.net are recognized for the stable of modified UTVs we keep. We both try to help set trends and expose all of the latest and greatest offerings the industry has out. We figured now would be the time to put our heads together with separate builders and see what we could come up with. Once complete we would show them off and let the people decide what and which they liked better. We didn’t want to make this a full tilt OCC vs. PJD build off, but more of a show off you could say. In the end, with help from SDR Motorsports on our end and TMW on UTVGuide’s, we came up with 2 very cool builds that we now finally want to show off! 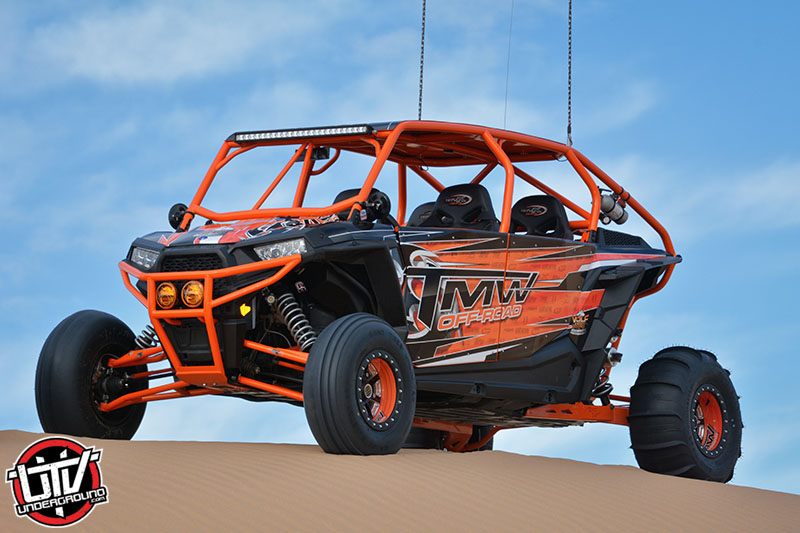 Jon is a much more technical guy then I am. He loves the little gadgets and is always tweaking with the little details. We like the details too, don’t get me wrong, but we also like to keep things very simplistic for the most part where Jon is not afraid to take on the more challenging and time consuming modifications. For Jon’s build he went with TMW Off-Road as his build partner. TMW has been around for a while now and specializes in bolt on accessories as well as full turn key builds. TMW has come on strong in the past 2 years with the introduction of the Polaris XP900 and now Xp1000. They showed what they were capable of on UTVGuide’s RZR XP1K-4 and when they rolled up to Glamis we knew they came with it!

The first thing that stands out to me is the bright orange cage. We aren’t one for big bright colors, I think our builds show that, but many are and so we certainly don’t knock it. On top of that it POPS for photos and looks great when charging through the dunes. Like all custom builders, TMW has a style and their style screams performance. Their cars look fast when they are just sitting there and this car is no exception. The cage includes opening doors that have the front doors opening in a traditional fashion while the rears open in a suicide fashion. Its different and cool and really allows the interior of the car to be shown off! Tying the vibrant orange cage together was a slick set of graphics from Wolf  Designs which included a full vehicle vinyl wrap. They even did a graphic inlay on the offset of the HiPer bead-lock wheels that includes the TMW Off-Road logo. Keeping in line with the orange theme are the custom Triple-X Seats. These seats not only look good but are really comfortable. We had never used Triple-X before but seeing these we would certainly consider them for our own future builds.

Each build has its highlight feature and for the UTVGuide.net XP1000-4 its certainly the shock package. Jon and TMW hooked up with the guys from JRI Shocks who dialed in their RZR with the very first set of fully adjustable electronic coil-overs. We launched these shocks back in 2013 during the SEMA show and knew then that they would certainly push the progression of shock tuning forward. With these shocks Jon can tune the suspension on the fly with the simple push of a button. The steering column mounted shock gauge allows the valving to be changed between each shock individually or as a pairs or all 4 at a time. Should Jon choose too, he can also adjust the shocks by using the JRI phone app! Its amazing technology and Jon is the first guy to get to play with it in a RZR. Only time will tell how well these shocks will hold up and at $6500 a set they aren’t for the thrifty aftermarket consumer. But without a doubt, this set up is trick so we give it up to UTVGuide & TMW for making this addition to their machine!

Overall we really dug their machine and think that it definitely holds up against what we brought to the table! 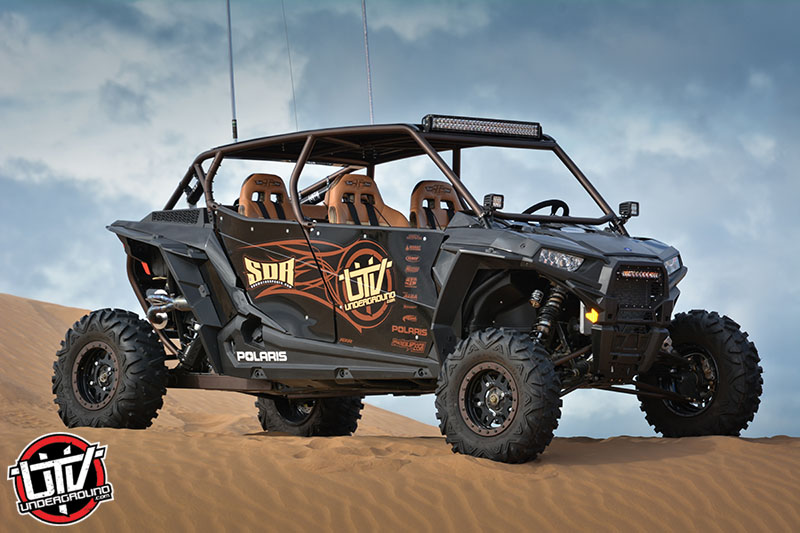 This isn’t the first time UTVUnderground.com and SDR Motorsports out of Riverside, CA have teamed up on a build before. We first set the industry on fire with the build of our 2013 Polaris RZR XP900 Jagged-X Edition known simply as BLACK MAMBA! From there we have brainstormed over and over on what our next build would be and now we are excited to finally share what the past few months of spitballing ideas has turned into.

The first thing we usually do is try to set a theme or color scheme. This for us is a big deal as I think people always expect UTVUnderground to come with something new. So I pondered for many days on what to do and finally it came to me that I wanted to do something inspired by the King Ranch edition Ford trucks. Something that looked high end, luxurious but still was tough. Once that theme was determined Tim at SDR got right to work and found this amazing bronze metallic powder coat color. From there we ran with it. The cage design SDR came up with was new, and while it still resembles an SDR build, it had new features that had never before been seen or done. I like the low chopped look. We always try to get the cages low and sleek looking and this one is no different. While adults could still sit in the back, I build the back seats for my kids, or hot looking chicks (just kidding honey!) lol

The top of the front windshield bar is radius’d perfectly with our 30″ RDS (radius) Series light bar from Rigid Industries. The top rear windshield bar is also radius’d the same and houses a custom rear amber, brake, back up light set up. The bed of the RZR is completely enclosed with a rear aluminum trunk that ties into a class-1 inspired rear bumper section. Combine in the bat wing style suicide doors and multi-bead rolled designed roof panels and you have one very detailed cage. We couldn’t be more pleased with the look of this cage, the profile it has, the trick formed radius light mounts and the full aluminum bed & bumper.

For me the one detail that really sets our car a part is the color scheme. Its rich, dark and different. Its unlike any UTV we have built or seen built yet its that scheme that has people saying “why didn’t I think of that?”. But what ties it all together is the seats. The seats truly made this car, and its not as much the design as it was the materials that really made them truly unique. This is the first time we had ever used Twisted Stitch and they crushed it. Using a material they call Saddle Tan and tying in the rich chocolate leather and their custom stitching, these seats scream luxury car. The front buckets are some of the most comfortable seats I have ever sat in, and as a big guy I have experienced seats that look really good but don’t always add to the comfort or driving experience. These do both! The rear seats were replaced with a matching custom bench seat that allows for all 3 of my little ones to sit comfortably.

There is so much to this build from the seats to cage, custom aluminum to the fiberglass dash by GlazzKraft. The custom UTVUnderground.com Edition Muzzys exhaust can’t be overlooked and neither can the custom tuned 2.5″ at all 4 corners Walker Evans Racing Shocks. Its hard to think that this is only phase 1 of our build! Thats right, we aren’t done! While the bulk of the heavy lifting is done, we still got more to do so stay tuned as we update and continue our build of this one of a kind machine!

Oh yeah, and we drove these show quality builds and guess what? They fricken drive like they look! They aren’t just trailer queens, these beasts will get driven and driven hard! 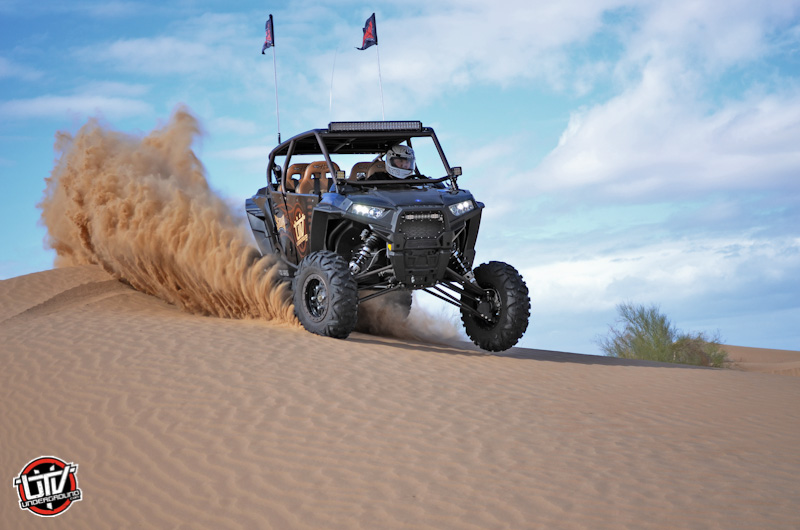 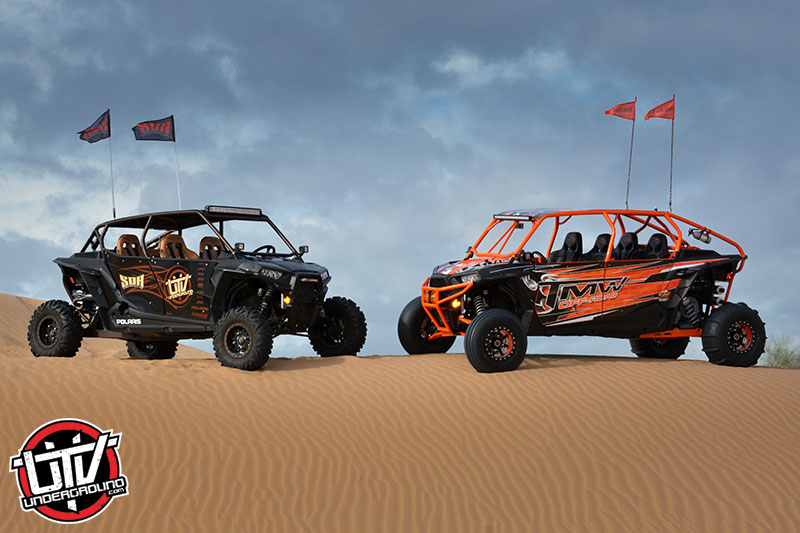 Both Jon Crowley and I want to thank Polaris for their support in helping us to build these amazing machines. From there we would also like to give a huge thanks to SDR Motorsports and TMW Off-Road for not only building us 2 extremely top notch machines but also delivering them on time and ready to run! And without a doubt we want to thank each and every sponsor and contributor who helped us turn these stock RZRs into 2 of the coolest builds in the industry! We hope we did you all justice!

As previously mentioned, this is only the beginning for our build and you know that once its done you will get even more details, photos and even an awesome Mad Media produced UTVUnderground BREAKDOWN video so stay tuned!!