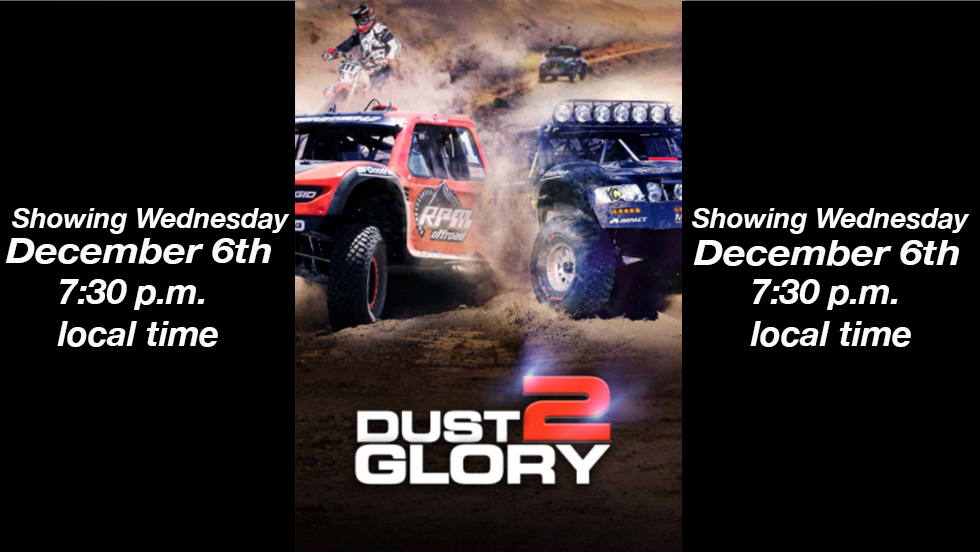 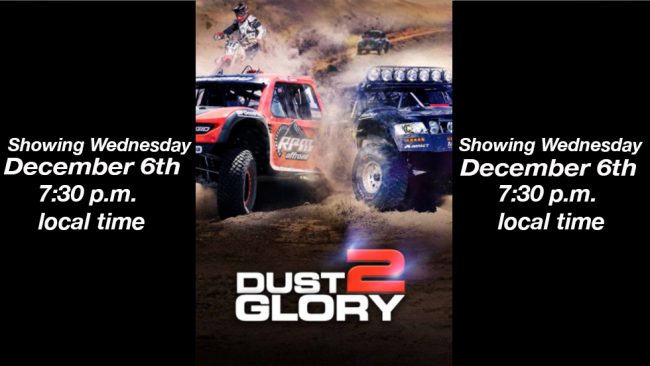 ENSENADA, Baja California, Mexico — Tickets are still available for next Wednesday’s one-night premiere of Dana Brown’s long-awaited ‘Dust 2 Glory,’ the dynamic motorsports action documentary that was over 18 months in the making. ‘Dust 2 Glory’ was produced by BCII in association with SCORE International, the World’s Foremost Desert Racing Organization, and Dana Brown Films. BCII’s Bud Brutsman is executive producer. Filmed entirely in Mexico’s mysterious Baja California peninsula, ‘Dust 2 Glory’ has chronicled each of the four races in the 2016 SCORE World Desert Championship as well as the 2015 SCORE Baja 1000.

DUSTY TRAIL
‘Dust 2 Glory,’ which began filming at the 2015 SCORE Baja 1000, continued up close and personal coverage capturing the robust racers in their amazing adventures in Mexico’s majestic Baja California peninsula through all four spectacular races on the 2016 SCORE World Desert Championship schedule.
The documentary captures the spirit of SCORE Baja racing through many of the courageous competitors all on the colorful backdrop of Mexico’s magnificent, majestic Baja California peninsula.

SCORE COMMENTS
“SCORE is extremely enthusiastic regarding the release of this epic production chronicling the daring exploits of the courageous competitors amidst the background of Mexico’s stirring Baja California peninsula,” commented Roger Norman, SCORE CEO/president who himself is a former overall winner of the legendary SCORE Baja 1000. “‘Dust 2 Glory’ tells the complete story of the SCORE World Desert Championship. Dana Brown and Bud Brutsman have weaved together a tantalizing tapestry of the intense racing, committed families, extraordinary race vehicles and the wonderful people of Baja.” “The movie showcases what the SCORE World Desert Championship is all about, unlike any other form of racing in the world. Audiences will be stunned, exhilarated, literally left speechless and most of all–delightfully entertained.” For more information regarding SCORE, visit the official website of the SCORE World Desert Championship at www.SCOREInternational.com.