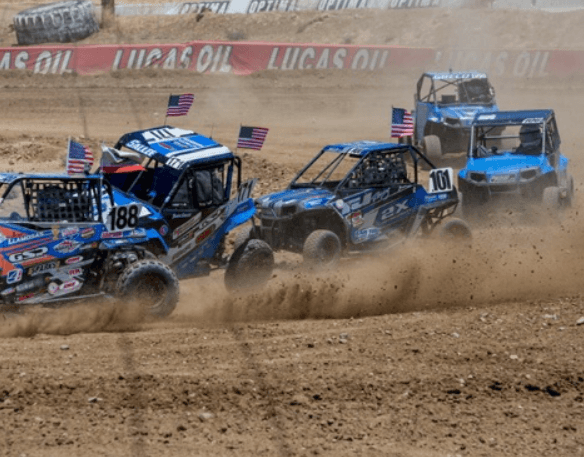 It was a cool Saturday morning, I was headed to qualifying after a full day of practice. The Micro Punisher was ready to battle. I lined up ready to take over the track at the Victorville Fair Grounds. As the green flag dropped I pressed my foot on the gas and began to assume time on the other cars. Coming out of the first lap into turn 2 I would have a parts failure that would put starting dead last of 14 other drivers. Frustrated I knew I would have my work cut out for me.

No one ever wants to be on the hook headed back to their pit, As I sat and was towed back, I knew that I was going to have to make my driving this race really count, I would head to the track to watch the rest of the qualifying rounds so that I could study them, go back get in my car and sit at the staging area thinking and applying what I learned.

We rolled out to the track I could still the National Anthem in the stands, inspiring. As we paced behind the cars and I sat on the 7th row, I planned my means of attack. When the green flag dropped I would swiftly pick up 6 position in the first lap, I would continue to move forward picking them off one at a time. The track would be met with some full course yellows but I would continue to make progress, all the way to 4th position. I wanted that podium but it felt good to make progress, I thought to myself tomorrow, I will hold myself to a standard tomorrow.

Sunday would come quickly, smell of fresh bacon and I was up and headed to the drivers meeting. I sat in the stands and listened to Lee discuss important topics but could only really see the 1 in the back ground. That was my target.

I would head out to the qualifying staging area, Brian weighed my car and did some measuring, I sat once again at the staging area just thinking about my plan of attack. I wanted the pole, badly. As we rolled out to the green flag I would distance myself from other drivers leaving a gap to build my momentum. I would qualify 2nd, 5-10ths of a second behind the leader. The inversion put us on me on the 3rd row, work to do.

Once again I watched the last qualifying rounds of the day, hydrated and headed back to the pit where I would jump in my car and head to the staging area. We paraded out and the only thing I could see hitting the podium. As the green flag dropped I would begin to speed into the 3rd spot headed for the front of the pack, I would eventually assume the lead and be there until the competition yellow. As the race began again, I would continue to hold 1st place until I biked it coming in to a hairpin turn with 2 laps to go. As I straightened myself out I found myself in 2nd place and saw a lapper that we were coming up on, I held my line and was able to slide around the outside putting myself with a huge lead over the other drivers who were shuffling through the last lap, as I headed to the final turn, I saw the Checkers!! And I knew that Victory was mine.

I would like to thank all my sponsors for your continued support. I couldn’t and would not be this successful without you, and your brands. Next stop Lucas Oil Regional series Glen Helen July 13, 2019, we could be debuting our new 570 Machine. Until then, Race Safe, Play Safe.

Words and Photos by Travis Sallee. 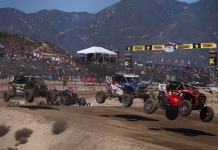