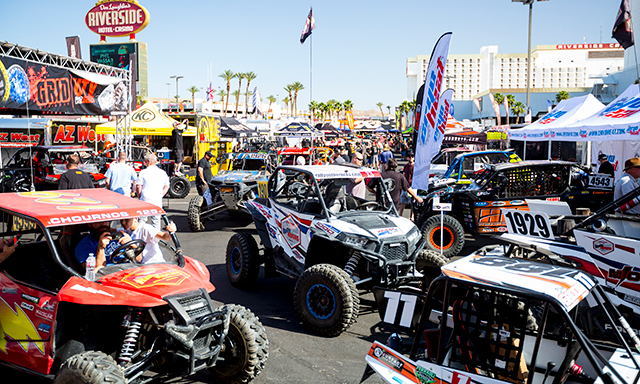 Nearly 300 UTVs, racers, fans, and vendors converged outside the Riverside Casino for the 2017 Polaris RZR UTV World Championship powered by Monster Energy Contingency Day Friday. The event was run as part of tech day for Saturday’s desert and short course races, which are part of the Best in the Desert Series.

Primary sponsors Polaris and Monster Energy, as well as UTV Underground organized the event, which featured a huge vendor midway, tons of swag and giveaways, a raffle, a poker run and even an Easter egg hunt. The event had a huge turnout of fans, racers and off-road enthusiasts. 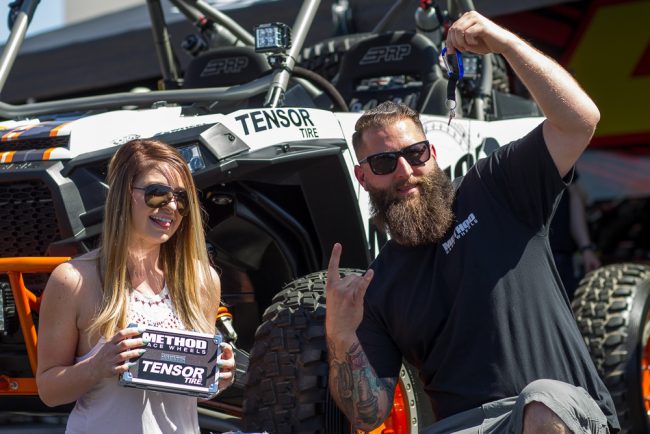 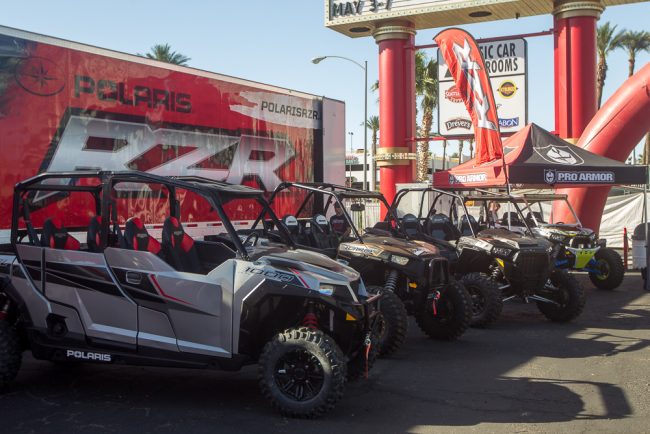 “We sell Polaris in the Bay Area, so it’s nice to have a RZR with this capability in the stable,” said Zeidler. “We’re going to do something really cool with it. I couldn’t be more excited about having 4 Wheel Parts and UTV Underground involved in the sport. They’re doing things that keep making the sport better and better.” 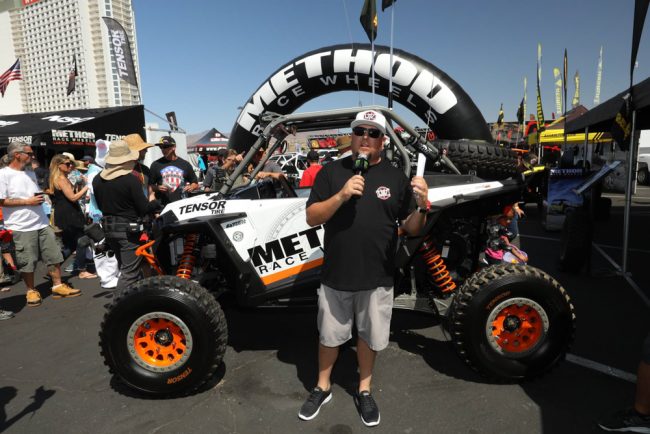 “Joey D” DiGiovanni, CEO and founder of UTV Underground will also be giving away five Polaris RZRs to winners of Saturday’s races. The five classes are: Turbo Class Desert, 1000 Class Desert, Overall Short Course, as well as Youth 170 and Unlimited 250. 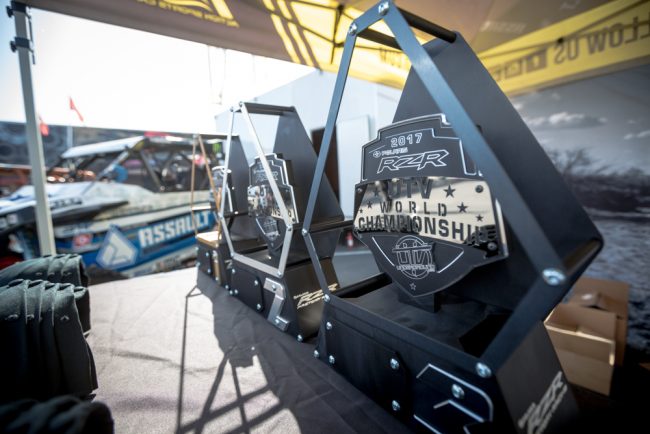 Speaking of winners, the organizers unveiled the trophies for the event here. UTV performance parts manufacturer Assault Industries was tapped to create the trophies for the desert races. The 35-year-old company is known for its mirrors, radius rods and tie rods, as well as a full selection of well-engineered and fabricated parts. 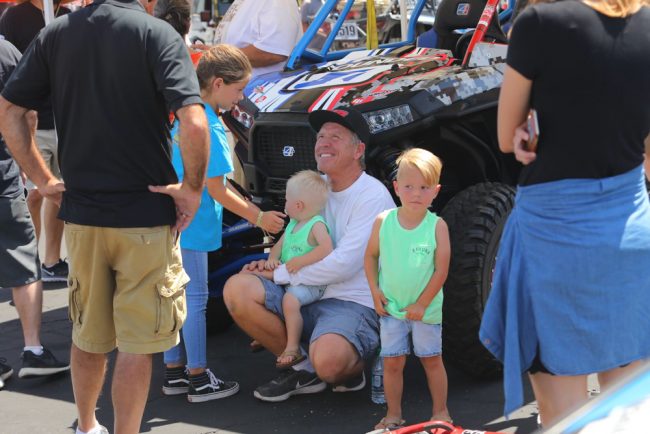 “Joey and Mad Media reached out to us in a time crunch to get some trophies made,” said Marcelo Danze from Assault Industries. “We do a lot of manufacturing in house, so we took it on and had two weeks to make them. I think everyone is really happy with what we turned out. These guys put on such a great show. I cannot believe how many UTVs are out here. There are a lot of young kids out here and I’m super stoked to see that.” 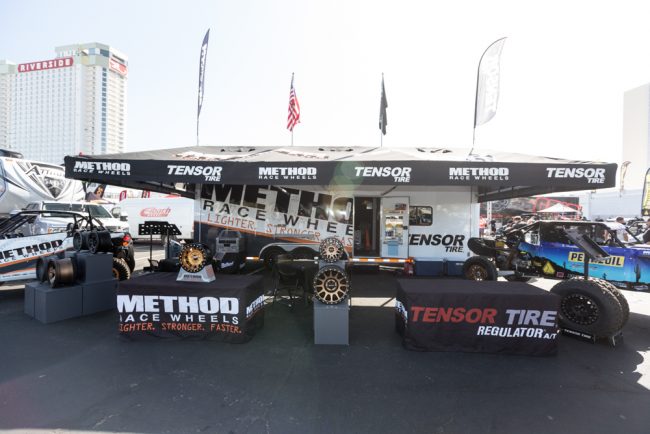 Method Race Wheels created the short course trophy. The custom 401 race wheel is based on the same design given to winners in the Mint 400 Trophy Truck class for the last eight years. 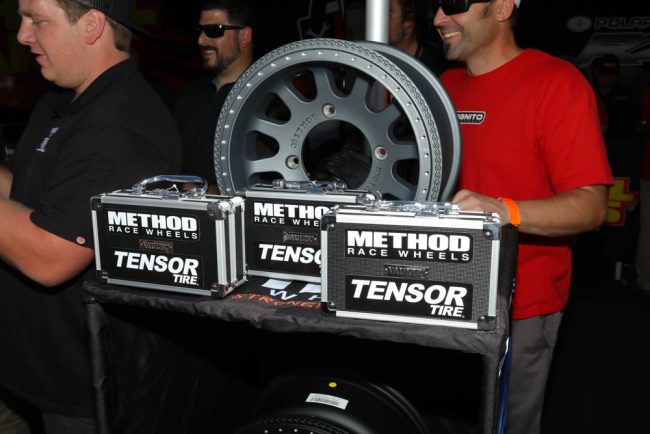 “We thought it was the perfect opportunity to give the short course guys a taste of a real trophy,” said Method Race Wheels’ Steven Bell. “We’re excited to be a part of it. The event has been jammed packed. We have so many people here from so many manufacturers and so many aftermarket companies. At Method Wheels and Tensor Tire, we’re super excited to be part of this program. The events just keep getting bigger and it’s incredible. The level just keeps getting more complex every year.” 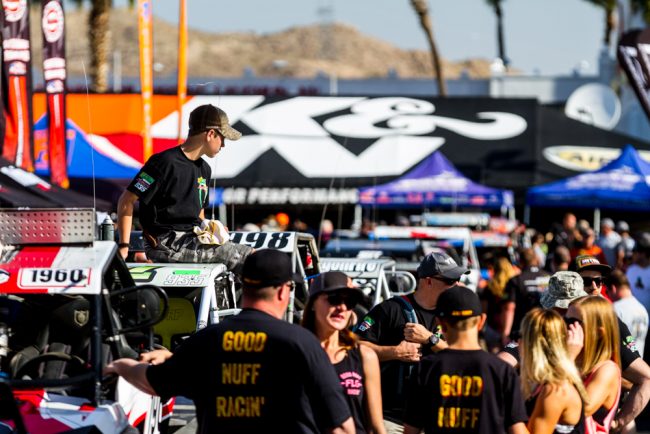 K&N Filters made its first trip to the event and unveiled two new air filter products here. K&N’s Johnny Jumped showed off its Air Charger system for the RZR 1000 and RZR 1000 Turbo. The system features a molded oversized air box and utilizes the XE media that is woven to be more efficient in dusty conditions. They each include a full intake tube and the turbo model has a heat shield. 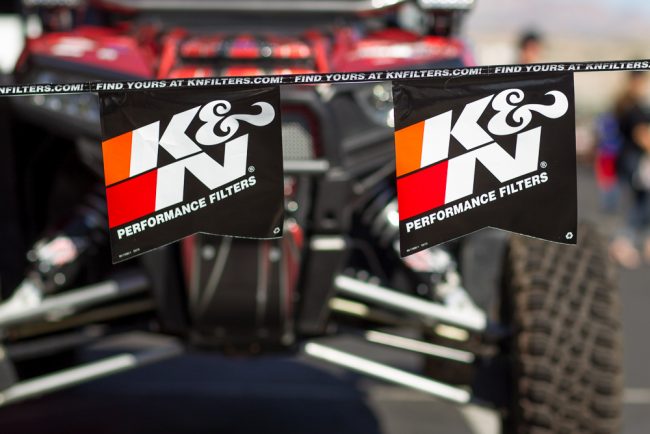 “K&N has been affiliated with the off road industry, the ATV industry and now the UTV industry for many years making cotton, washable reusable, high-flow air filters for these vehicles,” said Jump. “This event is super cool. This is my first year and K&N’s first year at the UTV World Championship and there are over 300 competitors here. I can’t wait to see what goes down tomorrow.” 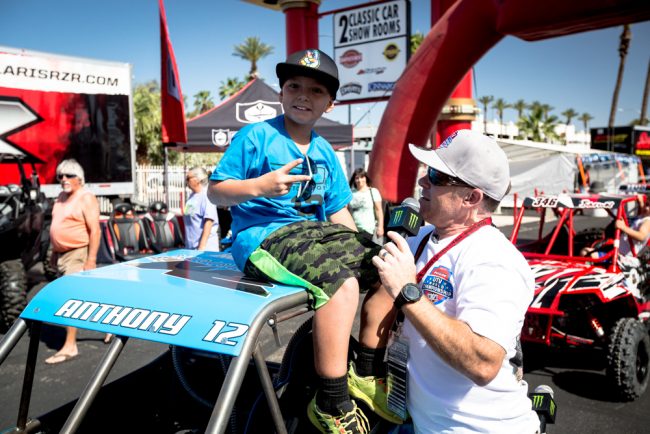 Racers were out in full force checking out the event and mingling with fans. Ryan Laidlaw, who won the Turbo Class desert race last year, is looking for a repeat this year. He was amazed at how the event grows every year.

“We’re excited to be back out here,” said Laidlaw. “Hopefully it plays to our favor again this year. This is an amazing event. It’s good to see everyone out here: the vendors and our fellow racers. The UTV World Championship is definitely the premiere UTV event in any series.” 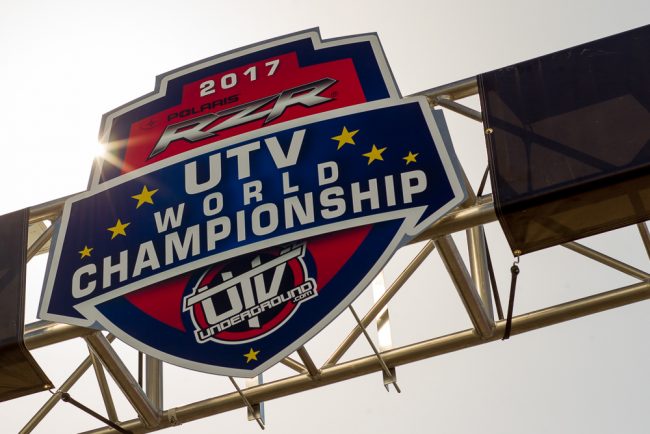 Justin Lambert was also here showing off his new Turbo Class Polaris RZR. Lambert dominated BITD competition last year, winning seven races in the non-turbo class. Though teething problems have slowed him this year, he is looking for redemption this weekend.

“It sure would be nice to go back to back and win two in a row,” said Lambert. “We did a great job last year winning all seven races in the BITD. This year, we’re in a new class so we have a learning curve. We don’t expect quite the same results, but we’re going to go out there and do our best. That turbo has a lot more torque and that Polaris is really putting down some power. We’ve had some clutching issues, but once we get those sorted out, watch out.”

Fresh off winning the King of the Hammers earlier this year, Monster Energy’s Shannon Campbell is looking to carry some momentum into Saturday’s race. Though he’s competing a totally different discipline of racing, Campbell got himself up to speed during a poker run organized earlier in the day. The event allowed racers and fans a chance to pre-run the course and come away with raffle tickets. 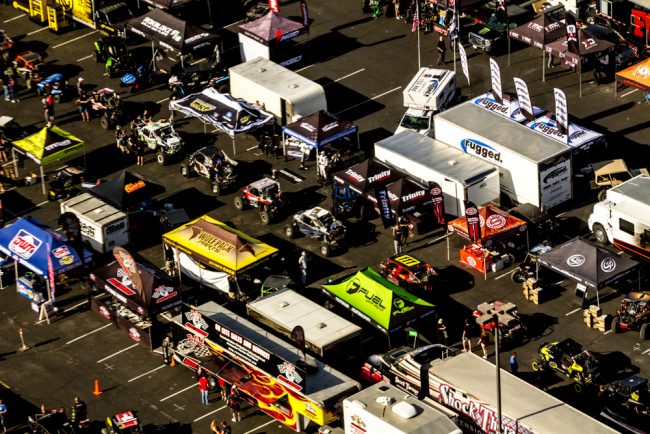 “I’m loving driving these things,” said Campbell. “I may have gotten a little lucky at the King of the Hammers, but these guys out here are the real deal. I think after this race, we’ll have a good idea. We’re going to be on the pipe the whole time here and there is a fine line between breaking out and smoking a belt or tearing something up. We got to do the family pre-run this morning and my kids are starting to get to where they can kick my butt. For me, I needed to get out and see the course. Some of the other guys never really get to go on the race course so it was fun for them.”

A racer of a different feather was here. KamiKaze Chris Day, driver of ElCo on Discovery Channel’s “Street Outlaws” was representing Weld Wheels’ Hiper Brand and Proline Wraps. No stranger to off roading, Day was excited about the event and that season 10 of the popular TV show has been picked up by Discovery.

“My whole background before I got into street cars was motocross,” said Day. “So these are my people. Weld makes the best wheels for the drag racing world, so Hiper being a sister company, I will more than likely have a set of Hiper Wheels on my off-road vehicle. A RZR is about the most fun thing you can have.” 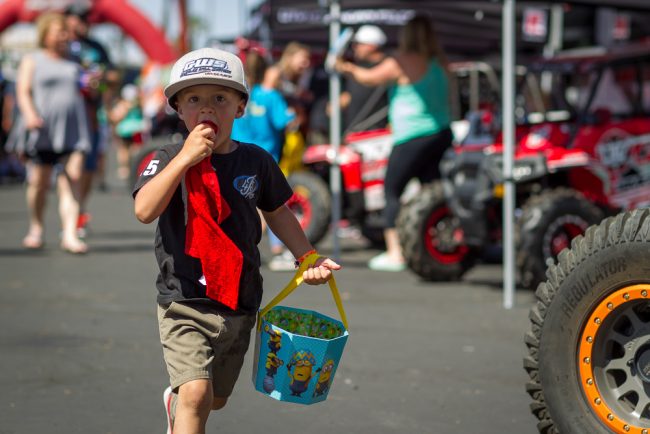 With it being Easter weekend, organizers also had plenty of fun activities for the kids. DiGiovanni’s wife, Camille, along with Amy Quintero, organized an Easter egg hunt for the young racers in attendance. Amy Quintero is the mother of up-and-coming UTV racer Seth Quintero. Casey Piplic, son of racers Ryan and Jamie Piplic, found a golden egg hidden in the Polaris booth and collected a $100 prize. 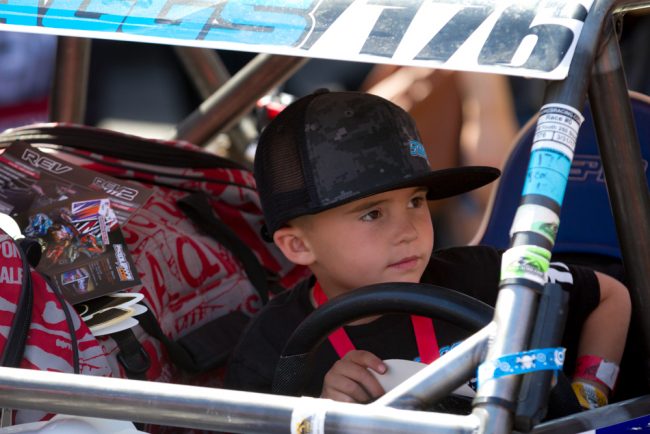 “It was a great success,” said Amy Quintero. “The Easter Bunny was here, the kids were running around and it was a great day. We had Seth hide the Golden Egg over at the Polaris RZR booth. The Piplic twins found it, brought it over to CageWrx, where Seth was displaying his car, and we gave them their $100.”

Ryan Piplic was pleased with organizer’s thoughtfulness in creating an event just for the kids. The Easter tradition was enjoyed by both young racers and fans.

“I think it’s awesome they did this,” said Piplic. “I’m glad they did things to make this a family friendly environment, instead of just making it about the racing. It was nice they made it fun, especially on this holiday weekend.”

Racing for the 2017 Polaris RZR UTV World Championship powered by Monster Energy starts at 6:30 a.m. PDT on Saturday with a motorcycle and quad race. UTV racing starts at 10 a.m. with the desert race, followed by youth racing and the short course race. For information, visit www.utvworldchampionship.com.