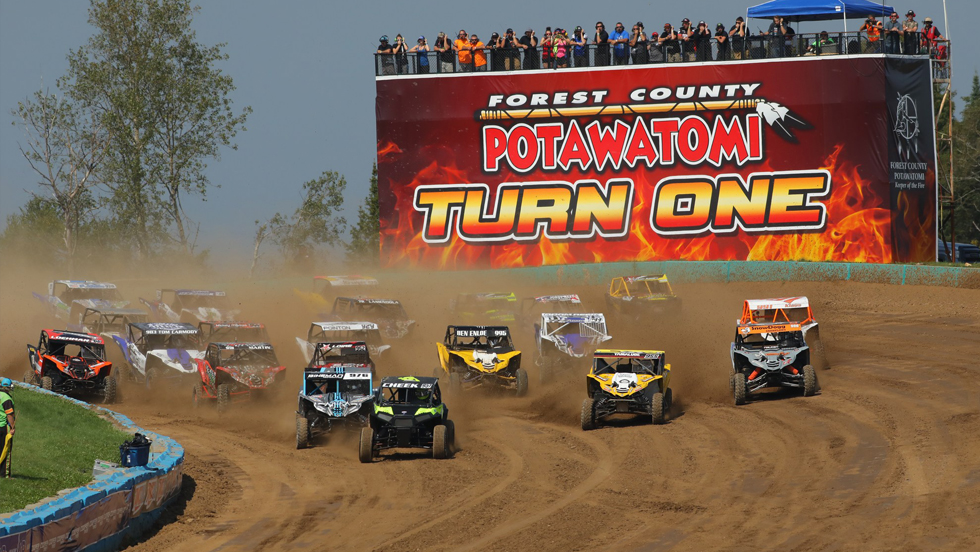 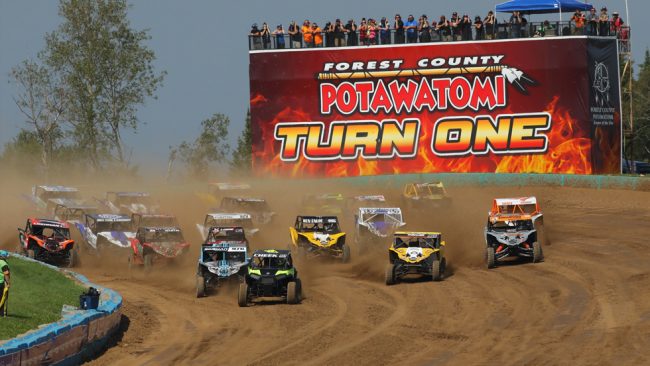 Rodney Van Eperen and Jason Luburgh won the UTV portion of the Crandon World Cup at Crandon International Off-Road Raceway. In what turned out to be some of the most competitive UTV racing this season, Van Eperen finished first in the Pro Modified race, while Luburgh came away with the Pro Stock victory. Both won $5,000 for their efforts.

The event was run as part of the TORC Series weekend at the track. The special non-points events were held on the track’s short course. With nearly 30 UTVs at the starting lines for the 12-lap races, the races thrilled the record 60,000-plus spectators. While the track was muddy on Saturday, Sunday’s racing surface had a significantly wider racing groove with a much lighter cushion. 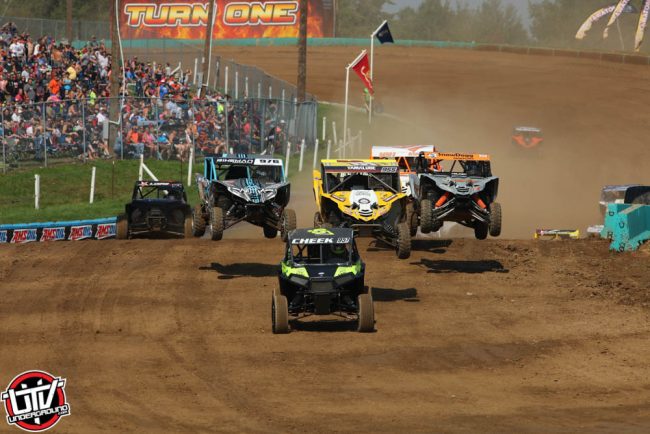 Fresh off his victory in the Pro Stock race, Luburgh sprung early in the Pro Modified race, driving his Polaris to a runaway holeshot. CJ Greaves and Van Eperen were close behind in their Yamahas before a hard crash by Treavis Poynter brought out a caution. 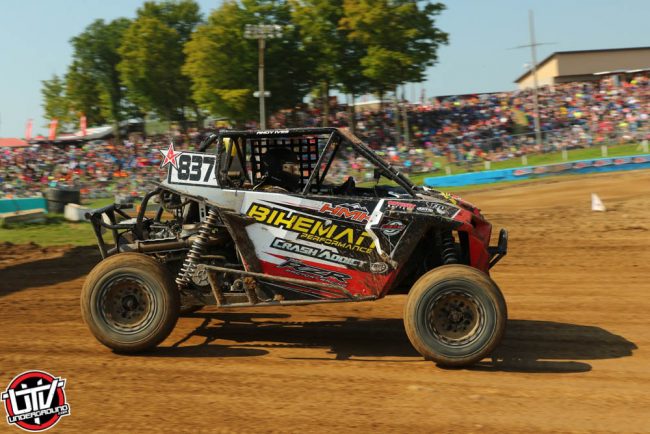 On lap nine, Chaney began falling off due to tire and differential issues. Van Eperen took the lead with Tim Farr in second in his Can-Am. Farr turned up the wick on the final two laps, but Van Eperen used a lapped car as a block in the final turn and went on to victory. Farr finished second, followed by Chaney. RJ Anderson was fourth in a Polaris, ahead of Michael Gilliland’s Yamaha.

“It’s fun to race when you don’t have to worry about points; you can throw caution to the wind,” said Van Eperen. “There was five grand on the line and I wanted redemption after yesterday. This will give us huge momentum going into the final three races.” 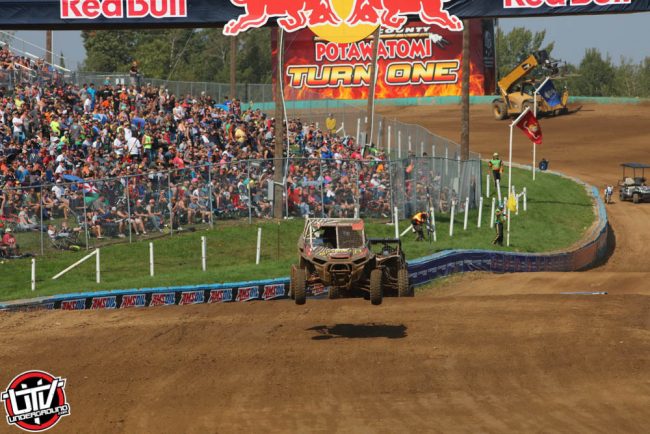 Farr did his best over the last two laps, using the inside line to gain ground on Van Eperen. Though he had momentum on the final lap, the lapped car slowed him just enough to give Van Eperen the breathing room he needed for the victory.

Chaney ran a strong race and looked primed for victory after Greaves’ mishap. Unfortunately, the tire and drive issues slowed him enough that he couldn’t hold off Van Eperen and Farr. Despite that, he still managed to finish on the podium. 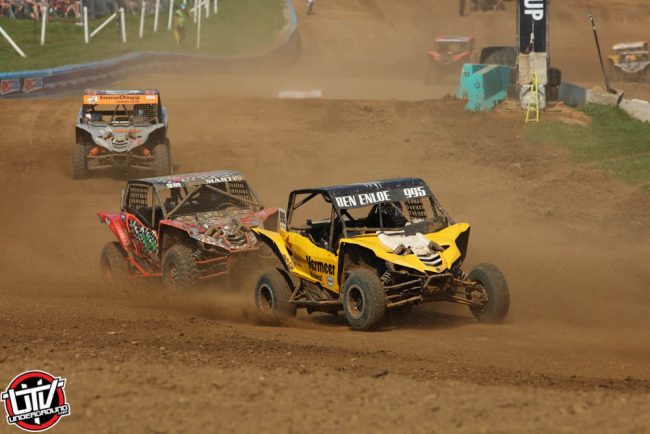 “I blew a front diff and then had a rear flat,” explained Chaney. “I took the lead, but after that on the caution I started to get a flat. Then I heard a big clunk in the front. The diff kept going in and out and I couldn’t hold back Tim or Rodney. They just had too much speed while I was in two-wheel drive.”

The Pro Stock race turned into an all-out brawl. West coast racer, Myles Cheek took the lead at the land rush start, but behind him a battle was brewing. Jake Lunderby took the lead in his Yamaha on lap three, while Hans Ada’s Yamaha and Luburgh were fighting it out for second. 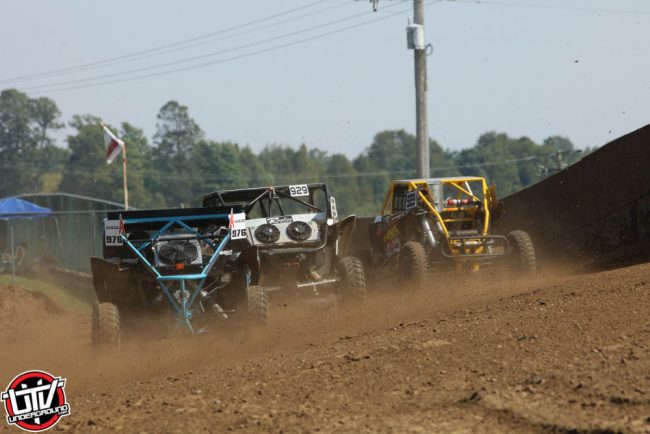 On the restart, Lunderby, Luburgh and Ada fought a tight three-car battle for the lead. Luburgh took the lead for good on lap seven, while Dillon Pointon moved into the battle in his Yamaha, passing both Lunderby and Ada to take second. Ada was third, ahead of Lunderby and the Yamaha of Ben Enloe. 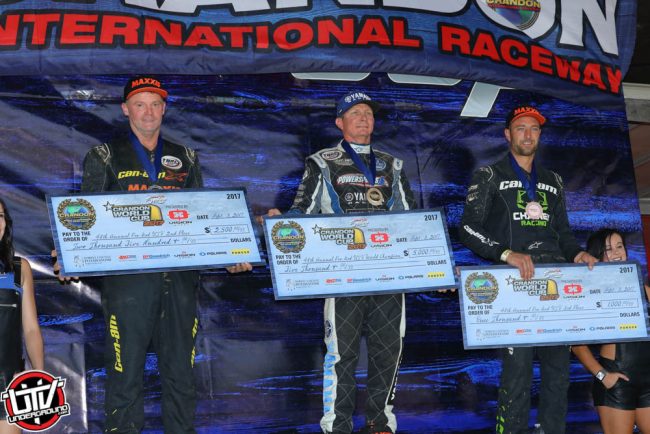 The victory was huge for Luburgh, who has had a challenging season in TORC this year. The team made a last-minute clutching change on his RZR and that, along with running a 30-inch tire, handed him the best car in the field.

“That was unexpected,” said Luburgh. “We’ve really struggled in the stock class this year, but we’ve just been playing with stuff. We relaxed a little and started really thinking outside the box. We ran 30-inch tires today, which I’ve never done before. We used it to gain a little more top end and it worked.” 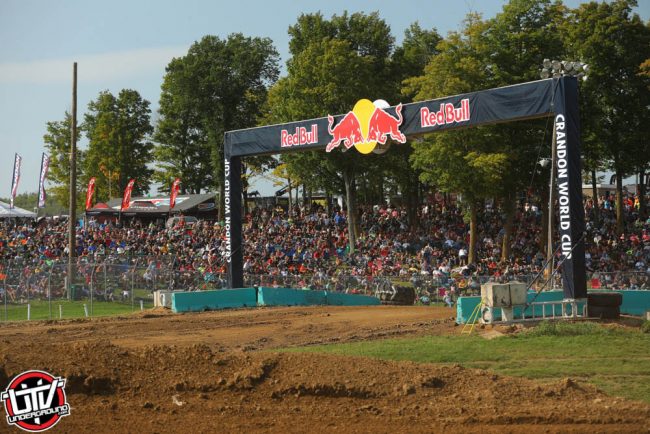 Pointon was also happy with his results. Bad luck has sidelined his efforts at the last few TORC races, so it was a nice boost to the Colorado racer’s momentum.

“This is definitely a confidence booster,” said Pointon. “We’ve been having issues and even though this race wasn’t for points I couldn’t ask for a better result. The top 10 cars were all there, right together. I saw cars five wide at one point. After that restart, it was really bunched up.” 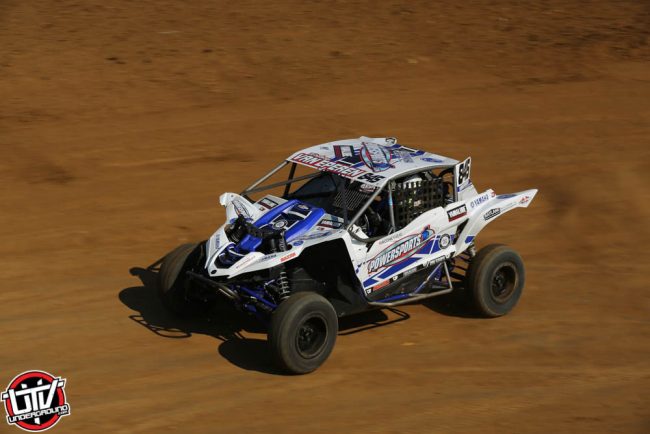 Ada disagreed with the race officials call, but was still happy with the podium. Ada is an open wheel road racer and is usually on the sidelines, coaching Mickey Thomas and running his Pro Lites Truck program, so it was a nice break to get out and race.

“We had some really rough racing and salvaged a third place,” said Ada. “A few things didn’t play in my favor, but I’m still happy to bring home a podium. Thankfully, Mickey brought his SXS out here for the Crandon Cup so I could take vacation and drive. It definitely recharged my batteries to drive my own car and get into the zone again.” 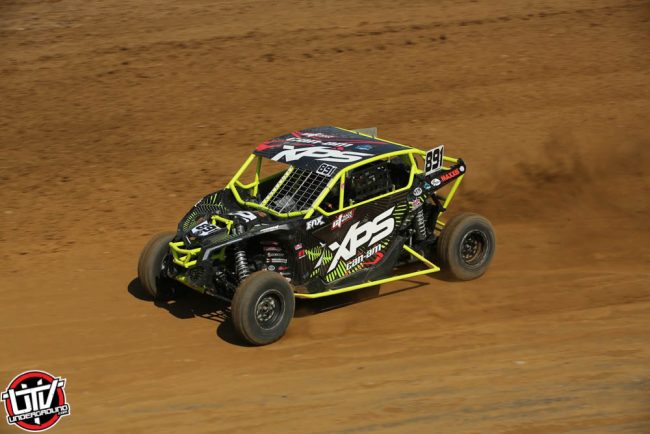 The next TORC race is scheduled for September 23-24 at ERX Motor Park in Elk River, WI. The tripleheader will conclude the 2017 TORC season.