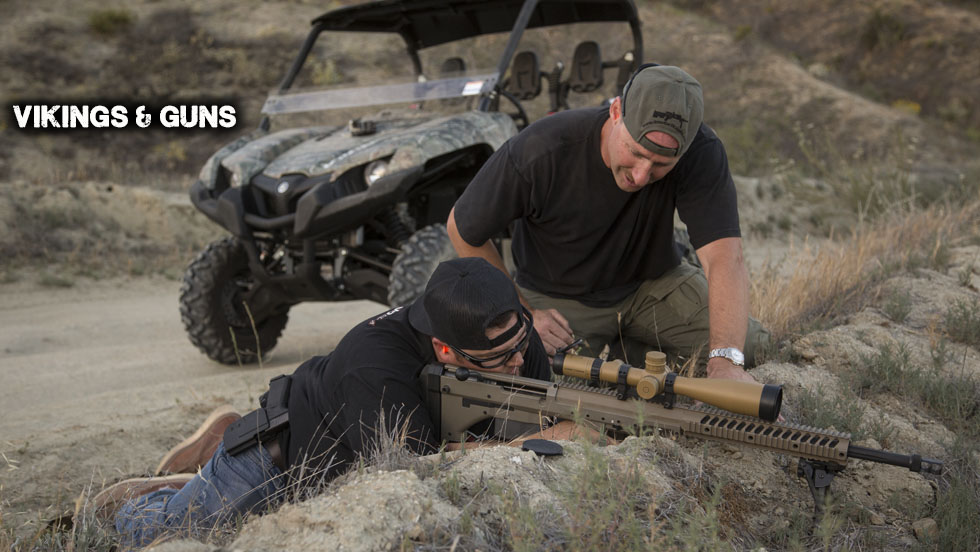 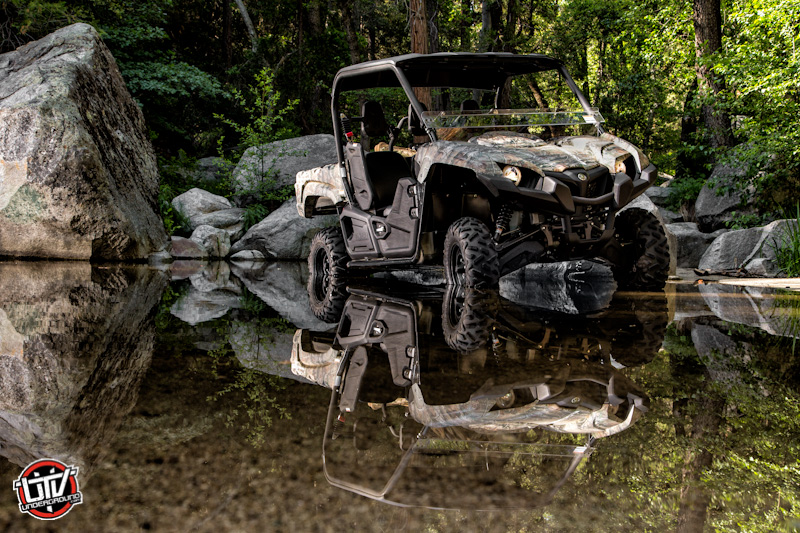 The Yamaha Viking is an interesting machine. Yamaha claims it to be designed for the hard working enthusiast and pins the Viking into the utility segment of the UTV market. Looking at the machine however, we know there is some trail rated usefulness in that big wide platform. So when Yamaha told us we could hang onto our viking we vowed to put it too good use, not just as a work horse around the ranch or on video productions, but on the trails.

We got our Viking a couple of months ago and since we picked it up we have began building ideas around how we plan to modify it and what we plan to turn it into. We have decided to turn it into a simple yet functional hunting rig but for now we wanted to get a chance to run it as is so we can see just how big of a difference our mods make once we install them. Our schedule has been crazy lately but we have been desperately trying to do a few things before it got too hot. One was get our Viking out on the trail and two was to get together with our buddy Kent Kroeker to go do some long range rifle training. Well, the stars aligned and a date was picked for us to not only go do some shooting with Kent but to use our Viking in the process!

The plan was made to take our 2014 Yamaha Viking to Bee Canyon Truck Trail outside of Hemet, CA in the San Bernardino National Forest. Bee Canyon is a popular location for Southern California off-road and gun enthusiasts who like to mix a little off-road riding with target shooting. UTVUnderground members often frequent the popular trail and for this operation it was the perfect area to enjoy some fun trail riding and get a good education on long range rifle shooting. In addition to Kent and myself, we also had the Mad Media crew come along to make sure we could capture our fun via the camera lens! In the coming weeks we will drop our Yamaha Viking SHAKEDOWN video from this awesome ride.

So we all know what the Viking is by now, if not you can read up on it HERE, but who is this Kent Kroeker guy? Kent Kroeker is a Marine Corps Officer, a Baja 1000 off-road racing champion and the owner of KORE, an aftermarket suspension company known for its quality products for the Dodge line-up of Ram vehicles. Kroeker is an educated war veteran, a strait talking, modern day bad ass. In short, Kroeker is the guy you want on your team, the guy you want to go to battle with and the guy you want in your vehicle when you go to take on an off-road adventure of any kind. Kent Kroeker is also a guy you call on to teach you how to handle and shoot the ultimate weapons. Kroeker possesses the skill to kill a mile away and he was willing to come along, learn a little about UTVs and teach us a lot in regards to what it takes to hit a man size target placed over 10 football fields away.

We all would meet at the bottom of the Bee Canyon Truck Trail around 10am. The trail head is large enough to fit most trailers but can be busy so we always recommend bringing along your smaller trailers because you never know how full it is going to be with other off-road enthusiasts. We also recommend checking the San Bernardino National Forest website to verify that shooting and the trail itself is open to recreation before heading out! Along with the UTVUnderground Viking, I packed my .40 Cal Glock 23 and 12 Guage shotgun for fun. Matt Martelli of Mad Media brought along his high powered .338 Lapua Desert Tactical sniper rifle w/ Schmidt & Bender scope and Kent Kroeker packed his AR-10 Smith & Wesson and a bunch of other guns he doesn’t really want us talking about! (All are CA legal). Along with a ton of ammo, Kent also brought along his AR500 Steel E-Type man-size target. In total we had about 300 lbs of guns and ammo to load into the back of our Yamaha Viking and once in the bed we stil had room to spare!

Once loaded we set out to explore the trail, while shooting was our ultimate goal, we still wanted to see what the Viking could do when loaded down with a bed full of whoop ass! haha So we made way up the trail exploring the area and keeping out eyes out for the ideal spot to set up our target and shoot from. Kent continuously would ask to stop to use his range finder to size up potential locations. He was looking for something in the 800 meter range (2624 ft.) which he felt was a good challenge for me as a first time long range shooter. Along the way we talked about the weapons we were hauling, the UTV world itself and just how awesome it was to be off-roading legally in the San Bernardino National Forest in Southern California! Bee Canyon is a great place to get out with friends and family to go ride and shoot. While it tends to be warm during the summer months, during the winter it is a ton of fun. For street legal vehicles you can ride right into Idyllwild, CA via Pine Cove which is super cool. There is also an awesome water crossing just before you reach the top of the trail which is always a spot we love to stop, have lunch and just hang out enjoying the amazing mountain air. We don’t have many places like this left in California that we can enjoy in an OHV setting so we ask that everyone respects the law of the land, pick up after yourself and pick up after those who may have left some trash behind.

After a quick stop at the top of the trail to take some photos we decided to head back down the road to size up the spots Kent thought would be best for our long range shooting lesson. I felt it was only fair after driving the Viking up that he get to drive it down so he jumped behind the wheel and after a quick drive through the water we charged on back down the trail. This was Kent’s first time behind the wheel of a UTV and he was pleasantly surprised at how capable this machine was despite the heavy load we were carrying. Not only was this 3 seat wide Viking roomy with only 2 of us in there, it drove really well. He commented about how much he noticed and enjoyed the Electronic Power Steering (EPS) and loved that the 4X4 worked extremely well especially for pulling the heavy machine through the tight switch back corners. Another comment Kent made was how comfortable the factory seating was. He said one thing many vehicles he has driven fell short in was the design of their factory seats when claiming the vehicle as an “off-road” rated machine. The feature he liked most about the seats was the lumbar support. As we drove over the bumps the seats, like the suspension, are a shock absorber for our bodies, Kent loved the way the factory seats supported his back as we traversed the rough and rocky terrain.

We stopped at a perfect location which placed the target approx. 900 meters from where we would shoot. Now to put things in perspective, we would be shooting a life size target at over 10 football fields away, downhill with a cross wind. This is not easy to do, well unless of course you are an expert shooter like Kent Kroeker! With our target set and the area cleared my training began. Kent took the guesswork out of how to set up the scope by doing it for me once he calculated distance and wind. Its a geometric equation to figure out exactly how your bullet is going to hit its target at these distances, it goes something like this: ([Bullet Weight]*30)/(([Twist Rate]/[Cal])^2*[Cal]^3*[Bullet Length]/[Cal]*(1+([Bullet Length]/[Cal])^2))*([Velocity]/2800)^(.333)*(([Temprature]+460)/(519)*29.92/[Barometric_Pressure]). Understand it? Me either! But Kroeker does so he dialed me in and took his position at the spotters scope while I laid on my belly and sized up the target through the guns scope. I steady my breathing, exhale then hold and once Kent gives me the all clear and squeeze. First shot buzzed the head, but I blame that all on me waiting for this gnarly kick when in fact Matt’s .338 Lapua Desert Tactical rifle was smooth as butter! Now I knew what to expect so I tucked in tight and sized the target back up. Once in the cross hairs, Kent gave me the go ahead and BOOM, target hit! From that moment on I was hooked!

We spent the next hour taking turns sending lead down range and seeing just how solid we could hit that solid steel target. What was even cooler was looking through the spotters scope when Kent was shooting and being able to actually see the bullet traveling through air, its almost surreal. The experience was awesome and learning the power of these weapons at this distance was a real education. I couldn’t imagine hitting a moving taget at that range or doing this under the pressure of war! We finished the evening out with this fun session of taget shooting and then just as the sun settled behind the mountains we made our way back to the trail head. Not only did we have a ton of fun shooting, we thoroughly enjoyed driving and using our Viking. It was the perfect machine for this situation and it really got us excited about modding this Yamaha out!

I want to thank Kent Kroeker for taking the time out to ride and teach. We had a blast working with him. I also want to thank our team at Mad Media for coming along to shoot photos and even a little video so we can share this awesome day with you via a Yamaha Viking SHAKEDOWN video! Stay tuned for that!